Home » Informational Guides » Can You Freeze Tortillas? Your Questions Answered

Freezing food is always difficult. The freezing isn’t so much the issue but the defrosting. Even if something seems to freeze well, will it be okay once it’s defrosted?

Contents show
How to Freeze Tortillas
Step 1: Separation
Step 2: Arrangement
Step 3: Freeze!
How to Defrost Tortillas
On the Countertop
In the Microwave
In the Oven
On the Stovetop
Conclusion
Related Posts:

Tortillas are difficult as foods that are heavy in carbohydrates usually freeze well. For example, bread is definitely great for freezing but that’s only if you’re going to toast it afterward.

The answer is yes, you can freeze tortillas. But only if you intend to toast or fry them afterward. Otherwise, they will defrost and become soggy.

This is because frozen food takes on water which it absorbs as it defrosts. This can potentially change the texture, consistency, and taste of the food.

Be careful of freezer burn on your tortilla dough. An airtight container also works. Store bought tortillas tend to freeze better due to their preservatives. However, unopened flour tortillas or a homemade flour tortilla have similar freezing properties. 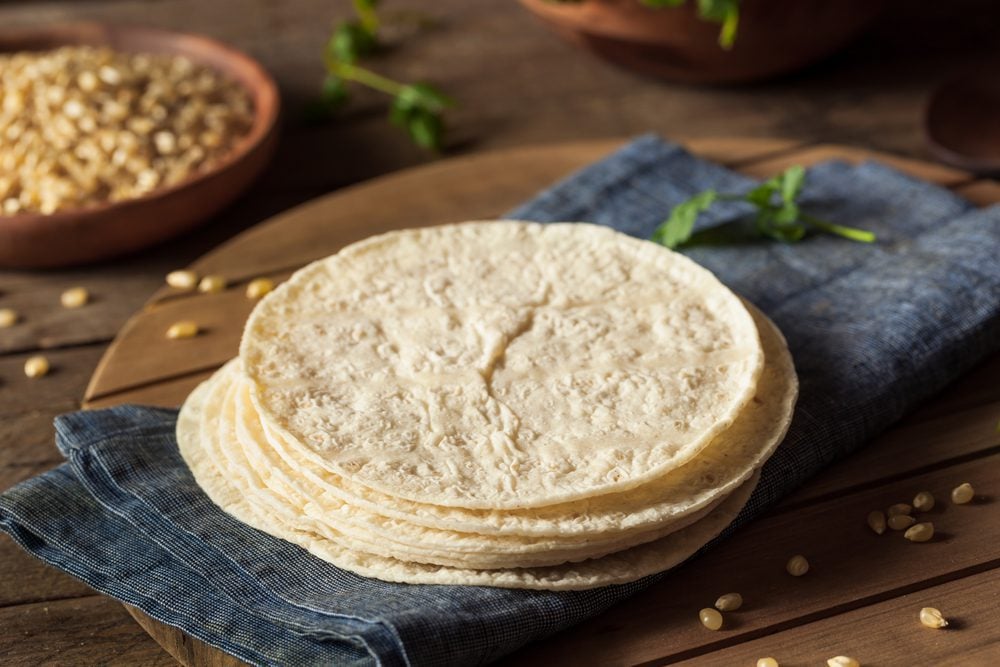 How to Freeze Tortillas

Freezing food might seem simple. But when it comes to tortillas, and a lot of other foods, there are some important steps that need to be followed.

It’s not a simple case of just throwing a packet of tortillas in the freezer.

So, here’s our step by step guide to freezing tortillas.

This is a useful step if you’re going to be freezing a stack of tortillas.

So, to make sure the tortillas don’t stick together, place a piece of parchment paper between each one. This will stop them from sticking together. This will make them last much longer and you won’t end up wasting any food.

One weirdly important step to freezing tortillas is making sure they are placed in the freezer properly. If the tortillas are folded or just uneven on top of some other food, they will freeze in an odd shape.

Even when they then defrost, they won’t go back to their original shape. This is annoying and can interfere with whatever dishes you want to make with your tortillas.

Now you can actually freeze the tortillas. As mentioned above, freezing something that is heavy with carbohydrates is a relatively simple process.

Tortillas will generally last around 8 months in the freezer.

How to Defrost Tortillas

As mentioned before, defrosting is the more difficult side of freezing foods. It can be difficult to make sure that the food is the same as before.

There are actually a few different ways of defrosting tortillas. They might seem a little delicate but they are actually quite resilient. So, here are the best ways to defrost tortillas.

Perishable foods such as dairy products need to be defrosted in the refrigerator. If they are defrosted at room temperature or warmer, they will likely curdle.

Although tortillas do go bad, they are fine to defrost on the countertop. You can, of course, defrost them in the refrigerator. But this will take longer and isn’t 100% necessary.

But, even then, the tortillas will be quite soft and need to be heated or recooked.

If this seems like too much of a process for you and you have access to a microwave. You can easily defrost tortillas. Turn your microwave to the “defrost” setting and place the tortillas inside for about 30 seconds.

If they are still frozen, put them in again for another 30 seconds. Repeat until they are defrosted. As the microwave uses heat, the tortillas will be a little crisper than when left out at room temperature.

Again, the best option is to defrost the tortillas individually. If they are defrosted in a stack, they might become soft and stick together. The tortillas in the middle and the bottom might also absorb the water from the tortillas above.

It’s not the most common option considered but you can defrost tortillas in the oven. If you think about it, there are plenty of foods that can be cooked in the oven from frozen. So why not use it to defrost food?

As we’ve said, tortillas are pretty sturdy foods. So they won’t be altered too much by the heat of the oven. This will even be a better option as they will dry and crisp up due to the heat. Unlike in the microwave, they will be heated more directly and more evenly. So they will be cooked rather than heated.

You can then leave the tortillas in the oven to warm up or even longer for them to crisp up. Then you can break them into tortilla chips.

If you eat tortillas often, chances are you cook them on the stovetop. It will obviously take a little longer but you can cook them from frozen. If you fry them (or cook them directly on the stove, if you’re bold) then the heat will dry out the moisture.

The tortillas will defrost very quickly and then cook very quickly too. So you need to be prepared. Don’t step away from the stovetop. Make sure you are always paying attention.

So, there you have the best ways to both freeze and defrost tortillas. This guide, and all the tips and tricks within, should give you all the information you need for freezing and defrosting tortillas.

Not a lot of foods can freeze well. And even fewer can be defrosted well. But tortillas do well in the freezer. They can last a long time and can be cooked from frozen. They can be defrosted in several different ways. And they aren’t too delicate.

So, go ahead and freeze a big stack. So you can just take out a few whenever you feel like you want one.