This super-simple chicken marinade recipe only needs a couple of pantry staples and some fresh ingredients. Then you need 30 minutes to make a delicious marinade that will give your chicken a zesty kick.

Contents show
The Role Fat Plays
How Salt Changes Chicken’s Protein Structure
Don’t Leave Out the Aromatics
The Many Benefits of Sweeteners
A Caution About Using Acidic Ingredients
Is It Okay to Add Alcohol?
How many marinades Should I Use?
How Long Should I Marinade Chicken?
Customizing this Marinade
Side Dish Suggestions
FAQ
What’s the Time Frame for Marinading Chicken?
Should You Marinade Chicken in the Refrigerator?
What Container Do You Use to Marinade Chicken in?
Balancing the Acid in Your Marinade
Chicken Marinade
Equipment
Ingredients 1x2x3x
Instructions
Notes
Nutrition
Related Posts:

The fact that chicken becomes dry and less tasty when overcooked is no big culinary secret, especially when your grill chicken over high direct heat. This condition alone can render chicken’s taste less flavorful and dull. An easy chicken marinade will infuse a lot more flavor into your chicken and make the meat much more juicy and tender.

The following chicken marinade is also very adaptable with different cuts such as thighs, legs, lean breasts, wings, and half-pieces. When creating an impactful marinade, I usually include ingredients in the following categories: salt, oil, sweetener, aromatics, and acid. This will ensure the meat is fully brined to deliver a delectable flavor with tender, juicy bites. I like using the following marinade ingredients: kosher salt, olive oil, garlic, soy sauce, honey, chopped parsley, and lemon juice. But as you’ll see later, it’s highly customizable. 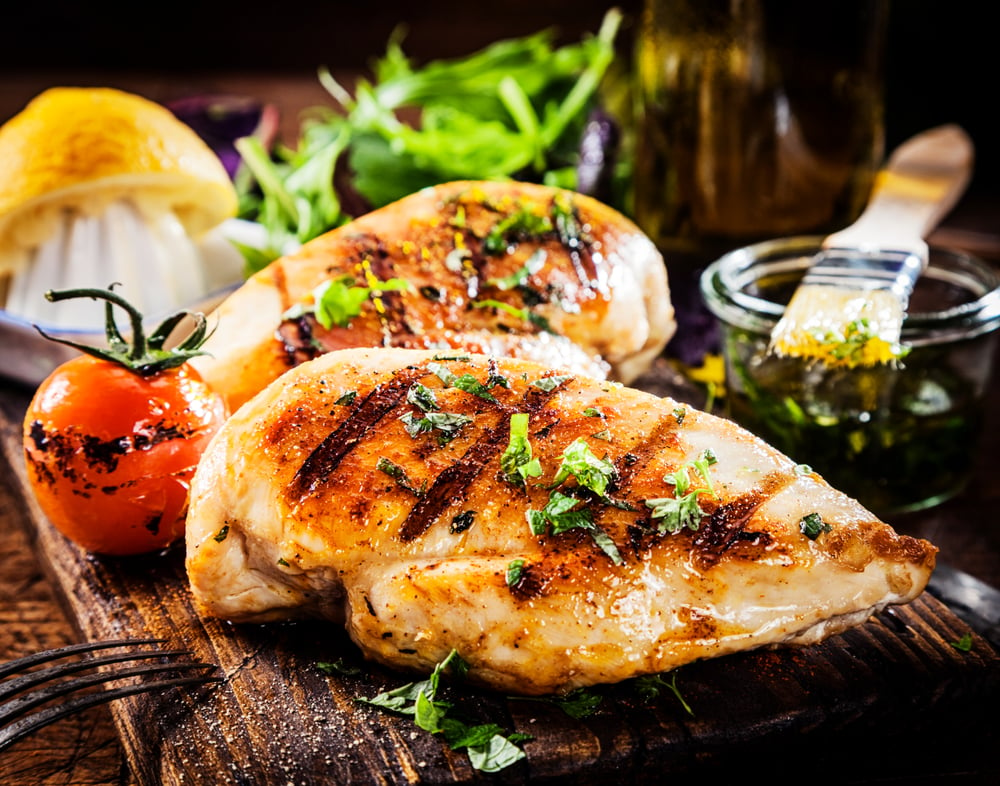 Fat carries a vital role in chicken marinade. It helps add texture, flavor, and moisture to your chicken. Fat also helps deliver the flavors of other ingredients like spices, herbs, and aromatics deeper into the chicken meat. It also allows the grilled chicken marinade to adhere to the chicken better.

And it serves as a protective buffer against direct heat from the grill, stovetop, or oven, which also helps the marinating chicken stay juicy and tender. Fat doesn’t just have to come from chicken, as some pieces, like marinated chicken breast, don’t have much fat, but it can also come from other forms, such as butter, oil, or even Greek yogurt. Each of these ingredients contributes its own unique texture and flavor.

In this recipe, the oil will dissolve the fat-soluble flavor components in the mustard, lemon zest, and black pepper (capsaicin) to disperse evenly on the chicken’s surface. You can also use an oil with a more neutral taste, such as avocado oil or olive oil, which have high smoke points during cooking.

Try adding olive oil if you’d like a fruity, bolder flavor. This oil goes well with Mediterranean and Greek dishes, like Greek chicken.

Sodium chloride, more commonly known as “salt,” behaves as a brine while loosening the meat’s protein structure, which helps the cooked chicken retain more salt water. Another benefit to the looser muscle fibers in the meat is that it’s easier to chew (more tender). The result is chicken that’s much juicier and better seasoned.

I also like to include fermented soy sauce since it has a high level of glutamates, a compound that enhances the earthy, umami flavor. Also, you can substitute Worcestershire sauce, which has a unique combination of molasses, vinegar, garlic, tamarind extract, anchovies, and seasonings to boost a fantastic flavor.

Don’t Leave Out the Aromatics

The best marinades also include aromatics that round out the meat’s flavor profile while giving it an aroma that develops intensely during the cooking process. For example, minced garlic (or garlic powder) leaves a potent sulfurous flavored compound known as allicin, along with fat and water-soluble properties. These components coat and infuse into the meat’s exterior. When the meat makes contact with heat, its raw taste becomes more mellow giving way to a more caramelized flavor.

The Many Benefits of Sweeteners

With the best chicken marinades, the flavor isn’t intended to be too sweet, but adding a touch of honey encourages better browning via the Maillard reaction and caramelization while cooking. As a result, you get better flavor and color development.

A Caution About Using Acidic Ingredients 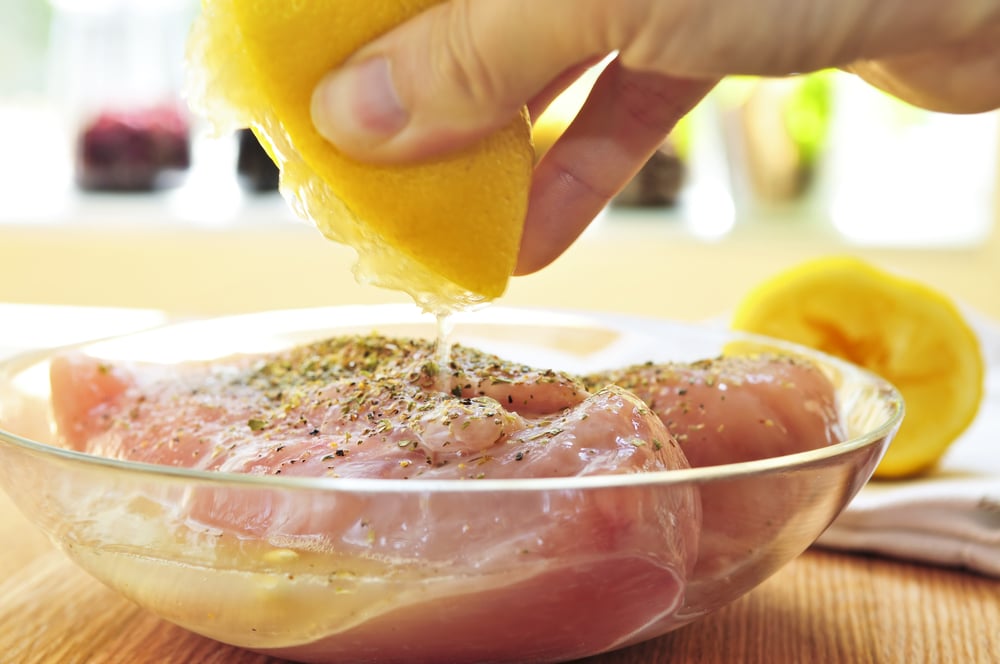 The lemon juice’s citric acid adds bright flavor notes to the savory marinade. The acid also helps weaken the meat’s surface proteins, making it more tender in the short run. However, allowing the acid to soak into your chicken for more than an hour can cause problems, making the meat mushy and virtually inedible.

To increase the aromatic value, I also enjoy adding lemon zest, which powers up the citrus oils in the marinade while giving it more of a citrus aroma. You can also use lime juice or if you’re looking for something a little spicier with a fermented flavor, try red wine, rice wine, balsamic, or apple cider vinegar instead of citrus.

Is It Okay to Add Alcohol?

Alcohol can work well as an option that intensifies the flavors in your marinade. Ethanol is a potent solvent that quickly helps flavoring agents penetrate the chicken meat’s interior. A tequila lime chicken recipe would be a great example of how this works. However, the time and amount of alcohol used are vital. Using too much or cooking too long will likely dry your meat.

Also, the flavor of the alcohol plays a significant role. Spirits like red or white wine, tequila, or rum will leave their signature fermented flavor fingerprints on the chicken.

How many marinades Should I Use?

Add ½ cup of marinade to coat the meat for each pound of chicken. To ensure the food is evenly saturated, flip the dish every 15 minutes in a baking dish or use a plastic bag to take out the air. You can easily modify how much marinade you’re using. Use the guideline of 1 lb. chicken = ½ cup marinade.

Using boneless skinless chicken breast is an excellent option since their mild flavor pairs well with a marinade. Dark meat, such as chicken thighs, drumsticks, and wings, can also be used. However, remember that the fattier skin will retain more of the marinade’s flavor than the chicken meat.

How Long Should I Marinade Chicken?

As this recipe uses acidic lemon juice, you want to marinate chicken for less than 30 minutes and no more than one hour. Remember, marinated in acid for too long will become dry and mushy. It can also turn your chicken white, making it look cooked.

While cooking protein using acid in ceviche is good, that isn’t the case with chicken. You can also elect to marinate your chicken for 24 hours without the lemon juice, then marinate with lemon juice 30-60 minutes before it’s time to cook. 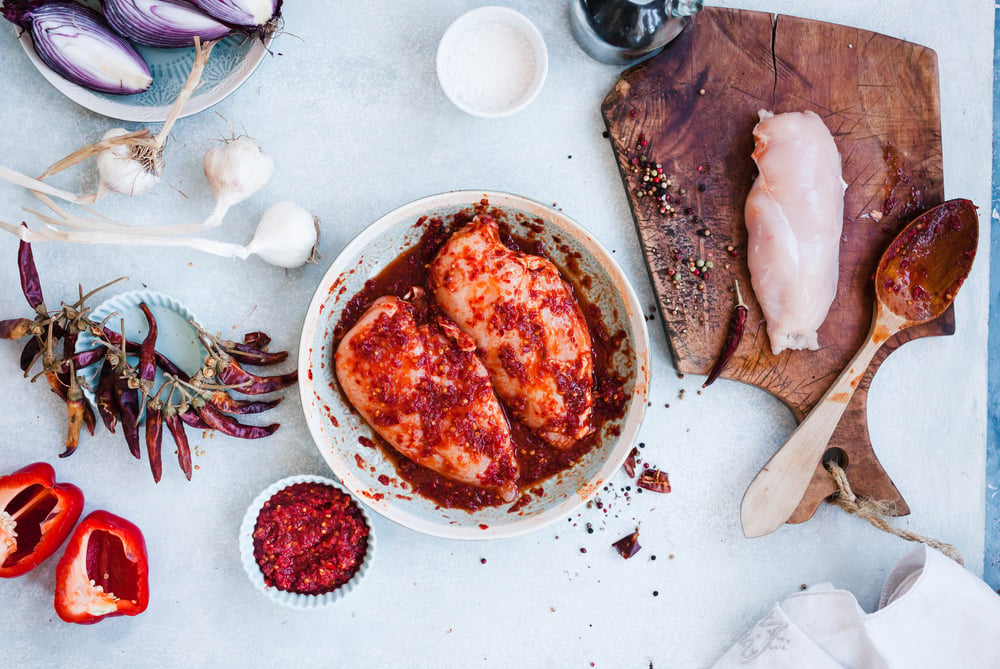 If you wish to switch things up with different tastes, you can add unique herb mixes, soy, savory and sweet, peppery fajita, or spiced Thai curry, to name a few.

Because of the acidic lemon juice in this recipe, you want to soak the chicken for no less than 30 minutes but no more than 60. You can always add the lemon juice during the last hour of marination if you plan to marinate overnight.

Should You Marinade Chicken in the Refrigerator?

Absolutely! The refrigerator is the safest way to marinate raw chicken, even for a short time. If left on your kitchen counter, the salmonella bacteria will rapidly multiply if left in temperatures between 40-140ºF.

What Container Do You Use to Marinade Chicken in?

Balancing the Acid in Your Marinade

Acidic ingredients such as lemon juice, buttermilk, and vinegar are typically used in many marinades. However, too much can make the marinade too acidic and reduce the chicken’s natural pH. Over time, the muscle proteins will start to pack together, thus squeezing out the needed moisture. The best way to prevent this is to use a smaller amount of whatever acidic ingredient you use. Don’t use over 25 percent that’s listed in a marinade recipe. You can also marinate the meat for a shorter time if it’s under 60 minutes but over 30. 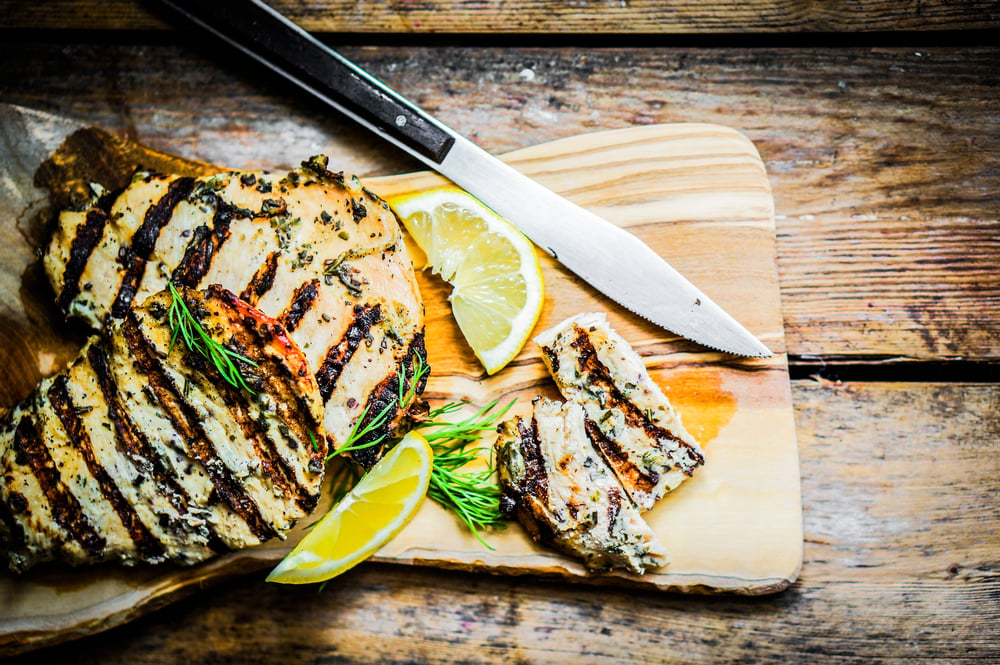 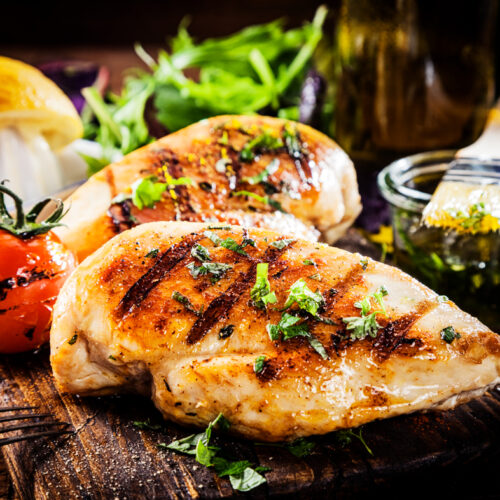 Marinating Ahead: You can marinate your chicken up to 24 hours before cooking, but delay adding any acidic ingredient like lemon juice until 30-60 minutes before cooking. Chicken pieces to Use: You can use chicken thighs, breasts, wings, quarters, bone-in pieces, chicken tender, and legs. Recipe Yield: One cup of this marinade flavors up to 2 lbs. of chicken. Making it Gluten-Free: Use gluten-free coconut aminos or tamari as a substitute for soy sauce. Making it Paleo: Instead of honey, use pure maple syrup. Making it Keto: Instead of soy sauce, use coconut aminos. Use erythritol or cut out the honey for a healthy chicken marinade.

Calories: 233kcalCarbohydrates: 5gFat: 5g
Keyword Chicken Marinade
Tried this recipe?Let us know how it was!