If you’re fed up with your old chowder and corn soups, it’s time to treat your taste buds to something new and invite some variety into your life! However, it can be quite difficult to pick one out of the thousand kinds of soup out there.

How about chicken pho? Don’t worry if you don’t know how to prepare it; we’ll walk you through every step of its preparation.

Despite pho — pronounced as “fun,” not “faux” — being relatively new when it first arrived in Vietnam in the 20th century, the dish swiftly gained popularity and is currently regarded as the national dish of the country.

Pho is just as simple as other chicken noodle soups but with a different spice and aromatic combination.

This soup pairs well with various Vietnamese herbs that go in other prominent dishes of the cuisine. Grab some fresh chiles, Thai basil, ngo gai, lemon, and bean sprouts — along with the other ingredients mentioned below — from your nearest grocery store, and you should be ready to go.

Some claim pho is a by-product of Chinese food, while others say it came from the French beef stew known as pot au feu.

People also say that there were too many leftover cow bones due to a booming beef market at the end of the 19th century during the French colonial era. The Vietnamese then used the bones to produce nam dinh soup — the first-ever pho — which became quite popular in Hanoi.

Regardless of where it originated, pho became a well-liked street dish in Vietnam. Pho has evolved and become more widespread, encompassing several variations with different kinds of meats and methods of preparation.

People who fled the northern regions of Vietnam after it was split up brought the dish with them, and eventually, a southern variation of it started being made.

Hence, the bowl of pho you receive in the North of the country, where the dish first appeared, is not the same as the one you’ll find in the south.

Pho nam, the southern variation, has a robust broth, delicate noodles, and a wide range of herbs. Although beef pho is the classic dish, you may also cook chicken or vegetarian pho.

Some people believe that a clear broth is a crucial component of pho, but some experts disagree and believe it doesn’t necessarily matter. What matters is the flavor.

A slightly hazy broth with killer flavor is always preferable to improperly cooked soup. Clarity is lovely to have but not necessary.

The Spices and Aromatics for Broth

The aromatics and spices you choose to give your broth its distinctive pho flavor are crucial. We recommend roasting the ginger and onion to enhance the taste.

Star anise pods are also a critical flavoring agent that distinguishes pho from other soups and makes it easy to identify as pho; this is also true with beef pho.

How to Use the Chicken for Pho

Most of us used to eat skinless white meat as children. But, after growing up, we realized that darker, fattier chicken flesh is the way to go. Use only shredded chicken of the highest caliber for this dish, preferably organic. For simple consumption, we advise chopping or shredding the chicken.

How to Properly Season Pho

The “proper” method to season pho has caused heated debates: Is it permissible to add sriracha and hoisin?

Many people claim that the commercialization of ethnic food in American restaurants or the difficulty in locating fresh traditional Vietnamese ingredients — which give Vietnamese chicken pho soup a more genuine flavor — in America is to blame for the inclusion of these sauces in pho.

We believe people should be free to eat their food in whichever way they like. We prefer to consume the soup in its original form while dipping pieces of the meat into a plate of sriracha and hoisin sauce. Both of these sauces are available on the side of this soup. You can also add soy sauce for taste.

Pho is highly nourishing. It’s a delicious carrier for bean sprouts and nutrient-dense herbs, along with rice noodles and hearty bone stock.

Rich bone broth in the soup has several health advantages for your hips, knees, immune response, and digestive tract.

Pho also has an average caloric range of 350 to 500 calories based on the size of the serving and the amount of meat or fish sauce you add. Moreover, pho is a fantastic source of protein, but to reduce your consumption of saturated fat, use lean meat or vegetables when it comes to protein.

Frequent consumption of foods filled with saturated fat can elevate your cholesterol levels, increasing your risk of heart disease. Compared to beef, chicken is leaner.

Finally, there are several medicinal spices in pho, such as coriander and anise. This is the reason why chicken pho is used in treating people suffering from a cold in Vietnam.

Pho is flavorful with a pleasant scent, and the beef or chicken broth is mildly seasoned.

The scent of pho will catch your attention right away. Moreover, bean sprouts give it a lovely crunch.

The flavor of basil permeates the broth’s rice noodles. The soup has a fiery, salty, lemony, and sweet profile. It all works pretty nicely together.

Your selection of meat, the garnishes, and the ingredients all have a significant impact on the flavor. If you’re making pho at home, you can constantly adjust what you throw in it.

Both beef and chicken pho share the same components save for the actual meat — a plate of pho includes rice noodles, meat, fresh herbs, chili sauces, the soup, vegetables for garnish, seasonings such as pickled garlic, and lime juice.

The flavors of chicken pho are the ideal harmony of sweet and salty from the chicken flesh and broth, acidic from the lemon zest, spicy from the chili sauce or chili pepper, and gritty and aromatic from the herbs.

On the other hand, the beef chunks in beef pho are often uncooked and dropped into the cooking stock until it achieves the desired level of medium rareness, compared to chicken pho, which includes pre-cooked chicken.

Like beef stock, beef pho often tastes smoother and nicer but is beefier and more satisfying.

After the French conquered the nation in the 1880s, Northern Vietnam is where pho is most believed to have originated. Some food historians think it adapts the French beef stew soup pot au feu.

In the 1950s, Vietnam’s northern and southern regions were split. Throughout this time of transition, several individuals moved south to flee communism. As a result of the regional foods they brought, Southern Vietnam eventually developed its own version of the hearty meal.

The vermicelli and soup in southern Vietnamese pho, however, are thinner. Pho Nam also offers more meat variety since it may use various cattle portions.

Pho Facts – Did You Know?

Although there are other soup dishes in Vietnamese cuisine, only pho contains pure white flour noodles. Hence the term “pho” really refers to noodles rather than Vietnamese noodle soup. The pho broth determines its quality, and a good bowl of pho is clear and flavorful.

The garnishes frequently offered with pho should be torn up and scattered in the soup rather than completely dipped. Less is more when it comes to seasonings; if a broth is lovely, it should be enjoyed without being altered.

Additionally, you may forgo social protocol because eating pho while sipping the soup is customary.

Pho has gained popularity wherever Vietnamese populations and diaspora have grown, and every authentic Vietnamese restaurant will undoubtedly have it on its menu.

Pho, especially the southern style, rose to fame in America when Vietnamese refugees arrived in the 1970s.

Because of the French influence on the meal, you may also find it in Vietnamese eateries in Paris and other major European cities. However, pho is still the focal point of the meal.

Soft noodles, which are entirely manufactured from rice, are a significant component of pho. Due to Vietnam’s long history as an agricultural nation, rice is essential to the country’s growth and the daily lives of its citizens.

Vietnamese cultures have made eating rice and foods created from it, such as noodle soup, buns, steamed roll rice pancakes, and sticky rice cake, a highlight of their day-to-day life.

Additionally, pho is a typical dish because of its simplicity and harmonious fusion of several classic ingredients that are distinctive of Vietnamese cuisine.

Also, eating pho first thing every morning is a practice that helps Western tourists get into the spirit of Vietnam, given that it is a country of early risers. 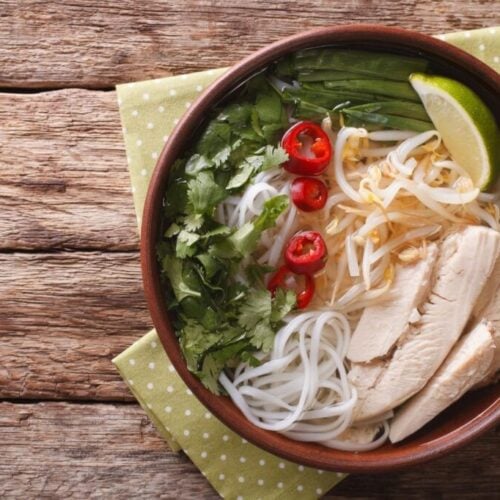 These rice-based noodles are a healthy source of carbohydrates. Additionally, the broth created by cooking the beef, chicken, or hog bone is good for your health.

The heart of traditional Vietnamese food is pho, with chicken pho being a particular source of pride for the Vietnamese people, which is why it has become as popular as it is nowadays worldwide.