Chinese cuisine is vastly popular in restaurants, take out places and many homes around the world. With so many tasty dishes to choose from with this cuisine, it can be hard to find your favorite dish to order!

Chow mein and chop suey are two of the most popular dishes in Chinese restaurants across the globe. Both made with noodles, vegetables and sometimes meats, the dishes are often hard to distinguish from one another.

If you are wanting to order take-out, and cannot decide between a chop suey or a chow mein, then you are in luck! We have created a guide of which is which, where they come from, and how they are made.

What is Chow Mein? 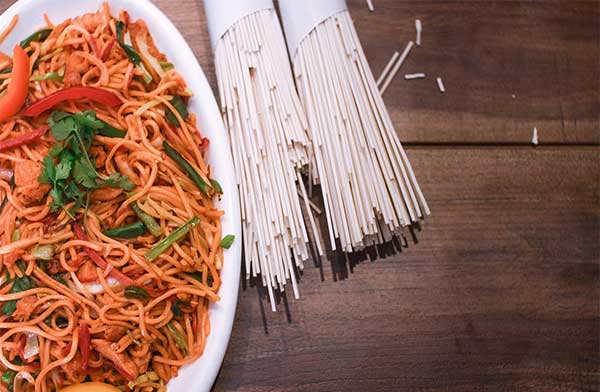 There are two common types of chow mein, and the difference lies in the type of noodles used. Chow mein noodles can either be steamed, or served crispy which is called Hong Kong style.

Chow mein is served differently depending on where you order it. Even in the US, if you order a chow mein in the East coast, you will get Hong Kong style chow mein, whereas the West coast prefers the steamed lo mein style.

The dish is enjoyed across many parts of the world including Asia, Australia, Brazil, the United States and even in the United Kingdom. The most popular recipe is derived from chinese cuisine, but with a westernized twist.

When it comes to chow mein, the recipe involves cooking noodles and adding them to the sauces, vegetables and meat, so let’s take a look at the most typically used ingredients.

To cook an authentic, traditional chow mein, you will need a variety of ingredients, but the most important is the noodles. For this, you will want to cook the noodles in boiling water for around 5 minutes, coating them in a little sesame oil so that they do not stick together.

You will also need to choose your source of protein such as shrimp or pork, however, chicken is the most popular.

For a tasty chow mein, you will want to season the chicken with some soy sauce and Chinese five-spice powder, coating the meat well. For best results, you will need to dust the chicken breasts lightly with some cornstarch!

Then, you have to heat up a wok on a high temperature, and add a little groundnut oil, heating until boiling hot and smoking a little. Once this is done, you will need to add your chicken/meat and stir fry for a few minutes until cooked.

Next, you can add the bell pepper and stir fry for about a minute, before adding your spring onion, celery and bean sprouts and any other vegetables you are using. Stir well and fry the mixture.

Following this, you can add your cooked or fried noodles and add a little flavor with some soy sauce and sesame oil. Stir the dish completely and serve it up!

As you can see here, the ingredients are very similar to that of chop suey, however the method of cooking is slightly different as you cook the chow mein together and stir fry whereas the chop suey mixture is simply served over noodles. So, what is chop suey?

What is Chop Suey? 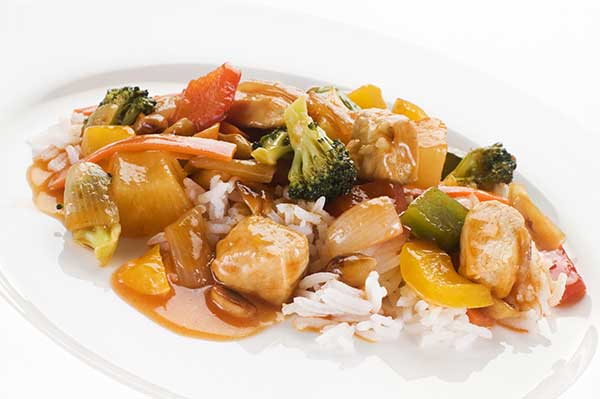 Chop Suey is also a firm favorite among lovers of chinese style cuisine, but is actually an America-Chinese dish. It is considered that chop suey was invented sometime during the 1800s by one of the Chinese ambassadors Li hung Chang’s chefs, who prepared the dish for American guests.

The original dish consisted of meat, bean sprouts and celery mixed in with a flavorsome sauce and served with noodles.

Another tale of the dish’s origin says that the meal was created in a California mining camp by a famous Chinese chef of the era.

It is said that the chef threw together a meal with only ingredients that he had lying about, and named the dish tsa sui which loosely translates into miscellaneous broken pieces. The term tsa sui was then colloquially termed chop suey, and the rest is history.

Whilst the actual origin of chop suey is relatively unknown, the dish is still made in the modern day, and consists of different vegetables, meats and noodles or rice, cooked in a tasty sauce.

When it comes to chop suey, the dish is typically made by cooking a mixture of vegetables and meats, and then serving it over pre-cooked rice or noodles.

As chop suey means to throw a mix of ingredients together, let’s look at what makes a chop suey unique.

In order to make a chop suey, you will need many of the ingredients listed above, and can either serve it over rice or noodles depending on your preference.

Once this is done, you should heat oil within a wok, adding your onions first and sauteeing them on a medium heat until they begin to brown.

Then, you can add cabbage, bean sprouts, celery, carrots, and broccoli, sauteeing them for around 4 minutes until cooked.

Mix the vegetables with your homemade chop suey sauce and serve it up immediately over fried noodles or rice, and you are done!

What is the difference between Chow Mein and Chop Suey?

The real difference between a Chow Mein and a Chop Suey dish is the authenticity and the origin of the dish. A chow mein is considered a real, traditional Chinese dish, whereas the chop suey is an American version of chinese cuisine.

The origin of the chow mein goes back centuries. In Mandarin, chow mein, or ch’ao mien actually means stir fried noodles, and is a term that originated in Northern China.

Although it is now one of the most popular dishes from Chinese cuisine across the world, and may be altered by some Western restaurants, the main recipe remains the same. The chow mein dish is always served with vegetables and boiled noodles.

In addition, chop suey can often be made with either noodles or rice, whereas chow mein is always served with noodles, so if you see rice, then it is most likely a chop suey.

Another stark difference between the two dishes is that chow mein is an established recipe and an authentic chinese dish, whereas chop suey tends to include ingredients that are on hand or readily available, and can change or adapt depending on the chef or the restaurant’s preferences.

Both chow mein and chop suey are full of vegetables and nutritious ingredients, and are exceptionally simple to make.

A traditional chow mein is actually quite low in calories, especially when prepared without meat and as a vegetable dish.

A 56g cup of vegetable chow mein will roughly contain around 240 calories, with 14 grams of fat, and 26 grams of carbohydrates (from the noodles).

In addition, chow mein is actually a great meal to consider if watching your waistline or trying to lose weight.

However, if adding protein or meats to the dish, then the chow mein will obviously be a little heavier on the calories.

Chop suey is slightly more calorific than a chow mein and has a little more fat. The average 56 g cup of chop suey will contain around 290 calories.

In addition, a chop suey may contain around 16 grams of fat, 12 grams of carbohydrates and 24 grams of protein.

If you prefer a lighter dish, then you can prepare chop suey or request that it is made with rice instead of fried noodles for a healthier meal.

You may also find that having a chop suey that is made without meat such as shrimp, beef, chicken or pork will also be healthier and less calorific!

With either dishes, the fried noodles are about the worst part, and the rest is simply sauteed or stir fried vegetables, so both are a hearty meal that all will enjoy.

What’s the difference between chop suey and stir-fry?

However, chop suey is a dish that is different to the quick, cheap and fast dish that you may find financially struggling students making from their dorms in college.

When you think of a stir-fry you will often picture noodles, sauce, and vegetables, perhaps occasionally with meats and fried up and served as a delicious dish.

However, chop suey is a type of stir-fry that does not always use noodles, actually, chop suey more often uses rice as the carbohydrate of the dish.

What kind of noodles in chop suey?

Traditionally chop suey is served over noodles or rice, though it is more common for it to be served on top of rice than noodles.

However, if you are making your own dish or experimenting you can also serve it over noodles.

You can use thick chow mein noodles, or Asian-style noodles. Fried noodles or fried rice will often pair well with this dish too.

Traditionally the vegetables and other ingredients of chop suey are served over rice. This means that the dish is easy to make and very adaptable.

It is a memorable dish like many Chinese food as it is well-balanced between grains and vegetables.

Why is chow mein unhealthy?

The healthiness of Chow mein is a topic up for discussion by many doctors. While it is an enjoyable meal, it is delicious in its flavors.

It has some issues, the fried rice and noodles that go into stir-fried food is delicious, but they also contain a lot of oil which can exacerbate cholesterol levels.

Oily foods like this often produce a lot more stomach acid which can cause bloating as well as headaches which are caused by MSG in the food.

There is also something to say for hypertension too, which is caused by blood pressure rising and is caused by the high amount of salt found in Chinese dishes such as chow mein.

And to top it off, rice and noodles are very rich in carbs. These carbs are broken down by the body very fast to generate energy and therefore do not keep you feeling full for ages.

As a result you may find yourself feeling hungry again not long after, and you may eat more.

The main difference between chow mein and chop suey dishes is that a chow mein is unmistakably part of authentic chinese cuisine, and made with a traditional recipe that has been used and enjoyed for centuries.

On the other hand, chop suey is highly adaptable, and is made with different ingredients (rice or noodles) and often adapted to various tastes, flavors and preferences.

Whilst chow mein is traditionally made with stir fried noodles, chop suey translates to miscellaneous pieces, meaning the ingredients can change and vary. However, both are made in very similar recipes, and are simple and quick to cook.

To settle the debate as to which is better, why not order some chinese takeout tonight and get both a chow mein and chop suey? Find your favorite!