Pecan pie is a classic American Thanksgiving dessert. It consists of a pastry case, an egg-based filling, and lots of pecan nuts. It was originally known as a sugar pie due to the large quantities of syrup and sugar in the recipe.

Store-bought pies are likely to contain preservatives that act to make the pie more shelf-stable and prolong its shelf life.

You should not store an uncooked pecan pie in the refrigerator or freezer. As the bulk of the filling is egg-based it is very prone to curdling.

Freezing and refrigerating an uncooked pie could result in some unpleasant textural results. To avoid this, simply bake the pie prior to storage. 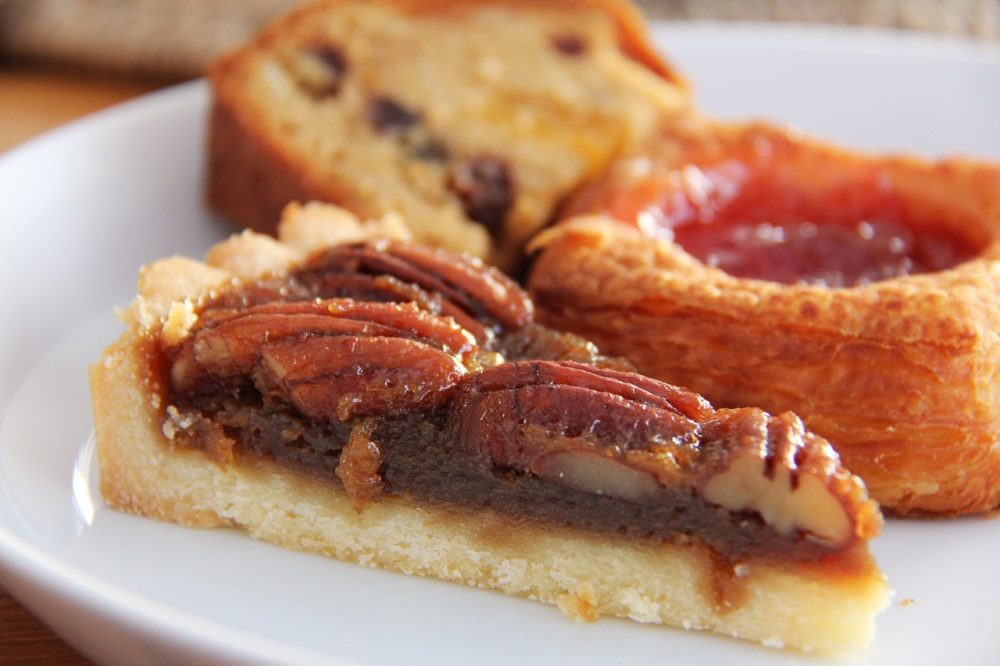 What is the history of pecan pie?

Pecan nuts are native to Northern America and there is evidence to suggest that Native Americans were eating them over 8,000 years ago. Nowadays, Georgia is the primary commercial grower of pecan nuts in the United States.

The word pecan comes from an ancient Algonquin word, pakani. This appears to have been used as a general term for nuts that were difficult to crack.

This is a similar term to the French pacane, and some people believe that French settlers in New Orleans created pecan pie. This is not a very widely accepted narrative as there is little evidence to support this theory.

The pie originates from the Southern area. The earliest written record of a recipe for pecan pie is from the 1870s. It was found in Texan cookbooks and is so popular, that in 2013 it was named the official state dessert of Texas.

In 1898 a recipe for pecan pie resembling the modern day version was printed. This was found in a St Louis church charity cookbook but had been submitted by a woman from Texas.

The pecan pie recipe began to spread outside of Texas by the early 1900s. By 1920 the Karo syrup manufacturers began to print the recipe for a pecan pie on their cans. This caused a massive boom in the availability of and love for pecan pie.

Most modern pecan pie recipes still call for Karo syrup due to this ancient link.

What variations of pecan pie are there?

The most popular pecan pie additions are whiskey, shredded coconut, bourbon, and chocolate. These are by no means the only additions, as people have experimented a lot with add-ins to the recipe.

Some people opt to substitute the refined corn syrup in the recipe for a slightly healthier molasses and/or brown sugar option.

For the whiskey variant, you simply need to add chocolate chips and a few teaspoons of Jack Daniels whiskey to the pie filling.

Chocolate brownie pecan pie is covered with nuts on the top. It is a layered pie that is made with fudge and chocolate pudding. This pie is not served warm, instead, it is served chilled or at room temperature.

Sawdust pie is a staple pie from a restaurant in Kentucky. Patti’s Restaurant in Paducah makes it with a filling based on an egg batter. This is combined with coconut, crumbled graham crackers, and pecans. It is topped with sliced bananas and whipped cream when it is served.

Alice Columbo’s Race Day chocolate pecan pie is named after a food editor for the Louisville Courier-Journal based in Kentucky.

She made it on the day of the Kentucky Derby to mark the occasion. The recipe incorporates cornstarch, bourbon, chocolate chips, and whipped cream.

How to Store Pecan Pie

Pecan pie is often served warm and can be eaten straight from the oven. If you are not planning on tucking into the pie within 2 hours of baking, it should be placed in the refrigerator.

The optimal temperature for bacteria to reproduce is between around 40 and 140 degrees Fahrenheit. Room temperature is often in the range of 68 - 72 degrees Fahrenheit, so it is wise to not leave the pie on the side for hours. If harmful bacteria are allowed to grow, you run the risk of giving your guests food poisoning.

We suggest using a sealing pie plate to store the pie in the refrigerator. If you do not have one of these, you should try to find something that will create an airtight seal around the outside of the pie.

To store, you should cover the surface of the pie with a layer of plastic wrap or aluminum foil. Do not cover it too tightly if the pie is still warm, this can cause the pie to get soggy from condensation. It can also deform the shape of the pecan pie if you wrap it too tightly.

If you do not have aluminum foil or plastic wrap on hand, an alternative is to place an inverted plate on the top of the pie. This takes up much more space, and so is not the most convenient storage solution if you have a small or very full fridge.

The tighter the pie is wrapped once cool, the less air can permeate the pie. This means that there is a reduced risk that the pie crust will become soggy during storage. 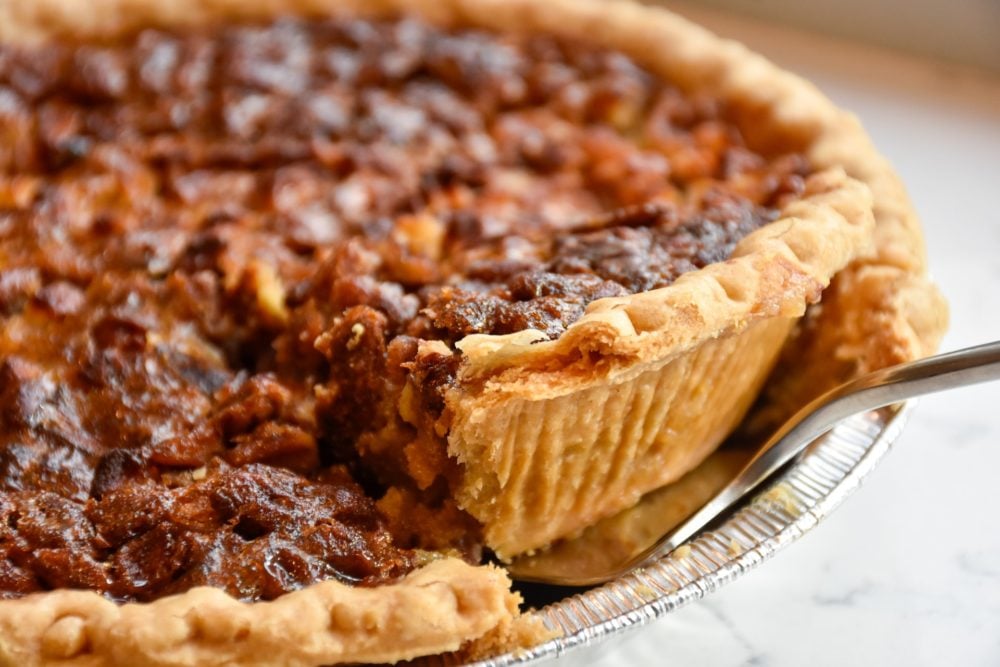 How long can you store pecan pie in the refrigerator?

The structure of pecan pie is very resilient and as such, it holds up well to storage in the refrigerator.

For optimal storage, place the pecan pie as far away from the door of the refrigerator as possible. This is because this area of the refrigerator will remain at the most stable temperature and will reduce the likelihood of the pie cracking on the surface.

If stored correctly, pecan pie will keep for around 4 days in the refrigerator with no deterioration in quality.

How to Freeze Pecan Pie

If you have made the pecan pie in advance for a celebration or family gathering, you are likely to want to freeze it as a whole pie.

To do this, you must allow the pie to cool completely. We suggest leaving it on the countertop on a wire rack to cool. If you do not cool it completely, this could cause condensation, leading to moisture on the top of your pie.

Moisture is one of the key components in the development of freezer burn. This means that your pie should be as dry as possible prior to freezing to reduce the risk. Additionally, a moist pie being frozen could mean that the crust becomes soggy upon reheating.

Additionally, you can place the wrapped pie in a freezer-safe ziplock bag for added protection.

If you live alone, we suggest freezing the pecan pie in individual slices. This will prevent you from having to thaw and reheat more than you can eat in one go. You should slice the pie into individual portions and allow it to cool completely.

Wrap each slice individually in aluminum foil and then place inside a labeled ziplock freezer bag.

If you prepare the pie correctly for storage, it can last for up to 2 months in the freezer. It will remain safe to eat after this point, but the texture and taste may be slightly compromised.

How to Reheat Pecan Pie

You should never reheat pecan pie more than once. For this reason, it is vital to only reheat what you will be eating to minimize your food waste.

You can eat pecan pie cold directly from the fridge, but if you prefer it warm the optimal way to do this is in the oven.

Preheat the oven to 325 degrees Fahrenheit and place the pie on the central shelf for around 15 minutes. This time will vary depending on the quantity of pie you are reheating, so adjust accordingly.

To reheat from frozen, we advise leaving the pie to thaw in the fridge overnight the day before you wish to consume it. Preheat the oven to 275 degrees Fahrenheit and place the pie in the oven for 20 minutes, until warm all the way through.

How can you tell if a pecan pie has gone off?

There will be obvious visual signs if the pie is unsafe to eat, such as mold. Look for any other visual differences in the pie to get an indication of whether it is safe to eat.

Smell it as well. If the pie smells musty or acidic, it has gone off.

How to Best Prepare Your Pecan Pie for Storage

To prevent your nuts from becoming soggy during storage, we advise toasting them before adding them to the egg mixture.

In a frying pan over a low heat, you should gently heat and toast the pecan nuts for a few minutes. We do not recommend frying them in any oil or other fat, instead just toast them dry in the pan until they release rich, nutty aromas.

To prevent the pie from cracking on the surface or the crust, you should take care to not overbake the pie. Do not cool it too quickly either, as this too can cause cracking. Sudden temperature changes really impact the structure of the pie and should be avoided as far as possible.

Pecan pie is a staple American dessert, even being recognized as an official state dessert! It has been loved by generations of people, dating all the way back to 1870.

We suggest toasting your pecan nuts prior to cooking to reduce the risk of them becoming soggy. Cool it gently to keep the pie’s surface intact.

It is important to keep your pecan pie at a chilled, stable temperature due to the high risk of food poisoning from the egg-based filling. We strongly advise cooking before storage as this will give you the best possible results.

A pecan pie cannot be stored for longer than 4 days in the refrigerator and should be covered at all times. We suggest placing it as far away from the refrigerator door as possible as this is the most thermostable place.

If you are freezing the pecan pie, we suggest double covering it to prevent freezer burn from developing. You can freeze it as an entire pie, or as individual slices depending on how much you can eat at once.

To defrost, allow the pie to thaw overnight in the refrigerator and then heat it gently in a preheated oven for 15 to 20 minutes.

Never reheat pecan pie more than once, and never refreeze thawed pie as this can lead to a lot of harmful bacterial growth.