Microwaving food can be a tricky business. It will either be easy and simple to just heat through a dish.

Or it can be a long and frustrating process that ends in a big mess. We have all accidentally exploded soup in the microwave. Or, as happens surprisingly commonly, set fire to a potato.

Setting fire to a potato in the microwave might sound hilarious and ridiculous. And it is. Until you find yourself staring through the glass as a potato ablaze slowly rotates.

Then what do you do? (Hint: read on or scroll down for some very important safety tips for microwaving food).

Microwaves are usually used for just reheating food. But that’s not all they can do. They aren’t called microwave ovens for nothing.

There are many different foods and dishes that you can actually cook in a microwave. Some of the best dishes are those made with potatoes (as what savory dish wouldn’t be improved with some fluffy carby loveliness?)

So, how long should you microwave a potato for? This, as with cooking any food, depends on several factors. These factors are:

These are all pretty basic things but they will have an impact on the results of your cooking.

So, read on for the best tips and tricks for microwaving a potato. As well as a few delicious potato recipes that can be quickly and easily made in the microwave. 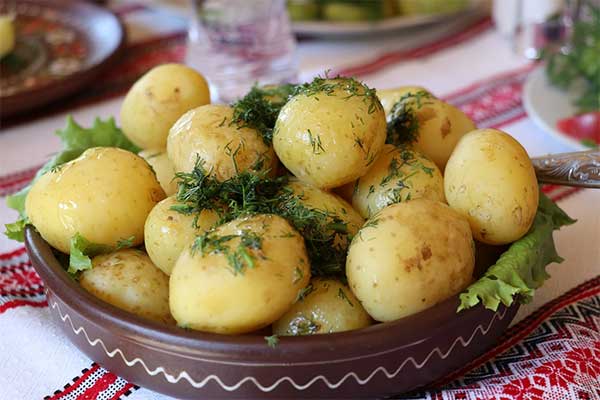 First up, size. This is one of the most important factors.

The length of time to microwave a potato mostly depends on how big it is. This is because the heat and microwaves will need to penetrate the potato to heat and cook it.

The bigger the potato, the longer it will need to be in the microwave.

The average-sized potato is around 4-5 inches long. This size potato will take around 15-20 minutes to cook through. It will likely take longer but it’s best to start out with 15 minutes.

Then, if more time is needed, return the potato to the microwave for an additional 10 minutes. Repeat, or reduce the time to 5 minutes, as needed.

The type of potato will also make a big difference when it comes to how long it takes to microwave.

For example, a standard baking potato will take much longer than a sweet potato. This is due to the density and texture of the flesh.

A white baking potato has very dense and heavy flesh. This is why they are so thick and heavy when mashed or cooked. A sweet potato (which is a fibrous complex carbohydrate) has flesh that is much less dense.

So they will microwave much more quickly. It is also why white potatoes are not considered to be one of your 5-a-day.

If you have very large sweet potatoes, then they might take a bit longer. But, similarly to white potatoes, you can keep returning them to the microwave for incremental periods of time.

The strength of your microwave will also have a bearing on how long you should microwave a potato.

While there is some variation, there isn’t a huge difference between microwaves. Due to the density of potatoes, it’s best to heat them on HIGH.

This will cook them much more quickly than in other settings.

What you intend to do with the potato is another important factor in the cooking time. For example, if you plan to eat the potato as it is with a topping then you will need to cook it until it is thoroughly cooked.

If you plan to finish it off in the oven, then you need to cook it in the microwave for a slightly shorter time.

The potato will take a while to cook in the oven but it will still heat it up a lot. You don’t want to cook it completely in the microwave, otherwise, it will become overdone and burn in the oven.

Microwaving a Potato Step by Step 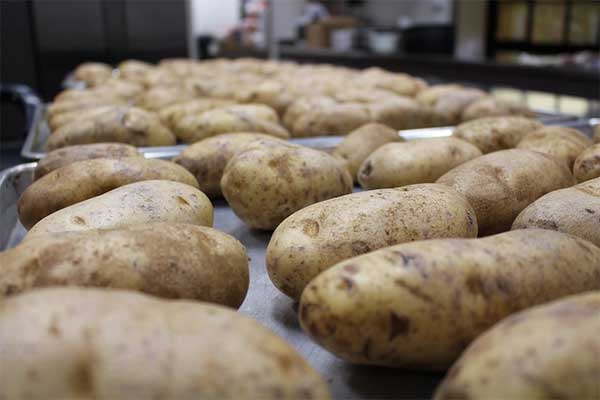 So, now you have some very important information about microwaving potatoes.

But, if you’re not sure how long to microwave a potato for, you’re probably also unsure of what else you should do with it.

So, to help you out here is a very simple step by step guide to cooking a potato in the microwave.

There are a few different potato recipes that can be made in the oven but this is for the simple process of cooking a potato until it is soft. (Read on or scroll down for a few more recipe suggestions). 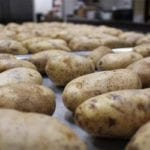 How to microwave a potato
Total Time15 mins

Depending on the type of microwave you have, you will potentially have some very specific settings.

Some, usefully, have a setting specifically for potatoes. If your microwave has this, then it’s definitely a good idea to use it. It will cook the potato slightly differently and give you a better texture.

Using a microwave is one of (if not the) most efficient ways of cooking food. Especially cooking a potato. But, as with an oven, it does come with some hazards.

When it comes to potatoes, there are a few to remember. The most important things to remember for microwaving a potato are to:

As it will stop the plate or dish from becoming too hot to handle and then eat off. But, placing the potato straight on the microwave rotating plate isn’t a good idea. For one, it will become damp.

You will likely have noticed that microwaving food can often result in them being wetter and soggier than if it had been cooked in the oven.

This water often accumulates on the sides of the microwave, including on the rotating base. If you place the potato directly on the base, then it can potentially soak up this water.

A soggy potato is not something anyone wants.

This is because microwaves cannot penetrate the metal. So they deflect off the surface of the metal. This damages the microwave oven itself. It can also start a fire.

Wrapping a potato to cook in the microwave won’t have the same effect as in the oven. So there really isn’t much point in wrapping it in foil. But you should still never put metal in the microwave.

Cooking Potatoes in the Oven

Of course, you can cook potatoes in the oven. But this will take a very long time. Up to 2 hours, if not longer. Even for sweet potatoes. So if you have the option of using a microwave, it really isn’t worth the wait.

But, one reason some people prefer to bake potatoes in the oven is due to the texture. When cooked in the microwave, a potato will come out softer but still quite dense.

When cooked in the oven, a potato will come out fluffy with a crispy skin.

If you prefer fluffy potatoes with crispy skin, there is a workaround. You can partially cook the potato in the microwave and then finish it off in the oven.

This will reduce the cooking time massively and allow you to still have the delicious texture you love.

But a microwave oven can actually be used to make several potato recipes. Here are just a few of those delicious recipes.

Roast potatoes are one of the best sides in existence. They have the perfect combination of crispiness and fluffiness. And are just a joyous carb to devour.

But, as with most potato recipes, they take a long time. Sometimes once you have boiled the potatoes, it’s easier to just mash them up and consume the carbs in the easiest and most direct way.

BUT. There is another way. You probably read this title and thought “What? You can’t roast something in the microwave”. But yes, yes you can. And here’s how: 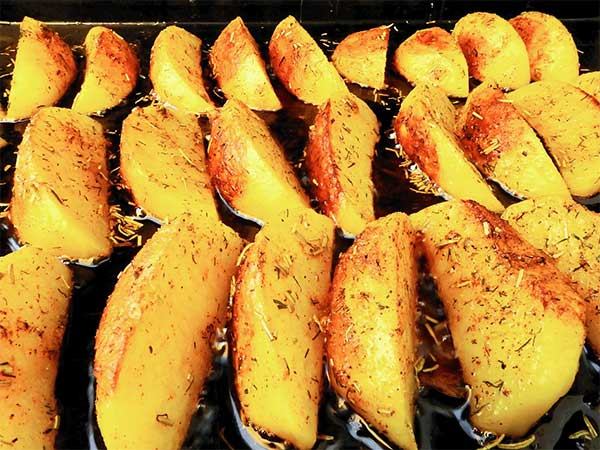 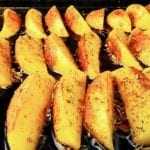 Hasselback potatoes are kind of halfway between a baked potato and roast potatoes.

They are a great way of cooking potatoes and being able to enjoy a denser texture, rather than a fluffy one (if that’s what you prefer). Here’s an easy recipe for Hasselback potatoes: 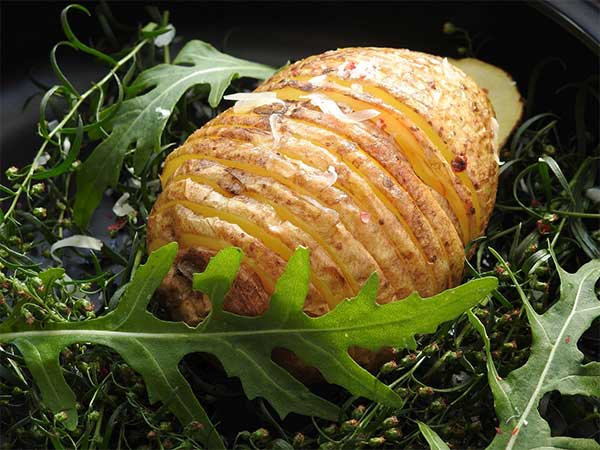 (One potential problem with Hasselback potatoes is that they will take a little longer than roast potatoes due to their size.

You will only be able to do a few at a time. But, they will still be quicker in the microwave than in the oven!)

Mashed potatoes might not be the most obvious potato dish to make in the microwave but it is possible.

The decision on whether to make mashed potatoes in the microwave depends on how you like your mash.

If you prefer whipped, creamy mash then this might not be the best option for you. It is possible but it won’t be quite the same.

Read on a little to the end of this recipe to find out why, plus a few tips. But, here are some simple steps for this very simple recipe. 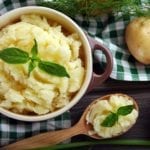 At this stage, it will just make the potatoes watery. (This is why you shouldn’t pierce the skin before microwaving the potatoes. The steam will moisten the potatoes).

Potato skins are a very popular side, especially at a BBQ or potluck. They are loved for having a crispy skin filled with fluffy flavored potato.

But can you make these in the microwave? You sure can! Here’s a simple recipe for microwaved potato skins.

Baked potatoes are the most popular recipe for microwaving potatoes. Some will simply eat a potato with some butter on it.

This is delicious (what’s better than butter and carbs) but it is a little plain. So, to help you liven up your baked potatoes, here are some different topping ideas:

Now you have a good understanding of how to properly cook a potato in the microwave. You also have a few ideas and recipes to try out.

These are all great ways of microwaving a potato. But to make sure you make the perfect potatoes, here are some tips and tricks to follow.

So, treat the plate or dish as you would a baking tray from the oven. You wouldn’t eat food straight off the baking tray.

Take the plate or dish out and then transfer the potatoes to another dish that is cool and can be eaten off.

This might seem like a little thing. But trust us, it will make all the difference. (Enough of a difference for that extra plate or dish to wash up).

So, there you have it! You now know everything you need to know (and more!) about microwaving potatoes.

You can now use your microwave oven to make a wide range of potato dishes. This is probably much more information than you were expecting.

Most people just microwave a potato so that they can make a speedy baked potato. But there is so much more that you can do.

Microwaving potatoes is super quick and easy. It will cut out hours from your cooking time. Microwave ovens aren’t magic and can’t be used for everything.

And they won’t give you the same results as a traditional oven will. But they are great when you don’t have the time (or the will) to wait hours for a potato that you will eat in minutes.

So, get cooking and save so much of your time and enjoy your carby snacks.