Originally a traditional Irish dish, corned beef, and cabbage is a delicious and hearty weekday meal that can be enjoyed all throughout the year, though it’s particularly popular during winter.

The fact is, Ireland has a complicated relationship with beef. In the U.S., beef is a large part of our diet. However, in Ireland, cows were traditionally used for dairy products such as milk and butter. Also, cattle symbolized wealth in Ireland, so cows were usually killed for beef only when they became old.

The original recipe can take quite a while to cook and can be difficult for beginner cooks to master, as the braised corned beef needs to be cooked to perfection, succulent, and practically falling off the bone.

For these reasons, this signature dish is usually reserved for special occasions like St. Patrick’s day, due to the preparation, cooking time, and technicality of the recipe. But, what if we told you that there’s a solution?

Today, we’re going to be talking you through an alternative, beginner-friendly recipe that will allow you to cut the cooking time in half, without compromising on the tenderness of the beef, or the flavour of the cabbage.

So, without further ado, let’s jump in and give this corned beef recipe a try!

What’s the Story Behind the Traditional Recipe?

In Ireland, St. Patrick’s day usually takes place during the fasting season known as Lent, which is a period of six weeks in the lead up to Easter, which is one of the most important festivals in the Christian calendar.

It is deemed to be a season intended to reflect the time Jesus Christ spent in the desert, so many people spend this time fasting from both festivities and food.

Despite this, on St. Patrick’s day, an exemption is made which allows people living in Ireland to celebrate their patron saint with a delicious meal. During the day, a special dinner is cooked by families, and that meal often tends to be corned beef and cabbage!

What Exactly is Corned Beef?

Unlike standard beef, corned beef is beef that has undergone a process known as salt curing.

Brisket is usually used for corned beef, and it gets preserved in brine and large grains of salt. Sometimes, sugar and spices are also added to give it a more fragrant taste.

Why is Corned Beef and Cabbage so Popular in America?

After the end of the Great Famine that happened in the middle of the 19th century, many Irish people chose to emigrate to America, in hopes of a better life.

During the period of the Great Potato Famine in Ireland, the majority of beef was exported to other countries, which meant that it was almost impossible for regular Irish citizens to be able to afford to pay for beef, which was considered to be the most premium source of protein at the time.

Any cows that weren’t used for meat were instead used for dairy, other farm animals such as sheep were used mainly for their wool so that people could make warm clothing.

So, when a vast amount of Irish moved to America, newly arrived Irish Americans quickly discovered how readily available corned beef and cabbage was.

Interestingly enough, though corned beef and cabbage are common foods in Ireland, it is widely believed that the rise in popularity of these foods amongst Irish Americans was more to do with the fact that it was so affordable and easy to come by.

Soon after, it became a tradition to celebrate St. Patrick’s Day with music, dancing, and hearty dinners with corned beef and cabbage as the main event, something which has continued to the present day.

How long does it take to cook?

Usually, the preparation time for corned beef and cabbage can easily fill up an entire morning. However, for this unique cooking method, we’re going to be using our Instant Pot Slow Cooker, which will cut that time right down.

On average, your beef will take around 90 minutes to become succulent and tender, particularly if it’s brisket. As for the cabbage and any other vegetables you’d like, you should cook these last, as they will only require around 5 minutes.

Important information to keep in mind when using a slow cooker:

The most challenging part about preparing corned beef and cabbage in a slow cooker is making sure that you get the timing right and plan ahead.

As you’re going to be using your slow cooker two times, you’ll need to make sure that you pre-warm your oven after the beef has finished cooking in your Instant Pot, so that it will stay warm and tender while the cabbage cooks.

As slow cooking is a form of pressure cooking, there is a very strong chance that your beef will shrink in size during the cooking process. This is entirely normal and to be expected, but, if you’d like to make sure your beef is as large as possible, we recommend purchasing the largest size beef that will fit inside your Instant Pot Slow Cooker.

What are the Benefits of Cooking Corned Beef and Cabbage in My Instant Pot?

One of the main benefits of choosing the Instant Pot method is that it allows you to cut the cooking time down significantly.

Choosing to cook your corned beef and cabbage in your slow cooker will also provide plenty of conveniences, as you won’t have to worry about going back and forth to check on it.

As soon as you have placed your ingredients inside and switched on the pressure cooking feature, your Instant Pot will do the rest.

In this way, while your beef and cabbage cook, you’ll be free to spend time with your family, clean your home or simply enjoy some much needed time to yourself.

What’s more, you won’t have to worry about spreading any mess throughout your kitchen, as the only thing you’ll need to clean-up afterward is your slow cooker!

In contrast, one of the only downsides to cooking with a slow cooker is that meat can sometimes shrink due to the high pressure, though this can be easily remedied by purchasing a larger size corned beef brisket (4lb is what we recommend).

In addition to that, unless you have a larger Instant Pot, you’ll have to cook the beef and cabbage separately, though we explain how to do this effectively in our recipe below.

Are There Other Kinds of Corned Beef and Cabbage?

Yes, there are different types of corned beef and cabbage besides the more convenient, instant recipe we’re covering today. 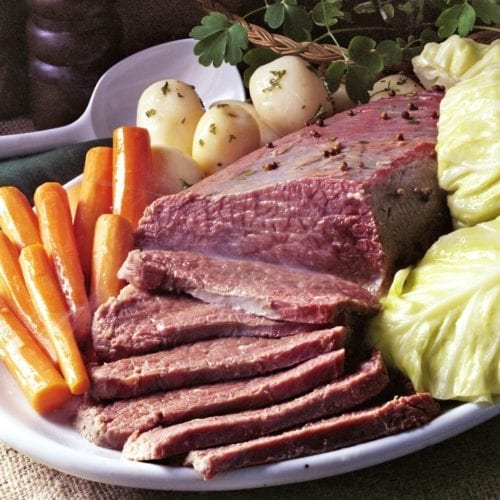 After you have switched your Instant Pot on, it won’t begin to start pressure cooking your corned beef skillet immediately. On the contrary, though your Instant Pot’s display will say that it is turned on, it will need around 15 minutes to heat up the water enough to begin the pressure cooking process. For the first 5-10 minutes, nothing will happen as the water will not be yet warm enough. After 15 minutes, your pot should begin to hiss and steam, which indicates that the water has heated up to the correct temperature. Then, the red pin on your Instant Pot will flick up, a beeping noise should be emitted a few minutes later, and then the ‘On’ written across the screen should switch to the 1 hour and 30-minute countdown process.