Anyone who has ever tried a Mochi doughnut will wholeheartedly agree that it is an unforgettable experience. Unfortunately, not every location has a Mochi donut shop nearby. However, this means you get to make them at home. Yay!

Mochi donuts are light and airy on the inside and chewy and satisfying on the outside, thanks to a deep-frying technique. And mochi donuts have recently taken the dessert world by storm for a good reason.

After tasting this donut, I knew I had to learn how to make one and share this delight with everyone. So, I have spent a considerable amount of time perfecting this mochi donut recipe, which is second to none; they taste exactly like the real thing.

Moreover, they can be served as a dessert, or you can serve them with tea or any drink of your choice. Keep reading for the secret to delicious mochi donuts.

Flavor and Consistency of Mochi Donuts

Mochi doughnuts are deep-fried dough balls in a ring shape with a chewy texture and crispy coating on the outside. Furthermore, mochi donuts combine the greatest qualities of both donuts and mochi.

Mister Donut of pon de ring donuts in Japan is responsible for popularizing these bubble-ring-shaped doughnuts. In addition, the chewy texture interior and crisp deep-frying exterior have made it a fan favorite. I mean, anything deep-fried is a winner.

Flavors from Asian markets inspire the gorgeous mochi doughnuts and glazes. Therefore, it is common to find flavors like lilikoi or passion fruit, matcha, or ube-flavored mochi donuts.

Typically, mochi is prepared from short-G sticky rice and additional components, including sugar, water, and cornstarch. With a mortar and pestle, the rice is ground into a paste to form the appropriate form. The Japanese term for this preparation ritual is “mochitsuki.”

Moreover, mochi is a Japanese rice cake produced from glutinous or refined sticky rice. In addition, gluten-free tapioca powder or glutinous rice flour is often used to make mochi doughnuts. Even though some of the recipes call for all-purpose flour, they may easily be adapted to be gluten-free.

Japanese New Year celebrations wouldn’t be complete without Kagami mochi, mirror cakes, and the traditional soup ozone, which has mochi. And when cherry trees bloom in the spring, Anko is used to stuff mochi.

Consequently, mochi, in its delicious variations, is popular in places with large populations of Japanese emigrants from all over the globe.

Donuts made with glutinous rice flour, commonly referred to as sweet rice flour, are a denser take on the traditional Japanese mochi donut.

These Japanese treats are made using a delicious combination of glutinous rice flour or tapioca starch, egg, sugar, milk, and baking powder.

Compared to dishes made with tapioca starch, those made using glutinous rice flour have a thicker, chewier consistency.

However, the tapioca starch will make it light and airy instead of a heavy, dense consistency. Additionally, To provide a third option, some recipes ask for a mixture of the two, so it’s ultimately up to you to determine which you prefer.

After trying several different donut recipes, we observed that in other homemade recipes, the consistency of their doughnuts was never quite as wonderful as store-bought donuts.

After doing a little research, we found this was a consistency issue. The store-made donuts had a runnier consistency which is the secret to delicious mochi donuts.

There’s no shortage of frosting recipes to choose from. In most cases, you’ll use a simple sugar glaze consisting of icing sugar and milk. Afterward, you may modify the taste by introducing other components, such as vanilla, matcha, strawberry, or chocolate.

The Quick and Easy Way to Make Donut Flower Rings

The Mochi donut typically comes in the cutest flower shape. Nevertheless, you could do a normal ring donut, but where is the fun in that? Plus, the flower ring shape provides more surface area for a crispier texture.

I would advise you to use a piping bag and a piping tip to form the dough into the right shape. We made these ring donuts by carefully squeezing one ring of eight dough balls onto parchment paper.

Cutting the dough with a paring knife is good for releasing the dough from the bag. In addition, this helps to produce more uniform dough balls.

In addition, the donuts can have even more uniform spheres by dipping a finger in water and smoothing down the tops of the balls.

Vegetable oil is our go-to for deep-frying mochi donuts since it can endure the heat, is readily available, and doesn’t cost too much. Additionally, vegetable oil has a mild flavor that will not affect the taste of the donuts.

When frying donuts, we fill the pan with oil within two inches of the rim and heat it to 340 degrees. Keeping the frying oil at the appropriate temperature is essential, so invest in a thermometer with a quick readout.

To begin, place the donut and the parchment paper into the pan and press down gently with tongs.

Allow the donuts to rest in the oil for 30 seconds, then use tongs to remove the parchment paper.

After one minute, turn the doughnut and soak it entirely using your filter. When golden brown on all sides, take it off the heat and place it on a rack lined with paper towels.

Due to the absence of wheat flour, the donuts should be removed from the oil when they are faintly golden rather than fully browned.

Once you remove the donuts from the fryer, drain off the extra oil on a rack. That’s the perfect time to dip the donuts into the frosting and let them rest again for another minute. The glaze will solidify a little bit in this process.

If you want to make a strawberry topping, put the white chocolate chips in a microwave-safe dish and melt them. Once they’re melted, add the fresh strawberries and one drop of pink food coloring.

Next, mix them using a conventional blender. Sprinkle the donuts with sugar and lay them on a cooling rack after dipping them in the glaze.

Also, you can use matcha glaze. Combine the white chocolate chips with hot, simmering heavy cream. Then whisk in the matcha powder and combine again. Then, finally, let the donuts dry after dipping them in the glaze.

You can keep mochi donuts for two days at room temperature in an airtight container. On day one, they are most tender and chewy. However, over subsequent days, they dry up.

Hence, refrigerating them will cause them to harden, so keeping them at room temperature is best.

Mochi donuts have significant textual consistency changes after storing them for more than a day. You shouldn’t plan for them or put them away.

How to Make Mochi Donuts 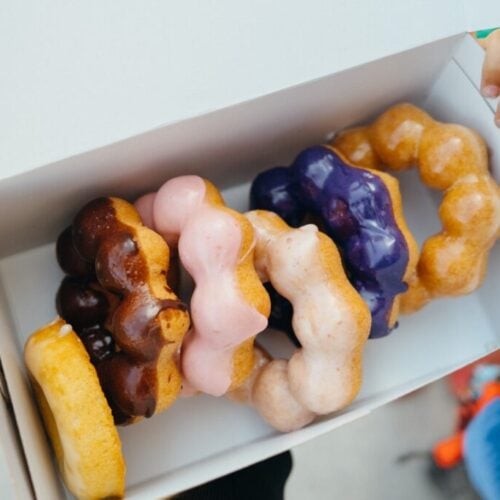 Calories: 217kcalCarbohydrates: 48g
Keyword how to make mochi donuts, mochi donuts
Tried this recipe?Let us know how it was!

With this easy and quick mochi donuts recipe, we hope you can now make mochi donuts comfortably at home. Remember to store them properly if you want to enjoy them in their best state.

Try it out and drop your comments!