There is no doubt that every American will have heard of Jolly Ranchers. Jolly Ranchers is a company that manufactures sweets, and their products are without a doubt some of the most popular in the country.

From hard sweets to chewy gummy sweets, they produce a variety of different types which guarantee that there is a product for everyone.

It is a common misconception that a vegan diet is a healthy diet, but in reality, there are a lot of different food vegan options that definitely are not healthy.

A vegan diet isn’t about healthiness, it is about living ethically and thinking about the world that we live in.

So there are a lot of sweets and other treats that have been constructed with ingredients that allow them to be enjoyed by vegans.

Today, we’ll be taking a look at whether or not Jolly Ranchers sweets are vegan, as well as tackling some of the common misconceptions surrounding a vegan diet.

So if you are a vegan and you’re hoping you’ll be able to enjoy some of Jolly Ranchers scrumptious treats, then keep on reading. 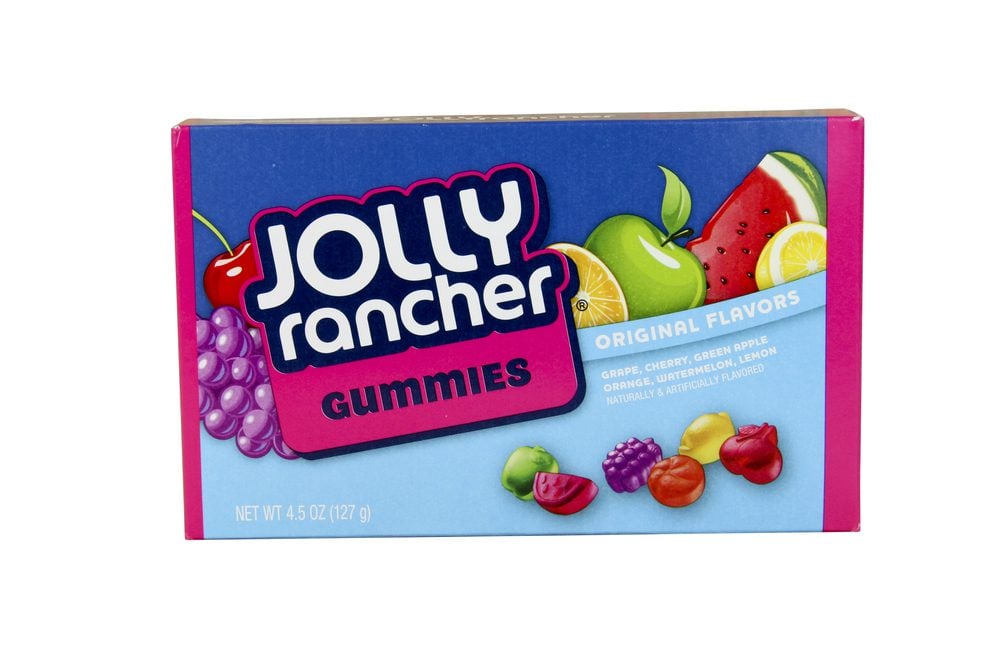 What are Jolly Ranchers?

As we have already mentioned, Jolly Ranchers is a company that produces a variety of different sweets. The company was first founded in the 1950s under the name ‘the Jolly Rancher Company’.

In the early days, the company produced ice cream as well as sweets and chocolates and sold them in the Denver area.

But over the years as the company has grown and expanded across the US, their primary focus has changed to sweets of both the soft and hard kind.

The company is now owned by confectionary giant, the Hershey Company, and the operations for Jolly Ranchers are now completed within the existing Hershey owned factories.

As the Jolly Ranchers brand is now owned by a parent company, to determine whether or not the company can be seen as “vegan” we will also have to look at the position which the Hershey Company takes on veganism.

While this will not be important to everyone, some strict vegans will refuse to purchase products from a company if their parent company is not vegan, so it is important that we check the stance of both companies.

As you will probably expect, neither the Jolly Ranchers brand nor the Hershey Company runs entirely vegan operations.

It is clear that the Hershey Company is not vegan as their primary product is chocolate which normally has to be produced using milk as an ingredient.

Similarly, the Jolly Ranchers brand is not promoted as a vegan company which probably means that at least a few of their products must contain animal products.

This might be enough to put some vegans off of the company, but the majority of vegans choose whether or not to eat something based on the specific product, rather than the brand’s stance on veganism.

With this in mind, let’s take a look at the ingredients which could pose an area of concern for vegans.

The majority of vegans decide whether they should eat something based on the ingredients within it and whether or not they contain animal products.

The ingredients that are directly linked with animals are usually easy to spot, but it is spotting the ones where the connection is not as obvious that is difficult.

With that in mind, let’s take a look at some of the lesser-known areas which could cause a product to not be vegan. The first one we have already briefly mentioned, and that is sugar. In particular, white sugar.

Before we go any further, let’s make it clear that there absolutely zero animal products within sugar. But they are used in some sugars during the production process.

The one type of sugar that poses the most concern for some vegans is white sugar. White sugar and brown sugar are both very similar, but the main difference between the two is their color.

White sugar is undoubtedly the preferred option, and this is probably because of the pure white of its appearance. White sugar is deliberately manufactured to achieve this white color, and it is this which means that white sugar cannot be classed as vegan.

As we have already said, no animal products are included in the final sugar product as they are burned off throughout the process, but without the inclusion of calcium carbonate, your sugar would not be white.

Not all vegans avoid foods that have used animal products in their processing methods, however, some do. So it is important to be aware of the controversy surrounding white sugar.

Another controversial ingredient to watch out for is honey. Honey is, of course, created by bees and so it is classed as an animal product.

The philosophy behind veganism is to avoid causing harm to any animals which include insects, and in turn, includes bees.

The same thing applies to colorings. But colorings are also controversial as there is the potential that they may have been tested on animals. This is why so many vegans choose to buy products that only contain natural flavors and colors. 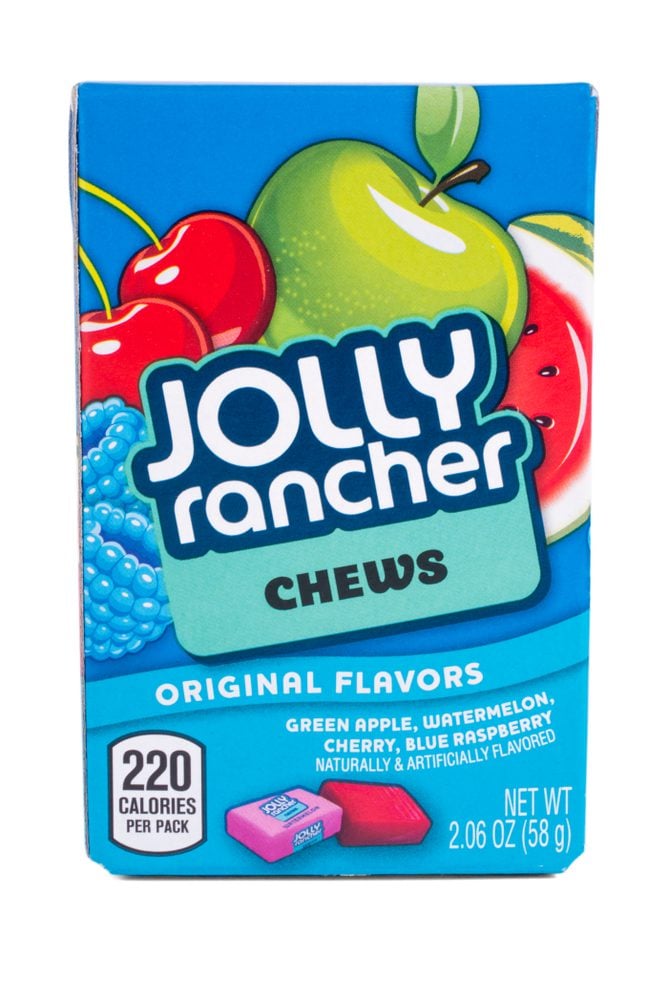 But now it’s time for us to answer the question ‘Are Jolly Ranchers Vegan?’. As the company produces lots of different products, we have chosen to focus on their primary products and to divide these into two categories to make it easier to navigate.

Jolly Ranchers’ entire range is confectionary so we have divided their confectionary range into soft and hard sweets. First, let’s take a look at their soft sweets.

Firstly, let’s take a look at the ingredients in Jolly Rancher Jelly Beans. Unsurprisingly, the majority of ingredients in these sweets are of the sugary kind with sugar, corn starch, and corn syrup making up the main ingredients.

The sweets also have a mixture of natural and artificial colorings added to give them their fun appearance, but it appears that all of these colorings are cruelty-free and vegan.

This recipe also notably excludes gelatin which is incredibly common in soft jelly sweets. This combined with the fact that white sugar is not stated as an ingredient in the recipe means that Jolly Rancher Jelly Beans are vegan.

Moving onto the Jolly Rancher gummies, the recipe for these sweets is very different and the ingredient list changes from flavor to flavor.

The majority of the ingredients in all of the recipes seem safe for vegans, but there is one ingredient in some of the flavor options which ruins this, and that is the presence of gelatin in the recipe.

Gelatin is a protein that is obtained through boiling the skin and bones of animals, primarily pigs. It is included in a lot of gummy sweets to give them their texture, and because of its presence in this sweet, we are sad to say that Jolly Ranchers Gummies are not vegan.

Now let’s take a look at the hard sweets which Jolly Ranchers sell.

Now let’s take a look at the hard sweets that Jolly Ranchers offers, primarily their hard candies and their lollipops.

The first one that we will look at is the Jolly Rancher Hard Sweets. We’ve checked out the ingredients list for this product, and the primary ingredients seem to be sugar, corn syrup, and a variety of artificial flavors and colors.

After taking an in-depth look at the ingredients included in the hard sweets, we are happy to say that none of them are linked to animal products, and because of this Jolly Rancher Hard Sweets are vegan.

There is next to no differences between the two products, and because of this, we are happy to say that Jolly Rancher Lollipops are also vegan.

In short, on an official level, Jolly Ranchers are not a vegan company. They do not promote their sweets as vegan, but this does not mean that all of their products are not vegan-friendly.

Of the products we have looked at, it is only the Jolly Rancher Gummies which are not vegan and this is because they contain gelatin in their recipe.

Aside from these sweets, the Jolly Rancher hard sweets, lollipops, and jelly beans are all vegan, meaning that these are all excellent options if you are a vegan looking for a sweet treat.