When it comes to eating a vegan diet, some things are obvious and easy to avoid. So you won’t have much trouble avoiding meat, dairy, or eggs. But the really difficult part comes when you look at packaged and processed foods.

One option is to only eat whole foods and make everything yourself. While these are good ideas and whole foods should be a staple of your diet, you still deserve a treat every now and then.

For processed foods, it can be difficult to work out if they are vegan or not. This is especially true of candy. You might assume that most candy is just sugar and water (and that is often true).

But there are some that include gelatin or even milk powder and other animal products. Even those that might seem to be vegan-friendly can have some suspicious ingredients.

So, for the answer you’re looking for, are skittles vegan? Yes, they are!

But that doesn’t mean you should go out and grab the first packet you find. Skittles are certified as vegan-friendly by PETA. But there are a few ingredients that are controversial, even in the vegan community.

But how can there be controversy? Well, a vegan diet isn’t quite as straightforward as most people think. You will have likely heard the phrases “vegan” and “plant-based” used interchangeably.

This is considered to be fine by some vegans. But a complete misrepresentation by some vegans. The strictness of a vegan or plant-based diet are important factors to consider.

One thing we should get out of the way is the difference between a vegan and someone who eats a plant-based diet. We might be wading into some intense ideology here and you will probably wonder how it can relate to skittles. But trust us, it does. 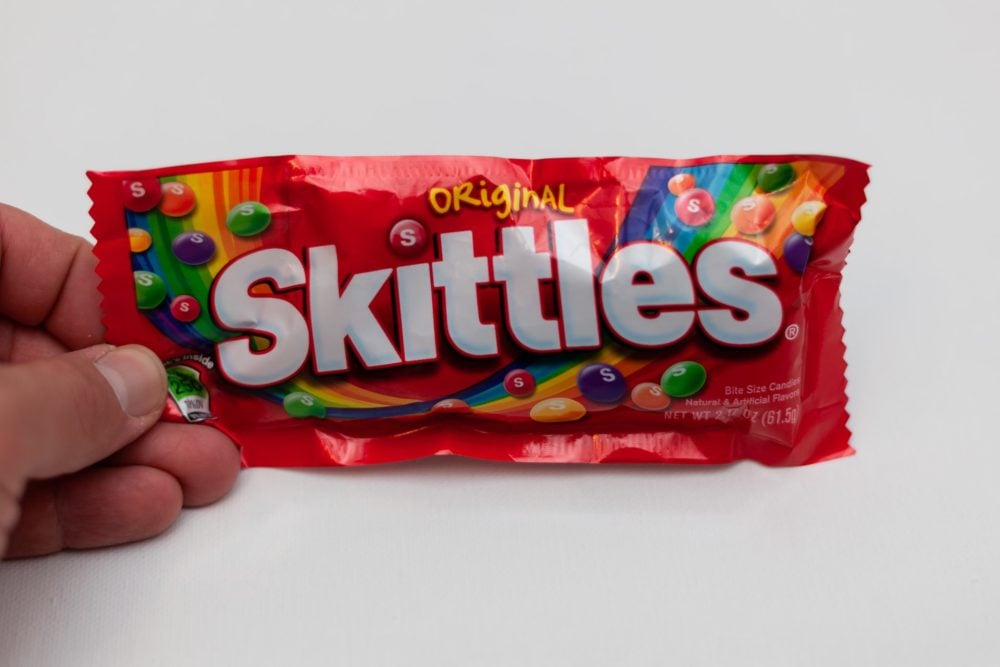 The most important thing to remember is that a vegan is someone who completely removes animal products from their lives. This doesn’t just include their diet. This means anything that has been produced by an animal, such as wool, honey, horsehair, and feathers.

Whereas someone who is plant-based only removes animal products from their diet. This difference is partly based in ideology and the reason why someone has chosen to become a vegan or take up a plant-based diet.

People who choose a plant-based diet can do so for many reasons. These often relate to their own health or concerns over the environment. They will also often become plant-based to reduce animal suffering.

This might just sound like a vegan. But a vegan will completely restrict their consumption to products with no involvement from animals or farming.

Some people who are plant-based for the environment or their health might call themselves vegan. And a lot of vegans are fine with this. But there are some who believe that this is an incorrect label. And that only people who completely reject the use of animals to produce for human beings.

So, let’s take a look at what exactly is in Skittles.

As you are probably aware, as well as the original flavors, there are several different versions of Skittles. They all have a similar basis but their manufacturing process and ingredients will vary. So, let’s go through some of the different kinds of Skittles and see just how vegan they all are.

As you can see, none of the ingredients in these three types of Skittles are derived from animals. This means that they are suitable for vegans. But, they do contain a version of palm oil so it might not be suitable for everyone.

Ingredients to Look Out For

When you begin a vegan diet, it can seem like almost everything has a non-vegan ingredient. Even if it is just 1% milk protein. This can be infuriating but we promise it’s still worth it!

More and more manufacturers are labeling their accidentally vegan foods and many are also altering their recipes to remove any animal products. This is a great move that will give you so much more diversity in your diet. But will also help save the planet and animals!

But while we’re here, let’s just mention a few ingredients that you often find in candy and need to be wary of.

There is a surprising number of products that have been produced without any animal products, simply because the manufacturers didn’t consider it to be necessary. These are often referred to as “accidentally” vegan products.

So, now you have the exciting knowledge that Skittles are vegan, what other candy is accidentally vegan?

Purple Skittles, both the purple Skittles in the regular packet and the packet that is colored purple (Wild Berry Skittles), are now vegan.

Wrigley, the owners of Skittles, have recently made all flavors of the regular line of Skittles vegan, meaning you can now snack on your favorite chewy fruity sweets to your heart’s content.

However, you should bear in mind that some limited edition Skittles may not be vegan, and any older packets of Skittles you may have in your cupboard may not be vegan either if you bought them before they changed.

Skittles of the past may have contained gelatine and carmine, both of which are, of course, derived from animals meaning they are decidedly not vegan.

You should also look out for both of these ingredients on any packet of SKittles you buy from the store in case they have old stock out.

Are Skittles no shell vegan?

Yes! No Shell Skittles (or naked Skittles as they are comically referred to) have been vegan since the beginning.

They were released in the United Kingdom especially for vegan fans of SKittles and have since made their way across the globe for vegan skittles fans everywhere.

They contain no carmine or gelatine and are made using vegan-friendly ingredients and flavorings so you can snack on them guilt-free.

They are essentially chewy Skittles without the hard, outer shell. They do, however, have all the same flavors as regular skittles so you won’t be missing out on all your favorite flavors.

We always thought the insides were the best bits anyway! What’s more, they taste a lot like everyone’s favorite non-vegan sweet - Starburst, which is always a good thing!

They are a little trickier to get a hold of but they have made their way across to the US so keep an eye out in your favorite candy stores or grocery stores.

So, overall, the answer is yes, Skittles are vegan. But, many Skittles products include palm kernel oil. This is a type of palm oil for which palm trees need to be felled. So, if you are willing to, boycotting products will any kind of palm oil will reduce your environmental impact.

There are lots of different versions of Skittles so it’s worth double-checking the ingredients list. But as you have seen, this is true for a lot of candy. Always check the label so you don’t accidentally eat something that isn't vegan. But you also might miss out on some great accidentally vegan snacks!