Cointreau is an absolute staple of any cocktail set. If you don’t have Cointreau then you absolutely do not have the right collection of liquors.

One issue is that Cointreau is a bit pricey. It’s more affordable than Grand Marnier (one of our substitutes!) but more expensive than a good off-brand of Triple Sec. There may be other reasons you don’t want to use Cointreau. For example, if you want a non-alcoholic drink such as a “virgin margarita,” you can’t use Cointreau, Triple Sec, or any orange-flavored liqueur.

If you want a non-alcoholic option, you can use orange flower water, orange juice concentrate, or orange juice. You can also try orange extract. For premier high-end cocktails, we recommend Grand Marnier as an orange liqueur, but it’s expensive.

But, if you’re in the middle of making a drink and have realized that you have run out of Cointreau. Or maybe you’re just a bit sick of it (we’ve all got certain liquors that we can no longer go near…). What can you use instead?

As with many liquors, there are some really great alternatives for Cointreau. You don’t have to compromise on taste if you don’t want (or can’t) have Cointreau in your drinks.

Before we get into what to replace Cointreau with, it’s useful to know exactly what kind of liquor it is. One way to make the absolute best cocktail is to understand exactly what you’re using.

Once you have a good understanding of different liquors and cocktail ingredients, you will be able to pour perfect cocktails. You might even be able to start making your own! 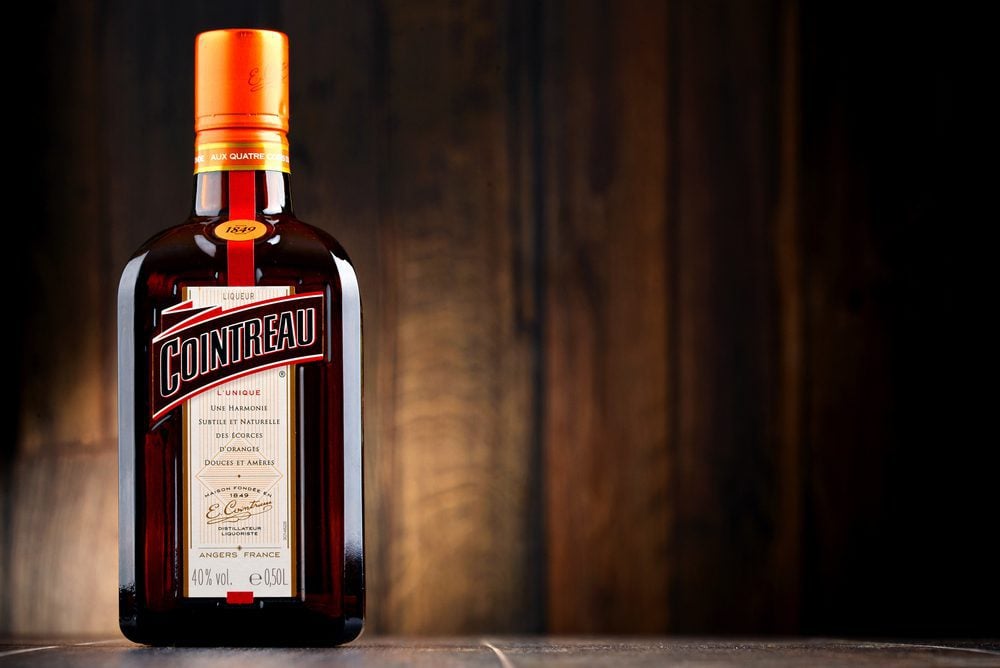 Cointreau is so famous that many people believe it to be a type of liquor itself. But Cointreau is actually a type of triple sec. If you know anything about cocktails or alcohol in general, you will likely have heard of triple sec before.

There are other Cointreau flavors, such as blood orange. But, unless the liquor is made by Cointreau, it is a triple sec.

Cointreau is a brand created by the company Rémy Cointreau. It was first produced in 1875 in Saint-Barthélemy-d’Anjou in France.

These are the basics but the recipe itself is kept secret. Rémy Cointreau is a family business and the recipe is known only to the family.

It is known, however, that the recipe includes sweet and bitter orange peels. The alcohol is pure alcohol derived from sugar beets. But the exact measurements, other ingredients, and production methods remain a mystery.

What is Cointreau Used For?

Cointreau is a very famous product. It is used in famous cocktails such as margaritas and cosmopolitans. It can also be drunk neat or with ice.

As it’s quite a strong alcohol, it can be difficult to drink neat. But, the cocktails it is included in are also quite strong and pack a punch themselves.

As it is flavored, it is easy to assume that Cointreau can be drunk easily. But this isn’t always the case. This is another great reason to swap out Cointreau for something with a lower alcohol content.

Cointreau is a delicious liquor but there are so many options available.

They are a little different but just as great. So, now that you have a basic understanding of what Cointreau is, what can you use instead?

As you have likely already guessed from the information above, it is possible to use another type of triple sec.

If you enjoy the taste of Cointreau but want something with a lower alcohol content, then you should consider another orange-flavored triple sec.

There are plenty of options available. Triple sec is a standard feature of any bar, whether that’s a professional bar or the one hidden away in a cupboard in your home.

As mentioned above, Cointreau is a specific product and name for a type of triple sec. So it’s very easy to get a different version. (Even if it’s just off-brand).

When Cointreau first came out, it was called “Curaçao Blanco Triple Sec”. But triple sec and curaçao are different types of liquor.

That said, you can definitely use Curaçao as an alternative to Cointreau. Curaçao can come in a range of flavors. But classic curaçao is made from the peel of a bitter orange.

It is made from a very specific orange called a “laraha”. It is now also known as a “Curaçao orange”. As Curaçao is a type of liquor, it comes in a range of alcohol contents. This is usually between 15% and 40%, or 30 to 80 proof.

This is a great option if you’re looking for that delicious Cointreau taste without the high alcohol content. It has a similar consistency to Cointreau and will work just as well in cocktails.

Although triple sec and curaçao are types of liquor, one specific brand that can be used as a substitute to Cointreau is Grand Marnier.

Grand Marnier is a brand of French liquors, first produced in 1880. So very close to the first production of Cointreau.

Grand Marinier might even become your preferred liquor over Cointreau. It has won multiple awards and is a very popular drink across the USA. It has associations with the Ritz and Savoy hotels in London. So it is considered to be quite an elegant tipple.

What can I use if I don’t have Cointreau?

Cointreau – an orange-flavored type of triple sec – features heavily in cocktail recipes and some of the most famous alcoholic concoctions, but what can you substitute it with if you don’t have any to hand and a recipe calls for Cointreau?

The most obvious alternative is another brand of orange triple sec, seen as Cointreau is a brand rather than a type of drink itself.

Curaçao is another alternative to Cointreau. It’s a sweet digestive liqueur made with wine or grain spirit-sugar and orange peel. Curaçao can come in a range of flavors, but the classic Curaçao is made from the peel of a bitter orange, so it’s pretty similar to Cointreau and you’re unlikely to notice the difference if you use it in a recipe. It’s also ideal if you’re looking for a liquor with a lower alcohol content, as it comes it varies between 15% and 40%, or 30 to 80 proof.

Grand Marnier is a brand of French liquors and was first produced in 1880, which is around the time Cointreau was invented. Like Cointreau, it has a high alcohol content of 40% or 80 proof. The most popular is the Grand Marnier Cordon Rouge, which is orange-flavored, as is Cointreau.

Can you use orange juice instead of Cointreau?

Orange juice will work well in non-alcoholic cocktails, while the other orange-flavored options are great for baking recipes that call for Cointreau.

Is Triple Sec and Cointreau the same thing?

There is lots of confusion between Triple Sec and Cointreau.

Triple Sec is actually the general term for any clear dry orange-flavored liqueur, including Cointreau, which is a type of Triple Sec. Usually, alcohol labeled ‘Triple Sec’ is lower in quality and cheaper to buy than Cointreau. Triple Sec also has a less complex flavor – almost like an orange-infused vodka.

Cointreau was introduced in the 1880s in France, and is a clear, orange-flavored liqueur made from sweet and bitter orange peels. Cointreau has a balanced flavor which is somewhere between bitter and sweet, with warm spices that add complexity and nuance compared to regular triple sec. It’s also characterized by its fragrant aroma and smooth, clean finish.

So while Cointreau is a type of Triple Sec, it’s not quite the same thing. Though you could easily substitute Cointreau with an off-brand Triple Sec.

Is Grand Marnier a substitute for Cointreau?

Grand Marnier is slightly different to Cointreau, as it’s made with cognac and bitter oranges, and, as a result, is considered to be of the curaçao style.

Cointreau has a much cleaner and brighter orange flavor, with a stronger orange oil aroma, whereas Grand Marnier tastes sweeter and heavier, bringing with it all of the flavors you’d expect in a liqueur made with a barrel-aged spirit: with notes of vanilla and a subtle oaky sweetness.

If you’re using  Cointreau instead of Grand Marnier, consider using slightly more Cointreau – roughly an additional 1/8oz per oz to account for the weight and sweetness that Grand Marnier would provide.

So, there you have it. These are just a few ideas for how to substitute Cointreau.

Cointreau is a famous liquor and justifiably so as it is delicious. But, as with many brands, it has become synonymous with triple sec and Curaçao.

If you are thinking of branching out and trying something new, these are all great (and delicious) ways of doing just that. You can also try Orange liqueur, white grape juice, apple juice, lime juice, or cranberry juice in your next cocktail. Have some fun with it. Maybe get crazy and try apple cider or pineapple juice too!

These options are sure to be a hit. So, gather your family and friends and enjoy. Let us know your thoughts!
5 from 5 votes
Print Recipe Pin Recipe
Total Time 10 mins
Course Drinks, Substitute
Cuisine American
Servings 4
Calories 210 kcal

Calories: 210kcal
Keyword cointreau substitutes
Tried this recipe?Let us know how it was!