Here at the Kitchen Community, we love and appreciate the incredible flavor experience that is Indian cuisine.

As many of our readers will already know, Ghee is one of the key ingredients in traditional Indian cooking.

Ghee has many nutritional benefits, including a high vitamin and mineral content as well as fatty acids and antioxidants. Of course, as a type of clarified butter, Ghee is very high in fat, but this makes it a delicious deep-frying agent. 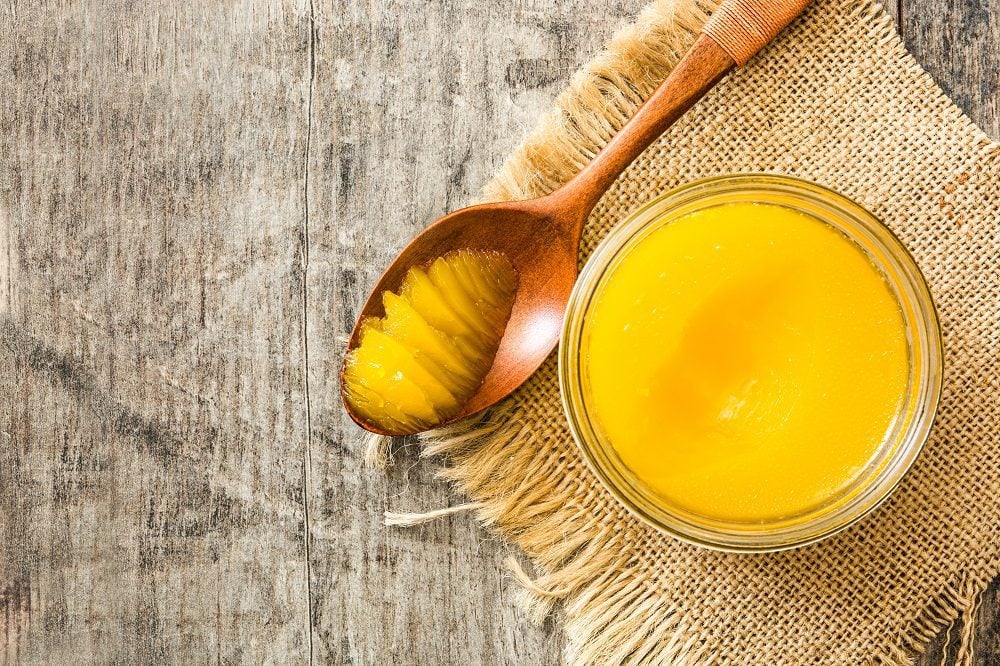 However, the reality is that not everybody has access to or is able to consume Ghee. Compared to regular butter, Ghee is very expensive. It’s also not the best choice if you’re trying to cut back on fat in your diet.

Moreover, because Ghee is a dairy product, it is not suitable for people with lactose intolerance or those who follow a plant-based diet.

Luckily, though, there are plenty of ingredients that can be used as substitutes for Ghee in Indian recipes. Some may be a little tricky to find, but you may be surprised to find that you already have some of the top 10 Ghee substitutes in your pantry at home! 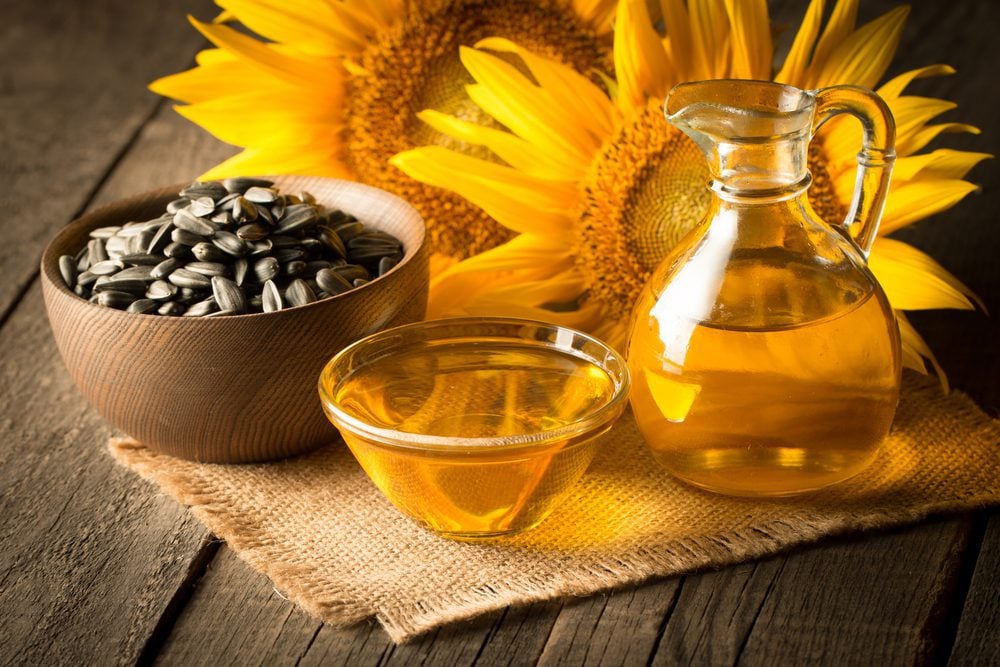 If you’re looking for an easy, inexpensive, and highly accessible substitute for Ghee, look no further than sunflower oil!

You can use sunflower oil as a Ghee substitute at a 1:1 ratio, but you would have to cut back on moisture from another ingredient in your recipe. If this is not possible, you can simply use 3 parts sunflower oil for every 4 parts Ghee.

Because sunflower oil has a distinctively nutty flavor, it makes the perfect replacement for Ghee, which delivers a similar aftertaste.

Canola oil is another great Ghee substitute. Like sunflower oil, it has a smoking point close to that of Ghee. This ensures that the cooking times will be roughly the same and that as many nutrients as possible will be retained.

The reason we have suggested canola oil as a follow-up from sunflower oil is that it can be incorporated into recipes using exactly the same ratios. Canola oil can replace Ghee at a ratio of 3:4, which wouldn’t require any further changes to your recipe, or you could deduct moisture from another area of the recipe to allow for a 1:1 substitution.

If part of the reason you want to replace Ghee in your cooking is that you don’t enjoy the taste, canola oil may be one of the best choices for you. Canola oil really doesn’t taste of anything, which some people may see as a disadvantage, but when you’re cooking with such intense spices as are present in Indian recipes, nobody is likely to notice.

Sesame oil makes a fantastic substitute for Ghee. It may not be the most accessible replacement on our list, but in terms of flavor and ease of substitution, it’s hard to beat.

The sesame flavor really comes through in cooking, which makes sesame oil an ideal Ghee substitute because it mimics the strong, nutty flavor of the original ingredient.

Just like sunflower and canola oil, you can incorporate sesame oil into your Indian recipes instead of Ghee, using a 3:4 ratio.

While you can get different blends of sesame oil, and all are appropriate substitutes for Ghee, we would primarily recommend toasted sesame oil if you can find it. This is because toasting the sesame seeds exposes them to extreme heat, which brings out the natural flavors even further.

Coconut oil is a little on the expensive side, so this won’t be the ideal substitute for all budgets.

As we have already mentioned, the key flavor of Ghee is a nutty one that infuses food with flavor as it cooks. Coconut oil, therefore, is a good choice of replacement in terms of flavor.

The taste is not exactly the same, but it’s close enough to make a convincing substitute when combined with all the other flavors in your dish. Besides, it’s delicious in its own right, and the mellow nuttiness of the coconut will blend beautifully with your other ingredients.

Coconut oil is thicker than sunflower, canola, or sesame oil, so you can go right ahead and substitute on a 1:1 ratio without altering any other components of your recipe. 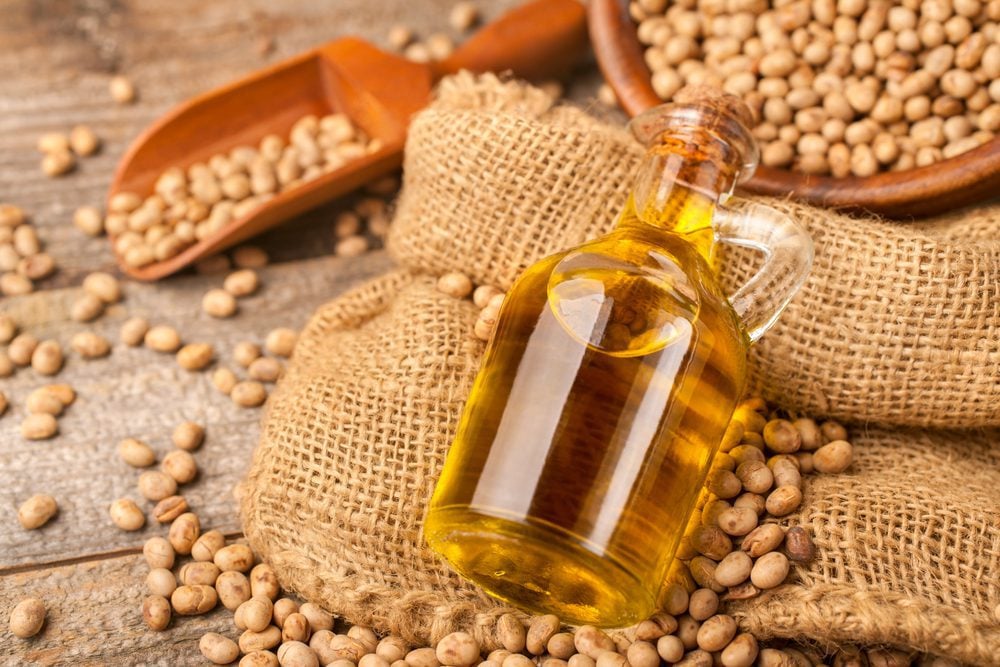 Have you ever tried soybean oil? If you answered ‘no,’ we highly recommend giving it a try. And what better way to try soybean oil for the first time than as a substitute for Ghee in a delicious Indian dish?

Soybean oil actually has a very mild flavor, so you’re unlikely to notice it too much once you’d added all the flavorsome ingredients and spices to your recipe.

With that being said, soybean oil makes a solid replacement for Ghee in terms of consistency, as long as you remember to add it in a 3:4 ratio rather than 1:1. Your recipe will be too moist, otherwise, and you will need to accommodate for this by limiting moisture elsewhere in your recipe.

This is another substitute that you may already have in your kitchen, and you’d be surprised at how well such a simple staple oil works as a Ghee substitute!

Like Ghee and some of the other oils we’ve mentioned so far, olive oil is known for having a nutty flavor. Some other mild flavors are also discernible, such as peppery and citrus notes, but if anything, these will enhance the taste of your dish rather than interfere with it.

Olive oil isn’t the cheapest option when it comes to Ghee substitutes. However, it is certainly much healthier than Ghee, and indeed, most of the oils and butters featured in our selection.

A whole host of medical benefits have been linked to the consumption of olive oil, including a high antioxidant content, anti-inflammatory properties, protection against heart disease, stroke prevention, and more. If you’ve been searching for a healthy Ghee substitute, here it is!

Use the standard 3:4 ratio when using olive oil instead of Ghee.

Rapeseed oil is another highly versatile oil type that works well when cooking most dishes, including as a substitute for Ghee.

It does have a nutty aftertaste, but this is relatively mild and likely to be mostly overpowered by the other flavors in your dish, so even if you’re not a fan of the nutty taste of Ghee, you could probably still use rapeseed oil as a substitute.

Rapeseed oil also has many beneficial qualities. It contains plenty of unsaturated fat as well as lots of vitamin E, the consumption of which has been linked to superior eye function and health.

Unfortunately, rapeseed oil also contains high levels of erucic acid, which has been linked to certain heart conditions when consumed in excess. Therefore, we would only recommend this oil as an occasional substitute.

If you do want to use rapeseed oil in your cooking, add 3 parts oil for every 4 parts Ghee.

Vegetable oil is a kitchen staple that most cooks will have access to. Luckily, it also happens to be a decent Ghee substitute.

Vegetable oil tends to taste quite neutral, and in any case, it would be hard to predict flavor since this type of oil is often a combination of extracts from various seeds, nuts, grains, and fruits.

With that being said, if you’re looking for something that will add moisture to your dish in place of Ghee and won’t alter the flavors too much, vegetable oil is a sensible choice.

Another great thing about using vegetable oil as a Ghee substitute is that it can be substituted at a 1:1 ratio without any other moisture reductions, unlike some of the other oils on our list.

Of course, this won’t be the ideal substitute if you’re trying to cut down on dietary fats or if you follow a plant-based diet, but if you don’t have any aversions to dairy and don’t mind the high fat content, clarified butter is about as close a substitute as you can get.

Clarified butter is an especially good choice for Ghee substitution if you’re planning to deep-fry any components of your dish. Deep frying in clarified butter leads to a crisp consistency that will enhance the textural experience of your dish without interfering with flavor combinations.

You can use clarified butter and Ghee in the same quantities because the ingredients are so similar to one another, so simply add 1 part clarified butter for every part Ghee required by your recipe. 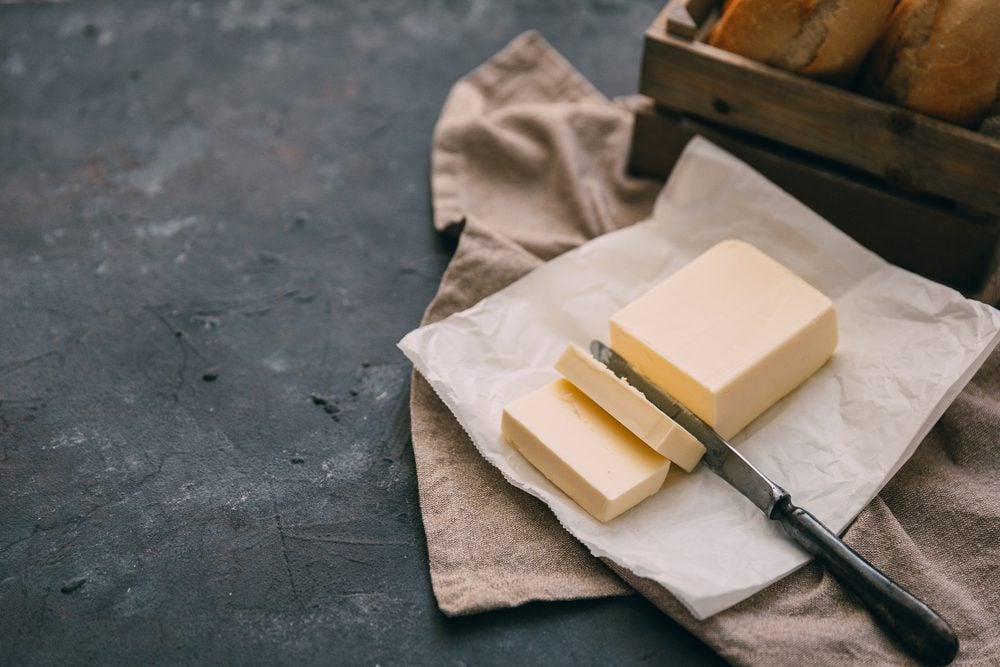 Finally, there’s nothing wrong with using good old-fashioned butter as a substitute for Ghee.

Once again, if you’re vegan or lactose-intolerant, this won’t be the substitute for you, although you can find plant-based butter alternatives on the market. If you choose to use one of these alternatives, however, please be aware that they may not yield the same consistency.

Butter has a similar consistency to Ghee, but it doesn’t have the same nutty flavor. You can contribute this flavor yourself through the use of other ingredients or enjoy the substitution as it is. Adding olive oil to the mixture can really help to bring out the desired nutty taste, although this might require some math in terms of moisture ratios.

If you aren’t adding any additional moisture, you can use butter as a Ghee substitute by adding it to your recipe at a 1:1 ratio. No other corrections or changes in measurements are necessary.

What is Ghee made of?

As we have mentioned previously, Ghee is a type of clarified butter. It is made from dairy, much like regular butter, but the preparation process is different, which is why the food has its own name and unique nutritional value.

Ghee is made by heating up butter until the fat separates from the rest of the formula. This separated oil is what we know as Ghee.

Is Ghee bad for you?

When consumed in moderation, Ghee is unlikely to produce any negative health effects. With that being said, there are some nutrients in Ghee that can cause problems if consumed in excess or too regularly.

For instance, the composition of Ghee is almost 50% saturated fat. Saturated fat has long been linked to a buildup of bad cholesterol, which, in turn, may lead to factors that can cause heart disease.

With that being said, some of the fatty acids in Ghee have been linked to improved digestive health.

Like most foods, the key to consuming Ghee without incurring any adverse health effects is to monitor your consumption of macronutrients throughout the day to make sure that you aren’t getting too much saturated fat in your diet. 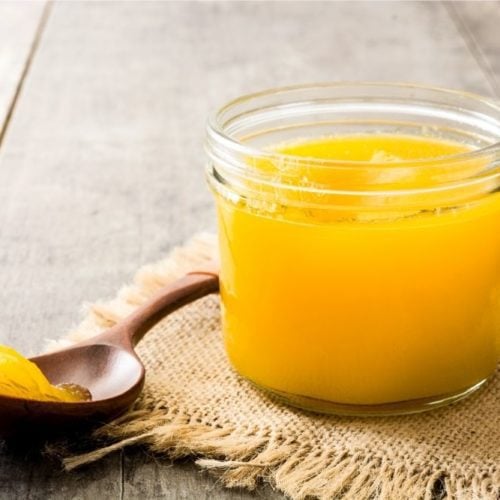