Gumbo is a dish that beats with the heart of Louisiana culture – a meaty spicy, warming melting pot where every mouthful is different, and every bite leaves you wanting more. It is both traditional and always re-inventing itself, and often, you’ll find every house on a Louisiana block has its own signature version.

That’s at least a part of the point. Gumbo is individual, and yet communal. Unique, and yet familiar. At least partly mystical, while always intensely practical. It’s the essence of society and civilization, the essence of the United States of America, and very specifically, the essence of Louisiana, all in one. 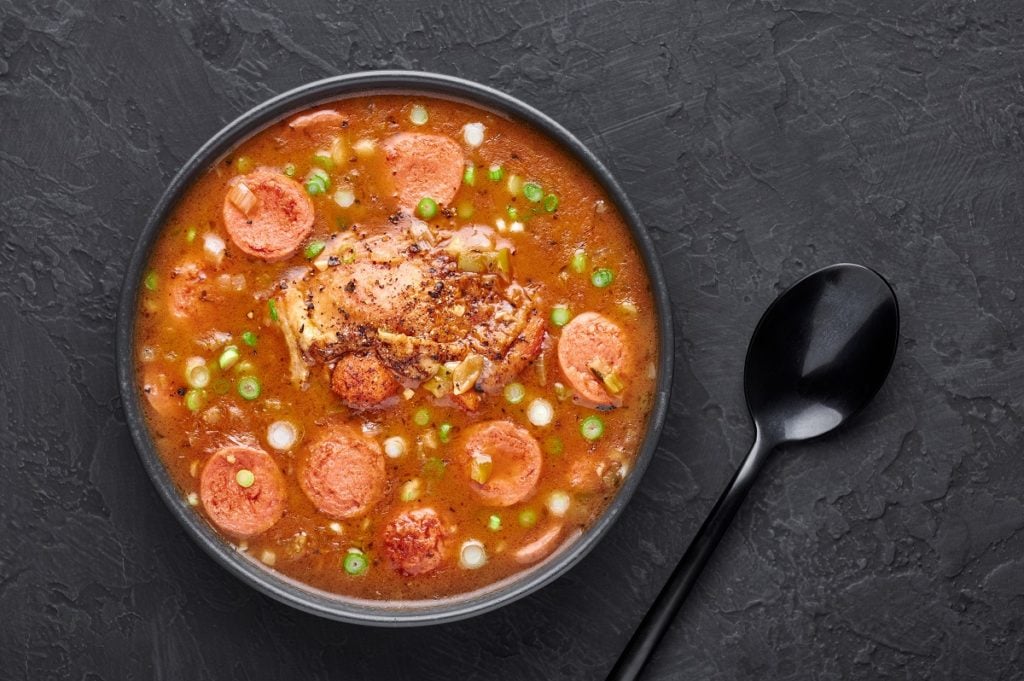 Filé powder is a traditional thickener and flavoring element in Louisiana gumbo, but here’s the thing. Some people can’t jive with it – and plenty of other people simply can’t find it on the shelves of their local stores. So what do you do if you want to get your gumbo on, and you want the same thickness of stew that the filé powder would give you – but without the filé powder itself?

The first thing we need you to do is to not panic. Sure, filé powder is traditional in some gumbos, but it’s not traditional in all of them, and if you’re looking to thicken your stew, we’re fairly sure people all over the world have been doing that for centuries in their own ways, without access to the magic that is filé powder. So, relax. We’ve got you covered when it comes to substitutes for file powder.

Let’s spend a minute understanding what filé powder, where it comes from, and what it adds to a gumbo. That way, we’ll prime ourselves to understand the effects we’re looking to add to our un-filéd gumbo.

Filé powder – what is it?

Filé powder is almost as important in a gumbo symbolically as it is for its thickening or flavoring aspects, because of what it represents. Gumbo is the melting pot, the symbolic dish of American history, and is mostly a mixture of West African, Spanish, and French cuisines.

What the filé powder represents is the Native American contribution to the land, the people, the blending of life that is gumbo. Leaving it out or substituting it certainly hurts, but it hurts more on that symbolic and philosophical level than it does on any culinary level.

Filé powder is usually made by drying the leaves of the sassafras tree, then grinding them down to a powder. The powder adds an earthy note to your gumbo, as well as helping to thicken up the stew in which your meats, fish, seafood, and vegetables will cook.

But if you can’t get the filé powder, there are tried and trusted alternatives you can use.

Cornstarch is one of life’s little miracles. It’s a thing that makes cooks everywhere smile, because it has a neutral flavor, and thickens any darn thing to which you add it. Got yourself a thin soup that needs body? Cornstarch. Custard too runny? Cornstarch. It’s a superhero additive for whenever you need to make something with body.

Cornstarch is fantastically neutral. It rarely if ever announces itself in terms of a flavor profile, and if you have a gumbo anywhere near worth serving, it will already be full of robust, hearty flavors that will overpower the cornstarch on that level – as you want them to. But one tablespoon of cornstarch mixed with one tablespoon of water should thicken one cup of gumbo stew. Simply scale up the recipe to thicken the whole of your stew.

Where cornstarch won’t help you is in replacing that earthy note in the stew that the filé powder naturally imparts.

You’re going to think we’re nuts here, but try adding some root beer to your cornstarch-thickened gumbo. No, it won’t give you exactly the same earthy note as the filé powder would, but it’ll get you much closer than you imagine, and in a stew as complex and multi-flavored as a gumbo, you don’t need to get all the way there. Get quite close and your brain and your taste buds will do you a solid and close the loop of experience.

Arrowroot powder is another neutral thickener that will give your gumbo the swirling, thicker heart you’re used to, without using filé powder.

Arrowroot powder will give you a clearer gumbo than the likes of cornstarch, and will sustain its thickening action even if, say, you’ve had to freeze some of your gumbo between groups of guests descending on you to celebrate. That’s somewhat chemically weird, but you have to admit it’s also chemically wonderful, in that you can create a long-life gumbo without the filé powder you might otherwise use.

As with cornstarch, arrowroot adds little if anything to a dish that’s already as complex and highly flavored as a gumbo, but again we say – check out the root beer. We know, we know – madness.

But it works. Thickened, chemically sustained gumbo with an earthy note that’s close enough to get you where you need to be? That has to be worth checking out if you can’t get hold of filé powder.

Okra has long been a base for a lot of West African soups and stews, and there’s already a traditional version of gumbo that uses okra as its thickener. The dish has a long connection to Okra – in fact, one of the main claimants for the name of the dish is the Central Bantu word for okra – “gumbo.”

The other main claimant is the Choctaw word for file, which is “kombo.” It’s more than a little ironic that both theories name the dish after the thickening ingredient, and that in many parts of Louisiana, the Native American filé powder replaced the okra in the traditional West African stew.

If you want to go completely back to the West African roots of the dish, you need to be a little careful as to how and when you add your okra. Once all the main ingredients, including all the proteins and vegetables, slice up some okra and add to the dish.

If you simmer your gumbo just a few minutes more, the okra will add its characteristic thickening magic to the stew. Add your okra too early and you’ll run the risk of overdoing the effect, and while you won’t exactly break your wrists trying to stir the stew, there’s every chance it will be thicker and more… gelatinous than you want it to be.

Like okra, eggplant gives you both a thickening effect and an addition to the flavor profile of your gumbo. If you’re not keen on the mucilaginous qualities of okra, or if you feel like a thickening agent with a creamier note to work with all the usual spicy flavors of a gumbo, eggplant could be your friend.

For a bonus touch, drizzle your eggplant in bacon fat (Because bacon fat rules, baby!) before roasting your eggplant and blitzing them in a blender. Add towards the end of your cooking time, as with the okra, and simmer a little longer for a gumbo with a moreish thickness and that indefinable earthy note supplied by the bacon fat.

Yes, it’s French, but this is Louisiana cuisine, ma chere, if you missed the memo that French is in, you’ve missed… quite a few history classes.

Usually to make a roux, you cook wheat flour in butter, but for a truly Southern experience, substitute the butter with melted bacon fat, because bacon fat is life. Cook off your roux first, and allow it to go fairly dark for a richer, warmer color and flavor. Then add your proteins and vegetables to the mix and gumbo as usual.

Widely used in Mexican cuisine, nopal leaves are a type of cactus with a tart flavor but a similar thickening effect to okra. You can chop the leaves and add them at the same point as you would okra for that whole mucilaginous texture. Thankfully, they’re available bottled or canned, so you’re not dealing with cactus spines while preparing your gumbo.

All these options will give you a thickened gumbo, with a number of different taste profiles to choose from – whether you add the likes of root beer to give you an earthy, slightly sweet note, or whether you go savory with bacon fact-drizzled eggplant. They won’t quite give you the same flavor as the filé powder you’re leaving out, but they will help make the gumbo more unique to you.

You can also try other Cajun seasoning, creole seasoning in your okra gumbo or any other gumbo recipe. Creole gumbo and sausage gumbo is a favorite in my house. I'll be posting my favorite jambalaya recipe shortly. It's loaded with smoked sausage and delicious chicken.