The core tenants of bread making have remained largely unchanged for thousands of years. In fact, bread is considered one of the oldest foods not found ready-made in the wild.

Contents show
What is This Mystery Flour?
Why You Shouldn’t Use Self Raising Flour for Bread
What’s the Difference Between All Purpose Flour and Bread Flour
Why is All-Purpose Flour the One to Use?
How to Make the Substitution
Autolyse
Gluten Supplementation
Frequently Asked Questions
How do you make all-purpose flour into bread flour?
Can I use plain flour instead of bread flour?
What happens if I use all-purpose flour instead of bread flour?
What is the difference between bread flour and all purpose flour?
Final Thoughts
Bread Flour Substitute: Can You Use All Purpose Flour?
Ingredients 1x2x3x
Instructions
Notes
Nutrition
Related Posts:

Flour is one of those ingredients that changed the course of human history and is likely to be a vital component of humankind’s evolution into a modern society. Thanks to flour, we have delicious foods like bread, cakes, and pies. Indeed, it’s hard to imagine our life without this essential staple.

Four can also be pretty dangerous, as when flour dust is introduced into a local atmosphere, it becomes explosive, as it’s a flammable substance. You may have seen this trick used in movies or TV shows like McGyver. And Archaeological evidence suggests flour may have been around since 6000 BC.

It requires three fundamental ingredients: water, yeast, and flour…bread flour to be exact, but what are your options if you don’t have any bread flour?

Well, it may interest you to know that while bread has been around for centuries, bread flour was only invented in 1902 in Boston, by African American inventor, Joseph Lee.

So, needless to say, there are other ways of making bread that have kept people fed and happy for at least 5000 years. 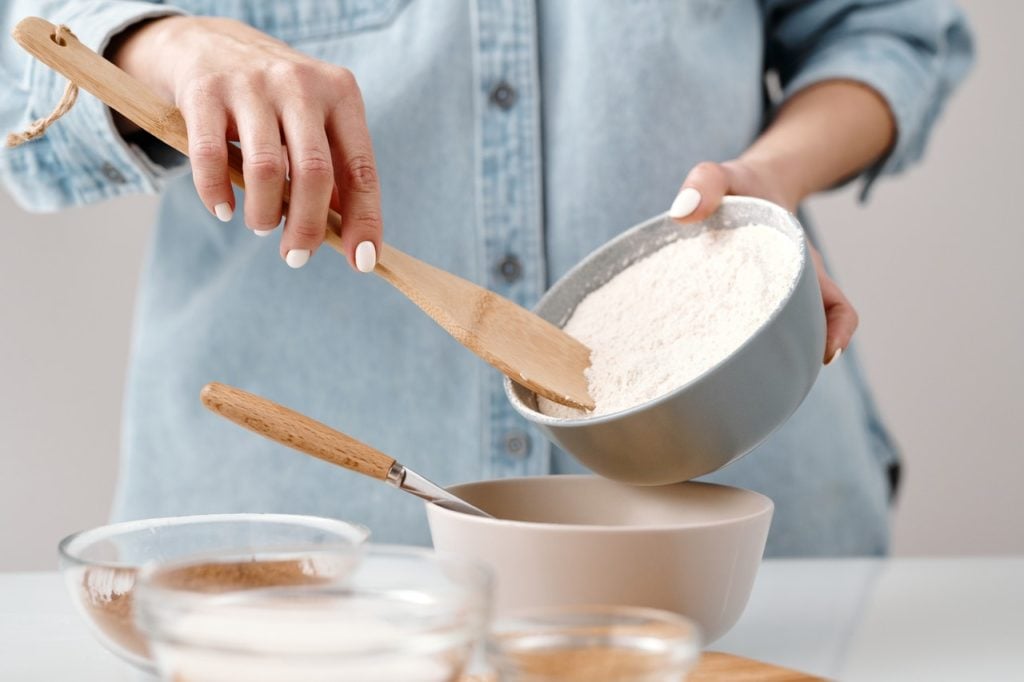 What is This Mystery Flour?

It’s nothing special. You’re going to kick yourself. The mystery flour that makes your baked dreams come true in the absence of bread flour is…plain old all-purpose white flour; that’s it.

No fancy blends of various specialist flours, no witchcraft or culinary wizardry, just boring, run of the mill plain flour.

This is actually great news because you almost certainly have some hiding in a cupboard somewhere just waiting for its time to shine!

You don’t even need to do any strange and difficult maths to figure out how much you should use in a recipe in place of the bread flour. Just use the same amount.

Why You Shouldn’t Use Self Raising Flour for Bread

In theory, self-raising flour seems like a fantastic option for making good bread.

Self-raising flour – as asserted by the name – helps baked goods to rise, and you need your bread to rise, or it’s really more of a cracker than bread. Surely it’s a match made in heaven, but alas, no! It’s really not.

The reason for this deceptively terrible pairing is that self-raising flour puts the proving period into hyper-speed, accelerating the process so significantly that the yeast doesn’t have time to act in the dough.

So, the options become…

1. Wait for the yeast to do its thing at which point the dough will be so immensely over proved that it will fall flat as a pancake when baked.

2. Omit the yeast entirely and cook the bread at a lightning-fast pace, which will yield a rather tasteless brick because yeast is the thing that gives bread its, well….bready flavor.

What’s the Difference Between All Purpose Flour and Bread Flour

The fundamental difference between AP flour and bread flour is their protein content. AP flour is between 10-11% protein. Bread flour on the other hand is 11-13% protein.

Bread flour also has things added to it retroactively that it doesn’t naturally include such as vitamin C (which AP flour does not contain) and barley flour, the latter of which augments the flour’s typical yeast content and helps to imbue baked goods with moisture.

Bread needs to produce lots of gluten in order to become the quintessential food we all know and love.

Gluten is a binder, a network of strands with high elasticity that make dough workable, and it gives bread the soft, cloudish, slightly chewy texture when it’s baked. When an experienced pizza chef spins their dough in the air, it’s the gluten that makes it flexible and holds everything together.

To produce this nervous system of stringy gluten, bread needs tons of protein, which is why bread flour is so handy. What you’re doing when you knead your dough is developing an internal gluten map that traps plenty of air which helps bread to rise and gives it its lightly craterous surface.

While the extra protein in bread flour helps to create greater and more complex gluten nets throughout the dough, the vitamin C actually strengthens the strands and gives them even greater elasticity.

This enables them to retain way more of the carbon dioxide released by the yeast as dough proves and bakes, facilitating a healthier rise. Some bread flours are even treated with ascorbic acid which helps to reinforce the glutinous webs to an even greater degree resulting in divinely chewy bread.

Bread flour also has plenty of variants of its own that share these bread making superpowers. It can take the form of white, whole wheat, bleached, unbleached, or organic flour, and it’s commonly used to make pizza bases, loaves of bread, baguettes, buns…you name it.

It’s not appropriate, however, for baking cakes as the protein would make it chewy rather than tender. 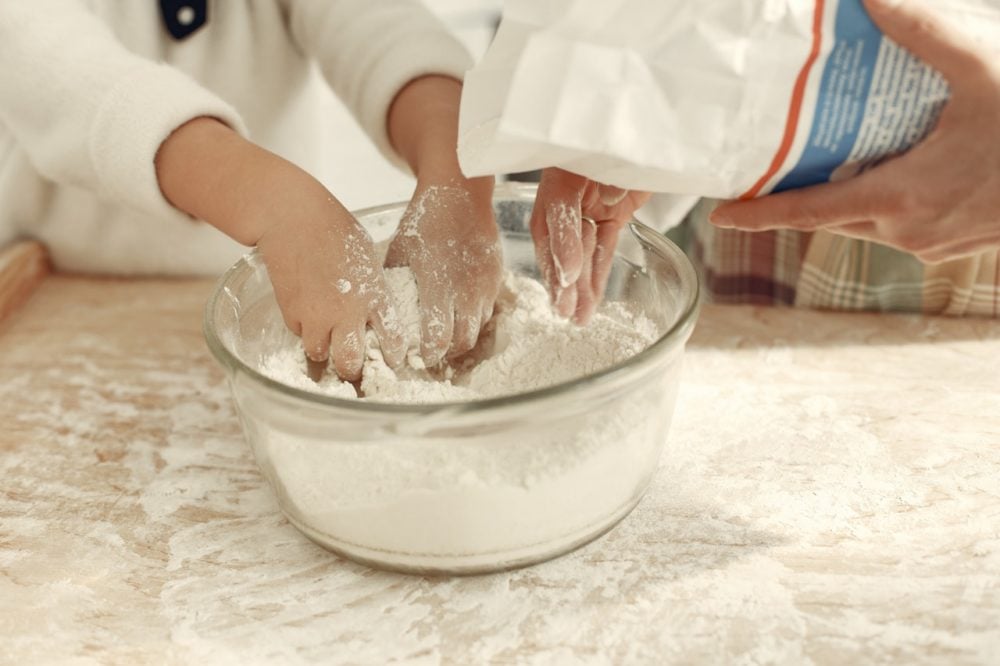 Why is All-Purpose Flour the One to Use?

Plain flour is the perfect substitution because it has the next largest protein content and features a well-balanced mix of hard and soft glutens.

Results may vary depending on the particular bread you’re trying to make.

Mixed grain breads like rye and barley, for example, tend to need the extra strong rising power of bread flour to handle the weight of the grains.

How to Make the Substitution

While I did mention at the start of the article that you can replace the bread flour in a recipe with the exact same amount of AP flour, it’s a little more complicated than that, the reason being, bread flour is quite a bit heavier than AP flour, so while you’re clear to throw in the same weight, measuring out that weight will differ.

For instance, if a recipe called for 145g/5oz of bread flour, that’s just one cup. A single cup of AP flour will only weigh around 125g/4 ½oz, so you’ll need to measure out slightly more.

There is going to be a difference in the final product when you make the switch to AP flour. The bread probably won’t rise so much and might end up with a slightly stodgy texture and mouthfeel, but there are measures you can take to reduce the risk of this happening.

Autolyse is a technique that helps the gluten in your bread dough be the best possible version of itself, improving overall extensibility and flavor, and it couldn’t be easier to do.

All it takes is combining your flour with the amount of water stated in the recipe you’re following, then leave it…that’s it!

Don’t knead it or anything; just leave it to rest for 20-25 minutes. Put your feet up for a while; brew a fresh coffee.

While you’re relaxing, the gluten in your dough is hard at work forming connections that will ultimately lead to a fluffier bread.

Once the resting period has elapsed, add the rest of your ingredients and knead as normal.

If you don’t think the natural gluten content in your dough is going to be enough, you can always transplant more in, galvanizing each cup of AP flour you use with two teaspoons of gluten.

How do you make all-purpose flour into bread flour?

And that’s it all done. You can substitute this mixture in a 1:1 ratio in your recipe.

Can I use plain flour instead of bread flour?

We’re pleased to report the good news that you can use plain flour in place of regular bread flour if you’re in a pinch, and you don’t have any bread flour to hand in your kitchen.

And it works vice-versa too, you can use bread flour in place of plain all-purpose flour.

But we’re going to be straight with you here – the results may not be exactly the same, and you may notice some subtle differences. And the results can also vary depending on the particular bread you’re trying to make.

It can be tricky to work out the weights you need for substituting plain flour for bread flour, and this is because bread flour is quite a bit heavier than plain all-purpose flour…

Anyway, here’s a repeat of the example we showed you earlier in the article: if a recipe called for 145g/5oz of bread flour, that’s just one cup. A single cup of AP flour will only weigh around 125g/4 ½ oz, so you’ll need to measure out slightly more.

What happens if I use all-purpose flour instead of bread flour?

But, even taking into account your modified measurements, any bread made with plain all-purpose flour will be noticeably different to any made with bread flour…

As we mentioned in our article earlier, the bread probably won’t rise so much and might end up with a slightly stodgy texture and mouthfeel…

There is good news, however. You can decrease the risk of this stodgy texture by using one of two techniques, namely autolysing and gluten supplementation.

For more information on substituting plain all-purpose flour for bread flour, please scroll back up the article to find out more.

What is the difference between bread flour and all purpose flour?

Bread flour also has extra nutrients added to it that are not found naturally in flour, such as vitamin C and barley flour.

Anyway, the extra protein in bread flour helps to create greater and more complex gluten nets throughout the dough. And this is good because the gluten works as a binder and also gives it more elasticity. Then, kneading the dough gets plenty of air trapped in the gluten nets, and the result is the bread’s soft, cloudish, slightly chewy texture.

Or if you have all the necessary ingredients, you could even make your own bread flour! Simply scroll back to find out how.

So, there you are, master baker. If you don’t have any bread flour or you just feel like giving yourself a challenge, unearth your all-purpose plain flour and get to work.

The bread might not end up being quite as exquisite, but fresh, homemade bread will always beat store-bought, bread flour or no. 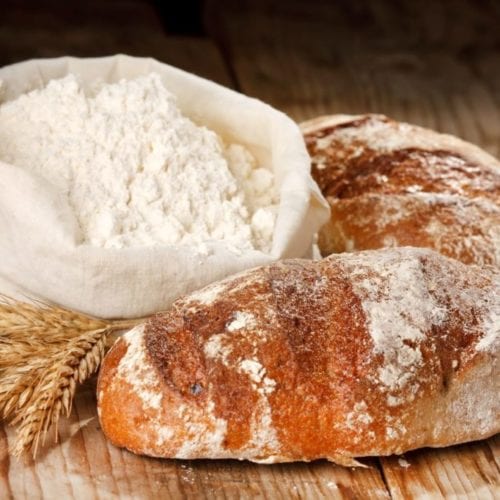 Bread Flour Substitute: Can You Use All Purpose Flour?

These options are sure to be a hit. So, gather your family and friends and enjoy. Let us know your thoughts!
4.80 from 5 votes
Print Recipe Pin Recipe
Total Time 9 mins
Course Substitute
Cuisine American
Servings 4
Calories 144 kcal

Calories: 144kcal
Keyword bread flour substitutes
Tried this recipe?Let us know how it was!