Hard boiled eggs are a great meal for breakfast, lunch, or even dinner! They make a perfect snack and can be eaten with anything from vegetables to crackers. 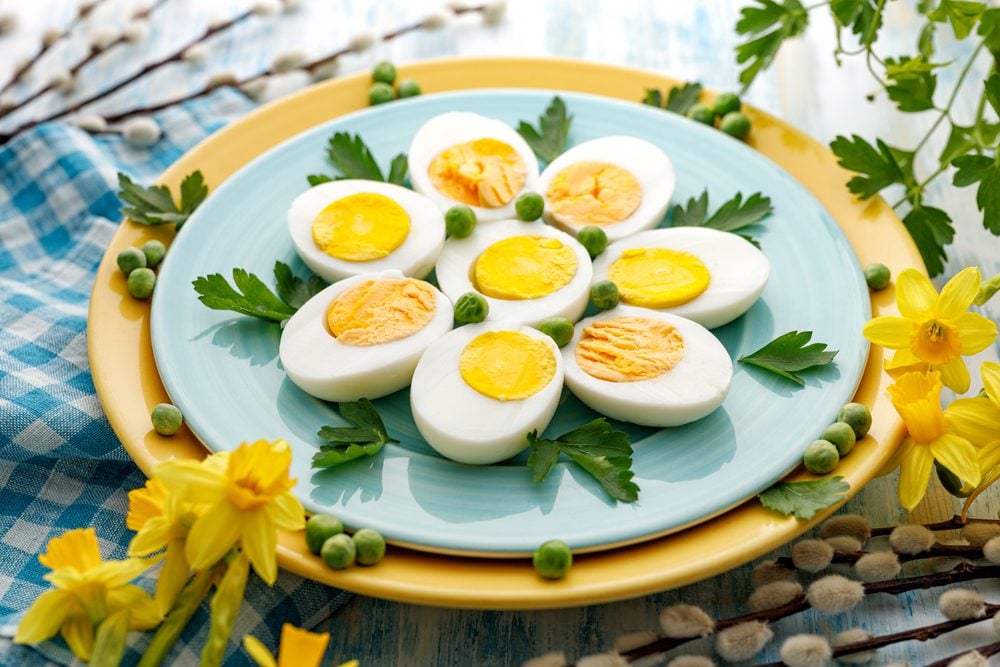 But how long do hard boiled eggs last? In this blog post, we will share the answer to that question and more!

The raw eggs have a thick shell protecting them, keeping any harmful bacteria from entering and touching the yolk.

When you boil your egg the shell becomes permeable and, in turn, susceptible to any bacteria.

Not only that, major producers spray on special chemicals so that the egg is even more protected. Boiling your eggs takes off all that added protection and cuts down the life cycle from weeks to days.

Having said that, you still have up to a week to finish your unpeeled hard boiled eggs before they end up going bad, and five days for peeled ones.

Your best bet is to mark the hard boiled eggs with the date of expiration so that way you never have to guess if they’re good or not.

If you’re asking yourself “how long do hard boiled eggs last in the refrigerator” then you know they can stay good for up to a week. But what happens when you leave the eggs outside of the fridge?

Since the outer shell of the egg becomes fragile when boiled, you can only leave it unrefrigerated for a couple of hours before they go bad.

Of course, the question of “how long are boiled eggs good for” all depends on the environment you leave them in.

If they are outside in the heat, you’re risking it if you leave them out for half an hour. Inside a home with air conditioning, you could keep them out for a couple of hours.

The reason for this time limit is because food can get into the “danger zone” of temperature.

This is a gauge from the USDA for leaving any kind of unpreserved food from 40 degrees to 140 degrees. Food at this temperature can grow bacteria more easily so you should never leave it for more than a couple of hours in this zone.

If the outer shell of the egg becomes brittle when boiled, you should refrigerate it immediately.

Keeping them at a low temperature is also beneficial for keeping food fresh.

You can store hard boiled eggs in many ways, like covered with wax or parchment paper, in the original carton of eggs, or in an airtight container.

The air-tight container is probably the best solution to the question “how long do boiled eggs last” because they will keep your eggs free from any kind of contaminants.

The Secret to Knowing If Hard Boiled Eggs Are Bad

You should hope you never have to deal with a hard boiled egg going bad because the smell can be truly awful.

If you follow the advice earlier in the article about labeling the expiration date, you will never have to deal with old eggs.

Without a date, one opening of the lid should be enough for you to know if the eggs are good or bad.

The smell is sulfuric and it resembles a dirty bog or swamp. If the shell is still on the egg you may have to peel it off to get to the smell.

If you peel your egg and it doesn’t have a smell but has a greyish pale color, don’t freak out!

Just because there is some discoloration it doesn’t mean the hard boiled egg is bad. The color can be altered due to the cooking temp and time.

The longer you cook the egg the paler and greenish-blue the yolk becomes. The process happens because of a chemical reaction between the white part of the egg and the yolk.

As it cooks longer, the iron from the yellow yolk mixes with the hydrogen sulfide from the white part.

Feel safe eating eggs with this color of yolk as long as you don’t smell a rancid odor coming from the eggs.

Can You Freeze Hard Boiled Eggs?

You can freeze your hard boiled eggs if you’d like to save them for another time. Instead of asking the question “how long do hard boiled eggs last in the fridge” you can throw them in the freezer and not have to worry about it.

The only problem is the egg white part is going to become inedible and be too tough to eat. You’ll have to separate it from the yolk before freezing because the yolk is the only part that you’ll be able to eat.

You can use the frozen yolks for deviled eggs or other kinds of tasty apps whenever you’re ready to eat them. 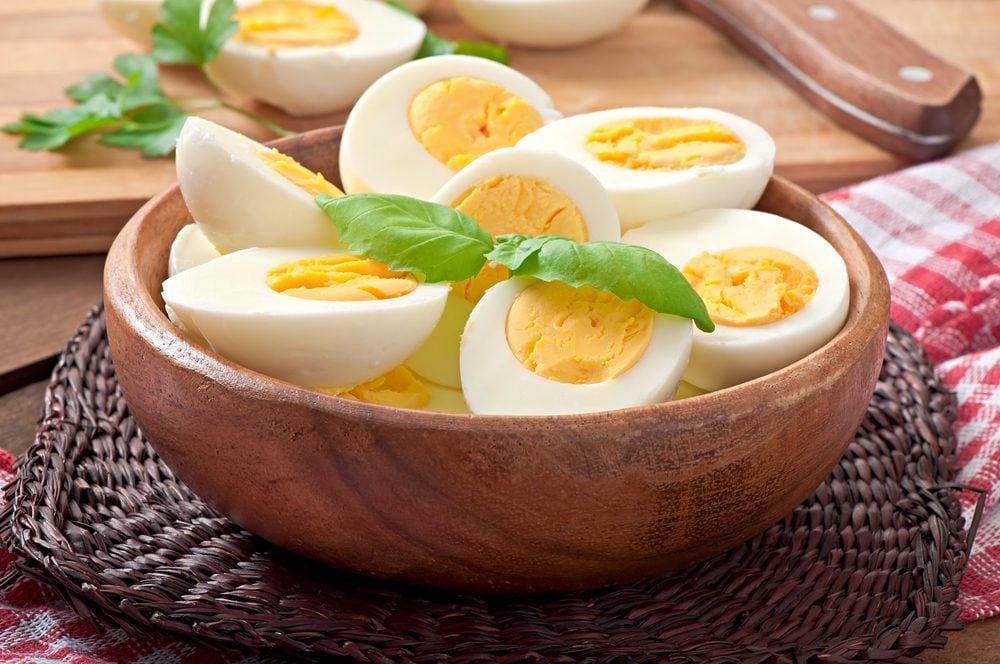 What Happens If You Eat Bad Hard Boiled Eggs

It would be extremely hard to eat bad hard boiled eggs because there is a smell that emanates which makes it incredibly hard for humans to withstand.

If, by chance, you eat an egg that has been left in the danger zone for more than a couple of hours, there could be bacteria that has grown on the egg.

This bacteria could cause you to get food poisoning and get sick. If the bacteria has had enough time to grow, you could need to be hospitalized.

It’s best not to mess around and put your hard boiled eggs in the fridge when it’s time to store them.

Should You Store Hard Boiled Eggs With a Shell or Not?

This answer really depends on how often you eat hard boiled eggs and how convenient you want the experience to be.

Peeled hard boiled eggs won’t last as long as unpeeled ones, so if you don’t plan on eating your eggs within about five days, you could leave the shell on to give yourself a whole week.

Peeled eggs are also a lot easier to eat when you are ready to snack down. You don’t have to go through the whole process of cracking the shell and slowly peeling all the pieces off.

This, of course, means that you have to take the time to peel your hard boiled eggs ahead of time. All the labor is upfront but you get to reap the rewards for the rest of the week.

Unpeeled eggs are going to last a couple more days than peeled ones, so if you make a larger batch it might make more sense to keep them in the shell.

You’ll have to plan your hard boiled egg eating ahead of time since it will take some time to crack the shell and peel it off.

Will Cooking an Egg That Is Rotten Make You Sick?

Don’t even question if an egg is good or not, just save yourself the trouble and throw it out.

Cooking an egg that has collected Salmonella will give you one terrible night, if not worse. The cooking process doesn’t get rid of the bacteria, like boiling water would get rid of bacteria in the water.

You might not notice you’ve eaten a bad egg until hours after ingestion. The process can take a bit to get into your system and process through your stomach.

Once it does happen, you’ll notice straight away because you’ll start getting strong stomach cramps. This will turn into a night on the toilet, so that’s why it’s better to just toss away eggs that might be bad.

Can You Tell If Raw Eggs Are Bad?

There’s a quick and easy way to tell if your raw eggs are bad by putting them in water and seeing if they float or not.

You can even tell how fresh the eggs are by the way they lay in the water.

Get yourself a bowl of lukewarm water that is big enough for your egg to be fully submerged.

Drop your egg in and if it sinks all the way to the bottom, it’s good to go. If it’s really fresh, it will lay right on its side.

If the egg isn’t that fresh, but it’s still good, it will still sink to the bottom except, instead of lying on the side, it will stand on its small part.

Raw eggs that are bad will end up floating in the water. This happens because the egg’s shell is permeable and over time will let oxygen inside.

It will create air pockets that cause the egg to float rather than sink like fresh eggs.

How Do You Boil Eggs So the Shell Comes Off Easily?

There are two major tricks to getting easily peeled hard boiled eggs. One, you need to use boiling hot water to start, and two, you want to shock them in an ice bath.

Most people will dip the eggs in cold water and then bring them to a boil, but it actually makes them easier to peel if you drop them straight in boiling water first.

The other trick is to put your eggs in an ice bath immediately after they are done boiling. This will also make them easier to peel because the eggs will be a lot cooler to the touch.

You can keep your hard boiled eggs for up to 5 days if they’re peeled and a whole week if they aren’t. Just make sure you keep them in the fridge so that they don’t go through the danger zone and cause you to get sick.