There is nothing more fun than learning about new foods, simply because you never know when this knowledge will come in handy. Whether it be for a round of the alphabet game, or for a themed party, some hidden knowledge of foods beginning with a certain letter really can be helpful. 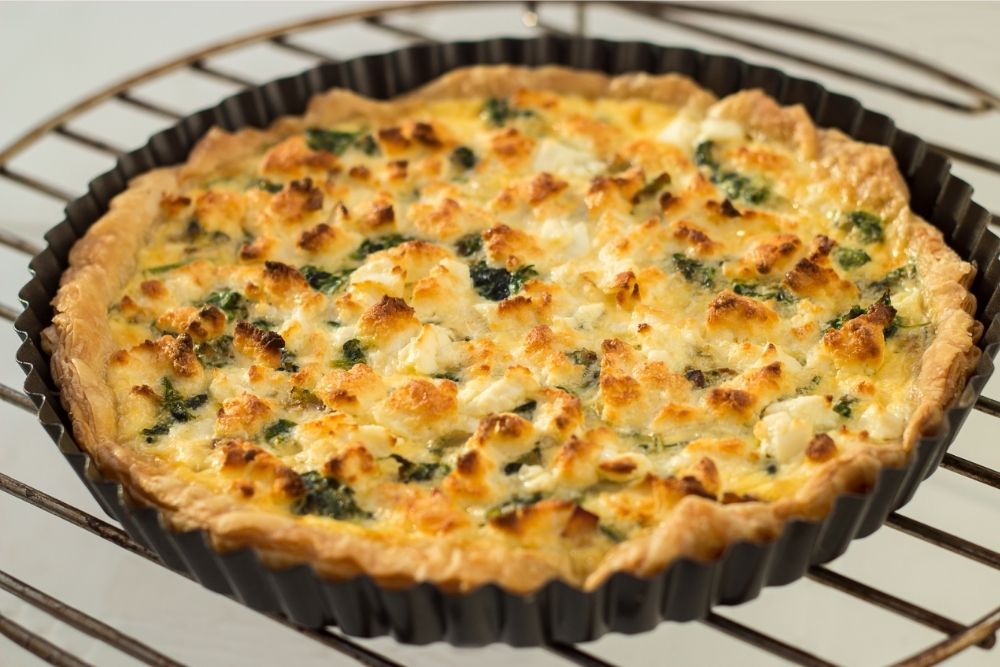 One of the most overlooked letters is ‘Q’. While you can probably recall multiple foods that begin with an ‘A’ or a ‘C’, foods beginning with the letter ‘Q’ are much harder to remember.

After all, Q is a letter that is very rarely used - you only need to look at its score on a scrabble board to realize that.

So, if you want to brush up on your knowledge of ‘Q’ foods for a quiz night, then you’re in the right place. In this guide, we’ve compiled a list of 16 different foods that start with the letter ‘Q’. With no further ado, let’s get started.

16 Foods beginning with the letter ‘Q’ 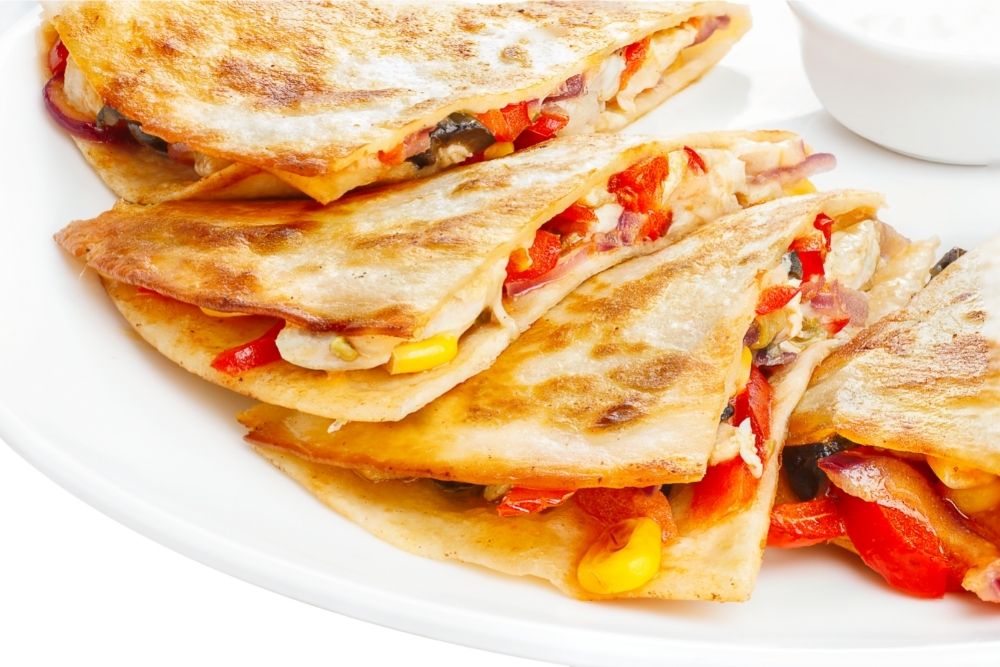 First on the list, we have Quesadillas. This classic Mexican dish has become a firm favorite all over the world, and rightfully so. The quesadilla is made with a tortilla that is packed with meat, spices, and most importantly cheese, before being toasted on a stove or in a griddle.

Since its first creation in the 16th century, the quesadilla has gone through many variations, and you can easily switch up the ingredients to fit your wants and needs. So whether you want mild or spicy quesadillas, the decision is entirely up to you. 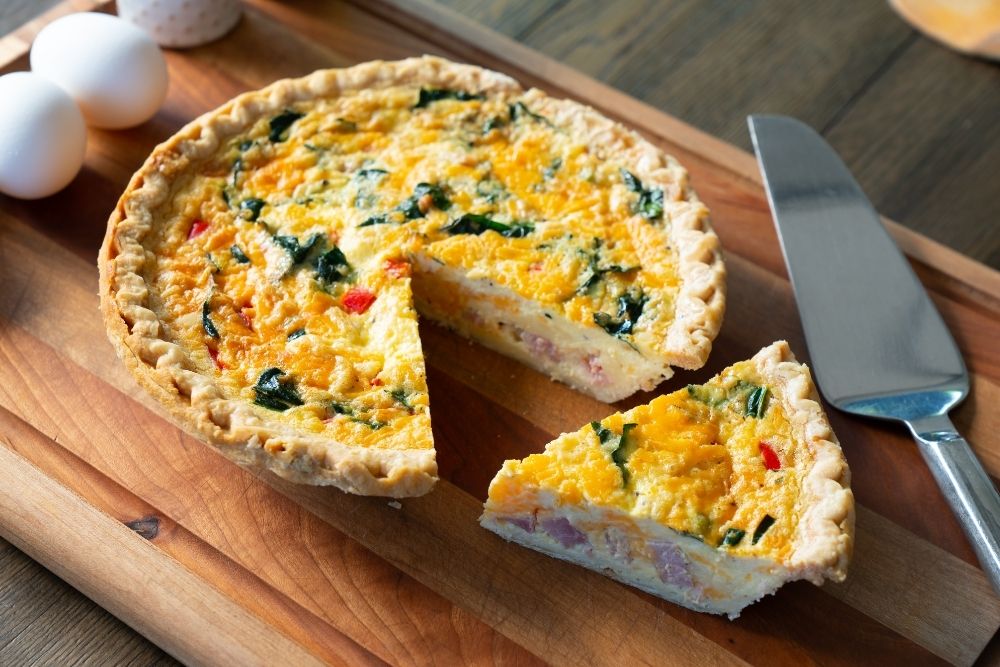 Another favorite meal beginning with the letter ‘Q’ is the Quiché. This French dish isn’t for everyone, in reality you either love it or hate it, but there’s no denying that the Quiché is versatile. A Quiché is made in a tart pastry crust that is filled with savory custard, alongside whatever fillings you want to add. I love Quiché filled with fresh cheese.

The majority of quiches will include cheese alongside a variety of different vegetables, meats, and fishes. If the fillings weren’t enough to make Quiché versatile, they can also be served either hot or cold, making it extremely convenient whenever you fancy it.

That’s the beauty of Quiché, just like quesadillas, you can alter it to suit your taste buds. 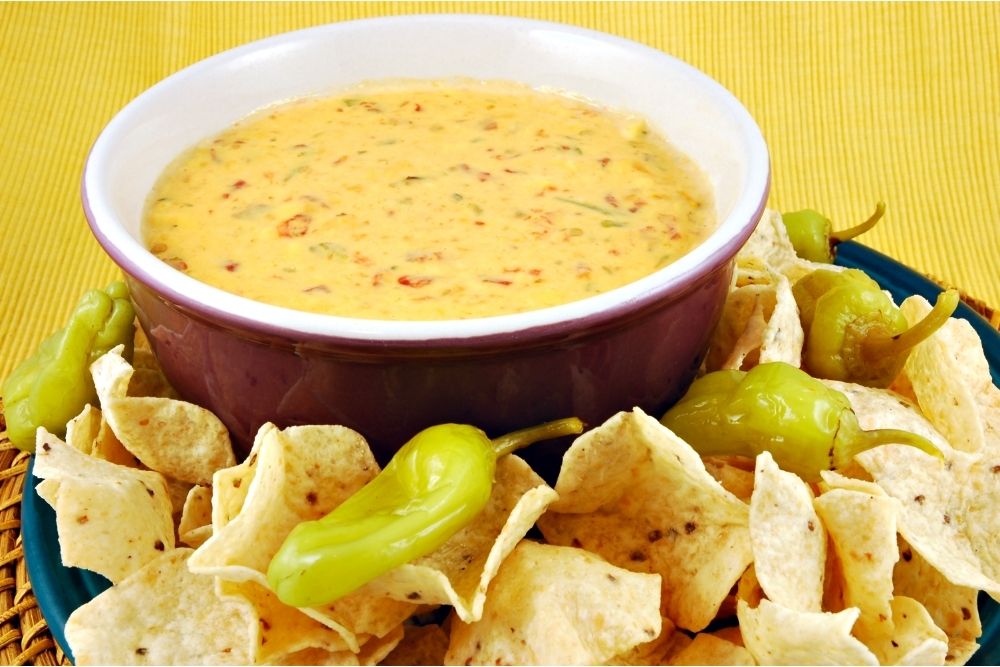 Moving back onto Mexican cuisine, you have Queso. The chances are that you have probably heard of Queso before, but you aren’t entirely sure what it is, that’s unless you are an avid fan of Mexican food.

In which case, Queso is probably up there with your favorites. Queso directly translates to cheese, and it is generally a spicy melted cheese dip. It is perfectly served with nachos and an excellent topping for many other Mexican dishes.  It is a great Mexican cheese made from cow's milk. It's usually a white cheese but can be yellow as well.

It also makes a great dipping sauce for corn tortilla chips, and is a great snack if you fancy something with a bit of a kick. Again, you can generally make Queso as spicy or mild as you want, which is why it is such a great option. 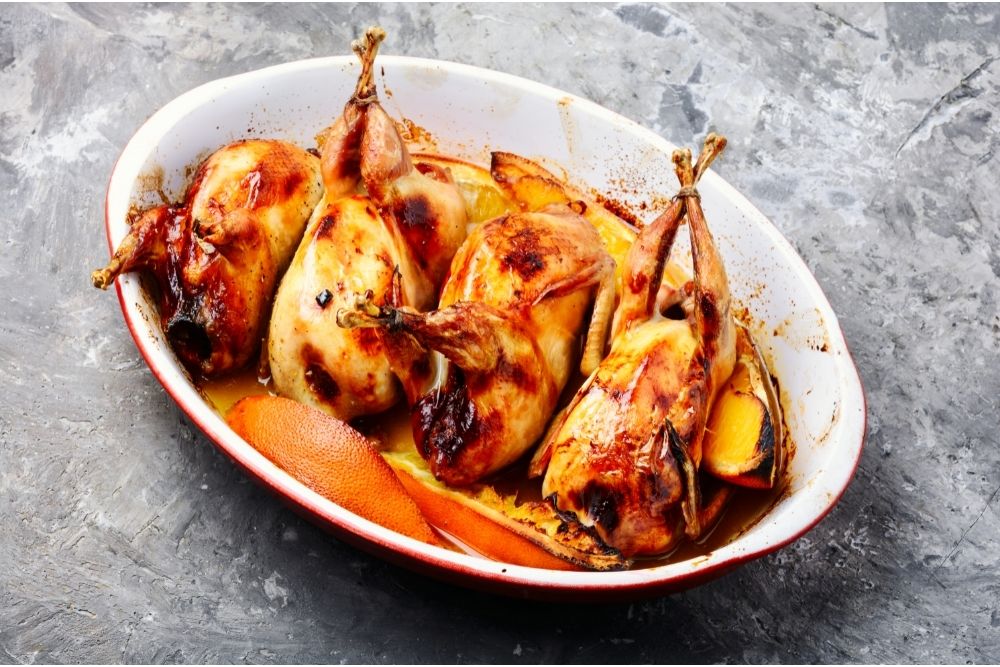 Next up, you have quail. Quail is a type of meat, more specifically, it is a type of bird that is generally considered to be a game bird.

They are often seen as a delicate cuisine, like duck, as their flesh tends to be tender, and their flavor is generally quite strong. This can come as a surprise to a lot of people because quails are very small birds, so you might expect their flavor to be quite bland, like chicken.

However, if you do eat quail, you have to be very careful where you source it from as some species eat a diet that is high in hemlock, which can be poisonous to humans. 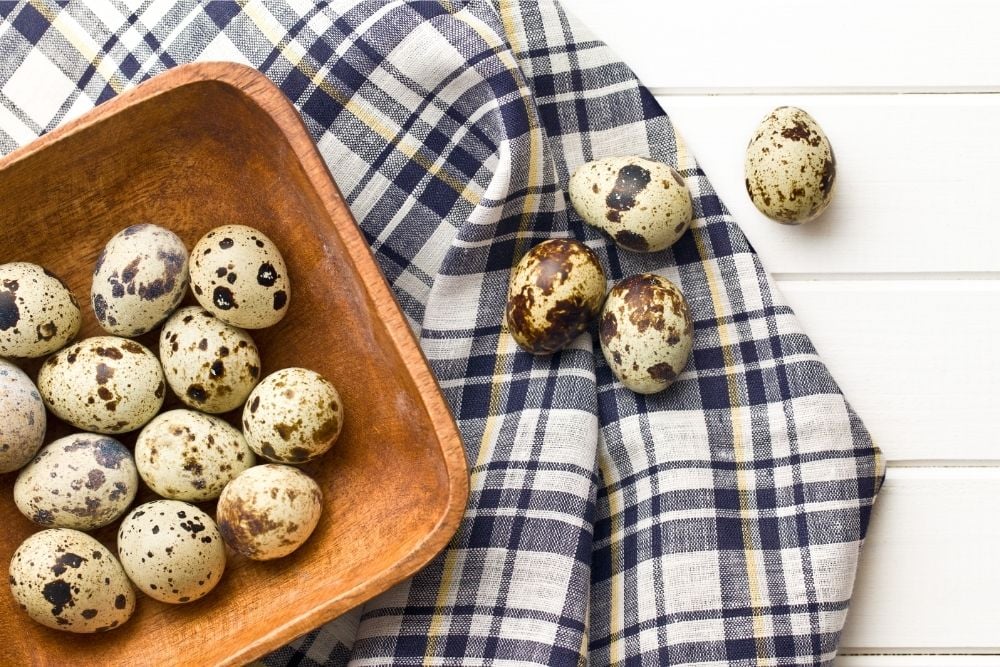 These eggs essentially taste the same as each other, but because of the sheer size difference between the two birds, their eggs also differ in size.

Quail eggs are a lot smaller than chicken eggs, and because of this they are packed with nutrition, making them a popular choice for athletes and those interested in staying healthy. 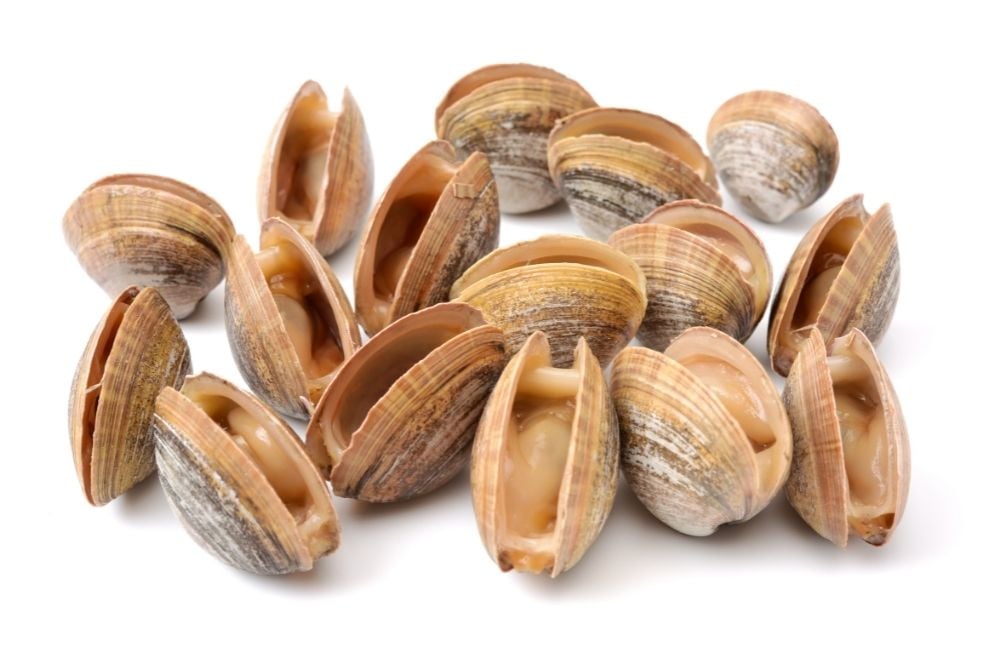 Moving back onto proteins beginning with a ‘Q’, we have Quahog. This is one of the lesser known ‘Q’ foods on this list, but Quahog is basically a type of hard-shelled clam that is found along the East coast of both Central and North America.

There are lots of different species of hard-shelled clams, and Quahogs are one of the best known due to their large size. This large size means that they are better suited for chowder dishes, rather than eaten in their natural form, but either way they are enjoyable.

Again, just like with quails, it is important that you source your Quahog carefully as they are often affected by ‘red tide’ a condition that is picked up in some areas, and can be dangerous for humans. 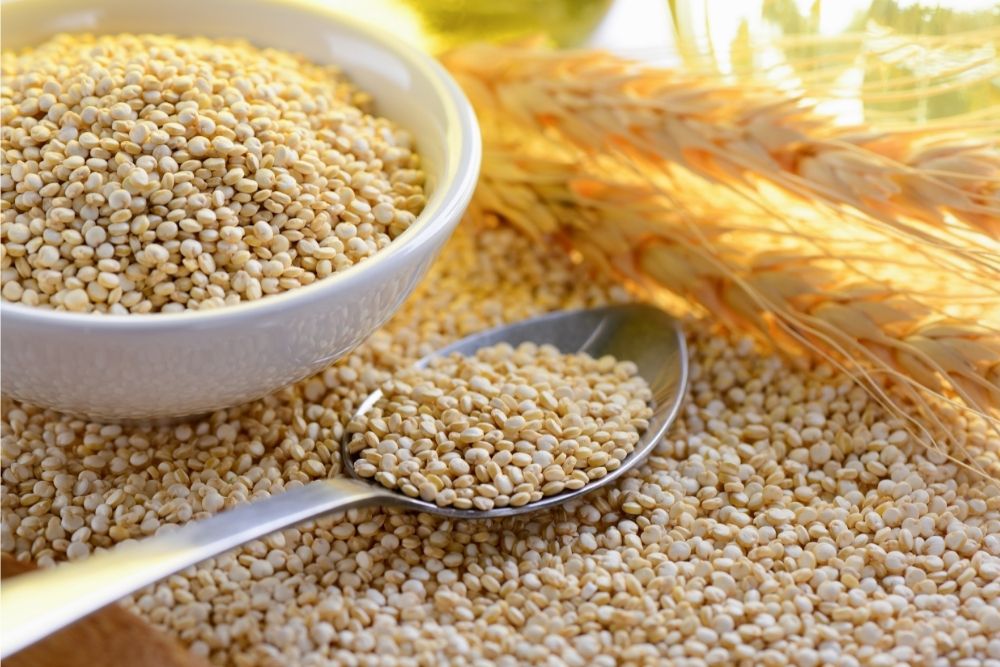 Now that we’ve covered all the protein dishes, let’s take a look at some of the many side dishes that begin with ‘Q’. Starting with Quinoa. Despite its strange name, quinoa is something that you have probably already heard of. Especially if you are someone who is interested in eating healthily.

Quinoa is a type of seed, but it is commonly prepared and eaten as if it were a grain, like rice. It is naturally gluten-free, and very high in protein, which is why it is very popular among athletes. It is fluffy, nutty, and highly versatile. So whether you serve it hot or cold, quinoa is going to be a yummy addition to your plate. 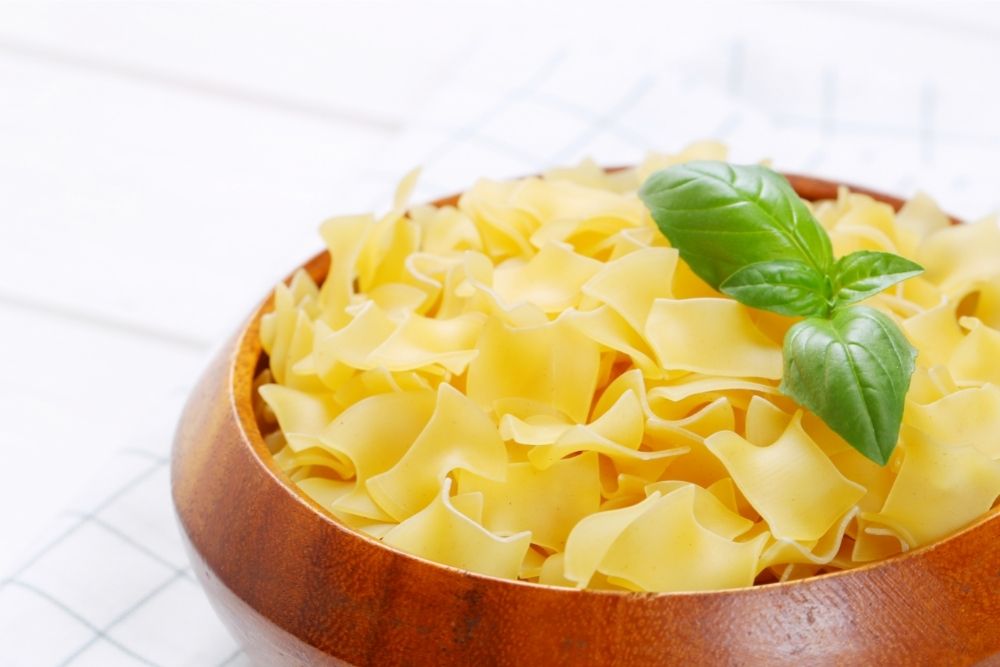 Another great side dish for your meal is pasta, and if you want one that begins with ‘Q’, then Quadretti pasta is perfect for you. If you have any interest in Italian food, then you will know that the list of pasta shapes is seemingly endless.

But, one of the most basic shapes that you can get is Quadretti. Due to this, this style of pasta is very popular among those who choose to make homemade pasta as it is easier to get right than some other shapes.

As well as serving as a side dish, some people also choose to add Quadretti to broth soups due to its small size. So, once again, this is a highly versatile ‘Q’ food.

Up until now, we’ve mainly looked at ‘Q’ foods that could be meals on their own, but these options are limited. What you will find with the letter ‘Q’ is that most of the foods beginning with this letter are either fruit or vegetables. Starting with the Qeqorani.

This type of vegetable is actually a very small potato. However, they are a lot more bumpy and lumpy than some other types. But, this isn’t the only thing that makes the Qeqorani stand out from the rest.

In fact, the color of this potato is what makes it so unique, as it is a mixture of tan and purple on the outside, and when you cut it open you will find a marbled cream and purple color inside.

Staying in the vegetable category, next we have the Quassia. This isn’t technically a vegetable, instead it is a leaf that is mainly used for medicinal purposes. However, it is also sometimes used for flavoring food. Generally, this leaf is mainly used for digestive issues, encouraging appetite, and even treating worms.

It is very bitter on its own, but it is often used in a variety of different soft and alcoholic beverages to balance flavor. However, it should never be consumed on its own (or in large amounts) as it is a natural laxative. 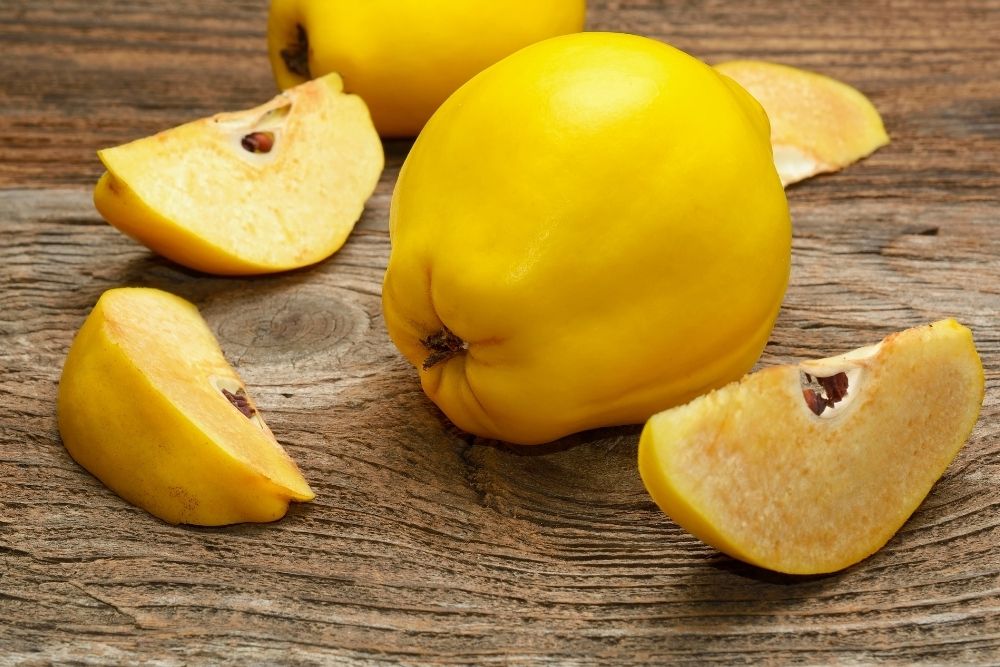 Moving onto fruit, let’s begin with Quince. Due to the fact that this rhymes with the word ‘mince’, you might expect it to be meat. But, quince is actually a type of fruit that is bright yellow in color, and available in lots of different shapes.

Quince is one of many fruits that cannot be eaten raw, instead you must bake it with sugar if you want to enjoy this fruit. This is why it is most commonly used in pies, tarts, and other sweet desserts. 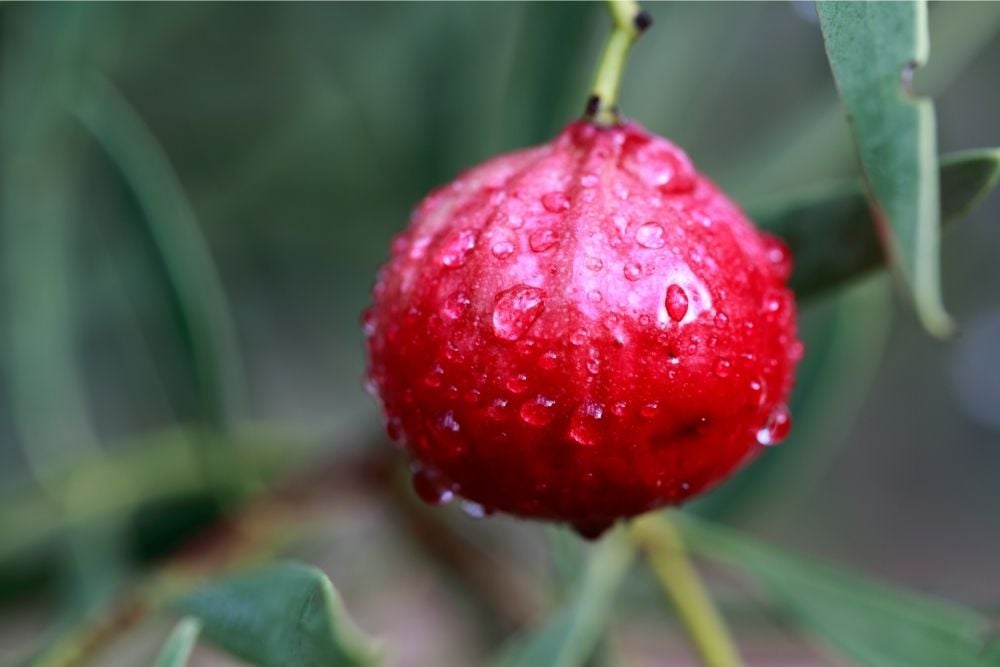 Despite its strange name, the Quandong is a fruit that hails from Australia. They are very similar in appearance to cherries as they are both red and a similar size, but Quandong is less of a Summer fruit.

In fact, you will most commonly find Quandong being used in the festive season, usually baked to make sweet and tangy Quandong pies. This fruit is designed to survive warm and dry temperatures, which is why it thrives in Australia.

Just like many other ‘Q’ foods, the Quandong is also highly versatile, and can be enjoyed raw, dried, stewed, and even cooked.

This type of pineapple looks just like any other, but it is most commonly found in Tahiti, and the island of Moorea. In fact, it is one of their most harvested fruits. While they look just like any other fruit, Queen Tahiti Pineapples are a lot stronger in both taste and smell, which is why they are so good for juicing.

In these islands, the juice of these pineapples is then often used to create wine that has a unique taste. 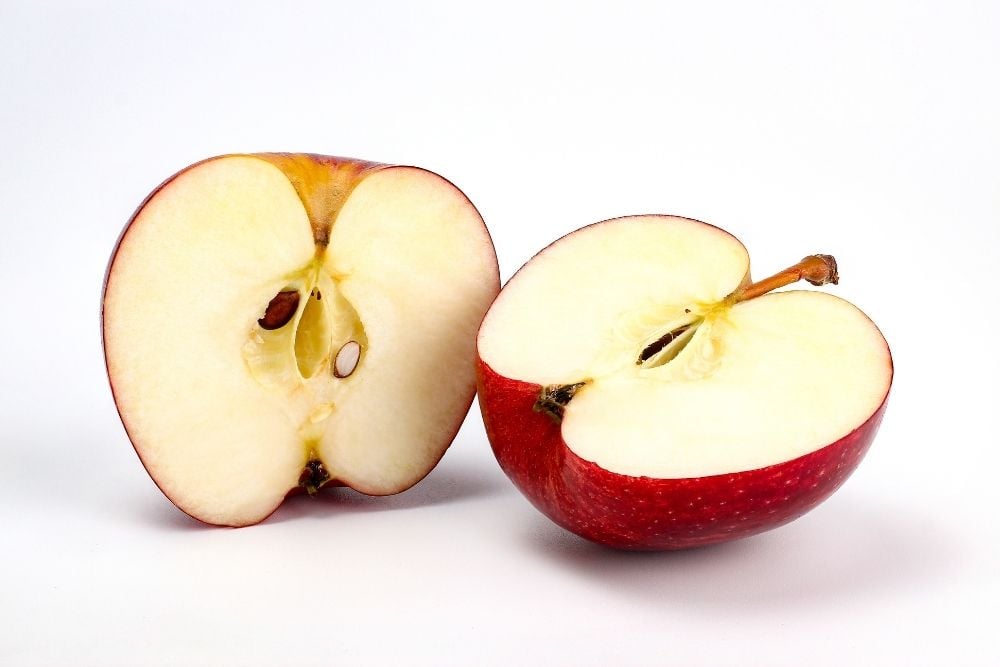 Similarly, next on this list we have the Queen Apple, another healthy food. This type of apple comes from New Zealand, and is very crisp and juicy.

You probably will have heard of Gala and Splendor apples before, well the Queen apple is a mixture of these two. Due to this, they have a sweet flavor with subtle undertones that may make you think of a pear or a banana. This makes them great for dessert with ice cream.

In the USA, you may not have heard of this type of apple before, this is mainly because they are most popular in the Asian market. The primary reason behind this is the fact that these apples can only be grown in New Zealand, which makes transporting them difficult. 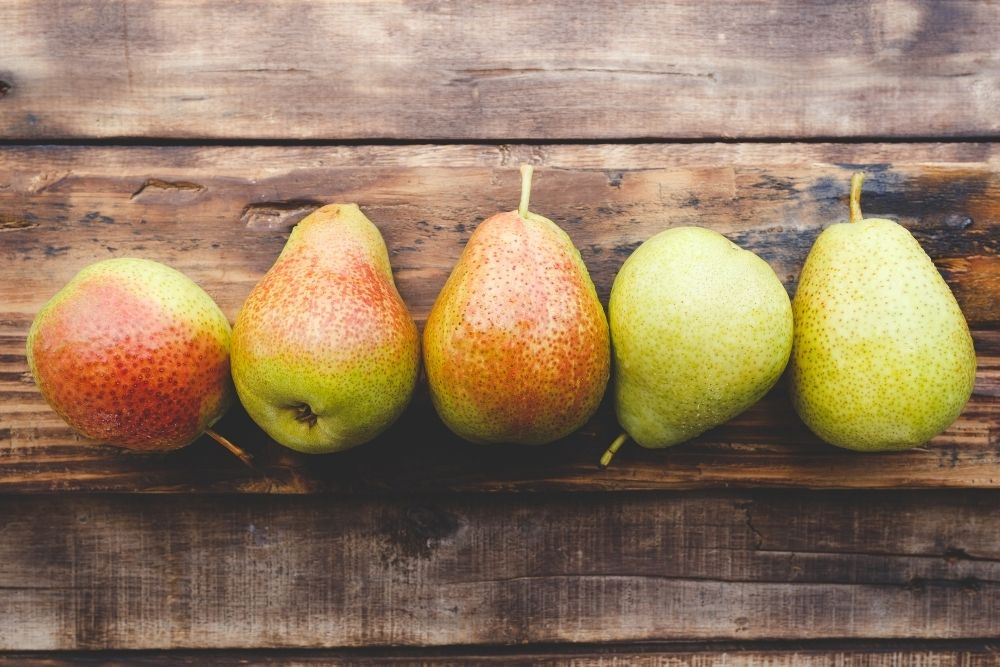 Finally, we have the Queen Forelle Pear. A fruit that is often shortened to simply be known as ‘Forelles’. These pears come in a standard pear shape, but they are considerably smaller than most pears.

Due to this, their taste is a little more sour, which is why they are better suited as an addition to a salad, than as a sweet snack. They are bright yellow with red specks, and very juicy. But, they do not taste like most pears.

In short, there you have it. A complete guide to 15 different foods that begin with the letter ‘Q’. From ready-made meals, to protein, to fruit and vegetables, we’ve covered everything. So next time someone asks you for a food beginning with ‘Q’, you will be well-prepared for your next recipe.

We left off Quorn as it's a meat substitute primarily available in Europe. 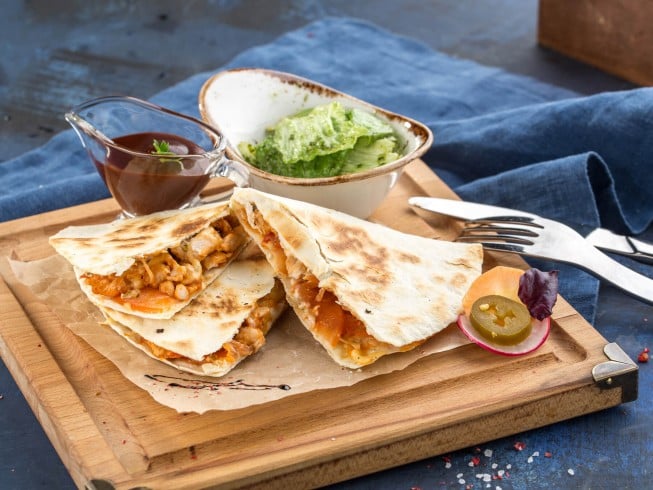 Foods That Start With Q: 16 of Our Top Choices