Skip to content
Sour Patch candies are pretty much everyone’s favorite childhood candy. But, trying to work out which food is vegan and which isn’t is difficult when it comes to gummy candy.

A lot of gummy candies contain gelatin which is definitely not vegan. But quite a few gummy candies are actually vegan, even just by accident.

When you first begin a vegan diet, it seems as though every food that isn’t a vegetable contains a non-vegan ingredient. Those few words saying “1% milk powder” will cause you so much frustration that you wonder if you will be able to eat anything other than broccoli again.

But, the good news is that you don’t have to trek to some obscure health food store to find some candy. (Although we do recommend going to a local independent vegan food store if you can, they always have the best stuff.)

So, what about everyone’s favorite candies? Here’s our guide to vegan-friendly Sour Patch snacks.

But they are getting fewer by the day and soon it will be difficult to find candy that isn’t vegan. But, until then, Sour Patch candies are a great choice. 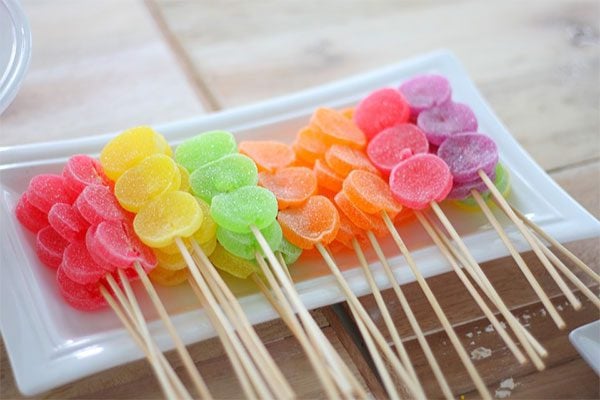 First up, the classics. Are Sour Patch Kids vegan? Surprisingly they are! Although Sour Patch Kids are gummy candies, they are actually certified as vegan-friendly by PETA. Here are the ingredients for classic Sour Patch Kids, just so you can be sure.

As you can see from these ingredients, Sour Patch Kids aren’t the healthiest of snacks. But, they are a delicious vegan treat. So you’re safe to add Sour Patch Kids to your list of safe sugary treats.

While we don’t recommend you include them as part of your everyday diet, you can definitely have this delicious combination of sugar and artificial food coloring whenever you need a pick-me-up.

One of the sneakiest of non-vegan ingredients is the red food coloring Carmine. This is also sometimes called “natural red 4”. This is different from the red 40 listed in the ingredients above which is vegan.

Sour Patch Watermelon might be a little different but they are still pretty similar to the original Sour Patch Kids. Here are the ingredients:

As you can see from the ingredients above, Sour Patch Watermelon are also vegan! This is another great gummy candy that vegans can enjoy. As with Sour Patch Kids, “red 40” is not the same as “natural red 4”. So the food coloring in this candy is also vegan.

Sour Punch Straws might not be as popular as Sour Patch Kids. But they are still a delicious sugary snack. And, are they vegan?

As you can see from the ingredients above, Sour Punch Straws are another surprisingly vegan candy. Although we wouldn’t recommend you eat them every day, they are another great product to add to your (sadly pretty short) list of vegan candies and snacks.

Ingredients to Look Out For

So, it’s always a good idea to have a quick search of the ingredients list to make sure a food is vegan. Alternatively, you can simply ask a search engine if a food is vegan and there will likely be a lot of answers available (which is probably how you found this article).

That said, there are still some ingredients that are even up for debate within the vegan community. These include ingredients such as sugar, palm oil, and alcohol. This is often due to the production process.

For example, some sugars and alcohols aren’t vegan due to the way they are strained and refined. Some alcohol (especially wine) is strained through isinglass. This is a nicer name for a kind of gelatin made from the bladder of fish.

Some sugars are strained through animal bone. This might all seem very unnecessary (and it is) but there are some foods that have been made a certain way for centuries, if not longer, and the production process has yet to be updated.

Another controversial ingredient is palm oil. Palm oil doesn’t come directly from an animal but its farming does cause mass deforestation.

This is causing destruction not only to the environment and important forests that are necessary for our own survival, but also the survival of many other animals, and the planet as a whole.

Overall, it seems that Sour Patch candies are a great accidentally vegan treat! This is pretty surprising as a lot of gummy candy isn’t even vegetarian, due to the gelatin content. So it’s super exciting to come across candy that is free from all animal products and can be enjoyed by everyone.

More and more manufacturers are making sure that their products are vegan-friendly. This is a great ethical move but also ensures brands retain their customers as more people switch to vegan diets.

But, although this is great and exciting, you should still always check the ingredients or look up the product. Some candy, especially products that have been around for a long time, have some often surprising animal products.