Do you love buttery, flaky, delicious dumplings in your chicken and dumplings, soups, and stews but lack the time to make dumplings from scratch? If this is you, then you’re in for a pleasant surprise!

Bisquick was invented by a man named Carl Smith in 1930. Smith was a General Mills sales executive and he loved eating biscuits when he rode the train to San Francisco. When he asked the cook how they were prepared, the cook told him that he used a pre-mixed blend of baking powder, salt, flour, and lard.

Smith got the idea that such a product would sell well on the market, so he pitched the idea to his bosses at General Mills. They decided to create a product that was shelf-stable and didn’t require refrigeration, unlike the train cook’s recipe.

You and your family can enjoy all of the goodness of homemade dumplings with this Bisquick dumpling recipe.

You’re probably familiar with Bisquick, but if you’re not, Bisquick is a wonderfully versatile pre-mixed baking mix that contains flour, salt, shortening, and baking powder. 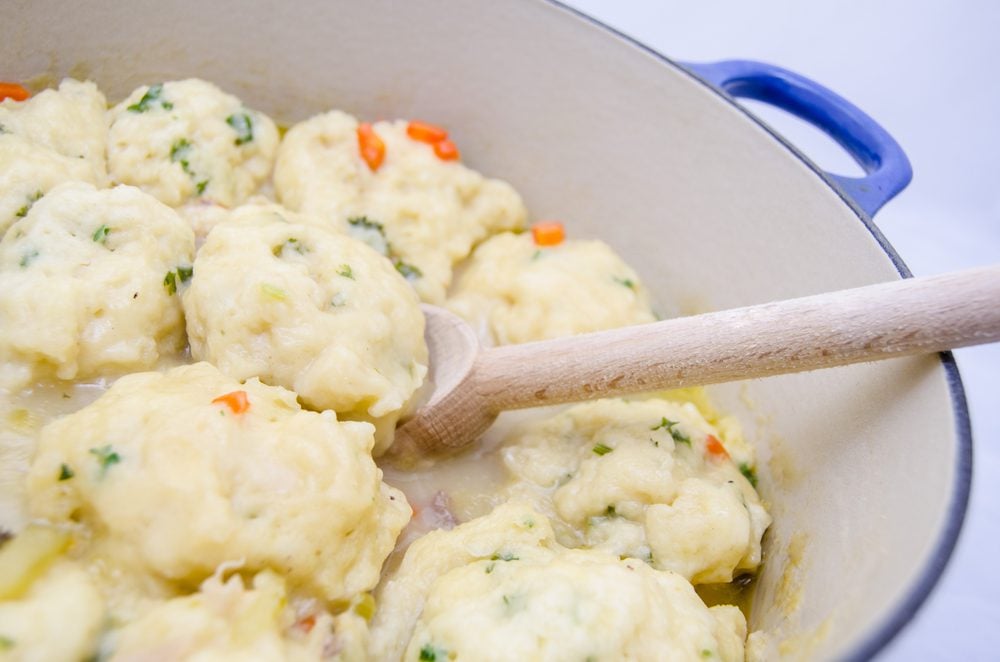 This handy pre-made baking mix can be used to make tons of different treats, including pancakes, biscuits, pie crusts, waffles, and yes, an easy dumpling recipe that go great with your favorite chicken stew recipe, beef stew recipe, and more.

When using Bisquick, you can eliminate much of the guesswork that’s involved with gathering together and mixing your own dry ingredients.

When you use Bisquick to make chicken and dumplings, you will have pillowy and buttery dumplings that are ready to go in minutes.

How easy is the Bisquick dumpling recipe? Well, you only need two ingredients for this homemade dumpling recipe. It doesn’t get much easier than that.

Let’s dive in and learn how to make delicious homemade dumplings. 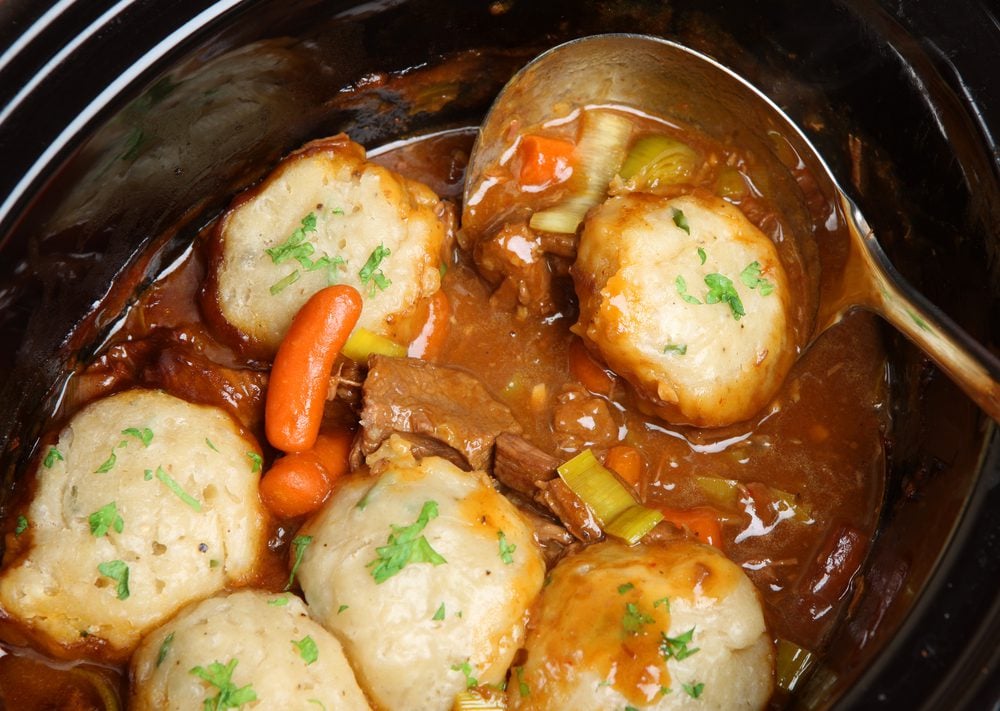 How to Make Dumplings with Bisquick

Apparently, Bisquick has removed their dumplings recipe from the box. Fortunately, this wonderful dumpling recipe lives on because of the internet and we’ve got everything you need below. A lot of cooks swear by using canned biscuits or biscuit dough to make their chicken and dumplings recipe, but these Bisquick dumplings taste just like homemade dumplings.

However, one thing that’s amazing about making homemade dumplings using Bisquick is that you can add to your Dutch oven whatever ingredients you want. This includes cheeses, spices, herbs, and any other optional flavorings and ingredients.

One way to make these Bisquick dumplings even more amazing is by adding herbs like parsley, rosemary, thyme, cayenne pepper, smoked paprika, and more.

As for cheeses, you can add in shredded cheddar cheese or grated Parmesan cheese to make wonderfully cheesy dumplings. 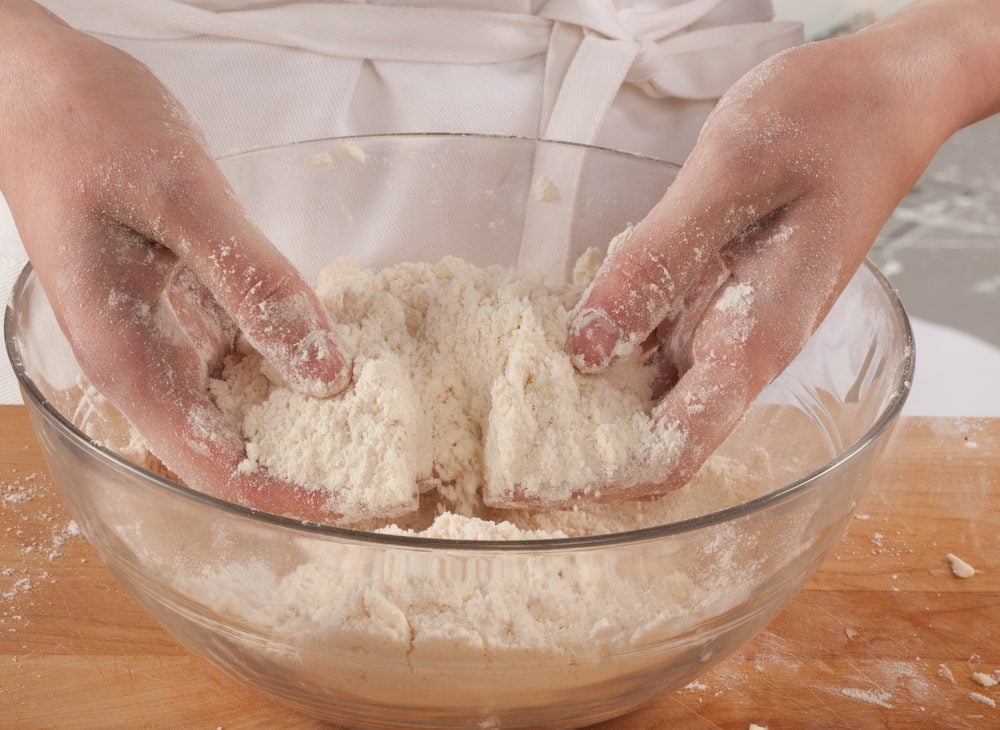 Once you have gathered all of your ingredients together, follow these steps to make your dumplings.

Note: if the stew in your Dutch oven gets thicker than you want it to be, simply add more of whatever liquid you’re using to cook with. This may be water, chicken broth, chicken stock, beef broth, vegetable broth, or others. 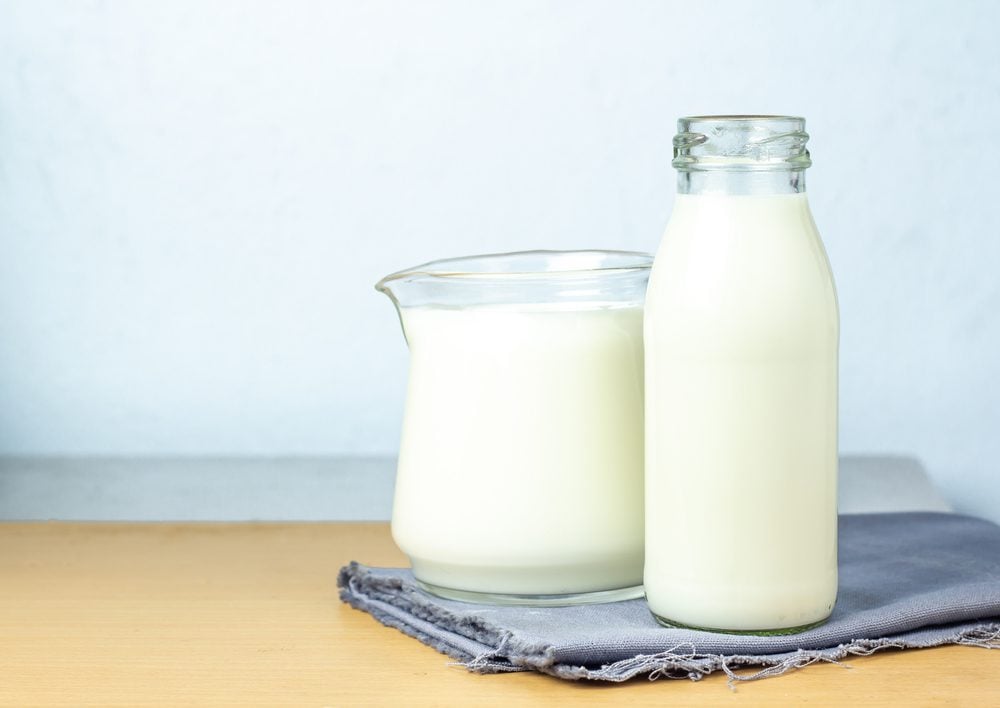 Many home chefs are curious about whether or not they can use something else instead of milk to make Bisquick dumplings. The answer to that question is a resounding yes.

For some people, cooking with milk is problematic. For example, if someone in your household has a milk allergy or intolerance. Also, for cooking vegan recipes, it can be helpful to have other options, too.

If you use water instead of milk to make your dumplings, they will not be as flavorful or fluffy. Also, they will be somewhat drier than dumplings made with milk. However, the difference isn’t that drastic, so if you want to use water, go for it. Your dumplings will soak up the flavor of your chicken, stew, or soup.

What Other Liquids Can You Use to Make Bisquick Dumplings?

Here’s something else that is great news. You can use other alternative liquids to make your dumplings, too. For example, coconut milk, almond milk, soy milk, and rice milk all make wonderful milk substitutes.

When cooking any recipe, there are some best practices you can follow to ensure greater success. This includes chicken and dumplings. To make the best Bisquick dumplings, follow the tips and tricks below. 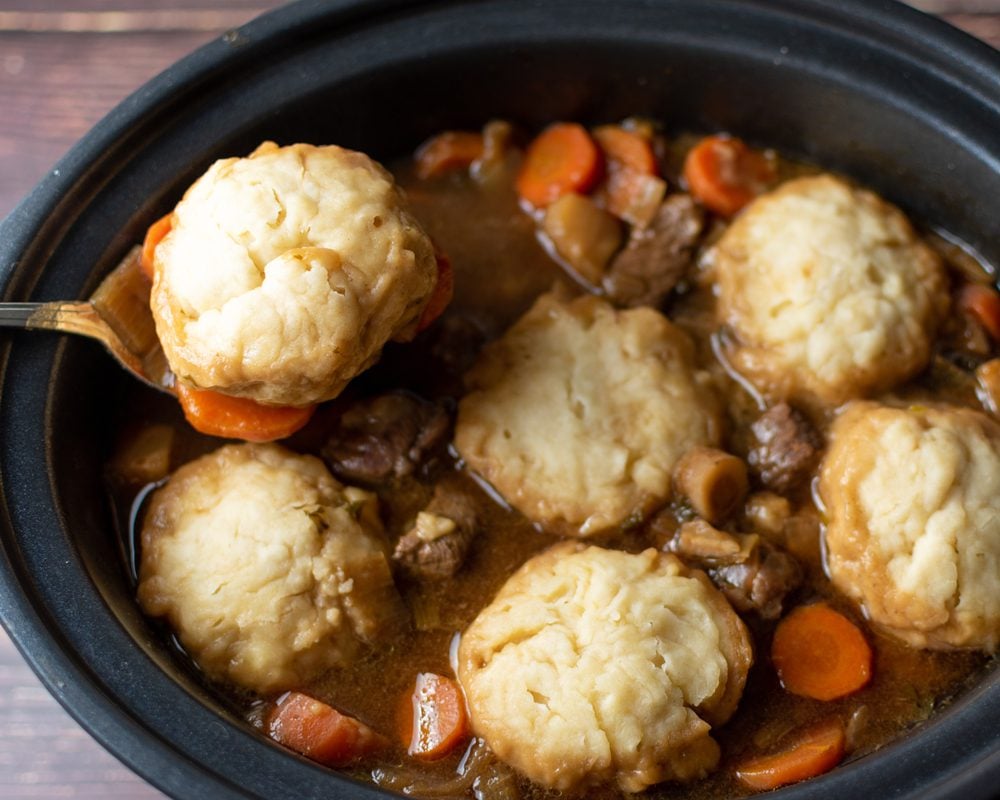 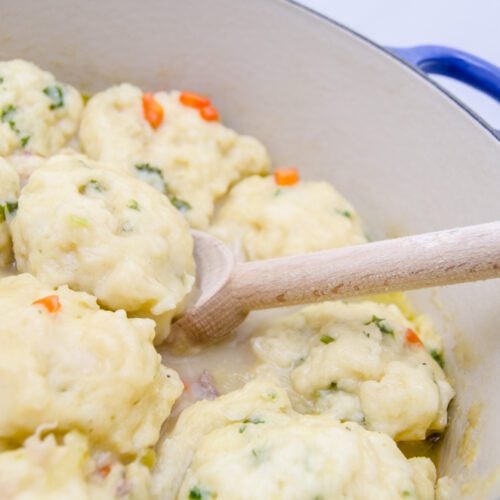 Calories: 53kcal
Keyword Bisquick dumplings recipe
Tried this recipe?Let us know how it was!

If you’re concerned about the tops of your dumplings getting cooked, you can spoon some hot liquid from the pot over the dumplings. However, don’t stir the pot.

Note: if your boiling stew gets thicker than you want it to be, simply add more of whatever liquid you’re using to cook with. This may be water, chicken broth, chicken stock, beef broth, vegetable broth, or others.

Watch the video below to get some great tips on how to make Bisquick dumplings that don’t fall apart.