Are you planning on making a delicious roast or stew? Maybe you’re looking to mix things up in the kitchen and want to experiment a bit more.

If so, you will probably come across beef broth in some ingredients.

Homemade Beef stock, also known as beef stock or bone broth, is a liquid made out of boiled ox bones or beef bone, celery, carrots, onions, herbs, and vinegar.

It has a very rich taste which is perfect for different soups, curries, and stews. 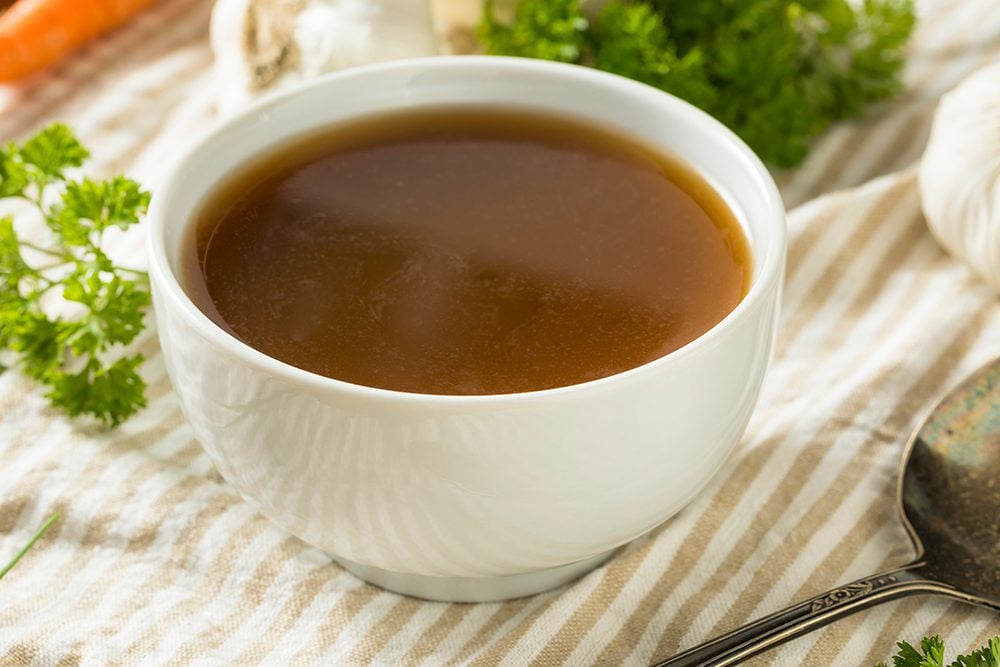 Many kitchens will already have beef bone broth as it is a regular ingredient in a myriad of meals.

If you have searched high and low, through all your cupboards and there is still no sign of beef broth, you’re probably wanting to see if anything else you have can act as its substitute.

Luckily, there are a number of delectable substitutes for beef broth which can be just as tasty. Beef broth gives flavor and substance to many dishes so it is imperative its alternative can live up to these standards.

We are going to look at 6 delicious substitutes for homemade beef broth below and save your cooking day!

Like many ingredients over time, you may have run out of beef broth.

The following substitutions can fill the shoes of broth in a range of dishes so let’s see what the best alternatives are! 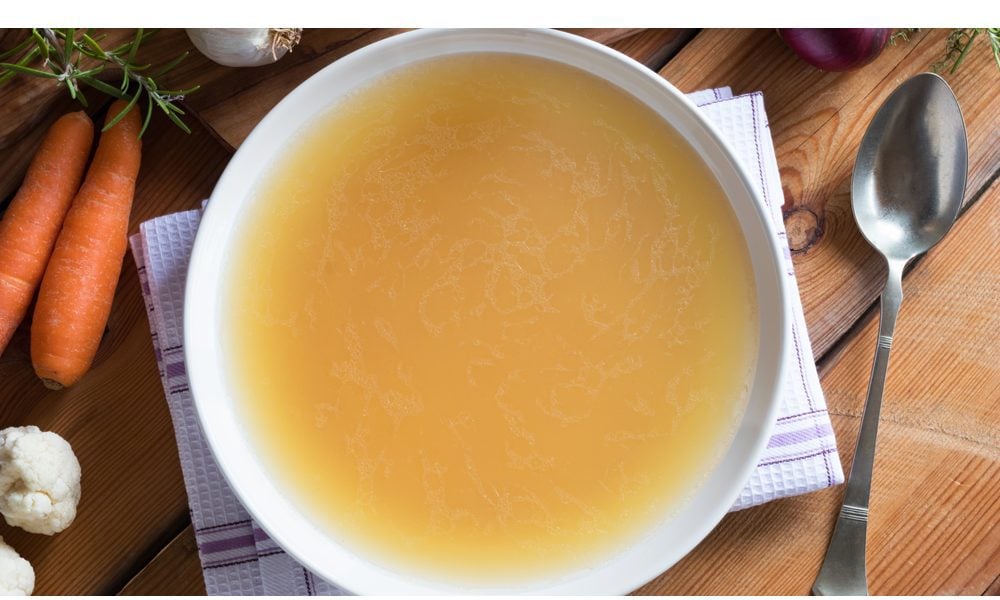 If you are making a stew, soup, or creamy sauce, chicken broth could be an ideal choice. Just like beef broth, chicken broth is also made of meat, therefore acting as a perfect meaty substitute.

This is made by cooking chicken and bones together in water and sometimes mixed with vegetables for added nutrients and taste. The remaining liquid leftover is then used as broth.

Chicken broth is typically used as a base for soups, white sauces, and an additive to various pasta dishes.

It should be available in any grocery store around the country and it is normally boxed for convenient transport home and in the kitchen.

To replace beef broth with chicken broth, just use equal parts of the chicken broth. You may find the color will be a little lighter for the end result. 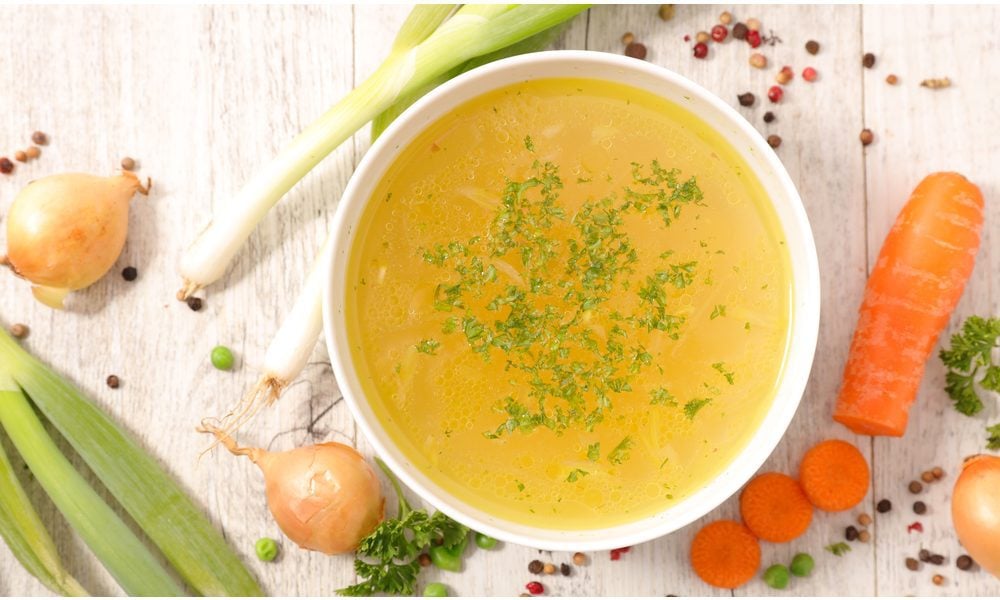 Here’s one for the vegetarians! Vegetable broth is often used instead of beef broth as it adds extra flavors and is wonderfully versatile for most meals.

You can add numerous vegetables to this broth such as carrots, garlic, mushrooms, and onions. It doesn’t stop at vegetables!

You can also add an array of seasonings like thyme, rosemary, bay leaves, and pepper for added tastes.

In order to make vegetable broth, you simply prepare it in the same way as meat broth but obviously without the meat. It can be used in a mixture of recipes too, especially in sauces, soups, and casserole dishes.

Simply replace the beef broth with equal parts of vegetable broth for a tasty substitute. However, you may need to add some extra seasoning for your desired taste. 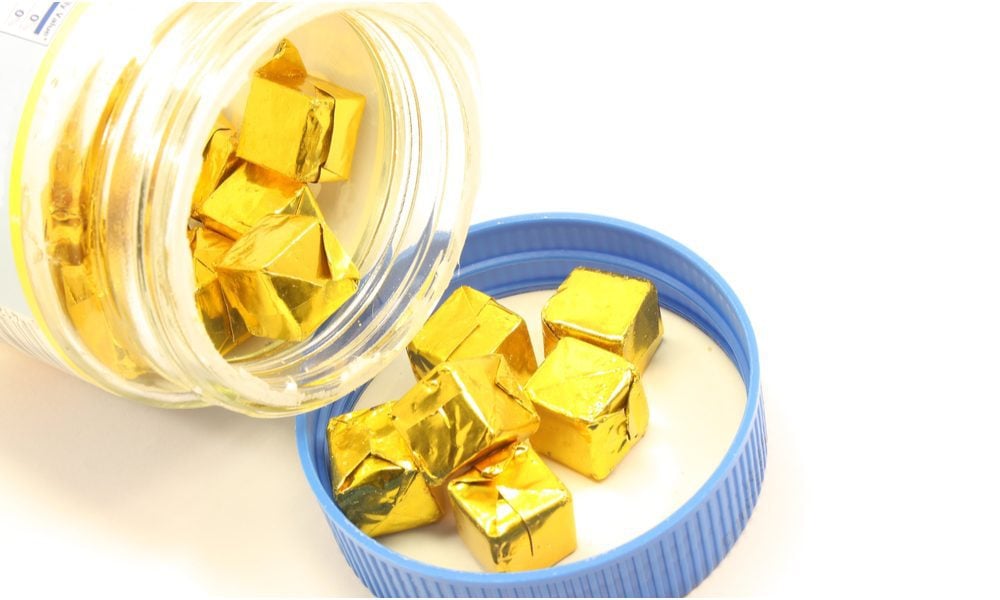 A bouillon cube is also known as a stock cube or a broth cube.  Most of these cubes are not suitable for vegetarians as they are made with meat stock, fat, vegetables, salt, and some seasoning.

On the other hand, there are some vegetarian options available.

The dehydrated bouillon is formed into a small cube for convenient cooking and is frequently used in various sauces, stews, soups, casseroles, and gravies.

You should find these around the seasoning aisle of your grocery store but organic supermarkets may have more variety to choose from.

It is easy to prepare. Simply boil 1 cup of water and place 1 cube inside to dissolve completely. When these have combined, you are then able to replace 1 cup of beef broth. 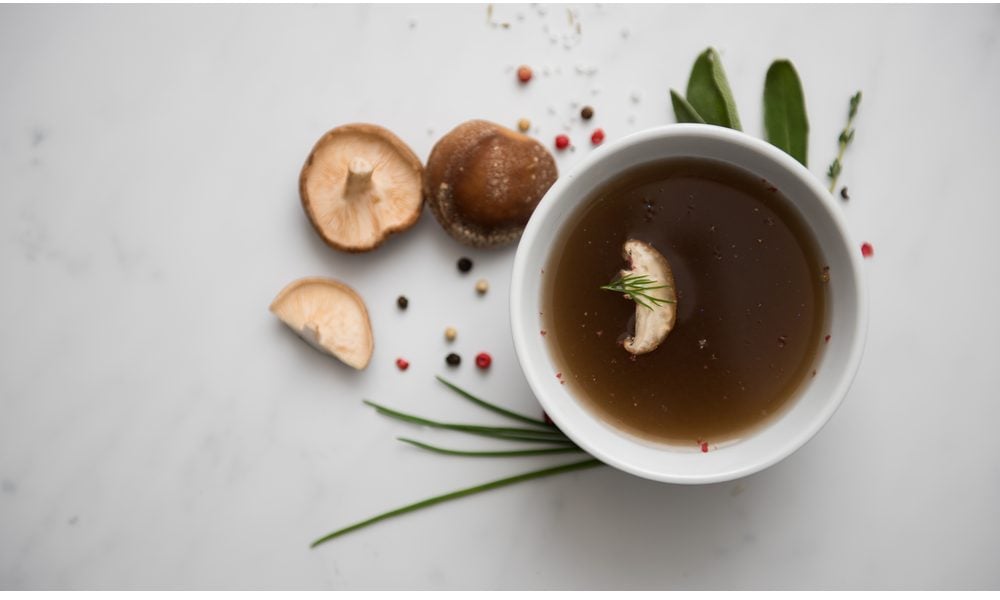 If you’re looking for another easy alternative, try mushroom broth.

You will need a yellow onion to fry quickly, a carrot, some dried or fresh assorted mushrooms, parsley sprigs, a bay leaf, thyme, 2 or 3 peppercorns, a little salt, and water to bring it to a boil.

You should see the broth begin to reduce in size as it is left to simmer.

It is possible to change the assorted mushrooms with button mushrooms. It’s your broth after all! The broth will be ready when the veggies are soft and you taste a distinct mushroom flavor.

Nonetheless, be prepared to wait an hour or so for the best results.

If you feel like spicing things up a bit with your broth, you can add a dash of red wine, soy sauce, or even some miso paste to the vegetables while sauteing them. This will enhance the taste measurably.

As we mentioned red wine, let’s look at our next option! Believe it or not, wine or beer are excellent substitutes for beef broth. They add flavor, texture, and richer colors to enhance your dish.

You may already find that your recipes include wine or beer such as some gravies, sauces, or stews. If you’re not one for alcohol, there are non-alcoholic beer choices too.

As you probably know, wine and beer are sold in all grocery stores. If you can’t find what you’re looking for, consider trying a liquor store.

It doesn’t have to be one or the other either! You can mix beer and wine for a unique tasting experience. If you decide to try this, make sure the levels in your recipe are adjusted accordingly.

Here is another vegetarian choice that is a great alternative for beef broth. Just like soy sauce, this can provide umami (savory) flavors to your dish.

It can be added to your vegetable or mushroom broth as you cook for the best tasting results.

Liquid aminos are typically used in stews, sauces, and casseroles. They have many health benefits because of the high levels of amino acids inside.

Liquid aminos can be a bit tougher to come across, though. It is recommended you look in the seasoning aisle of the grocery store or a local organic supermarket.

We mentioned soy sauce as an additive to the mushroom broth. It may seem crazy but soy sauce adds color and flavors.

It can be added to other vegetable broths too for added flavors. This should give the broth a closer taste to beef broth.

Asian cuisine uses soy sauce in great amounts so if you are planning on making an Asian dish, you can replace the beef broth by using 1 cup of soy sauce and 1 cup of vegetable broth.

The best thing about soy sauce is how readily available it is. You will find it in your grocery store and convenience store.

If you’re feeling wild, try adding steak or Worcestershire sauce to the sauce instead. Just make sure it is measured correctly and in detail to not overpower the dish’s flavors.

There are many health benefits of various broths. Beef broth has highly nutritious values containing iron, amino acids, and calcium.

These all work together to boost your bone health, your immune system, and keep your intestines healthy.

Vegetable broth is just as nutritious, if not more. It provides a good source of fibers, eases your digestion, helps with weight loss, and strengthens your bones and skin to name just a few benefits. I'm a big fan of homemade broth or homemade beef broth made with a soup bone or soup bones in a roasting pan or slow cooker. Marrow bones work best. Roasted bones or meaty bones also work. Really any beef soup bones should work.

Can I use water in place of beef broth?

Yes, you can use water in place of beef broth in a recipe but you might want to add in some butter or oil at the same time to mimic the fatty contents of beef broth.

If you’re cooking beef and your recipe calls for beef broth but you use water instead then you’ll barely notice a difference as the beef will give the dish a meaty flavoring on its own.

If you have a beef bouillon cube in your cupboard then you could use one of these mixed with 1 cup of boiling water until the cube has dissolved to make a beefy liquid.

You could always try to make homemade beef broth from the beef you are cooking, by cooking off the beef bones or scraps on the stove in water and add in some carrots, celery, onions, garlic, bay leaves, and peppercorns to give the beef stock a more pungent taste.

Can you use chicken broth instead of beef broth?

Yes, many people do choose to use chicken broth instead of beef broth in a recipe, although it will produce slightly different flavors to what beef broth would.

You could even try using chicken bouillon cubes in boiling water as they’ll still give your recipe a savory and meaty flavor.

However, there may be some dishes where the beef is cooking in broth for hours to make it moist, so cooking beef in chicken broth may be a bad idea as it may hinder the taste of the beef and won’t have that rich beef flavoring that it should.

Can I use water instead of beef broth for beef stew?

Yes, you can use water instead of beef broth for a beef stew however you’ll need to be ready to sacrifice some flavor if that’s all you’re going to use for your liquid form in there.

You should try adding some bouillon cubes to boiling water to at least contribute more to the meaty flavoring of the dish. If you’ve got some wine or beef to hand, pour a little bit into the recipe to add rich and well-rounded flavors to the sauce so it’s not too watery.

Adding some drops of soy sauce to the recipe will also add some saltiness that some beef broth would bring to a beef stew.

Can I use Worcestershire sauce instead of beef broth?

Yes, you can use Worcestershire sauce instead of beef broth in recipes, as well as soy sauce or other liquid aminos that give the dish a rich flavoring with only a few drops.

Beef broth may be a staple ingredient in many recipes but as you can see, there is a wide variety of substitutes that are just as healthy.  You'll find your favorite beef broth recipe can be modified to make beef gravy or beef soup. Sometimes all it takes is a little tomato paste.

As long as you measure all your ingredients properly, each alternative will give your meal a distinctive yet delicious taste. 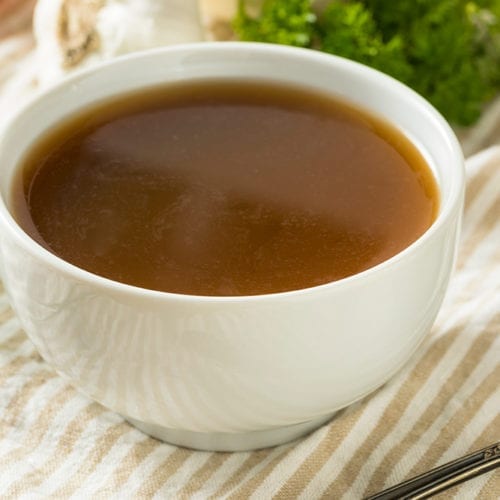 Beef Broth Substitutes You Should Be Using