Beef broth and beef consomme are very similar liquids. Consommé is the French word for perfect, or to make complete. So you could say that a broth is simply an unfinished consommé.

Many people confuse stocks and broth, however they are not the same.

Stock is made with just the bones being simmered, whereas broth is made by simmering bones with some meat remaining on them.

The word bouillon is commonly used interchangeably with the word broth. Bouillon is usually referring to a condensed beef broth, often that has been dehydrated and condensed further.

It commonly comes in cubes or powdered form.

Broth and consommé are culinary staples and are often described as the basis of many good dishes.

The addition of either massively enhances the flavor and depth of any dish, making it richer, luxurious, and more sumptuous.

How is beef broth made?

Beef broth is made by gently simmering chunks of beef, usually tougher ones, in water. These could be bone marrow or shank, bits of meat that people do not usually eat.

This allows all of the nutrients to be extracted and to mix with the liquid.

Traditionally these are the only ingredients, however as people’s palates have developed other things have been added. These include onions, celery, peppers, and onions.

It is cooked over a low heat and is never boiled as this can cause the broth to become cloudy. You must remove all grease and fat from the surface of the broth during simmering.

The simmering period is anywhere between 3 and 24 hours. This can be a very slow process, which is why many people opt to buy a premade one from the store.

It is very easy to make as all of the ingredients are readily available, but it is hugely time consuming. You can purchase beef broth in either liquid or solid states.

It is a good idea to leave your broth in a slightly unseasoned state. This means that it is more versatile and can easily be added to any dish without making it overly salty.

You can adjust the seasoning to cater to the dish you are making during the cooking process.

How is beef consommé made?

Beef consommé is a mixture of beef broth and egg whites that has been simmered together. This is known as a clarified broth.

People will then add any combination of flavorings to this liquid. Common choices include ground beef, tomatoes, carrots, onions, celery, and parsley.

Your first step is to separate the eggs. You will need to whisk the egg whites gently until they reach stiff peaks, around 3 minutes with an electric whisk. This will begin to incorporate a little air.

This is then mixed with the ground beef and whatever vegetables you are using. Traditionally chefs use a mirepoix. This is a mixture of carrots, onions, and celery which are finely diced.

At this point, you should season with pepper, bay leaves, or bouquet garni. Be careful not to oversalt the consommé.

The consommé is gently heated for many hours, never coming to the boil. You should stir constantly until the consommé reaches a temperature of 120 degrees Fahrenheit.

This allows the proteins in the egg whites to bind to the impurities contained in the stock. This forms a light grey film on the surface of the liquid. This film is known as a raft. You will need to cut a hole in this layer to allow the broth to bubble and ‘breathe’.

You should allow the consommé to simmer for around an hour to clarify correctly.

This is then strained through muslin or cheesecloth to remove any impurities.

Beef broth is clear, thin, and light brown in color. It is free of grease.

Beef consommé on the other hand is clear but dark amber. It is thicker than broth and should be free from impurities due to the straining process.

Beef broth has a mild but discernible beefy flavor. It is commonly used in soups and sauces, as well as to make gravy.

It can also be used when braising meat and vegetables to impart additional flavor. Some people will even drink beef broth straight!

Beef consommé should have a more powerful, rich, and concentrated beef flavor. As it is a more enhanced and refined broth, this can be a stand alone dish.

It is commonly served as a soup for an appetizer, but can also be added to soups and stews to enhance the flavor.

Another use of consommé is to make something known as aspic. This is a savory jelly that is set in a mold with vegetables and pieces of meat. Think of something similar to the 80s Jello salad.

What is the history of broth?

Bone broth has been a medicinal staple for centuries. In Chinese medicine more than 2,500 years ago it was believed that it could strengthen the digestive system and your kidneys.

Hippocrates in Ancient Greece shared this belief and thought of broth as a cleansing dish. Even in South America this idea persisted. There is a proverb stating that “a good broth can resurrect the dead.”

It began to gain popularity in 12th century Egypt when a Jewish physician, Maimonides, prescribed chicken soup to patients.

It was used as a treatment for asthma, flu, and the common cold. It began to be referred to as the Jewish penicillin, and the ideas of its healing power have persisted across time. 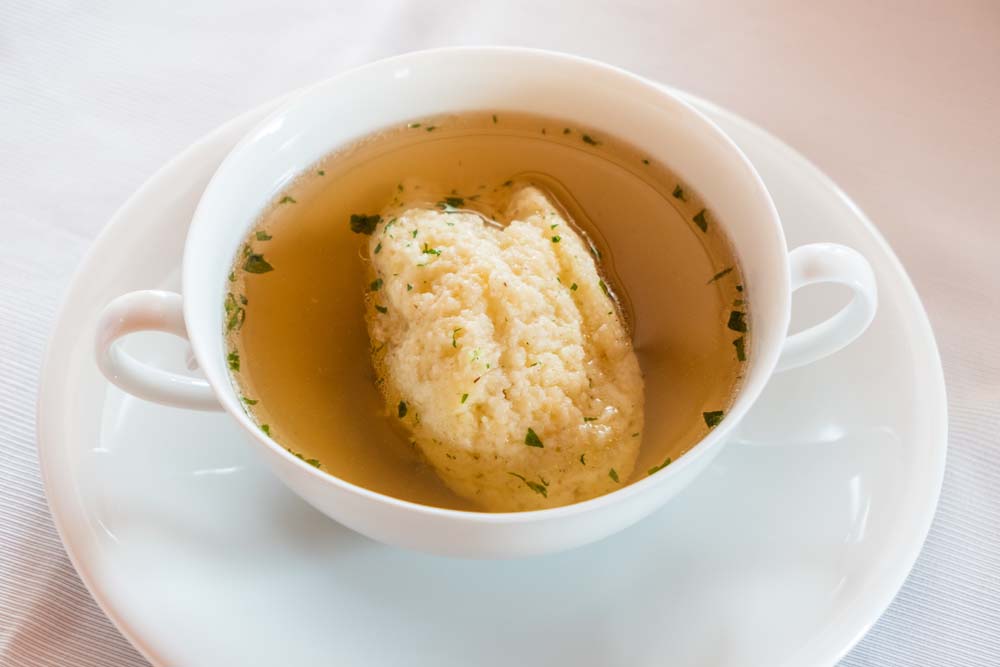 What is the history of consommé?

Consommé dates back to medieval times and is believed to have originated from Europe. The word originally did not serve as the name of the dish, rather it referred to the cooking techniques used.

It was seen as an upper class dish that signalled riches and refinement. This is due to the large quantity of meat required to make it, so not everyone could afford to make it.

Around the same time, a sweet version of consommé was created. This incorporated dried and preserved fruits into a clear, gelatin based liquid that was then poured into a mold to set.

This is likely an early version of modern day Jello.

Consommé began to fall out of favor in around the 1980s, except in a few upper class restaurants.

Recently, the nutritional value of bone broth has begun to be more widely discussed. This has led to a boost in popularity, and consommé is beginning to make a comeback.

Strangely enough, consommé was also combined with vodka in the 1960s. The drink is known as a Bull Shot and was made by combining 2 parts beef consommé with vodka, a dash of Tabasco, ice, and lemon.

As expected, this was not massively popular. Marilyn Monroe even described it as “a terrible thing to do to vodka!”

As broth and consommé are both water based, neither is particularly calorie or indeed nutrient dense.

Both contain negligible amounts of fat, carbohydrates, calcium, and iron. Considering the high concentration of meat extracts in both dishes, they contain very little protein.

Consommé contains 2g more of protein per cup than broth, likely due to the egg whites used for clarification.

The only nutrient that the liquids are particularly high in is sodium, and so this is something to be aware of. You cannot regularly consume large quantities of either, as this could lead to health issues such as hypertension.

Can consommé be substituted for condensed beef broth?

Yes, there is no reason why this would not work. Both condensed broth and consommé are much more viscous than regular broth. They also both have a much richer flavor.

Consommé is a more expensive and refined product than condensed broth. If you are using it to bulk out a dish with other, stronger flavors, there is little point in using the pricier consommé.

However, if you will be able to taste the consommé and wish to up the luxury of your dish, it is worth substituting.

Can you substitute consommé for broth, and vice versa?

You can do this, although you will need to take a few steps prior to adding them to your dish.

You can simply dilute consommé with water to make it a good substitute for broth. This will make the flavor more mild and thin out the consommé to the same consistency as broth.

If you have a lot of time, you can clarify the beef broth yourself in order to make consommé. However, if you are pushed for time then a better option is either bouillon or condensed beef broth.

These are nowhere near as rich as consommé, and will not create the exact same flavor profile. In a pinch, this would work. It is better suited for stews and soups as opposed to aspic.

What is a good plant-based substitute for beef consomme?

If you have a favorite dish that calls for beef consomme but is otherwise plant based, there is a way to work around this. We recommend using a mushroom consommé in place of a beef one.

This will add a lovely umami flavour to your dish in the same way as beef consommé would, but without hurting any animals.

Can you freeze broth and consommé?

Yes, you can freeze beef broth. This is ideal as it means that you can make broth in large quantities and have it on hand for a long time.

You can also freeze consommé as the base contents are water and fat, both of which hold up well in the freezer.

When placing into containers for freezing, you should ensure your containers are airtight. You should leave a minimum of an inch or two of space at the top. This is because liquids expand as they freeze, and leaving space allows the liquid to expand without breaking the container.

You should also ensure that the containers are clearly labeled with the contents and the date the broth or consommé was made.

What variations can you have on consommé?

For a regular beef consommé, you should use approximately one pound of ground beef per 3 quarts of beef broth.

You can reduce the amount of ground beef if the consommé is too rich and flavorful. Alternatively, if it is not strong enough then you can increase the meat to stock ratio.

What are good garnishes for consommé?

Simplicity is best when it comes to consommé. We advise using a few vegetables such as carrots and celery. Additionally, you could use bay leaves, thyme, and peppercorns to delicately flavor the consommé.

If you are feeling particularly adventurous, sliced crepes are a great addition to a consommé. It can enhance the undertones of your consommé and give it a more tangy feel.

We do not advise adding too much and crowding your bowl. When you begin to add lots of extras, your consommé runs the risk of becoming more like a soup.