Cognac is a liqueur renowned for its sweet flavor and classy attitude. Those who enjoy this unique liqueur carry a certain air of refinement and sophistication.

Cognac can be pricey, but you can use any type of affordable cognac. The important thing is that it be as good a quality of cognac as you can afford. You can drink cognac neat or in a glass with ice cubes. However, we love a good cognac cocktail, so we’ve found the best.

But what is it about this liqueur that gives it its cool and classy swagger? Let’s find out.

Cognac is named after Cognac, France, as it is a sweet brandy wine produced in the Charente-Maritime and Charente regions. French law dictates that the name Cognac can only be used when describing a specific French brandy made from a certain wine grape. The grapes are distilled twice with pot stills or unique alembics, then aged for a period in Limousin oak barrels.

Each production step, from cultivating the grapes to distilling new brandy wine, must happen within specified regions of Charente-Maritime and Charente.

Cognac dates back to the 17th century, back when wines of this region were specially distilled to adapt to transportation to long-distance European ports. Over time, the brandy wine coming out of the Cognac distinct was recognized as the best of the best, and the government has since then strictly regulated its production.

Cognac’s designated age references the amount of time the liqueur spent in wooden barrels. Older cognac has a much more complex, smoother, and refined taste. However, it’s rare for Cognac to remain barrelled for over 50 years.

As far as taste, Cognac has a lovely, smokey flavor, which many compare to a cigar.

How much does Cognac cost?

The cost of Cognac depends on the brand you buy. However, you should anticipate spending between $30 and $50 on even a low-end brand, while the higher-end Cognacs can cost $100 or more.

How to Drink Cognac?

Cognac is traditionally enjoyed as an after-dinner aperitif. Many who smoke cigars enjoy doing so with Cognac because the flavors complement each other.

Cognac is a drink that’s slipped slowly and savored, but you can also use it in a wide variety of delicious Cognac cocktails.

What to mix with Cognac?

There are a lot of diverse Cognac mixed drinks that combine multiple spirits and ingredient mixtures to create one-of-a-kind experiences.

And when it comes to what to mix with cognac, there are some great Cognac mixers such as fresh lemon juice, sweet vermouth, simple syrup, aromatic bitters, orange liqueur, ginger ale, wine, lime juice, lemon, and lemon zest.

And Cognac cocktails can be served in different glassware, such as a rocks glass, cocktail glass, a highball glass, a wine glass, and many others.

You can also make drinks using various bartending tools, such as a mixing glass and a cocktail shaker.

One of the more exciting Cognac cocktails is the Japanese cocktail, which first appeared in Jerry Thomas’ How to Mix Drinks bartender’s guide in 1862. However, this cocktail has no Japanese spirits at all. Many speculate that it was named in honor of a Japanese delegation that visited the U.S. in 1860.

The men paid a visit to Thomas’ bar in New York, and it’s likely he created the drink to commemorate the occasion.

The drink is made with Cognac, Orgeat, and Boker’s or Angostura Bitters.

The world-famous drink known as the Old Fashioned is an iconic classic cocktail for sophisticated drinkers. And this Wisconsin recipe replaces whiskey to create a fantastic brandy cocktail.

Another thing that makes the Wisconsin version of Old Fashioned unique is the “wash,” which is when you add seltzer or soda to a drink after mixing it. This Cognac Old Fashioned recipe describes different options to use the wash to suit your tastes.

We love this recipe because it breaks down the wide variety of garnishes and washes you can use with this drink. My personal favorites are lemon twist, orange twist, orange peel, and lemon zest.

Many people might think this recipe for Sazerac is a twist on the original, but in truth, it’s actually closer to the original recipe than the one used today. You see, before the late 1800s, Cognac was used in the original Sazerac recipe until a disease called phylloxera destroyed French grapes, causing a shortage in Cognac. After that, many began using whiskey instead.

And while I admit, Sazerac made with rye whiskey is a beautiful thing, the original flavor using Cognac is a whole new experience.

Garnish these Cognac drinks with a lemon slice or twist.

The sidecar is a classic cocktail that uses orange liqueur, cognac, and fresh lemon juice to create a delightfully sweet, citrusy, and flavorful drink.

The sidecar was created during the prohibition era, but not in America. While there are many stories about who invented the drink, most people believe it came from Paris, France.

One popular legend suggests the drink was created in honor of an American Army officer who arrived at a local Paris bar every night riding in a motorcycle sidecar.

During the 1970s, there was a bit of an explosion of new Cognac-based cocktails, many of which bore the names of popular movies. One such cocktail is the “French Connection,” named after the 1971 film starring the legendary Gene Hackman.

However, beyond the likely inspiration for the name, nothing else is known concerning the drink’s exact origins. The drink mixes Amaretto liqueur with a Cognac such as Hennessey to produce a delightfully sweet drinking experience.

Many garnish their Cognac French Connection with a lemon twist or slice.

The stinger dates back to the early 1900s and was initially made using brandy and creme de menthe. And the very best Stinger cocktails use high-quality VSOP Cognac. However, the mid-range versions are pretty good as well.

Now, when it comes to Cognac cocktails for cigar smokers, the Stinger is highly recommended. It’s also a fabulous after-dinner drink that almost tastes like a dessert drink. However, this cocktail contains no mixers, just pure alcohol, making it a pretty stiff drink.

The Milk Punch is a unique Cognac drink that’s easy to make and has a slight spiciness. It’s a favorite brunch-time sipping drink, which also makes for a beautiful after-dinner aperitif.

This classic cocktail mixes Cognac, Jamaican rum, whole milk (or cream, or half and a half), and simple syrup. If you don’t or can’t drink dairy products, the different kinds of nut milk contain more oils and better mimic the creamy texture you want for this drink.

And as for Cognac, we highly recommend the Pierre Ferrand Ambre, which is a surprisingly affordable brand with notes of apricot, sweet vanilla, and pear.

Garnish with a lemon twist.

While there are many versions of the Margarita to choose from, the Cognac Margarita is a proper stand-out.

This delicious drink blends Hennessy Cognac, Tequila, Triple Sec, Sweet & Sour Mix, with Tajín (or sugar) on the rim and a lime or lemon garnish.

The Margarita also has one of my favorite origin stories. One legend suggests the drink was created by accident in 1942 when the girlfriend of a bartender named Francisco Morales asked him to make her a drink called a “Magnolia.” He got most of the ingredients right, except he used tequila instead of gin. When she mentioned this, he played the whole thing off and claimed he misheard her, saying he thought she asked for a “Margarita.”

The provocative cocktail called “Between the Sheets,” is very similar to the classic “Sidecar” cocktail, except this version has a base of rum and Cognac. It’s said to have been invented in Paris, France, at Harry’s New York Bar by owner Harry MacElhone. But, a more colorful origin story suggests it was developed in one of the many French Brothels during this wild and crazy era.

The ingredients for this drink include Cognac, white rum, orange curacao, lemon juice with a lemon twist for garnish.

The sultry and colorful cocktail known as the “Vieux Carré” is a contribution from the city of New Orleans to the famous family of Manhattan drinks. It’s a variation of the Saratoga, and it’s sweetened using just a splash of Bénédictine along with the city’s world-famous Peychaud’s bitters.

The recipe calls for Cognac (such as Remy-Martin VSOP), rye whiskey (like Rittenhouse 100 or Wild Turkey), sweet vermouth like M&R Rosso, Dolin, Bénédictine, Peychaud’s bitters, and Angostura bitters, with a lemon twist for garnish.

Another sensational New Orleans cocktail is the Almond Crusta, a big sipper hailing from the Big Easy invented in the 1850s by Joseph Santini at his world-famous bar on Gravier Street. It was partially named “Crusta” because of its sweet sugar-crusted rim.

The recipe calls for Cognac, gin, lemon juice, orgeat, and Angostura bitters with a lemon twist for garnish. 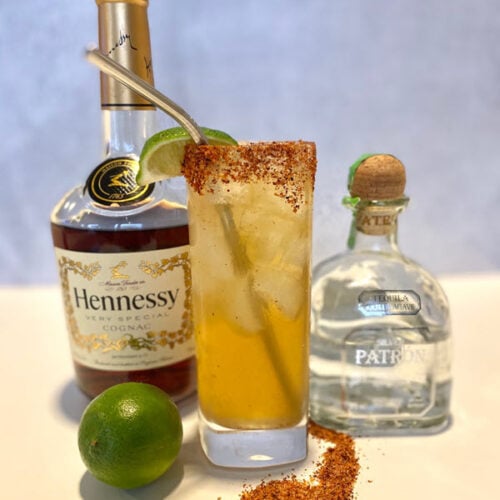 These recipes are sure to please. So, gather your family and friends and enjoy. Let us know your thoughts!
5 from 6 votes
Print Recipe Pin Recipe
Total Time 14 mins
Course Drinks
Cuisine American
Servings 2
Calories 321 kcal

Calories: 321kcal
Keyword cognac cocktails, cognac milk punch
Tried this recipe?Let us know how it was!