The history of Amaretto liqueur in Italy is a love story dating back to the 1500s when a young widow gave Bernardino Luini, an art student of the legendary Leonardo da Vinci, a gift. The innkeeper had just become his model, and there were rumors she was also his lover. The gift was a unique drink made from the kernels of apricots and soaked in brandy.

These days, you can buy expensive and high-quality Amaretto liqueur, but if you want to go with a less expensive option, it’s likely that you and your guests won’t notice the difference if you’re using Amaretto in mixed drinks. For this reason, Amaretto can be considered an affordable luxury cocktail.

Today, amaretto is a long way from its romantic origin, as it’s become a staple in bars and liquor cabinets worldwide. This sweet, warm, and flavorful drink is typically enjoyed after dinner or as a little “night cap.”

However, despite its interesting history, amaretto alcohol has evolved into almost a swiss army knife drink that’s used in nearly countless cocktails.

Some of the best amaretto drinks include cocktails like toasted almond and stone sour, just to name a few.

First, let’s take a closer look at this iconic liqueur to understand its unique character better.

What is Amaretto Made From?

While amaretto itself is a sweet drink, the word means “a little bitter in Italian.” The name has to do with the drink’s bitter almond notes. You see, the base of amaretto is made with either almonds or apricot kernels. Now, the apricot kernels do contain poisonous compounds. However, the alcohol takes out the benzaldehyde (or bitter almond flavor), which means the toxic hydrogen cyanide isn’t in the liqueur. Finally, amaretto is sweetened sometimes with ingredients such as sweet almonds.

As for amaretto alcohol content, the drink has between 21 and 28 alcohol per volume (AVB) depending on which brand you buy, which gives it a mid-range alcohol content compared to 40 percent in spirits such as rum, vodka, gin, and whiskey.

A lot of folks often ask, “What flavor is Amaretto?” The most obvious answer is almond since it’s usually made with almonds and has a bit of a nutty taste. However, there are also strong notes of vanilla as well as a very subtle bitter finish.

When buying this almond liqueur, we highly recommend going with at least a mid-priced bottle as low-quality amaretto brands are often too sweet and miss out on the sophisticated balance of sweet and bitter that makes amaretto flavor special. However, if you’re looking for one of the best on the market, we highly recommend Disaronno Originale Amaretto.

How Much Does Amaretto Cost?

Amaretto is mid-priced compared to other liquors in its category. While pricing and quality vary, the most common price range for a 750-milliliter bottle is between $10 and $20.

Below we’ve collected 10 of the best amaretto cocktails you can make right at home.

Amaretto stone sour is a very citrusy drink that’s light, sweet, refreshing. This cousin of amaretto sour is made with orange juice and is the ideal cocktail for lazy afternoon brunches or just sitting out in the backyard with a good book.

This drink has a sweet-tart taste with just the right amount of nutty amaretto finish. And many would be surprised at how the drink is barely related to amaretto sour, not to mention its interesting history.

While amaretto stone sour has a reputation for being a classic 70s drink, its history can be traced back to 1917 in a book called “The Ideal Bartender” by author Tom Bullock. This book was the first cocktail recipe book ever published by an African American author. In the volume, the recipe for stone sour called for orange juice, lemon juice, gin, and rock candy syrup.

Now, many believe that bartenders sometime in the 1970s found Bullock’s book and altered the recipe to create amaretto stone sour. However, Tom Bullock’s contribution had been forgotten in history.

The classic dessert cocktail known as toasted almond is a sweet and creamy drink that’s been a showstopper for many years. The drink balances amaretto, vodka, heavy cream, and Kahlua to create a flavor that tastes like toasted almonds. There’s just something about coffee liqueur in this drink that gives it a roasted flavor, adding intrigue and balance to this delicious cocktail.

Oddly enough, there’s not much history out there about this mysterious drink. In many cases, these drinks are created in bars by anonymous bartenders or just someone playing around with recipes, switching one ingredient for another. For example, it’s possible someone decided to make a mudslide and got a bit creative.

When we think of margarita, the first thing that comes to mind is the classic Mexican drink. However, the Italian margarita is a deliciously intriguing Mediterranean version that combines both worlds. This cocktail swaps the orange liqueur, replacing it with amaretto. The drink’s almond essence gives it a very distinct Italian vibe.

Now once again, this remix of the classic margarita’s history is unknown, but we know a lot about the origins of the original margarita. It was created by Daniel “Danny” Negrete in 1936 when he managed the Garci Crespo Hotel located in Puebla, Mexico.

Legend has it that Negrete created the drink accidentally while trying to make his girlfriend a similar drink called a “magnolia.” Negrete says he told his girlfriend he knew how to make her drink when he didn’t. As a consequence, he used tequila instead of gin.

When she commented on the drink’s different taste, he told her he misheard her and thought she asked for a “margarita,” a word representing the flower known more commonly as the “daisy.”

I have to admit. I’m not the biggest scotch fan out there. The Scottish whiskey is definitely an acquired taste for many who enjoy American whiskey. That said, there’s something magical when you combine scotch with amaretto. You get a delicious drink called the Godfather.

This drink is bursting with flavor, and the amaretto’s sweet, nutty flavor is the perfect companion to scotch’s spicy finish.

As for the history of this drink, we are again faced with a mystery, as no one knows for sure who invented it. However, the drink’s popularity exploded in the 1970s when robust and sweet cocktails were all the rage and often included amaretto. Many believe the name comes from the famous Godfather movie starring Marlon Brandon, which premiered in 1972.

When it comes to easy cocktails, the French Connection, much like the Godfather, is one of the easiest you can make. The concoction is simple amaretto and cognac. This drink is definitely a sophisticated slow-sipping cocktail.

The amaretto gives the cocktail a distinct almond essence that pairs well with the strong sweet flavors of the cognac.

This is another cocktail that made its first appearance among a slew of amaretto recipes during the 1970s. While the creator remains a mystery, the drink is believed to have been named after the 1971 film “The French Connection,” starring Gene Hackman.

Amaretto sour is perhaps the most popular amaretto cocktail in the world. The drink combines just the right balance of bourbon, amaretto, and lemon juice for a fantastic experience.

Now, most recipes use a sweet and sour mix for amaretto sours, but this one only uses lemon juice.

You can also add a bit of lime soda or club soda in place of bourbon to reduce the drink’s sweetness.

We’ve found that the bourbon gives the drink a better balance between tartness and the amaretto’s sweet flavor. The bourbon also adds caramel, vanilla, and oak notes to complement the almond notes.

Amaretto whiskey sour is a spin-off of the classic whiskey sour cocktail that dates back to the 1860s. However, it’s also said that sailors in the British Navy enjoyed a similar drink long before that period.

One of our favorite cocktails, one part dessert, one part beverage, and 100 percent delicious, is Amaretto coffee.

When I first tried this spiked coffee drink, I figured it would be good. But after my first sip, my eyes widened, and I was blown away by the cacophony of rich flavors.

The amaretto delivers a note of sweet, nutty flavor to the spice in the coffee that’s hard to put into words. Top this drink with whipped cream and a bit of cinnamon, and you’ve got a real treat on your hands!

The fantastic cocktail known as the Alabama Slammer sounds more like a pro wrestler out of Birmingham than a delicious drink. This recipe uses three ingredients: amaretto, gin, and southern comfort.

The drink is another child of the amaretto renaissance in the 1970s. The Alabama Slammer was created near the University of Alabama and quickly became a favorite among students.

The amaretto and gin have a strong presence but are perfectly balanced by the sweet fruity flavor of Southern Comfort.

There are many variations to the popular amaretto drink known as the “Italian Sunset.” In this recipe, they use Disaronno Originale Amaretto, club soda, orange juice (pulp-free), and a bit of grenadine.

There’s not much about the history of this marvelous cocktail. However, whoever came up with this fantastic drink deserves a standing ovation!

You can also check out this video with three more sensational Amaretto cocktails! 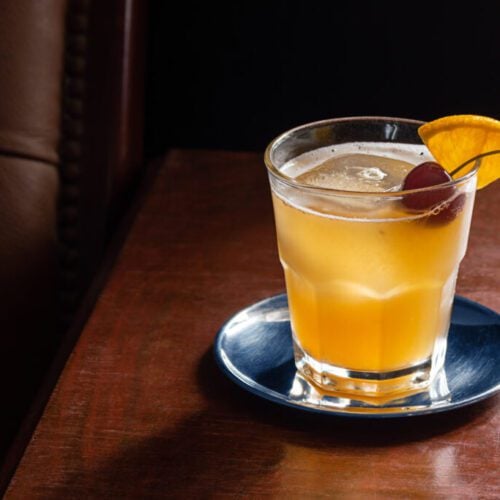 These recipes are sure to please. So, gather your family and friends and enjoy. Let us know your thoughts!
5 from 6 votes
Print Recipe Pin Recipe
Total Time 14 mins
Course Drinks
Cuisine American
Servings 2
Calories 232 kcal

Calories: 232kcal
Keyword amaretto cocktails, toasted almond
Tried this recipe?Let us know how it was!