Mushrooms are a staple of many different cuisines around the world; they’re loved for their earthy taste and meat-like texture, which also makes them a popular ingredient in vegetarian and vegan dishes.

However, there are hundreds of different types of edible mushrooms out there, and it would be a shame to just stick to one variety all of the time. 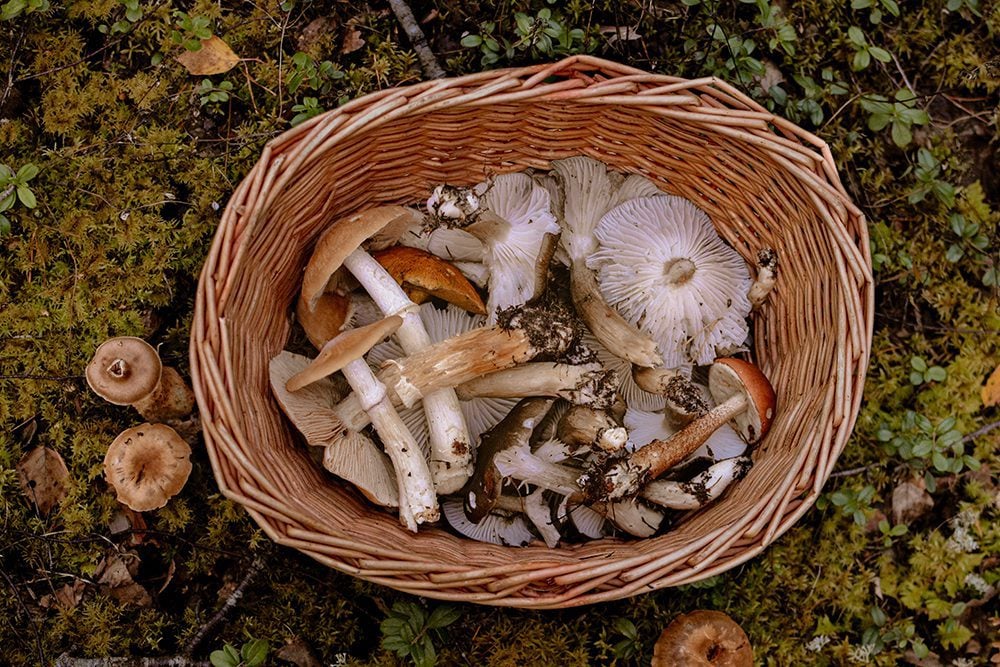 This article aims to explore the different types of edible mushrooms out there, focusing mainly on commercially-cultivated fungi.

We won’t have space for every single one, but we’ve done our best to fit a variety into this article.

Before we get started, there are a few important things to consider before you buy, pick or eat mushrooms: 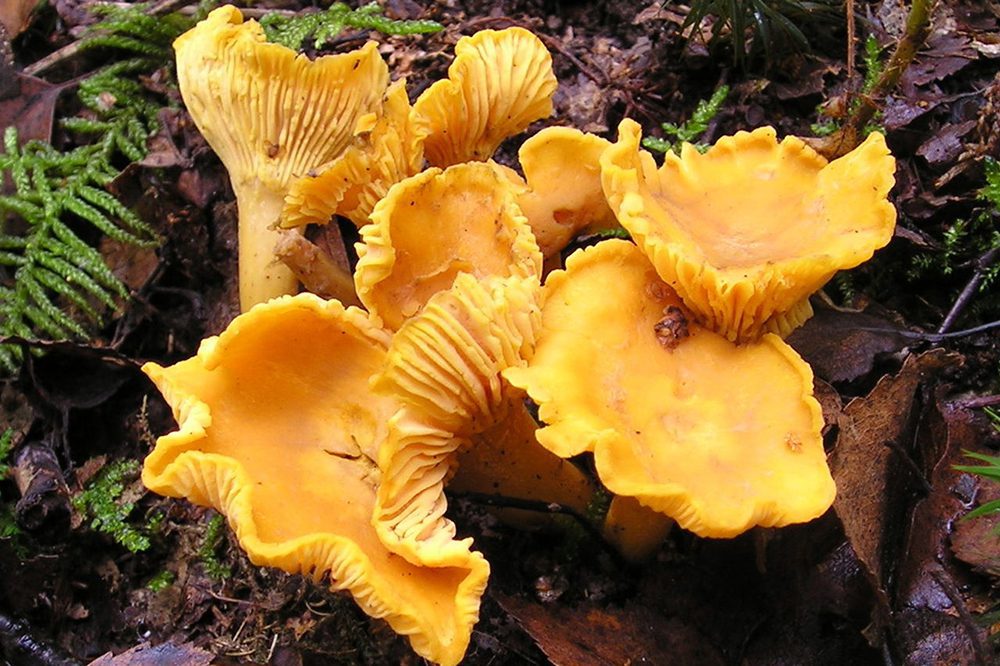 This mushroom has a very distinctive golden color and shape, making it easy to distinguish from other potentially toxic mushroom varieties.

It grows across Europe: from Scandinavia to the Mediterranean Basin and is mainly found in deciduous and coniferous forests. Cantharellus cibarius is typically harvested from late summer to late fall in Europe.

The Cantharellus cibarius is a commonly eaten mushroom used in many culinary dishes. They can be preserved by either drying or freezing, though drying in the oven can result in a bitter taste. 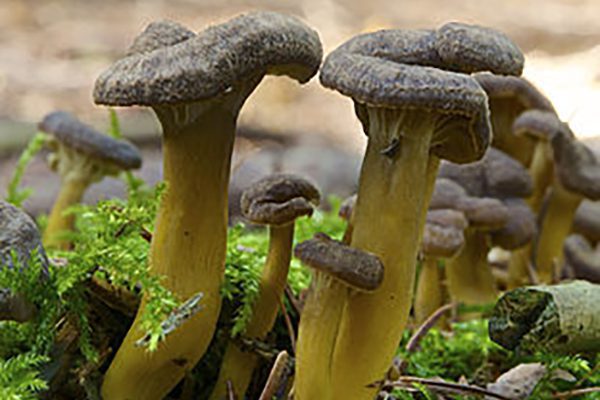 Craterellus Tubaeformis is a yellowish-brown and trumpet-shaped mushroom with a dark brown cap, paler gills, and a hollow yellow stem.

It’s found in great numbers late in the mushroom season, which is why it’s often called the “winter mushroom.” This type of mushroom is mycorrhizal, meaning it forms symbiotic associations with plants, which makes it difficult to cultivate.

Craterellus Tubaeformis is smaller than the Golden Chanterelle and also tastes stronger, with a less fruity flavor. When eaten raw, it has a very distinctive smokey, peppery taste.

The Craterellus Tubaeformis grows in temperate and cold parts of Northern America and Europe and can be found in regions such as Scandinavia, Russia, and the British Isles, as well as the Himalayas in Asia, central parts of the Indian Subcontinent, and Thailand. 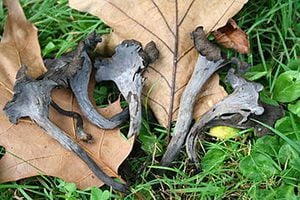 Craterellus Cornucopioides’ name comes from references to the Cornucopia in Greek mythology, a magical horn that filled itself with whatever meat or drink its owner requested. Hence the other name of the mushroom being ‘horn of plenty.’

This mushroom is also known as the "trumpet of the dead", as some perceive the mushrooms as trumpets being played by dead people under the ground.

The fruiting body of this mushroom is shaped like a funnel, expanding at the top up to about 10 centimeters (4 inches) tall and spanning up to 7 cm (3 in) in diameter.

The upper and inner surface of the mushroom is black or dark grey, while the lower and outer fertile surface is usually a paler shade of grey.

This dark-colored fungus can be found in woodlands across Europe, North America, Japan, and Korea. Usually, you’ll find it under beech, oak, or other broad-leaved trees, and it favors moss and moist spots on heavy calcareous soil. 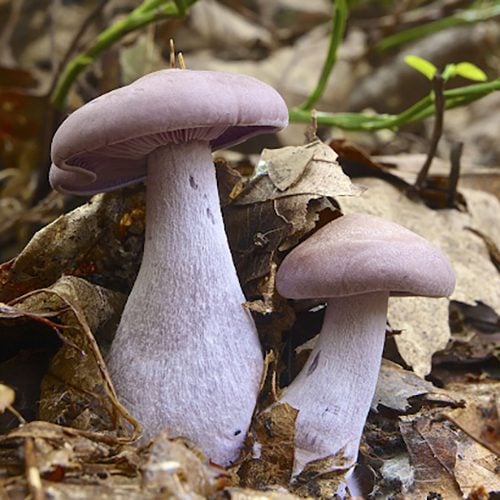 Clitocybe Nuda is an edible mushroom native to Europe and North America and found in both coniferous and deciduous woodlands. This mushroom has been cultivated in Britain, the Netherlands, and France.

Its coloring ranges from lilac to purple-pink, though some found in North America are duller and more of a tan color, though will usually still have purplish tones on the stem and gills.

The stem of this mushroom is short and stout, and mature specimens will have a flatter cap and darker color, while younger ones have a lighter color and more convex cap.

However, the Clitocybe Nuda should be treated with caution: it can cause allergic reactions and should never be eaten raw. It’s best to brew this mushroom in stews or sauté in butter. 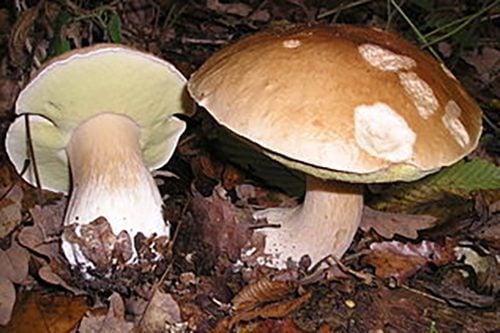 Boletus Edulis is found in the Northern Hemisphere across Europe, Asia, and North America. While it does not naturally occur in the Southern Hemisphere, it has been introduced to southern Africa, Australia, New Zealand, and Brazil.

This fungus grows mainly in deciduous and coniferous forests and tree plantations and is known to form symbiotic ectomycorrhizal associations with trees by enveloping the roots with sheaths of fungal tissue.

This mushroom has a large brown cap which can sometimes span 35 cm (14 in) in diameter and weighs up to 3 kg (6 lb 10 oz) in total. It’s a highly-prized ingredient in culinary dishes such as soups, pasta, or risotto.

However, this mushroom is hard to cultivate, so while it’s available fresh in fall across central, southern, and northern Europe, most often it is dried and packaged before being distributed worldwide. 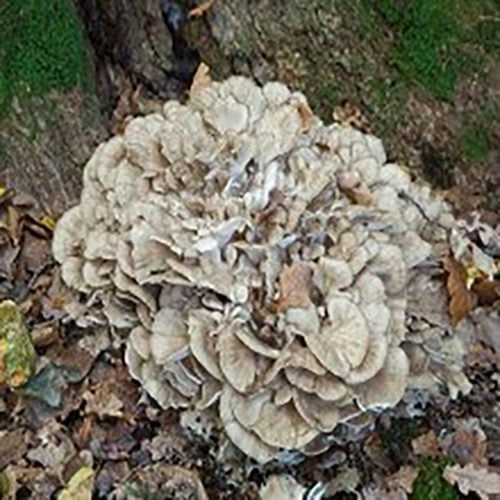 This interesting looking fungus is typically found in late summer to early autumn and is native to China, Europe, and North America.

In the U.S, it’s most commonly found in the northeastern regions but has been found as far west as Idaho.

The fruiting body of this mushroom can grow as large as 100 centimeters (40 inches) and is a cluster of multiple grayish-brown caps that are often curled or spoon-shaped.

In Japan, the mushroom has been known to grow to more than 45 kilograms (100 pounds), which is why it’s often referred to as the "king of mushrooms.”

However, you should exercise caution when picking or eating this mushroom, as it can cause allergic reactions, and it also looks similar to some toxic varieties. 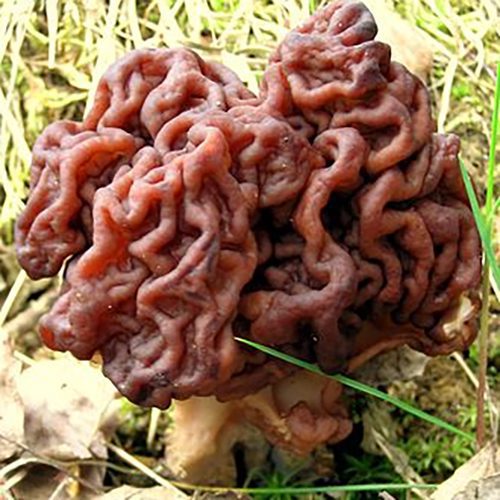 This strange-looking specimen resembles a brain and is a popular delicacy in Scandinavia, Eastern Europe, and the upper Great Lakes region of North America.

It’s also popular in some districts of the eastern Pyrenees, however, its sale to the public is prohibited in Spain. In Finland, it can be sold fresh but requires accompanying warnings and instructions on the correct preparation.

The irregularly shaped cap of the mushroom may be up to 10 cm (4 in) high and 15 cm (6 in) wide, and can range in color from red tones to chestnut, purple, bay, dark, or even golden-brown.

For instance, examples of this mushroom found in California feature reddish-brown caps.

This mushroom must be eaten with extreme caution, as it can cause allergic reactions and can be fatal if eaten raw. fresh mushrooms should be parboiled twice in a lot of water - using fresh water in a ratio of  3:1 both times.

Gyromitra esculenta is commonly parboiled before preparation, however, there is evidence suggesting  that even this procedure may not make the fungi entirely safe for consumption 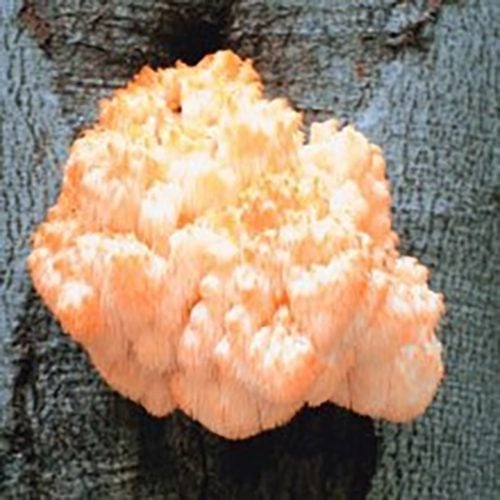 Hericium Erinaceus is an edible mushroom that belongs to the tooth fungus group and is identified by its long spines or tendency to grow in clumps.

This mushroom is native to North America, Europe, and Asia, and the fruit bodies can be harvested and used as food. In Europe, the fungi are mainly produced annually between August and November.

The fruit bodies of H. erinaceus are characterized by their large, irregular bulbous tubercules that span 5–40 cm in diameter, and are often dominated by crowded, hanging, spore-producing spines, which are approximately 1–4 cm long.

The color of the fruit bodies and spines range from white to cream but can turn yellow-brown with age. 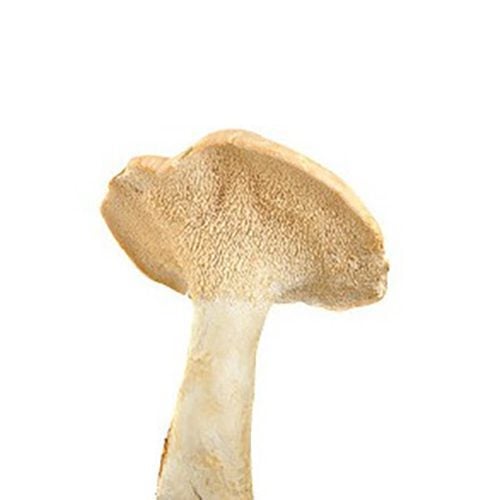 It’s characterized by spore-bearing structures, which resemble spines rather than gills and hang from the underside of the cap.

The cap of this mushroom is usually yellow to light orange or brown in color, and it’s not unusual for it to develop an irregular shape, especially when grown closely to other fruit bodies.

This mushroom can sometimes stain orange when it is bruised or as it grows older, and can also become more bitter with age.

The tissue of the mushroom is white and has a pleasant odor and a spicy or bitter taste. The great thing about H. Repandum is that it has no poisonous look-alikes. 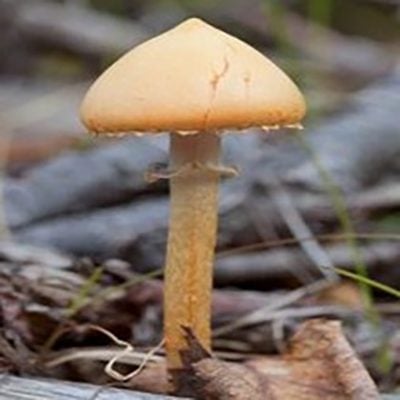 Cortinarius Caperatus is a mushroom popular with foragers and is found mainly in the northern regions of Europe and North America where it is picked seasonally.

The fruit bodies appear in autumn in coniferous forests and beech woodlands but can also be spotted in heathlands in late summer and autumn.

The cap of this mushroom is ochre-colored and spans up to 10cm (4in) across.

The gills are clay-colored and are attached to the white-toned stripe under the cap. The flesh has a mild smell and flavor, however, these mushrooms are commonly infested with maggots.

There are many other types of edible mushrooms other than those included in this article.

As we said earlier on, it’s essential that you read up on a particular type of mushroom before picking or buying it, and certainly before eating it.

Confusing a mushroom with a poisonous one can be fatal, and many species can trigger allergic reactions, so always research beforehand and follow any cooking instructions carefully.