You won’t find the enoki mushroom on as many restaurant menus in America and it’s a shame because this Asian delicacy really has its own unique flavor.

Enoki mushrooms are a very unusual-looking variety that looks more like bean sprouts than mushrooms. Like shitake mushrooms, they can be tough to find, and you’ll likely have to look for them in specialty markets that sell Asian ingredients. However, the effort is well worth it as these are super flavorful mushrooms.

If you’re looking for an enoki mushroom recipe you can use to make at home that won’t take up your entire evening, you’ve come to the right place.

You might have also seen enokitake or enokitake mushroom listed but it’s the exact same mushroom.

If you’re wondering how to cook enoki mushrooms then the recipes below will give you something easy to start with.

Sit back and learn a little more about this delicious mushroom you can use in almost any ingredient.

What Exactly Is An Enoki Mushroom?

Enoki mushrooms are a wild variety of fungus that is native to East Asia but have been slowly making their way around the world.

They aren’t as widely known as an oyster mushroom or portobello mushroom and, therefore, they might not be available in your local grocery store.

They are long white mushrooms with a very small head at the top.

They are edible and almost look like enoki mushroom ramen when they are all together.

They are more common when eating Japanese cuisine and Chinese cuisine where they are used similarly but in different dishes.

You might have to go to a specialized store to find fresh enoki mushrooms or you can try a health food store that has a greater variety of fresh produce.

How to store and clean Enoki Mushrooms

Getting a batch of wild enoki mushroom might feel like a great accomplishment in itself but you want to make sure to keep them clean and well kept if you’re going to cook with them.

The better you are able to take care of them, the better your meals are going to end up tasting.

You want to make sure to store them in a bag that doesn’t cut off all circulation but still provides a layer of protection.

The layer of protection can be good for both your mushrooms and the other items in your fridge so that the pores don’t get over everything.

A brown paper bag should be good enough but just make sure to fold the top down so that there isn’t any big opening.

You don’t want to stick them in a produce drawer inside your fridge either because that will also cut off too much circulation and could cause your mushrooms to rot.

You also want to make sure you give them a quick rinse before you start cooking with them.

Mushrooms grow directly out of the ground and will contain some of the dirt they were grown in, like most vegetables and fruits.

Giving them a quick wash and moving the dirt off with your hands will be the best way to clean them before using them.

How to Cook Enoki Mushrooms

The recipes below will give you a great guide to figure out how to use enoki mushrooms with other ingredients but there are some simple steps you’ll need to take before cooking with enoki mushrooms.

First thing’s first, you need to use a sharp knife and cut off the entire stem of the bunch of enoki mushrooms.

At this point, the enoki mushrooms have been held together by the stem but after cutting it off, you can start to break them apart to have individual mushrooms.

Using your fingers, gingerly move the enoki mushrooms apart to create separation so they all become individual strands.

Now that your mushrooms are prepared, you’re ready to start cooking them over medium heat.

When you’re looking for something simple that can still make a big impact, try out this spicy enoki mushroom recipe.

These little guys are the perfect size to pop into your mouth and although that may sound a bit strange, it’s exactly what you’ll want to do once you smell the intoxicating flavors in the air.

The spicy flavor is going to make these mushrooms a hit at any party or gathering but since they’re so simple, you can whip up a ton of them and they’ll be gone in no time.

You might even find that you need to make more because people love snacking on these savory treats all night long.

For a real treat, make a big batch and start throwing them into other dishes you need a little kick with like a pizza or pasta dish.

Miso soup is well known as a Japanese dish that can be eaten plain or along with other ingredients to make a full meal.

You can add tofu, scallions, and even seaweed to the soups to make it tastier and more filling.

This recipe for enoki miso soup focuses on using both these mushrooms and tofu in an easy preparation that is fast and delicious.

Miso has a distinct flavor because it’s a fermented soup, so if you’re not used to that extra taste then it can take a little getting used to.

But when you throw in some edible mushroom into the mix, the earthy flavors balance perfectly with the miso.

This is a great dish to make a ton of ahead of time so you can have some you pour into a bowl throughout the week.

This dish is going to take some patience to create but that’s what makes it so dang good.

For starters, have you ever heard of twisted tofu knots? Neither had we until we tried this recipe.

The knots create the perfect texture for your salad that is mixed with a ton of ingredients that combine perfectly in your mouth.

You’ll have all kinds of savory flavors in this salad that will make you crave a second bowl.

There’s even some oyster sauce thrown in so you know this salad is packed with a ton of funky flavors that go well together.

You won’t find an enoki mushroom taste with as much flavor as this enoki garlic and scallion dish because the flavors blend together perfectly to provide a party for your taste buds.

The minced garlic and scallion with olive oil give this sauce a major flavor while the mushrooms add a little more dimension to the dish.

There are also some basic steps you can take to make this dish easy as pie to make.

You can also cook it all at once and eat the entire dish but if you’ve never had enoki mushrooms before, this is a great recipe to try them out without too many other ingredients that might overpower them.

When you’re ready to explore the savory side of what enoki has to offer, try out this bacon-wrapped dish that is sure to please any palate.

These go great as an appetizer to any dish but you can also just keep a few around to use as a hearty snack to keep you full throughout the day.

The recipe is simple, just wrap the enoki mushroom in bacon and bake it until crispy.

It may seem like a strange combination at first but you’ll find that these mushrooms go great with the smoky flavors of the bacon and if you’ve never had them before, it’s a great way to try them without too many other ingredients.

Experiment with how many enoki mushrooms you stuff under one bacon too, so you can see exactly what you like and don’t like.

Want an easy recipe that you are already probably familiar with to try out your enoki mushrooms with?

This story fry is the perfect choice for anyone who is looking for a filling meal without too many ingredients.

All you need for this recipe are the enoki mushrooms, rice, and soy sauce so it’s perfect for anyone who can’t spend too much time in the kitchen or doesn’t have access to a variety of ingredients.

You can even buy yourself a bag of stir fry vegetables in the freezer aisle to make this dish incredibly easy to put together.

It’s another great option to make a ton of food and stick the leftovers in the fridge for later.

When the weather starts getting cold outside it’s hard to resist a delicious bowl of pho and when you add enoki, the taste only gets better.

This recipe for enoki pho is vegetarian but you can add a few ingredients if you’d like it to be more filling.

For example, you can use beef broth instead of the traditional water base to make this dish taste even thicker and full of flavor.

What’s fun about this recipe is you can add in a ton of different vegetables to make the dish even more colorful and beautiful.

People usually associate pho with being a huge soup but this recipe can also be made into an appetizer or side dish if you want. 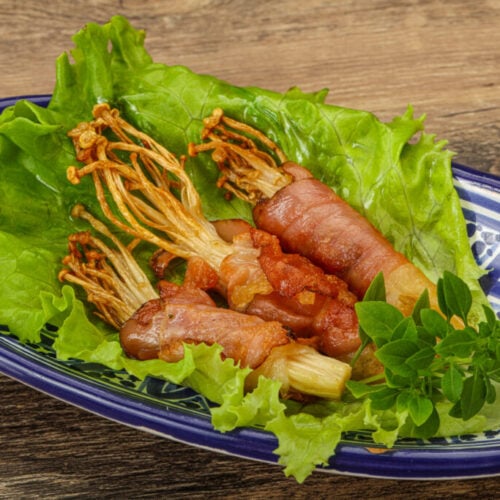 These recipes are sure to please. So, gather your family and friends and enjoy. Let us know your thoughts!
5 from 7 votes
Print Recipe Pin Recipe
Total Time 34 mins
Course Appetizer, Main Course, Side Dish
Cuisine American
Servings 4
Calories 275 kcal