Looking at a perfectly served bowl of Vietnamese pho might be a little intimidating to think you could make this on your own. A quick thanks to Knox Marshall for the inspiration behind this recipe.

In recent years, Vietnamese food has become increasingly popular. It seems like we’re seeing Vietnamese restaurants and food trucks showing up everywhere we look. The success of Vietnamese food revolves around three main dishes: the noodle salad called bun, the banh mi sandwich made with a baguette, and pho soup.

Contrary to popular belief, pho didn’t make its way west as the result of the Vietnam Conflict. Rather, the French brought pho westward in the 1800s. And pho isn’t pronounced like “foe.” The correct pronunciation of this delicious soup is “foo” or “phoo.” The pronunciation comes from the French word for fire.

The truth is, this dish is easy once you have a recipe that shows you step-by-step how to make pho. That’s especially true if you also know a few secrets on how chefs get their pho soup to taste so dang good.

So jump right in and learn how you can get the same great-tasting pho in your home next time you need a warm meal.

Insider Secrets on How to Make the Best Pho

Pho is a traditional Vietnamese dish and originated in Hanoi, the capital city of Vietnam.

Pho soup is a rice noodle soup that consists of broth, spices such as onions, ginger, and cardamom and, meat such as beef or chicken.

The noodles are cooked in boiling water until they’re soft but still firm to avoid disintegrating during consumption.

When you get a taste of pho, you can really see how all these ingredients blend together to make a delicious tasting and sophisticated meal.

What’s even better is that you can use a ton of different condiments based on your personal preferences to really make this dish your own.

The pho broth is going to be the most important part of the soup because that’s where all the flavors meld together.

Because the dish can take a little extra effort than most other meals, you’ll want to make some extra broth so that you can freeze it and save it for a later time.

The way to make a great bone broth is by getting a high-quality beef bone to use. You could make a chicken pho recipe where you use chicken bones but it won’t have the same dense flavor.

Your best options are going to be the knuckle and leg bones because they will contain the most marrow that helps deliver all the sophisticated flavors.

While you can find some beef bones from your local grocery store, you’re guaranteed to find them in the closest Asian market.

Sure, you can purchase your own beef bone broth if you’re low on time and need to make this dish faster, but you’re really just short-changing yourself.

Parboil and Rinse Your Bones

Once you pick out the best bones, you’ll need to give them a good cleaning before adding them to your broth.

The reason being, when you simmer your bones they will end up releasing scum into your broth and cause it to get cloudy.

The scum is really just impurities that are in the bones themselves and won’t come out unless you give it a good boil first.

Place the bones in a pot of water and boil for a few minutes. Strain out all your water and give the bones a good wash under the sink.

This should get rid of all the scum so that your broth can be pure and full of delicious flavor, not impure particles.

Prep Your Onion and Fresh Ginger

You don’t technically have to take these steps in order to make a good-tasting pho, but if you want five-star restaurant-quality pho that will impress your friends, take the extra time to follow through with these steps.

Take your onion and ginger pieces and put them in a small pan and place them in your broiler for a few minutes until they’re charred. The charred onion and ginger flavor will really bring an umami kick to your pho.

Just like with your onion and ginger, the more care you put into your ingredients, the better your pho will be.

Place your spices in a pan and give them a quick toast before adding to your beef broth and you’ll be surprised at just how much flavor this gives your pho.

You’ll want to make sure you toss the spices a few times while they are toasting so that they don’t end up actually burning instead.

The whole process only takes a couple of minutes and once you get a whiff of an aroma, it should be good to go.

Use a Special Sugar

It might be tempting to grab your plain old white sugar from the pantry because it’s already there, but if you substitute it with yellow rock sugar, it can really make the dish pop.

The white sugar tends to leave your pho a little flat and sweeter but the yellow rock sugar blends perfectly with the other ingredients in your pho.

You’ll also have plenty of yellow rock sugar left, so that the next time you make pho you will already be prepared.

If you haven’t added some fish sauce to your Asian dishes, then you really are missing out.

You’ll never want to get a huge whiff of this sauce because it’s quite funky but that’s exactly what gives your pho broth recipe its great taste.

Glass bottles of fish sauce are generally better tasting than plastic ones because the plastic container can mess with the overall taste.

You won’t have to break the bank either for fish sauce, so get a couple to have around because once you add it one time, you won’t be able to keep it from getting into most of your meals.

Fresh noodles are going to be the best option for your pho because they will have more flavor than using dried noodles, but since there is already a ton of flavor, you can get by with some dried noodles.

The key though, is to never cook your noodles in the same pot as your broth. It might be tempting so you don’t have to clean another dish, but it’s also going to make your broth look all cloudy and dirty.

Condiments of Your Choice

What makes pho a dish for the people is that you can add any type of finishing condiment to give it that added flavor you love.

When it’s time to serve and add in the last condiments, you could use fish sauce, hoisin sauce, chili oil, or hot chili sauce. You could also add some chili pepper to your pho as well if you don’t prefer a sauce.

If you go to a Vietnamese restaurant you’ll probably see a bottle of Sriracha sitting on the table because the slight spice goes a long way in your pho. 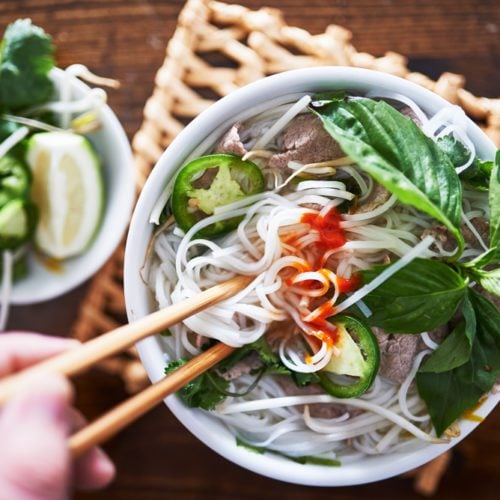 Using this recipe, you'll be able to whip up a tasty bowl of pho soup without anything going wrong. Even though the total cook time is a little intimidating, don't worry. Most of that time is spent waiting for the soup to simmer so that all the flavors of your ingredients can mix together. Use all the helpful tips that this article pointed out above so that you can have the best pho you've ever had.
5 from 8 votes
Print Recipe Pin Recipe
Prep Time 20 mins
Cook Time 3 hrs
Total Time 3 hrs 20 mins
Course Main Course
Cuisine Asian
Servings 4
Calories 245 kcal

Calories: 245kcal
Keyword vietnamese pho recipe
Tried this recipe?Let us know how it was!

How to Serve Pho

When you’re serving your pho it’s best not to just have all your ingredients tossed into your pho and hand it to your guests. You’ll definitely want to ladle hot broth into a bowl or else it could go everywhere and waste all your hard efforts.

Pho is so good not just because of the delicious flavors, but also because you can customize it to your specific preferences.

You can squeeze in as much lime juice as you want or throw in as many beansprouts as you can handle. Another classic pho ingredient to add is bok choy because it has a crisp, refreshing taste with a flavorful broth.

Another umami flavor you can add to your pho is some shiitake mushrooms, which have an earthy flavor that goes really well with your beef.

So when you are serving your pho, just keep the broth, beef, and noodles in the bowl and leave all the other ingredients on the side.

Make sure to grab your condiments as well, because no pho is any good without some hoisin sauce or hot chili sauce in the mix. You can use soy sauce if you have it but it won’t provide quite the same taste.

The beef can come out looking a little pink and that’s OK because when it gets dipped into the hot broth it will end up cooking to a perfect medium-rare.