Bok choy is a popular vegetable in many of the world’s Asian cuisines, and this green vegetable can be a healthy side dish that’s quick and easy to make. Bok choy is similar to cabbage and, using the stir-fry method, you can create bok choy that has tender-crisp stalks and gorgeously browned edges. Adding stir-fried bok choy to your collection of healthy recipes is a win for your family, and they’ll thank you for it.

Bok choy is sometimes called Chinese cabbage or bok choi, and this leafy green cabbage is a staple in kitchens where Asian cuisine is cooked. The leaves are dark green and tender, while the off-white stalks are crispy and give you a solid crunch. The greens taste similar to spinach and have a mild bitterness that isn’t noticeable once your food is cooked. 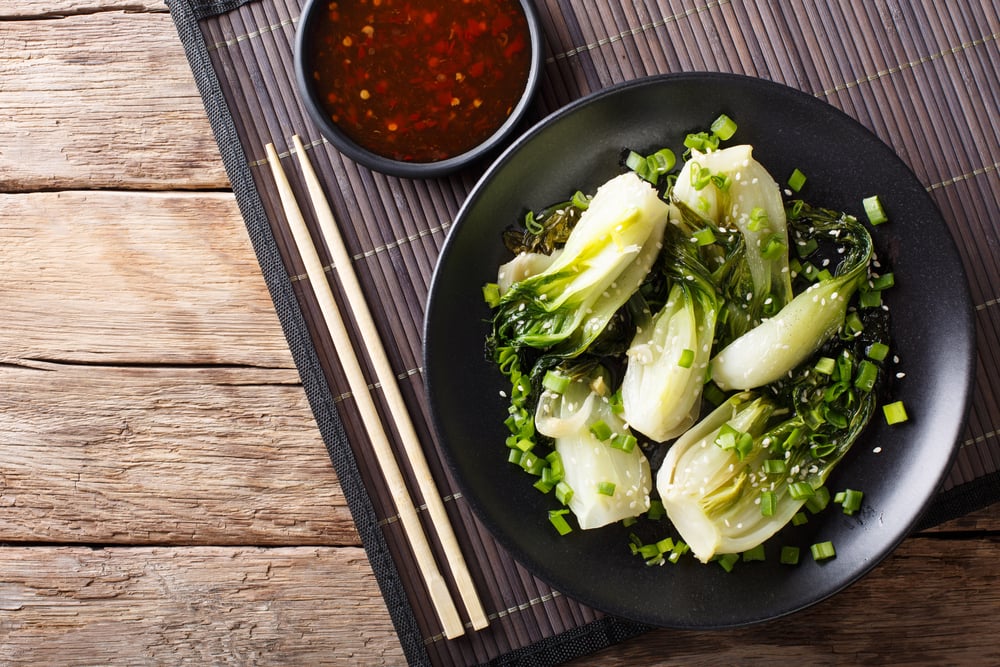 You can buy two types of bok choy: baby bok choy and regular bok choy. The regular bok choy has stalks that are larger and more mature. These have to be chopped into small pieces. You can eat the green leaves raw in fresh green salads, but the taste is much better when the entire cabbage is cooked.

When you’re shopping for bok choy at your supermarket, look for bright green leaves that haven’t started wilting. The off-white stalks should be firm and not have brown spots. Bok choy can be stored inside a plastic bag that’s loosely closed in the fridge. Store bok choy for between 3 and 5 days. Don’t wash bok choy until you’re ready to use it. 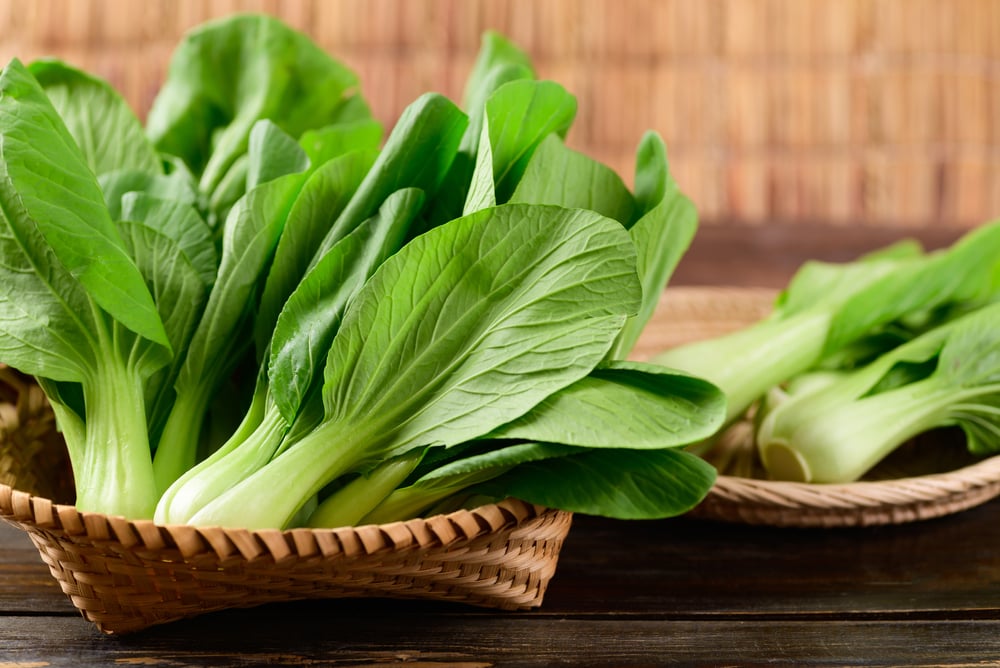 It bears mentioning that this delicious cabbage is easy to grow at home. If you have a garden, try planting some seeds to see if you can have veggies to cook from your own home garden.

How to Prepare Large Bok Choy

To cook regular bok choy (larger bok choy), thoroughly wash and dry the stems and leaves. Begin by cutting the leafy green sections away from the stalks. Then, stack them atop each other. Using a sharp knife, cut the greens into long, thin strips crosswise.

For the stalks, cut them into smaller pieces. Ideally, they would be between 1/2 and 1 inch in size. Throw away or compost the root section about an inch from the bottom. Your raw bok choy stalk pieces can be saved to use in stews, soups, or a stir-fry recipe.

How to Prepare a Baby Bok Choy Recipe

Because baby bok choy is so tender, you can eat it whole or cut it up into smaller pieces. To begin, add the bok choy to a bowl of cold water. Plunge the bok choy into the water a few times to remove the excess dirt. Another alternative is to rinse the bok choy under running water.

Shake the excess water and moisture off of the bok choy, then use paper towels or a clean kitchen towel to dry the vegetable thoroughly. If you cut baby bok choy into halves after you wash it, you will need to repeat this drying process with the insides as well. This is especially important if you’re making sauteed bok choy or bok choy stir fry. The larger whole portions are ideal for saving for stews or braising.

There are several different ways to cook bok choy, and you can use some of these same techniques to cook Napa cabbage. Bok choy can be braised, steamed, and simmered. However, all of these cooking methods cause the stems to be overcooked, and the consistency can be mushy.

The key is to stop cooking the bok choy as soon as the stalks are starting to get tender. This process takes between 5-8 minutes, but it depends largely on the vegetable’s size and the cooking method you’re using.

When you cook dishes such as stir fry with dry heat methods, you get the perfect texture contrast, with the process of browning adding a whole new flavor dimension. In these types of recipes, the bok choy gets to be the star of the show. Halves of regular bok choy and whole baby bok choy pieces are fully cooked in approximately 5-7 minutes. Chopped, smaller pieces of bok choy that are used in stir fry are perfectly tenderized in less than 3 minutes.

There are lots of ways you can prepare bok choy, but for the best flavor development and browning, stir-fry bok choy is your best bet. To cook bok choy, you can use a large nonstick skillet or wok for browning and tenderizing the bok choy greens. To create two halves, cut the bok choy lengthwise down the center. This will also give you a stunning presentation while also keeping the bok choy’s structure intact after it has been cooked.

Put the oil in the skillet and let it get to just above the smoking point. Place the bok choy cut-side down in the skillet, and don’t move them except to use your spatula to press them down into the skillet. Letting them sit like this as they cook gives you a deeper color.

Once your bok choy cooking side is nicely browned, use tongs or a spatula to flip them over and cook with the same process on the other side. Now, you can stir-fry your bok choy with a tasty sauce to add even more delicious flavor.

There are tons of things you can add to bok choy recipes to give them a superb flavor. For this recipe, the bok choy gets its stunning flavor from soy sauce, rice wine vinegar, honey, minced fresh garlic, grated fresh ginger, and red pepper flakes. The green onion gives this bok choy a lot of flavor, too. When cooking the garlic, make sure it doesn’t burn. Burning garlic ruins the flavor and adds a slight bitterness to your bok choy recipe. You can also add a little freshly ground black pepper for more flavor.

The sauce that’s made near the end is what gives this bok choy its amazing flavor. The combination of vegetable broth, soy sauce, sesame oil, rice wine vinegar, red pepper flakes, and honey is absolutely perfect. If you want, you can also use chicken broth to make this recipe.

Grilled bok choy is delicious, as is a garlic bok choy recipe. You can prepare bok choy with garlic sauce over noodles for a yummy vegan meal. Sautéed baby bok choy is a delicious side dish with a sesame seed sprinkle for any Asian food main dish. 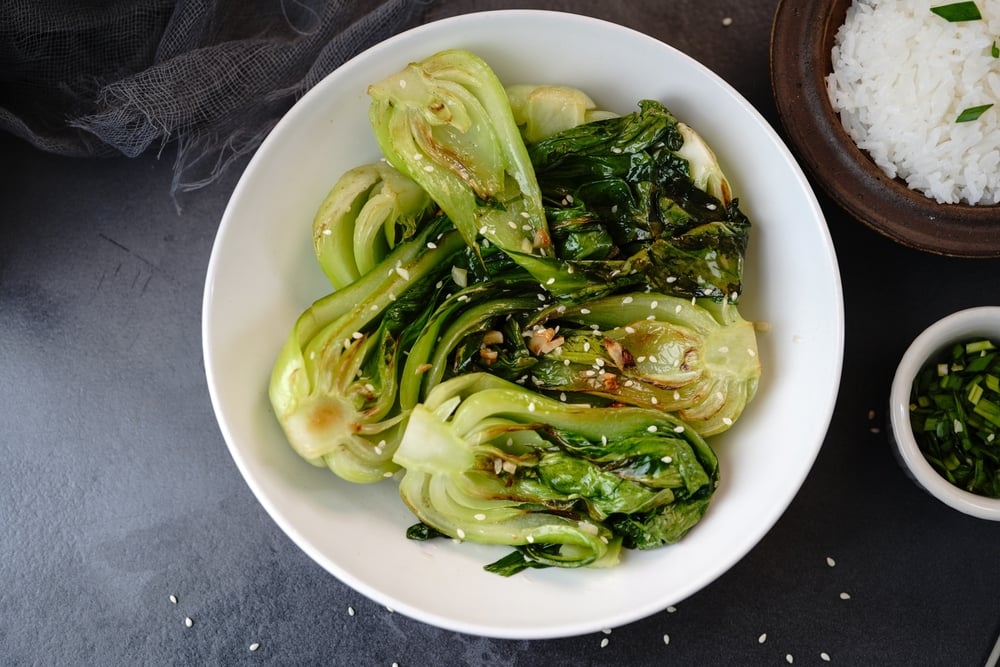 The secret to the perfect bok choy is to avoid moving the cabbage. This will give you the deep golden brown color you’re looking for. Even if it’s tempting to look at the cabbage to see if it’s browning, resist the temptation. Let the bok choy sit there and cook for a few minutes, then flip it. It’s the combination of high heat, hot oil, and direct contact with the hot pan that gives you the perfect light char and toasty, nutty notes. 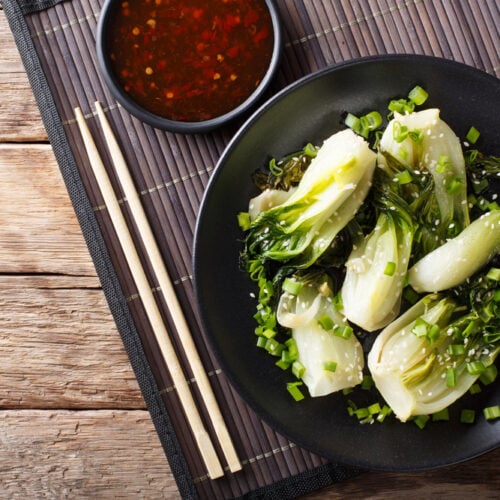 How to Cook Bok Choy

Calories: 123kcalFat: 11g
Keyword bok choy stir fry, how to cook bok choy
Tried this recipe?Let us know how it was!