Noodles are a staple in Asian cuisine, and they’re now eaten all over the world, whether cooked at home or enjoyed as part of a take-out.

Noodles are made from unleavened dough. The dough is rolled flat and cut and stretched into long strips which can vary in thickness.

They’re usually cooked in boiling water, but can also be pan-fried or deep-fried. Noodle dishes are frequently served with fried vegetables, meat, and sauce, but they can also be put into a soup. 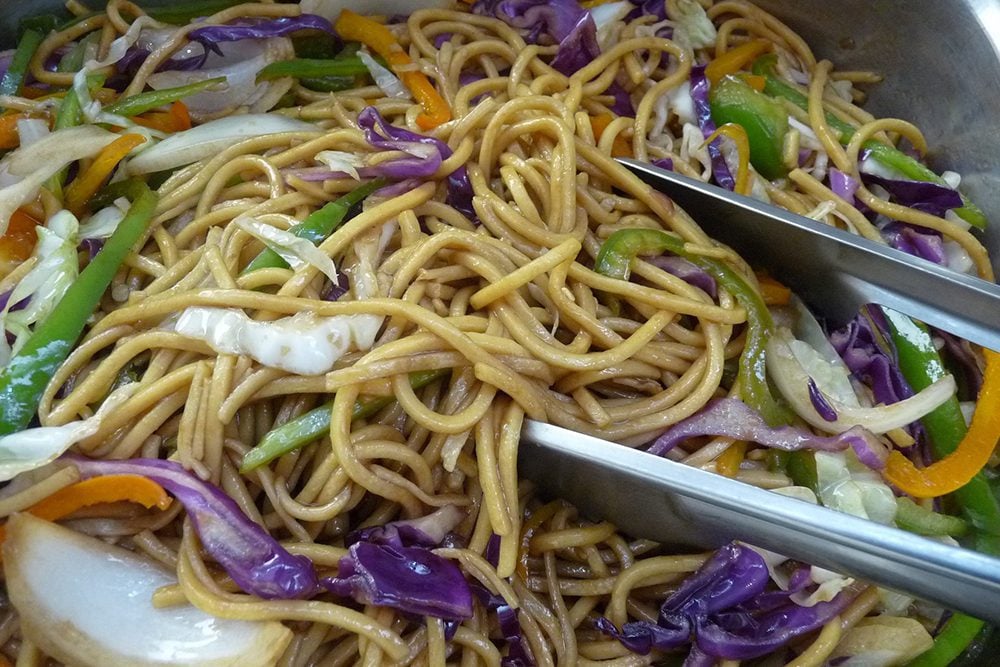 Noodles are a staple food in many Asian cuisines, from Chinese to Japanese, Korean to Filipino.

There are many types of noodles out there, but today we’re going to look at the difference between “Chow Mein” and “Lo Mein” noodles.

“Mein” is the Chinese word for noodles, and noodles can differ significantly in terms of how they’re cooked and prepared, the thickness of the noodles, and the ingredients.

So if “Mein” simply means noodles, what’s the difference between Chow Mein and Lo Mein?

Let’s take a look at the differences between these two dishes.

Chow mein frequently features on the menus of Chinese restaurants and take-outs all over the world. “Chow'' means fried, so simply put, Chow Mein is fried noodles.

The name is a romanization of the Taishanese chāu-mèn and is particularly popular in India and Nepal, as well as western countries such as the UK and the US.

The noodles in a Chow Mein dish are fried on both sides until they turn brown, which is why the dish is popularly known as ‘twice-browned” noodles. You can also have chow mein varieties that are steamed or crisp.

Steamed chow mein contains noodles that have a rounded shape, while the crisped varieties tend to be flat, and are sometimes referred to as “Hong-Kong” style.

In the U.S., Chow Mein is usually a stir-fried dish containing noodles, meat such as chicken, pork, or beef, onions, and celery.

Sometimes meat is substituted with shrimp or tofu, and these days, vegetarian or vegan Chow Mein is increasingly popular.

In the US, there is a regional difference between how the East and West Coast define "Chow Mein".

In Mandarin, the dish is called lāo miàn, and in China, the noodles in this dish are thin, and usually made of egg, which gives the noodles a more elastic texture.

The noodles are boiled and usually tossed with vegetables, meat and sauce. 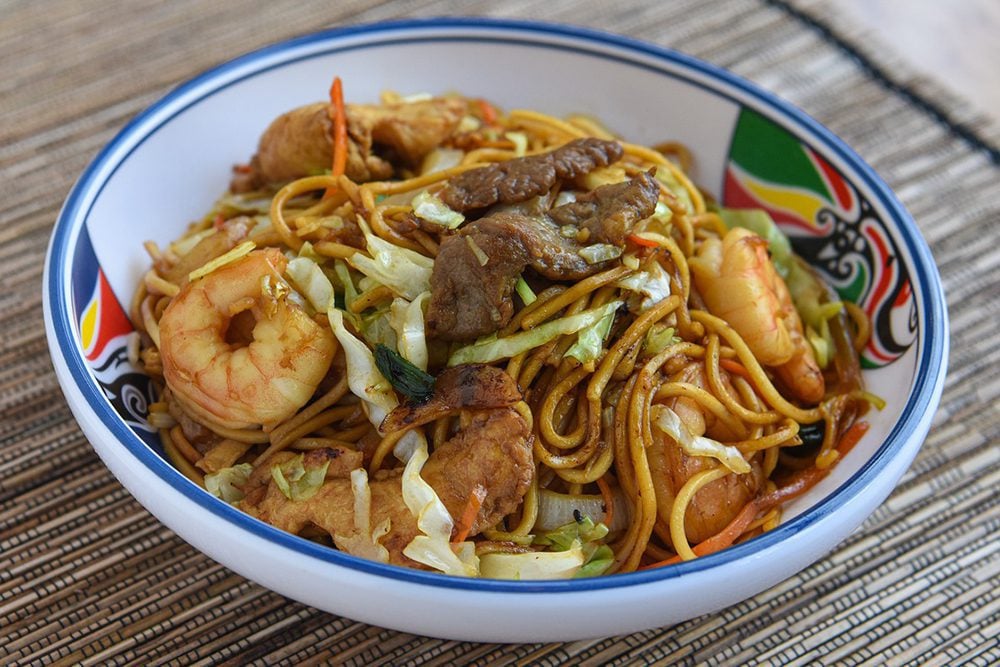 Lo Mein usually contains vegetables as well as some type of meat or seafood: usually beef, chicken, pork, shrimp, or wontons, but a vegetarian variety is also common, and the dish is frequently eaten with just vegetables.

Lo Mein is traditionally a dry variation of noodle soup, where the soup is separated from the noodles and the other ingredients and served on the side.

In the US, Lo Mein is a popular take-out dish, and it’s sometimes considered synonymous with Chow Mein.

American-Chinese Lo Mein is different from both traditional Cantonese Lo Mein, as well as varieties of Cantonese Chow Mein such as crispy Chow Mein.

U.S. Lo Mein noodles are usually stir-fried with soy sauce and other seasonings, with vegetables such as bok choy and cabbage often added as well as meats like roast pork, beef, or chicken.

It’s not uncommon to see varieties of Lo Mein such as Shrimp Lo Mein, Lobster Lo Mein, Vegetable Lo Mein, and "House" Lo Mein, which is cooked with a variety of meat. Cantonese Lo Mein is stirred with a thin sauce and served with wonton or beef brisket on top.

Lo Mein noodles are boiled and are usually cooked until they are al dente or a little softer.

When it comes to how healthy these dishes are, Lo Mein certainly comes out on top, as Chow Mein is fried and therefore has a higher fat count.

That said, both Lo Mein and Chow Mein will provide some source of fats, carbohydrates, and proteins if meat or seafood is added to the recipe.

However, the nutritional value of Lo Mein and Chow Mein is largely dependent on the ingredients you use, as well as the way in which the dish is cooked.

Using plenty of fresh vegetables in both dishes is a good way to up your nutritional value and fiber intake, while using lean meat like chicken will provide a source of protein.

Noodles, particularly whole wheat varieties, are a great source of carbohydrates and fiber, and noodles are low in saturated fats, so they’re a great staple food regardless.

It’s worth bearing in mind that if you order a Chow Mein from your local takeout, it’s likely to be laden with heavy sauces and may be deep-fried, whereas if you make it at home, you can modify the amount of sauce you add and monitor things like salt and oil to make the dish healthier.

Of the two, Lo Mein is the healthier dish, due to the noodles being boiled rather than fried. Other than that, there isn’t much difference in the nutritional value of the dishes.

To make your noodles healthier, simply add more veggies and cut down on the sauce. You can also avoid red meat or even opt for tofu instead.

Lo Mein noodles are soft, especially when they have been cooked. The noodles that are used in lo mein are egg noodles. The best kind of egg noodles will be found in the fresh section of the grocery store.

If you want to stock up on noodles, there is the option to purchase dried egg noodles too. While these do not taste as fresh, and will need to be boiled before they are used, they are a useful option too. They will keep far longer in comparison to fresh egg noodles.

Dried egg noodles are hard when they are first purchased, but once they are cooked, they will soften and become soft like the fresh egg noodles too.

While lo mein and chow mein do have similar characteristics and ingredients, they do have their differences. It is these differences that do cause both dishes to taste slightly different. While there is not a huge difference in the taste, it is noticeable.

The main difference in the taste of chow mein and lo mein is how they are cooked. When making lo mein, the noodles are tossed in the sauce and mixed in with the ingredients and not fried.

With chow mein, the noodles are fried, which causes them to be more crunchy in their texture and less soft in comparison to lo mein, even though both recipes use egg noodles.

Chow Mein is a popular dish among the Chinese diaspora and is nearly always included on take-out and restaurant menus.

Lo Mein is lesser-known and is sometimes seen as being synonymous with Chow Mein, even though traditionally there are differences between the two dishes.

Don’t forget, Chow Mein on the East Coast is nearly always cooked until crispy or "Hong Kong-style", whereas on the West Coast, "chow mein" is usually the steamed variety.

Lo Mein uses boiled egg noodles so the dish is generally healthier, but in the U.S, it is often served in a different way to the traditional Cantonese version - usually featuring vegetables, meat, and soy sauce mixed together.

These dishes are both extremely versatile and can feature a variety of sauces, meats, and vegetables. Personally I love a lo mein noodle in a lo mein dish. In my mind there's nothing better than an egg noodle or tossed noodle with a dash of oyster sauce. Of course who doesn't love stir fried noodles or chicken lo mein. Fresh noodles in a stir fry are awesome.

Alternatively, they can also be made vegan or vegetarian. You have free reign, and can make your noodles as nutritious or as comforting as you wish!