When regular sized mushrooms aren’t enough you need yourself a king oyster mushroom.

Either way, they are huge and provide a huge amount of flavor and texture to any meal! 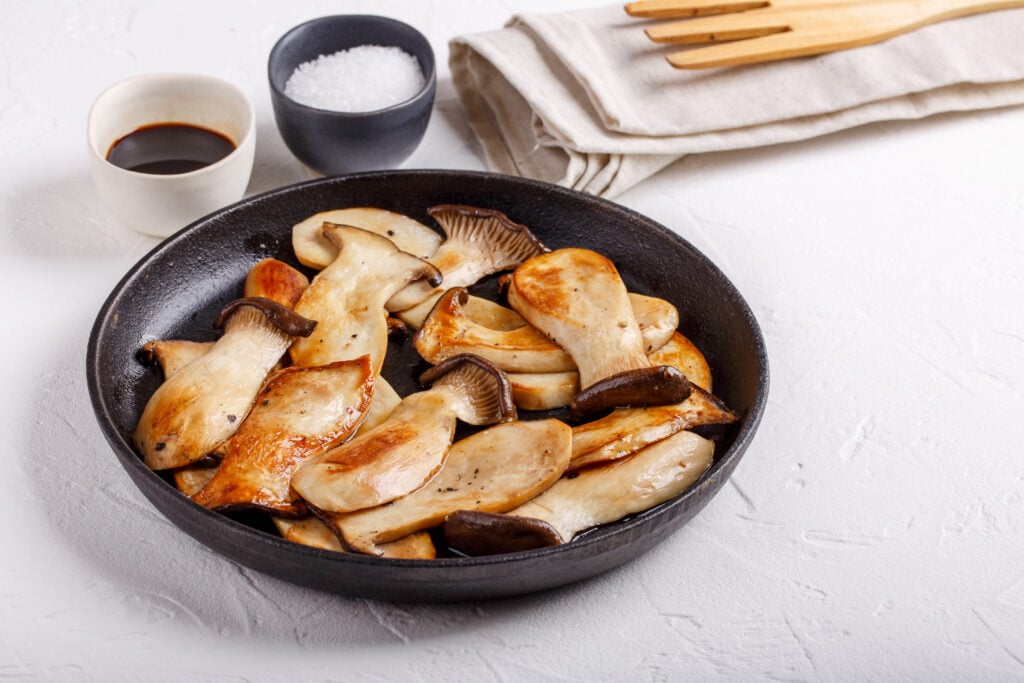 You’ll find a king oyster mushroom recipe below that not only tastes great but it also won’t take up your entire night to make.

a king mushroom is a great option for vegetarians too, because they are so big they can replace meat items in a meal and you won’t even be able to tell the difference.

Not only will you find a king trumpet mushroom recipe below but you’ll also learn exactly how to prep and store them before eating.

Exactly What Are King Oyster Mushrooms?

King oyster mushrooms are a type of mushroom that grows long and flat with a pronounced “trumpet” shape along the edges.

They have a meaty mushroom texture compared to most other mushrooms which make them a great choice for vegetarians or those looking to eat less meat.

Also, as mentioned above, they are huge so you don’t need as many as if you were cooking with smaller mushrooms.

They have a slightly sweet taste that is great for cooking but you can also eat them raw if you prefer.

It’s not as easy to find a king oyster mushroom in grocery stores so if you do see them try to grab them up before they’re gone.

You can have more luck if you search for specialized stores like health stores that have a wider variety of fresh produce.

Oyster mushrooms don’t always have to be the King variety and you’ll find them in a number of other shapes and colors like the pearl oyster, yellow oyster, blue oyster, etc.

The king oyster doesn’t grow in clusters like many of the others but they grow individually.

They are native to the Mediterranean area and are more commonly used in Asian cuisine.

King oysters have a very dense flavor that some people describe as having an umami taste.

They have a slightly earthy taste and are very savory so they make a great replacement for meat in almost any meal.

Because of their bigger size they have a meaty texture and are tougher to eat than some of the smaller mushrooms.

They will be a lot tougher than something like a portobello or a cremini.

To make them a bit softer, you can cut them into smaller pieces so they will break down more easily.

How to store and clean King Oyster Mushrooms

Like most mushrooms, you don’t want to store them in a plastic bag that cuts off all air circulation.

This can lead to rotting due to too much moisture gathering in the bag leaving your slice mushrooms soggy and ruined.

Instead, you’ll want to keep your oysters in a brown paper bag with the top folded down. This will still allow some air to seep through the bag while still providing a layer of protection for the mushrooms.

Don’t just leave them in the produce drawer either because it will still cut off too much air circulation. Instead, keep them on a shelf in the fridge.

Steps on How to Cook King Oyster Mushrooms

When you first get your king oyster mushrooms out you’ll need to give them a quick rinse under some water to get any excess dirt off.

You don’t want to soak them though because the mushrooms can get soggy and it will ruin your batch.

You can slice up your king oyster mushrooms since they will be fairly big. Many people like to cut off the stems and just use the top part for cooking.

The stems can get more rubbery compared to the head of the mushroom which is why people like it better.

Other people like to cut off the head of the mushroom and then thinly slice it to get the same mushroom effect as a cremini or portobello mushroom.

You can also just take the entire mushroom itself and thinly slice it to make some smaller pieces for your meals. 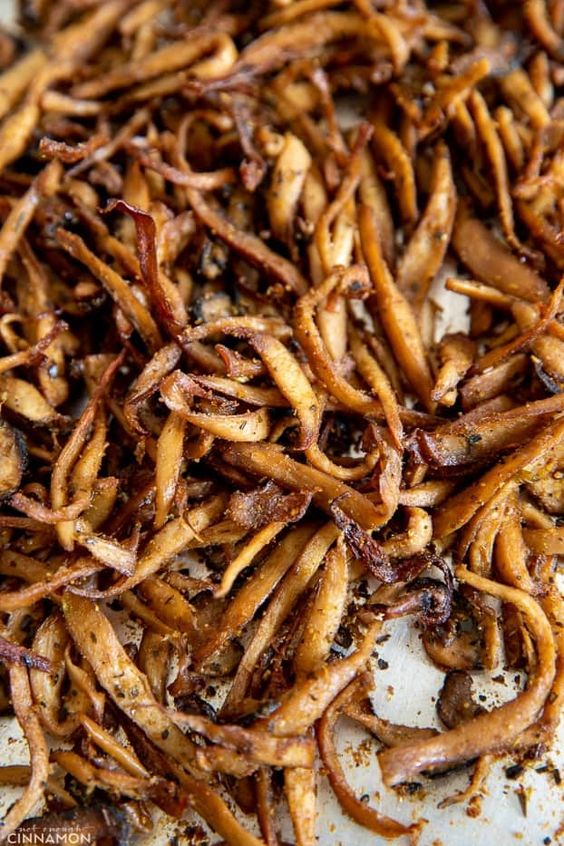 Instead of just throwing some mushrooms into your tacos like an afterthought, make the entire thin full of mushrooms.

This recipe proves you don’t even need meat at all.

In fact, it’s so good you might never think about going back to eating meat ever again.

It is super flavorful and packed with a punch that will have your mouth watering for more after each bite.

You can add any of your favorite traditional taco toppings too and it will still work just fine with the mushrooms. 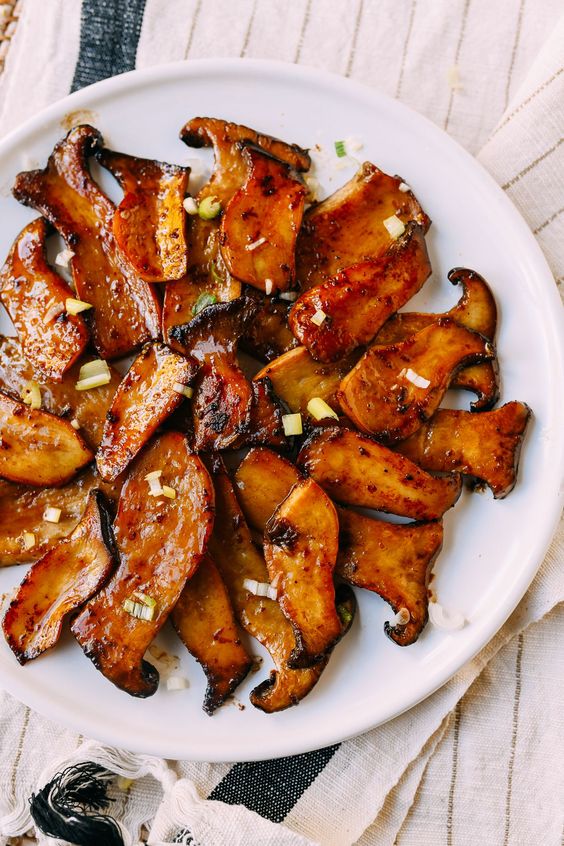 This king mushroom recipe is the perfect one to make if you like having a ton of oyster mushrooms sitting around that you can use for any meal.

You could even just keep these soy butter glazed king oysters separate and have them as a snack when the time calls.

You won’t be disappointed in this dish because the flavors are out of this world.

Soy sauce, honey, and garlic are really all you need to turn this dish into something special you can make for any occasion.

Throw these oyster mushrooms on a salad, in stir fry, or in some pasta and they will taste great.

This is the type of meal you can make a ton of to use in other meal plans you have throughout the week. 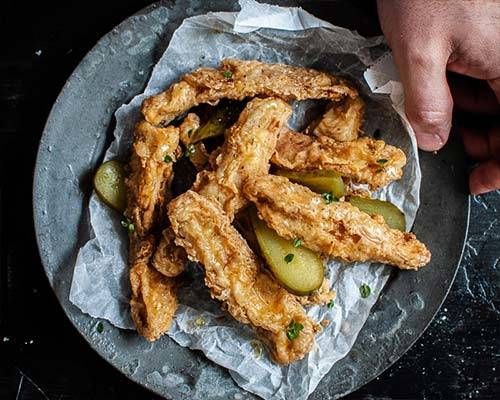 Mushrooms don’t need to be the star of the show and this sandwich proves it.

You’ll be frying up your mushrooms to go inside this delicious chicken sandwich.

This sandwich is packed full of delicious ingredients and the mushrooms only add to the beautiful balance of flavors.

It’s a great way to pretend like you’re eating chicken but in reality, you have a delicious vegetarian sandwich you can eat for any meal.

This is a great one to sneak to the kids and let them believe they are having chicken but what they are really having is so much healthier for them. 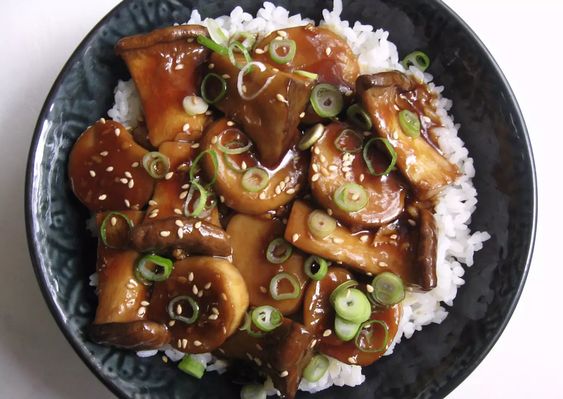 Nothing could be simpler than using your king oysters in a rice bowl because you will be able to combine all the ingredients in one pot or pan.

All you need is some white rice, soy sauce, peanut oil, and a few other spices and seasonings to make a delicious meal out of your king oysters.

You may have never thought about using your king oysters as a replacement for meat but it is the perfect way to make a meatless meal taste like one of your favorites.

It has all the texture and flavors you crave but without any greasy taste or grease that comes with cooking meat in some dishes. 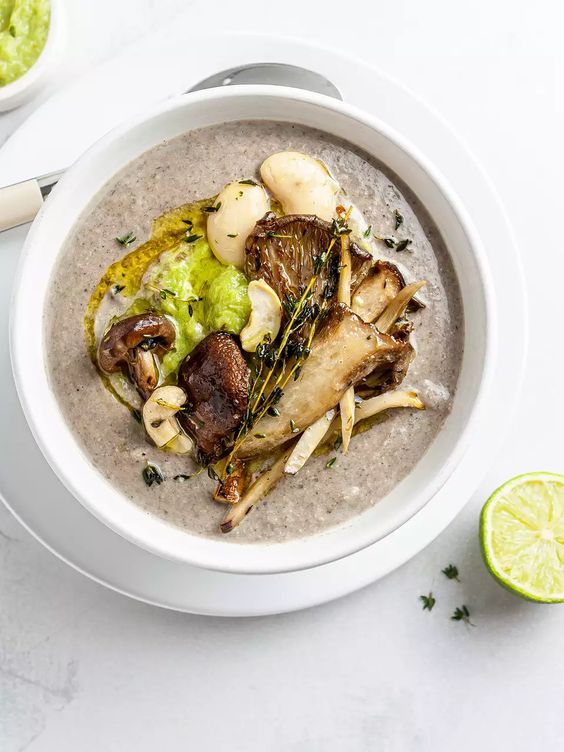 This simple, yet delicious soup is packed with the flavors you love from other soups without having to use chicken or beef bases.

You can add any veggies you like but this recipe calls for garlic, cashew nuts, shallots, leeks, and more.

The balance of flavors is going to blow your taste buds away and it’s a great dish to make a big pot full and stick the leftovers in the fridge for another time.

Get yourself a side of some high-quality bread so you can dip it into all those wonderful flavors. 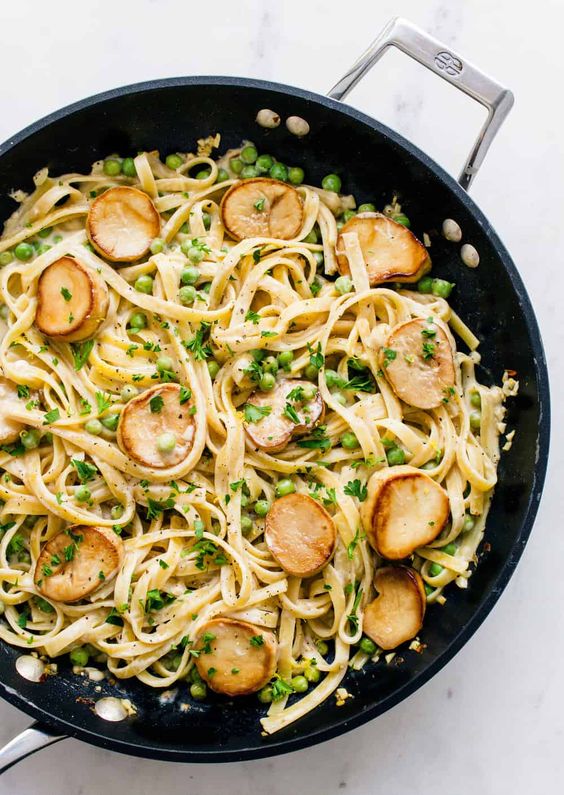 This is where your king oysters really take on the shape and taste of something different.

If you’re looking to keep your pasta dish vegetarian then sub out your scallops for king oysters in this recipe.

The creamy sauce is not only going to taste great but it will have you salivating for more when you get done with your first bite.

You can use any type of creaminess that works with your palate since there are many kinds of vegan ingredients that can give the same texture and flavor profile as non-vegan substitutes.

No matter what your diet is this pasta dish will work for everyone, even the pickiest of eaters. 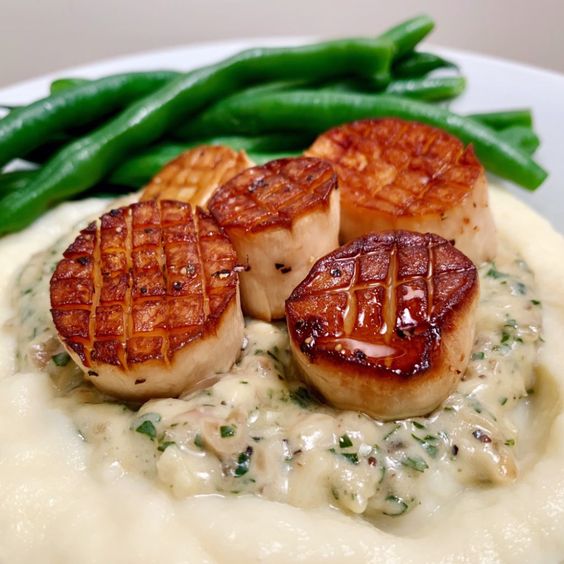 This is another scallop type recipe except you’ll use your delicious king oysters as a replacement.

These king oysters provide the same textures and flavors as scallops do but you won’t have to worry about any smells or bad taste that can come from actual seafood.

This recipe actually makes an additional sauce and some cauliflower puree to rest your scallops on.

Both additions make this dish incredibly tasty and it’s so good you might even add it to your regular rotation of meals.

You could even serve up a side of veggies to go with this wonderful meal that is sure to impress the entire family. 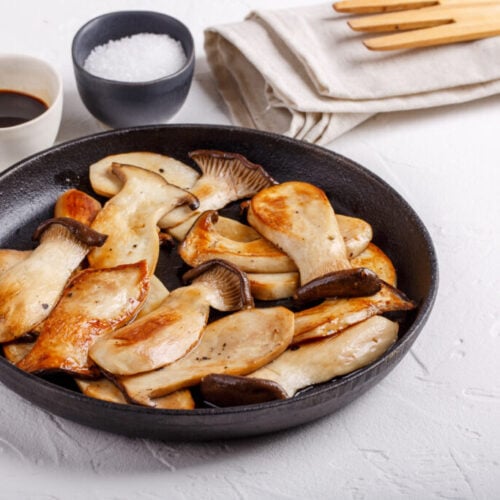 These recipes are sure to please. So, gather your family and friends and enjoy. Let us know your thoughts!
5 from 5 votes
Print Recipe Pin Recipe

Select your favorite recipe.
Organize all the required ingredients.
Enjoy the food.
Tried this recipe?Let us know how it was!