Given that they cater to the general population, it can be hard to enjoy a vegan meal at fast food spots. That being said, many of our favorite burger, burrito and breadstick providers are gradually adding menu items that cater to plant based diets.

One particular side dish you might wonder about are fries. Though you’d expect this humble potato staple to be vegan by default, some of the cooking methods used at certain establishments involve products derived from animals.

Today we’re taking a closer look at some popular restaurants, from McDonald’s and Taco Bell to Burger King and Wendy’s. Gathering all of the facts and being hungry for hours so you don’t have to, it’s time to answer one simple question: Are these fast food french fries actually vegan? 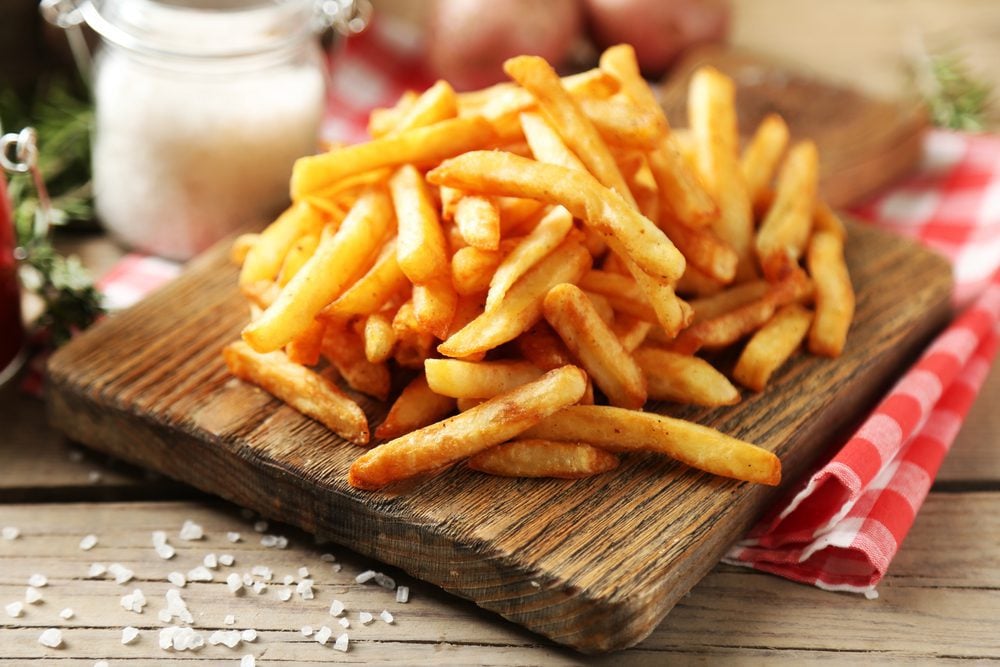 Ah, those comfortingly familiar golden arches. It might not be your first port of call for a fast food fix as a vegan, but it’s also undeniable that McDonald’s fries are some of the best. Served up salty and piping hot, they’re tall, blonde, and oh so handsome.

Unfortunately, however, those made in their US branches are not suitable for vegans. As you can see in the official ingredients and allergens section, they contain Natural Beef Flavor, which is also made using milk derivatives. Dairy AND meat!

Don’t despair - have you got plans to take a vacation any time soon? For those lucky ducks across the pond, the rules are different:According to their website, “McDonald's UK French Fries are... not coated in any fats or substances from an animal...cooked in dedicated frying vats in a blend of sunflower and rapeseed oil, which is 100 percent suitable for vegans.”

The same can also be said for the fries at McDonald’s located in Canada and Australia, too.

TLDR: Are McDonald’s fries vegan? No!

As one of the more progressive fast food options around, Taco Bell actually has its own dedicated guide to eating vegan at their restaurants. Squinting at the tiny font of the ingredients list for ten minutes before you can order is a chore of the past!

In their own words, the ‘Bell defines vegan food as “recipes that contain no animal products,” being careful to point out that they “use the same frying oil to prepare menu items,” and that it “may or may contain animal ingredients.”

As a result, they don’t recommend their fries as a definitively vegan option. You could always ask if the particular establishment you happen to be visiting cooks their fries in separate oil. It could be worth a shot - they’re seasoned perfectly!

Try not to be too downhearted, though, as they have a long list of options that are great for plant based diet followers. Just check out the menu for all of your choices - there’s bound to be something fresh and fabulous for you to enjoy.

Again, you won’t find many vegans lining up around the block to have dinner at KFC.

Should your friends or family have a hankering for the Colonel’s secret spices, your options are quite limited, unfortunately.

Given that their fries are listed across the whole site as ‘Secret Recipe’, the ingredients list is hard to track down. Once we managed to find it, we discovered that KFC fries are vegan - they do not contain any dairy or animal-based products.

It is important to note, though, that not all branches prepare their veggie and vegan friendly sides in separate fryers. We’d recommend asking about cooking methods at each individual store before you order, just in case.

Whilst we’re talking about deceitful finger lickin’ goodness - be aware! Some branches are testing Beyond Fried Chicken meat substitutes out… but they are cooked in the same oil as all of the meat. This also means it isn’t technically vegan!

In the UK, however, their tasty Quorn fillet burger (not currently available, but could see a comeback in the future) is prepared at a totally separate station, as well as fried in different oil. This ensures there is absolutely no cross-contamination.

Maybe one day our US counterparts will follow suit, but until then, stay away from Sanders unless you want to leave hungry!

TLDR: Are KFC fries vegan? Yes, but they may be prepared in contaminated oil!

Unlike their competitors at McDonald’s or KFC, the fries at Burger King are one hundred percent vegan friendly. Every single batch is prepared fresh in vegetable oil, using dedicated fryers, so you’re free to enjoy every single bite guilt-free.

Unfortunately, and in a most disappointing twist, their  Impossible Whoppers are made using 100% vegan ingredients, but their preparation method completely erases all of that hard work and research. You guessed it… they use the same grills.

Stated plain as day in the fine print of their website is a statement of explanation. In fact, “Burger King Corporation makes no claim that the IMPOSSIBLE™ WHOPPER... meets the requirements of a vegan or vegetarian diet.” Boo! 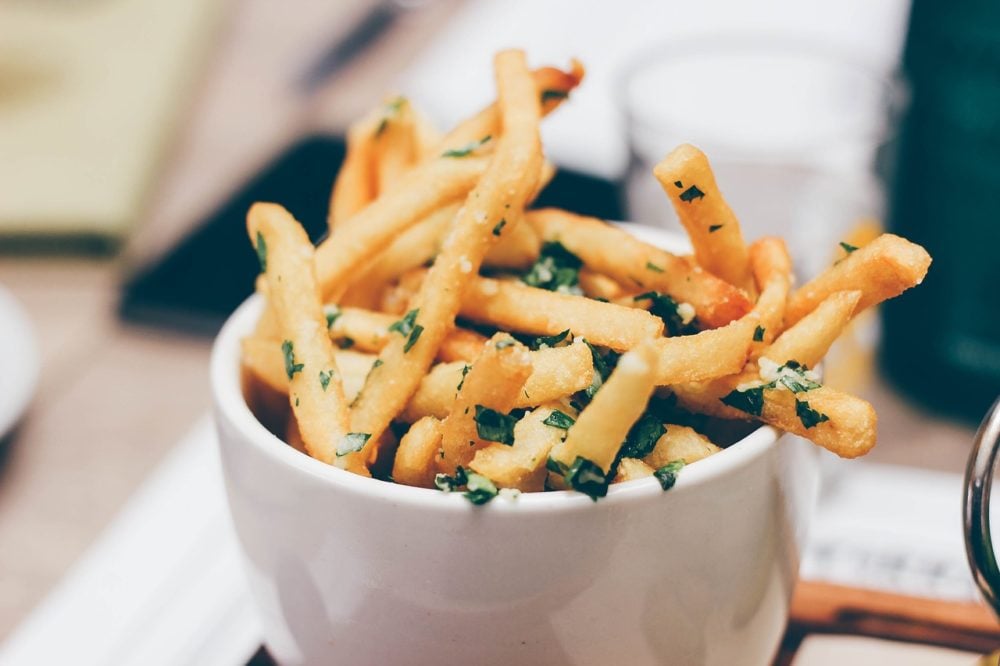 As a beloved family favorite, you may miss eating at Wendy’s now you’re vegan (unless you’ve always been!). If you fancy a nostalgic visit, rest assured that the skin on fries are amazing, and cooked in vegan oil - a perfect option!

Okay, they aren’t quite as stereotypically ‘fry-like’ as some of the more quintessential options above. However, these Seasoned Potatoes are naturally cut, and cooked to perfection, with notes of garlic and black pepper.

Be aware, though, that this and other Wendy’s options have been “cooked in the same oil as menu items that contain wheat, milk and fish.” Some vegans are comfortable with this and others aren’t - it’s totally your prerogative.

You may know this already, but Five Guys fries are known for their distinctively nutty taste, down to the 100% peanut oil they are cooked in. This is, of course, a vegan option for preparation, so you’re all covered on that front.

Whether you opt for the normal fries or have them Cajun-style (a surprisingly powerful blend of white pepper, garlic, salt, onion, paprika red pepper and other spices), rest assured you’re enjoying a completely vegan snack.

None of the other items on their menu are prepared by frying, so it’s impossible for contamination to occur by way of contact with animal byproducts. Simply seasoned and thrown in the comforting brown paper bag, they’re our favorite fries on the list.

One pleasant thing to note is that you always get way more fries than you’d expect from Five Guys, even if you order a small. Vegans on a budget can get a snack that actually fills them up and tastes good, a combination that sometimes feels rare.

Once more, we recognize the irony of covering vegan options at a restaurant that mainly offers fried chicken, but someone, somewhere wants to know. Chick Fil A is a controversial spot, but it cannot be denied that they make damn good food.

As stated on their official website, Chick-fil-a offers several vegan options, though want consumers to know that they “do not designate vegetarian-only preparation surfaces,” which is important for more vigilant eaters to bear in mind.

Those who are a fan of their crowd favorite, the Waffle Potato Fries, will be thrilled to know that they are vegan from crispy exterior to fluffy interior. Cooked fresh in canola oil, made solely from potatoes and sea salt, they are a slice of plant based heaved.

Sadly, Popeyes has not joined their competitors in catering to vegetarians and vegans. Not even a little bit… not even at all! It’s suggested that each of their menu items has been fried in lard or beef tallow, which are of course derived from animals.

Unfortunately, in an attempt to create an air of mystery around their secret recipes, much of the ingredients list is hard to find. Once it is located, they suggest that fries and cajun fries contain ‘cholesterol’, which cannot be derived from plants.

According to their support section, the only options on the menu that can be considered vegetarian (so not even dairy free) are the rice, coleslaw and mashed potatoes. Even then, you have to miss out on any gravy, so what’s the point?

TLDR: Are Popeyes fries vegan? No!

According to their easily accessible nutritional and allergen information, In-N-Out fries are totally vegan friendly. Made fresh and prepared using 100% sunflower oil and the finest potatoes around, there are no animal products to be found here.

As that handy list explains, they are totally free from soy, shellfish, milk/milk byproducts, eggs, peanuts, tree nuts and gluten. Therefore, these fries are easily identified as entirely plant based.

Given that’s all you’ll be able to enjoy from the menu, it’s a good job they’re notorious for being delicious. We’d stick to restaurants that better cater to your needs if it’s your choice; if not, don’t go on an empty stomach.