We can now see some famous fast-food restaurants start to adapt to their vegan customers. Firstly, it’s about time that they started to cater to the vegan community and offer vegan food and vegetarian food.

Especially as the latest national poll carried out by The Vegetarian Resource Group stated that in 2016, 3.7 million adults in the USA were vegan.

This poll is conducted every five years so we would only expect it to have grown by a large proportion by now. 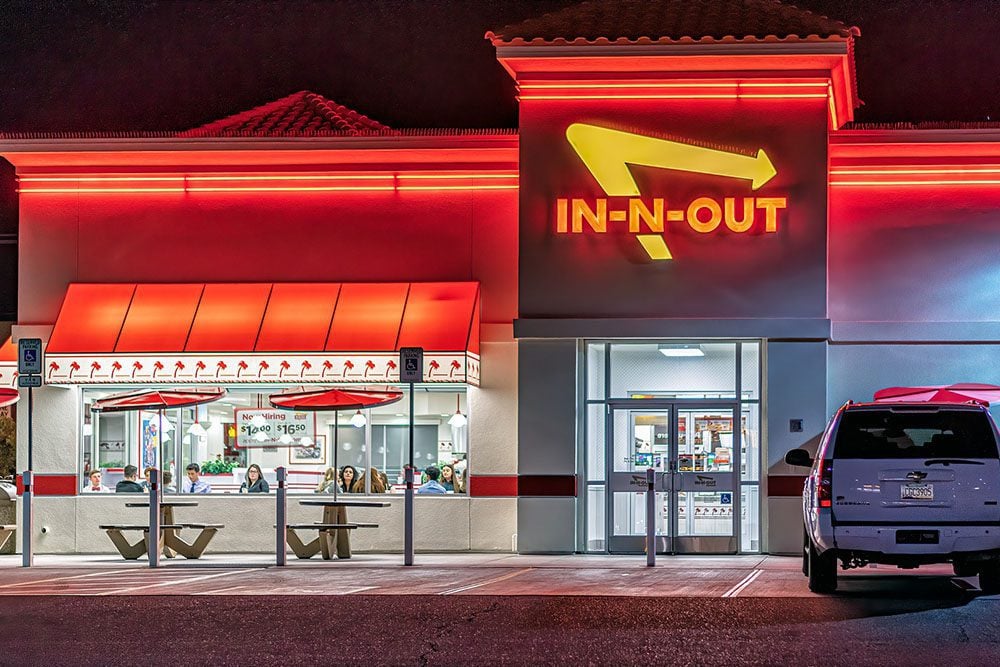 Plant-based diets are much more popular than they once were. Not only is there a huge list of health benefits but it also positively impacts the environment.

We love that! If you follow the vegan way of life, you may find it difficult to eat out sometimes. If you are the only vegan in your family or friendship group, it is hard to pick a restaurant that caters to all diets.

In-N-Out Burger is a fast food chain that has been around in the States for almost 73 years. That’s a long time to be serving up burgers!

They currently have 358 restaurants in the country, mainly around California and the Southwest. You will be so happy to know that there are some vegan options at this restaurant. However, they are limited so don’t get too excited just yet!

We’re going to kick things off with one of the most substantial things on the menu. However, this veggie burger is lacking some vital ingredients which may make you think twice before ordering.

Let’s start by saying that there is no official veggie burger or vegan burger available on the In-N-Out menu.

This is so disappointing as other restaurants at least have one option which is suitable for vegans.

To order yourself a veggie burger and make it vegan friendly, this is what you’re going to want to do. Order a hamburger, ask for the beef burger patty and the sauce to be removed.

This leaves you with the toasted bun, lettuce, tomato, and grilled onion. It does sound rather basic but there are some things you can do to make it a little more interesting.

Treat yourself by adding any of the following toppings to your burger: ketchup, mustard, or yellow chilies. Hopefully, In-N-Out Burger will be able to source meat alternatives sooner rather than later.

The next item on the In-N-Out Burger menu which you can enjoy knowing that it is completely vegan is the majority of the sodas. In-N-Out offers the Coca-Cola brand which is suitable for vegans.

One drink to avoid is 7Up soda. 7Up is produced by Pepsi and actually contains animal products.

Pepsi refuses to name the specific animal product used in the production of its sodas. This does seem odd to a lot of its consumers but Pepsi stands firm on this matter.

We saved the best option until last because we know how to treat you right! The third vegan option that you can choose to order at In-N-Out Burger is the fries.

Fries from fast food restaurants are often deemed not suitable for vegans due to cross-contamination. Fear not, In-N-Out cooks the French fry completely separate from any of its other items.

Pair your fries with some ketchup and you have a match made in heaven! Just watch out for the animal style fries.

In-N-Out Burger has been around for a long time but it needs to catch up with the times and offer a vegetarian option veggie patty.

Veganism is a popular way of life and only offering three suitable items on its menu is just not good enough.

Especially when one of the options is a standard soda. We have seen other fast-food restaurants adapt with the times and provide good meat substitutes for their vegan customers.