You may be a vegan that still loves their burgers and fries, and will search far and wide for the best vegan burgers on the market. If you have ever wanted to try visiting the most popular burger joints in town, but you are unsure what vegan options there are, we are here to help.

Have you ever wondered whether you would be able to visit Five Guys Burger and Fries and still be able to stick to your vegan lifestyle? We have the answer for you. Yes!

Five Guys Burgers and Fries is an American fast food restaurant chain that mainly makes burgers, hot dogs and french fries. But they are not just any old fries, Five Guys make their own, freshly cut potatoes that are then cooked in 100% peanut oil for a tasty flavor.

With so many delicious pictures of crispy fries all around the restaurant, you may wonder what meals you can safely eat at Five Guys, and which options are suitable for a vegan. 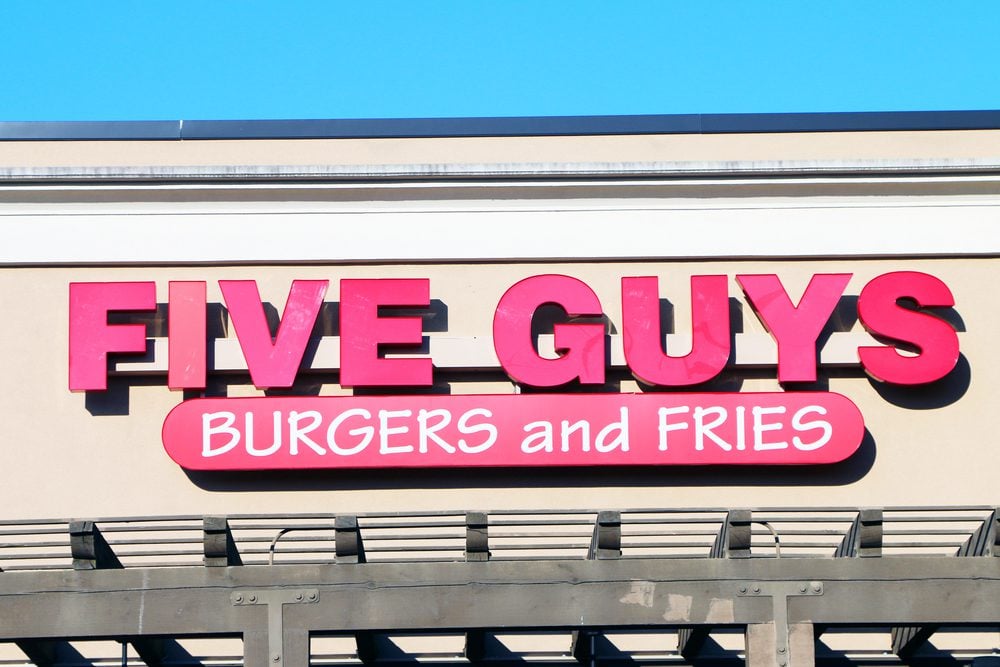 What are the vegan options at Five Guys Burgers and Fries?

Despite there being over 1,500 Five Guys Burgers and Fries locations all across the globe, there are actually only three vegan options available. However, these options are not widely visible on the menu, and there are no vegan burger options either.

As mentioned, Five Guys Burgers and Fries make their own fresh cut potatoes that are cooked in 100% peanut oil and nothing else. This means that the only two ingredients in the Five Guys French Fries are just potatoes and peanut oil, making them the perfect option for a vegan diet.

The french fries are only flavored with salt, and there are no additional flavorings or ingredients included, making them completely vegan friendly. In addition, the french fries are the only items on the menu that are fried, so you do not have to be worried about cross contamination.

What is even better is that you can also eat the Cajun Style Fries from Five Guys, as they are 100% vegan, too! These fries are made in the same way as the standard french fries from Five Guys, just with added seasoning. These ingredients include garlic, salt, onion, paprika, white pepper, red pepper and oregano, making them very vegan friendly.

However, there are no burger or hot dog options available for vegans, but do not despair, there are many sauces available for your fries that are also vegan friendly! These sauces include BBQ sauce, hot sauce, ketchup, mustard, relish, and the A1 original steak sauce to add to your tasty fries.

You can also enjoy the free peanuts from Five Guys that are complementary for all paying customers, which are additionally vegan friendly.

Can I eat the veggie sandwich at Five Guys Burgers and Fries?

There is a silver lining, as you can ask for the Veggie Sandwich to be made wrapped in lettuce instead of with a bun to make it a vegan option that is suitable for you. Once you pair this option with their delicious french fries and tasty sauces, you can enjoy a filling and flavorful meal from the Five Guys Burgers and Fries chain guilt free.

It is important to note that any ingredients, such as grilled onions or tomatoes will be cooked on the same grill as many non vegan food items, as they will be placed on the same grill next to burgers and other meats. This runs the risk of cross contaminating your food, or having it come into contact with animal products or non vegan dishes.

In summary, there are only three vegan options available at Five Guys Burgers and Fries restaurants. These are the regular French Fries, the Cajun Fries and the sauces. In addition, you can actually enjoy the peanuts at Five Guys for free, and they are vegan!

You may also be able to eat the Veggie Sandwich from Five Guys, as it is made with tomatoes, mushrooms, onions, peppers and lettuce. You will have to remember to order it with a lettuce bun rather than a bread bun, as these can contain dairy products.

However, it is best to ask your server whether any of the ingredients of your food will come into contact with any meat products, or they could contaminate your food. As a general rule, you should always ask your server if the food is suitable for a vegan diet, as some people can often accidentally cross contaminate food, or serve non vegan options to a vegan by accident.

To keep things on the safe side, you are best off just sticking to the fries, they taste amazing, are beautifully made, and completely vegan!