Paprika is a type of ground spice that comes from the plant Capsicum annum. The sweeter red peppers are dried and ground to create this spice. You can have Hungarian paprika and Spanish paprika too. I prefer a spicy paprika in my recipes.

These peppers are native to Central Mexico and North America and were taken to Portugal and Spain in the 16th century.

Paprika is primarily used as a colorant and seasoning in a lot of savory dishes. It is commonly found sprinkled on top of hummus and deviled eggs. 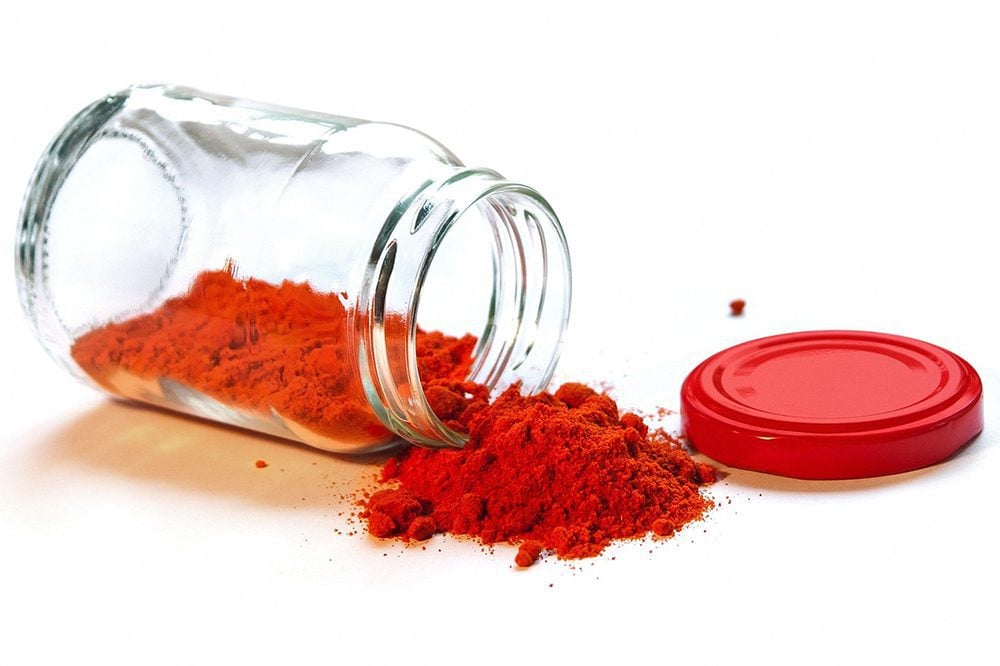 It is a vital ingredient in Spanish chorizo. In Hungary, there is a sauce known as paprikash, a kind of paprika gravy.

Paprika primarily releases the colors and flavors when heated, and as such is commonly used in cooked dishes. It does not add much flavor to the meal.

What do you do if your recipe is calling for paprika and you don’t have any in your store cupboard? We have rounded up 11 of the best paprika substitutes to use for you, so there’s no need to worry!

One of the main benefits of using tomato juice is that it replicates the color paprika would have given.

Combining this with chili powder gives a slight edge and smokiness to the flavor profile, making it closer to paprika.

For every teaspoon of paprika, your recipe calls for, we recommend substituting 1 teaspoon of tomato juice combined with a large pinch of chili powder.

Black pepper is native to India but is produced the world over. It is a staple household seasoning and you would be hard-pressed to find a home that doesn’t have any.

This substitution will not add any color to your dish, so should not be used if that is important. This will provide a level of spice to your dish.

For every teaspoon of paprika, your recipe calls for, we recommend substituting 1 teaspoon of cracked black or white pepper.

These flakes are made from a mixture of peppers from the Capsicum annum family. They are primarily made from cayenne peppers with a few others incorporated to bulk it out.

These are primarily incorporated into dishes to add spice. The peppers are dried and then ground before being packaged.

For every teaspoon of paprika, your recipe calls for, we recommend substituting ⅓ to 1 teaspoon of red pepper flakes.

This is a type of smoked paprika that comes exclusively from the La Vera valley in Cáceres, Spain. It has been made here since the 16th century.

There are 3 varieties: dulce, agridulce, and picante. These mean sweet, medium, and hot. The hot type is primarily used in heartier meals and chorizo.

Peppers are hung out to dry on strings once harvested. They then undergo 2 weeks of oak wood smoking. This makes the color more vibrant and the flavors stronger.

For every teaspoon of paprika, your recipe calls for, we recommend substituting 1 teaspoon of Pimenton de la Vera powder.

Cajun spice, or cajun seasoning, is a blend of many different spices. It works with almost every dish and it’s a great blend to have in your kitchen cupboard.

You can buy it ready made, or make your own following the recipe below. The beauty of making it yourself is that you can customize it to suit your personal taste.

The ingredients you will need are: paprika, fine salt, garlic powder, ground black pepper, ground white pepper, onion powder, cayenne powder, dried oregano, and dried thyme. The quantities vary depending on how much you wish to make.

For every teaspoon of paprika, your recipe calls for, we recommend substituting 1 teaspoon of the cajun spice blend.

Hot sauce is an umbrella term for a type of sauce made primarily from chilies.

One of the first commercially available hot sauces in the United States was made in Massachusetts in 1807. Tabasco hot sauce has been available since 1868!

Any kind of hot sauce can be substituted for paprika when the taste is more important than the color.

For every teaspoon of paprika, your recipe calls for, we recommend substituting 1 teaspoon of hot sauce.

This is a powdered form of dried chipotle chiles. It differs from generic chilli powder as this tends to have other spices, such as cumin, oregano, and garlic powder incorporated.

Chipotle chiles have a medium spice level and a smoky element. It has a distinctive earthy and sweet flavor. It works fantastically as a substitute for smoked paprika.

If there is a dish you wish would be a little more sweet than hot, consider switching out the sweet paprika for chipotle powder.

For every teaspoon of paprika, your recipe calls for, we recommend substituting 1 teaspoon chipotle powder.

This pepper originally hails from Syria, but nowadays it is more commonly produced in Turkey. Halaby peppers are picked when ripe and then semi-dried.

These peppers are then seeded and ground to form a powder.

It is mildly spicy, falling somewhere in between cayenne pepper and paprika. The amount you choose to substitute depends on your spice tolerance.

For every teaspoon of paprika, your recipe calls for, we recommend substituting anywhere between ½ and 1 teaspoon of ground Aleppo pepper.

Not all chili powders are the same. Chili powder is a blend of spices, and the ingredients and quantities can vary between manufacturers.

As with cajun spice, this can be made at home too, so you can have a carefully curated flavor profile.

A good base recipe for your homemade chili powder is as follows.

This can be stored in an airtight container for up to 1 year.

For every teaspoon of paprika, your recipe calls for, we recommend substituting 1 teaspoon of chili powder.

Cayenne pepper is a spicy chili pepper that is added for additional flavor. This is much stronger than the flavor found in paprika and so you need to use less of it when substituting.

Some people like to add a sweetening agent such as honey or sugar as paprika has a sweet flavor. If the heat is still too much, we recommend adding cream, broth, or salt to make it milder.

For every teaspoon of paprika, your recipe calls for, we recommend substituting ⅓ or ½ a teaspoon of ground cayenne pepper.

This is a way to make paprika for yourself at home. You should get some red bell peppers that have been allowed to fully ripen. Pull the stems off and place the pepper in a dehydrator until brittle.

If you do not have a dehydrator, preheat your oven to 120 degrees Fahrenheit.

Slice your peppers finely and place them on a lined baking sheet in the oven to dry out.

Break the dried peppers up into small pieces. Run these through a mill grinder and sieve whatever comes out. Store in an airtight container for up to 1 year.

This will have a much more interesting flavor profile than store bought paprika.

For every teaspoon of paprika, your recipe calls for, we recommend substituting 2 teaspoons of bell pepper powder.

Can I use cumin instead of paprika?

Yes, you can use cumin instead of paprika in recipes but be warned as it will add more heat to the dish than paprika would.

Cumin has a slightly more yellow-brown coloring than paprika does, so if you were hoping to achieve the brick red coloring that paprika brings to a recipe then you won’t get that from cumin. Cumin is not as smoky as paprika but instead has an earthy flavor with both notes of bitterness and sweetness when added to particular dishes.

If you’re going to use cumin as a replacement for paprika in a recipe then you’ll want to use half the amount that is recommended otherwise the heat will overpower the dish. You could also add some cayenne pepper with cumin if you’re going to use it as a substitute for paprika as the cayenne will bring the brick red coloring - but be careful as cayenne pepper can be very hot so you’ll want to add it sparingly.

Can I substitute turmeric for paprika?

Yes, you can substitute turmeric for paprika in recipes but the flavor may be slightly different, if you want to achieve a more similar flavoring then you may need to add some additional ingredients to replicate the smokiness that paprika brings.

Turmeric is very earthy and bitter and will change the dimension of your dish and is often used in Indian dishes paired with other spices like cinnamon and ginger. Paprika is very popular in Mexican food as it brings both smokiness and heat to sauces and meats.

So if you want to use turmeric in a recipe instead of paprika, then we recommend using cayenne pepper, chili powder to achieve a more similar flavor, however, if you’re not too bothered about replicating the spicy kick that paprika brings then turmeric will bring a good taste to a recipe.

Turmeric has a very identifiable color which can often change the look of a recipe, if you still want to get the red tones of paprika you may want to use some chili powder of cayenne pepper to get that rich red coloring.

Can I make my own Paprika?

You can choose to dry your peppers out in a dry place for around a year or you can use a food dehydrator to speed up the process. To create smoked paprika, put your peppers in a smoker with oak wood until they’ve completely dried out.

Once your peppers are dry, break them into smaller pieces so that they’ll fit in your food grinder processor. If you’re using chili peppers then you can include however many seeds you like depending on how much you like spice.

Then grind your peppers until they’ve become a fine powder, sifting through occasionally to make sure everything has blended. Then store it in a jar in a cool dry place.

Can I use red chili powder instead of paprika?

Yes, red chili powder is a great substitute for paprika in recipes as it has similar flavoring and also produces that same red coloring.

Chili powder is a lot hotter than paprika though and is often less smoky, so if you are going to use it as a substitute you may want to use a lower ratio of chili powder that you would use for paprika.

If you realize midway through cooking that you have run out of paprika, there is no need to worry any more. Any of these options we have listed will work well as a substitute.

Pay attention to the dominant flavors in the dish you are making, as different substitutes will lend different flavors.

It is almost guaranteed that you will have one of the alternatives on hand, and it could be fun to play around with ingredients and flavor profiles.

You never know, you might actually prefer the dish with the substitution you have made!