It’s quite possible you’ve eaten fish sauce before without even knowing it; it’s a staple ingredient in Southeast Asian cuisine, giving such meals as Pad Thai and Larb an incendiary synergy of sweet and salty brilliance that you’ll not soon forget.

A taste sensation this dynamic and tastebud tingling should be enjoyed by absolutely everyone, but it’s not always possible. 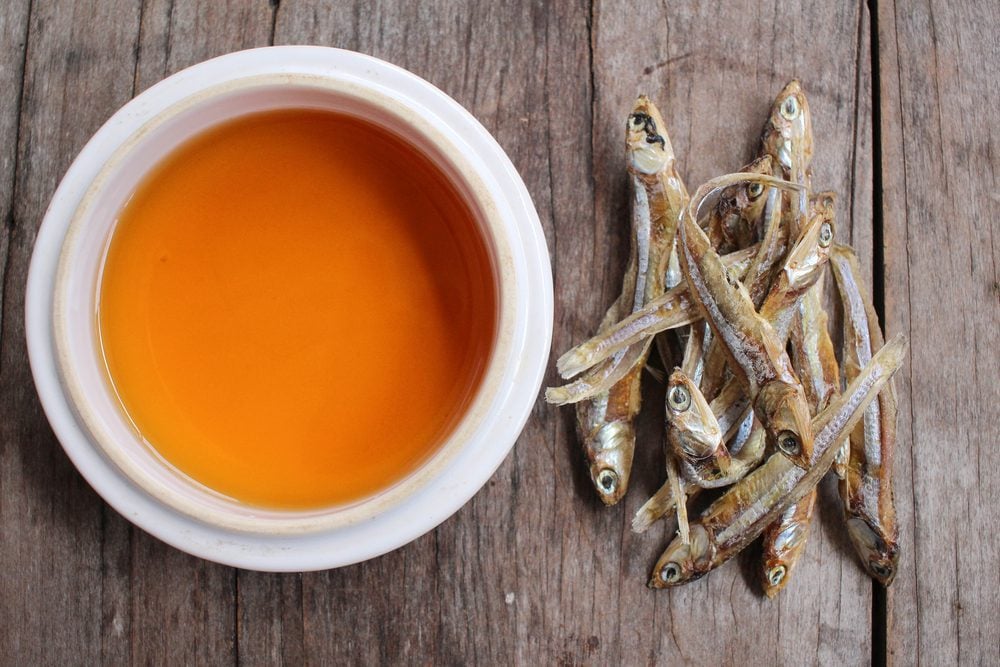 Fish sauce isn’t just a blend of ingredients that really make fish pop. It’s not like tartar or hot sauce.

It’s called fish sauce because the sauce itself is actually made out of fermented shellfish, anchovies, or other small ocean dwellers, so it’s not suitable for vegan or vegetarian diets.

Nor is it an option for the possible 2.5% of the population with a shellfish allergy.

But in the spirit of equality for all tongues and tums, we’re giving you three awesome substitutes for this powerful concoction, so no one goes wanting.

Making Your Own ‘Sort of’ Fish Sauce (Not vegan or Vegetarian)

Before we get to the really adventurous stuff, let’s discuss how you can whip up something akin to fish sauce, or Nam Pla, as it’s often known, for those of you who can eat fish, yet don’t have any official fish sauce to hand.

As long as you have a tin of anchovies lingering somewhere in the depths of your cupboards and a splash of dark soy sauce, we have great news. You can have a go at mixing this impromptu sauce.

Soy sauce is famous for its umami flavorings and brings just enough saltiness to the equation to replicate that fishy delight. All you need to do is chop your anchovies as finely as you can, mix them together, and voila!.

Using the ratio of one anchovy fillet for every tablespoon of soy sauce, you should be able to replicate, if only to a minor degree, the essence of traditional fish sauce.

It can be tempting to empty torrents of the stuff out onto your food. It really tastes that good. But there is a limit to the amount of soy sauce you should use that, if exceeded, will completely ruin your meal.

Pssst...want to know a secret to take your homemade fish sauce to the next level? Mix in a little of the brine from your anchovy tin to really set things off!

You can use either of these soy sauces to attain a certain degree of likeness to fish sauce. Thai white soy sauce, known in Thailand as See Ew Cow, is designed to work well with most Thai food, so you really can’t go wrong. It’s savory and sweet and roundabout the same color as fish sauce.

Japanese white soy sauce has a similar if not increased salt content, but it’s not quite as sweet, which may appeal more to your taste buds or be more suitable for the meal you’re preparing.

It’s also a fair amount brinier than Thai soy sauce, which helps it to mimic the fermented aspect of fish sauce.

You can also spice up your faux fish sauce by adding some paprika, chili powder, garlic powder, onion powder, coriander, or celery salt, and if you’ve really got a hankering for the real deal, mix some fermented tofu in with your veggies and drizzle your sauce over the top.

How Much White Soy Sauce is Too Much?

Although it’s far thinner and more refreshing than dark soy sauce, white (light/thin) soy sauce actually has a higher sodium content, so it makes sense to go easy when pouring on your food or dipping your food in it.

Pssst...it’s secret time again. Soy sauce is all well and good and holy cow is it delicious, but it doesn’t really have any fishy qualities.

Just because you’re fighting the good fight and saving all the animals (keep up the good work) doesn’t mean you have to totally give up fishy flavors.

You can finely chop dried seaweed or kelp flakes and stir them into your light white soy sauce to imbue it with the essence of the ocean. A spill of lemon juice will also help punch up the pelagic flavors a bit.

You might also consider a very small amount of dill or tarragon, or if you’re craving that sourness associated with fish sauce, a teaspoon of rice wine vinegar should do the trick. Failing that, why not drizzle in a bit of pickle juice from your gherkin jar.

I’d also like to mention at this juncture that you can now buy vegan fish sauce! That’s right! Your eyes do not deceive you; you read that correctly.

A brand called Thai Taste has cracked the code and has created a fish sauce that isn’t haunted by the ghosts of a million poor tiny fish. Yay!

The important thing in this situation is that it tastes good in a fishy sort of way, and it really, really does.

It’s no surprise this is a great substitute for fish sauce as it exhibits an uncanny symmetry to the Thai favorite in terms of ingredients.

One of the most commonly used fish in Nam Pla is anchovies, and one of the most prominent components of Worcestershire sauce is...you’ve guessed it, anchovies.

It also contains tamarind, a naturally sweet and sour tropical fruit native to Africa that evokes some of the flavors of the fermenting process used to gently break down the fish.

They were indeed experimenting with vinegar-based sauces in order to make something exciting and new, but the sauce they concocted didn’t taste very good at all.

Feeling somewhat defeated, they left this batch in a basement where it began to ferment. To their surprise, when they rediscovered their mixture, it had exactly the sort of flavor they were looking for.

How Much Should You Use?

You do have to be a little bit cautious with Worcestershire sauce as adding too much to a meal can cause a light burning irritation in the back of your mouth and start of your throat.

If you want your food swimming in sauce, you should consider diluting it with a few drops of water or perhaps even a minuscule amount of rice wine vinegar or cider vinegar.

Pssst...I can’t stop myself, I have to tell you another secret. Not only can you buy vegan Worcestershire sauce from the store or online, but you can also rustle up a totally vegan homemade version with common ingredients.

For roughly a cup and a half of sauce mix...

Can I leave fish sauce out of a recipe?

Yes, it is possible to leave fish sauce out of a recipe without selecting a replacement. Although it adds flavor to Southeast Asian dishes, for many dishes it isn’t a key ingredient but something that is used to enhance how it tastes.

Of course, there are some recipes where the lack of this ingredient will be more noticeable than in others leaving the dish with a slightly bland flavor.

If you don’t want to compromise on the taste of your dish, then it is worth keeping the fish sauce in the recipe or at least sourcing an alternative that isn’t going to alter the taste too drastically.

This is because, in some Thai and Asian dishes, fish sauce is the base ingredient that provides the flavor to the rest of the dish. Without adding it isn’t going to have as much of a kick.

Can I substitute fish sauce for Worcestershire sauce?

As fish sauce and Worcestershire sauce are both made from fermented anchovies they are very similar tasting which makes them worthy substitutes for one another.

It is also worth noting that it has a slightly thicker texture to fish sauce but it can still be added to the recipe in an equal ratio.

As both sauces differ slightly regarding how they taste, it is worth considering whether this is going to impact the overall flavor of your dish.

Can I use hoisin sauce instead of fish sauce?

Fish sauce has a salty but sweet taste. Similarly, hoisin sauce has a sweet and salty flavor although it has hints of a barbecue flavor.

Sometimes, both are used as substitutes for one another, however, fish sauce doesn’t quite share the same sweetness as hoisin sauce and so in some recipes, this added sweetness may be more noticeable than expected.

If the slightly different taste of hoisin sauce isn’t going to complement your recipe, other alternatives can be used. Soy sauce is considered to be one of the best replacements for fish sauce.

It can be swapped out in equal amounts, although you may wish to add some other ingredients to enhance the flavor of soy sauce so that it bears a closer resemblance to the taste of fish sauce.

What is fish sauce made from?

Fish sauce is an ingredient that is used in many Thai and Asian dishes. It is made from a mixture of fish (typically anchovies), salt, and water which has then been fermented for a couple of months to 2 years.

As implied by its name, fish sauce has a fishy taste but it is also slightly salty with a touch of sweetness. Despite anchovies being the most commonly used fish to create this sauce, on occasions, it may be made from mackerel or shrimp. To create the sweet flavoring, it is sometimes complemented with caramel or fried rice.

To make the fish sauce, the anchovies are put into a large barrel and then left to hang out. As the bacterias begin to break down the fish a briny, savory liquid is produced which we know as fish sauce.

Although the fish flavor of this sauce is only slightly noticeable when used in moderate amounts, if it is excessively used in dishes then the flavor is going to become much more apparent.

See, there's absolutely no reason why anyone has to go without the culinary wonder that is fish sauce. A fish sauce substitute is available.

Oyster sauce is an option as is hoisin sauce, a soy sauce substitute, curry paste, shrimp paste, and umami flavor. A vegetarian substitute would be dried shiitake mushrooms or mushroom soy sauce. These would also work for a vegan fish sauce substitute.

All it takes is a few quick internet searches, a pinch of imagination, and a teaspoon of get-up-and-go, and you can send your taste buds to heaven whenever you like.