Grenadine syrup is a commonly used, non-alcoholic bar syrup traditionally made of pomegranates and is often used to make a variety of cocktails, such as Sea Breeze, Tequila Sunrise, and many other delicious cocktail and mocktail recipes you want to add a splash of color to.

Believe it or not, it's difficult to trace when grenadine first started appearing in cocktail recipes. The first similar sweet red syrup was mentioned in an 1862 bartender's guide by Jerry Thomas. This recipe book has several recipes that call for either strawberry syrup or raspberry syrup. Several other cocktails call for cherry juice and juice from white currants.

Then, in 1930, a recipe book listed about 100 cocktails that called for grenadine, and many of them listed raspberry syrup as a possible alternative. What about before that? The first one we are aware of was in a cocktail recipe book from 1895.

Grenadine syrup is red in color and is characterized by its sweet and tart taste that comes from refreshing pomegranate juice.

Grenadine syrup is prepared by reducing a blend of pomegranate juice, sugar, and juice from either a lemon or orange until your mixture becomes a thick, syrupy consistency.

Whether you’re hosting a cocktail party or just fancy a mocktail on a hot summer’s day, grenadine syrup is an essential ingredient to have at your disposal!

However, if you find that you’re without it, what can be used as an appropriate substitute for grenadine syrup?

We’ve compiled a list of 6 of the most popular substitutes for grenadine syrup, so you don’t have to fret next time you go to make a drink and the cupboard is dry!

Check out our favorite substitutes for grenadine below! 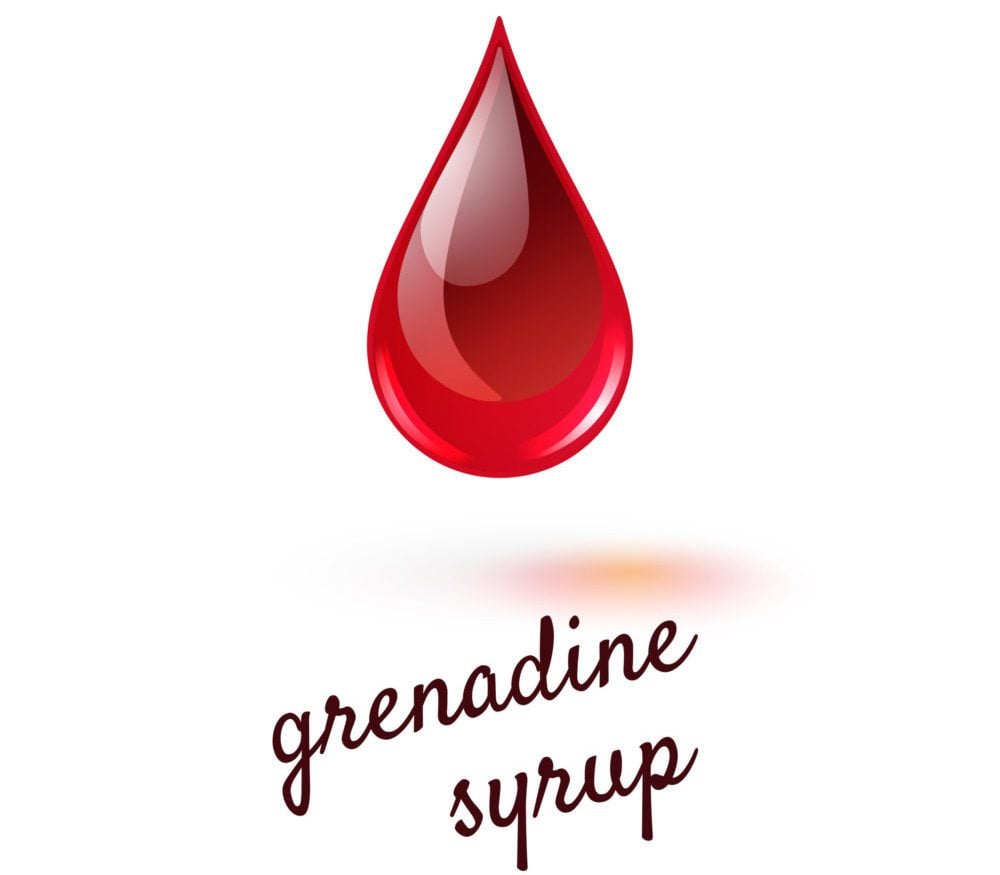 Believe it or not, grenadine syrup is fairly simple to make at home with ingredients you’re likely to have anyway, and is the closest alternative you’ll get to the taste of store-bought grenadine.

Homemade grenadine syrup is also a great option if you’re conscious about the additives in store-bought syrups.

Simply place the pomegranate juice, sugar, and lemon juice in a pan and combine on a low heat being careful to stir the mixture constantly as it heats.

Once combined, slowly bring the pan to a boil, still being cautious to stir the mixture constantly whilst the sugar dissolves.

Once the sugar has dissolved, reduce the heat and place a lid on the pan, and simmer the mixture for 15 to 20 minutes, or until it looks thicker in consistency.

You want to reduce the mixture by about half of the original volume. Tip: it’s important to remember that syrup thickens as it cools, so don’t worry if your mixture still looks thinner than you expect after 20 minutes of simmering.

Allow your mixture to cool before transferring it to a bottle with a tightly sealed lid. Store your homemade grenadine in the fridge for up to 3 weeks!

Voilà! You can use your homemade grenadine syrup to make delicious cocktails and mocktails. It really couldn’t be more simple!

If you don’t want to make your own grenadine at home, then pomegranate molasses is an excellent substitute for grenadine syrup.

Pomegranate molasses has a sweet and tangy taste that goes brilliantly in cocktails.

Some people even prefer to make their own pomegranate molasses, as store-bought molasses can be more bitter than grenadine syrup tends to be, so you can adjust the ingredients and sugar according to your own taste.

If you don’t have any to hand or you simply want to try making your own, you can easily make pomegranate molasses by simply boiling a cup of pomegranate juice, a cup of sugar, and a squeeze of lemon juice for over an hour or until it becomes a thick, syrupy consistency that looks similar to grenadine syrup.

Raspberry syrup is another close alternative to grenadine syrup.

This gloriously sweet and tangy syrup will bring a splash of color to any cocktail that you make and is a perfect alternative if you don’t have grenadine syrup in your cupboard.

Just add the same amount of raspberry syrup as the recipe calls for grenadine!

For an alcoholic-free drink, you could also use this versatile syrup to make a virgin raspberry mojito, a raspberry lemonade fizz, or another mocktail of your choice!

You can even add raspberry syrup to homemade desserts. The options are endless.

If you’re looking for a sharp, tangy alternative to grenadine syrup, cranberry juice cocktail concentrate is for you!

Cranberry cocktail concentrate has everything that a grenadine syrup has and more! Sweetness, tartness, red color, and thick consistency that you’ll hardly be able to tell apart from grenadine syrup.

This cocktail concentrate combines the refreshing taste of cranberry juice with the sweet blend of apple and pear that beautifully lifts the flavor. What’s not to love about this alternative?

If you’re looking for a bitter alternative to grenadine syrup, unsweetened pomegranate juice will do the trick just fine!

This substitute is the best for those who are trying to reduce their sugar intake or for individuals that find grenadine syrup to be sweet and sickly, as it provides the right amount of flavor and tang without being too sweet.

However, that being said, this alternative won’t necessarily imitate grenadine syrup as well as some of our other suggested alternatives will. If you want a closer alternative for your cocktails, then you’ll need to add the sweetness.

Cocktail cherry juice is another great substitute for grenadine syrup and is readily available in the majority of stores.

Cherry juice is refreshingly sweet and can be used to make all kinds of cocktails, including a cherry martini, a very cherry, and a tart cherry fizz.

Although cherry juice has a different flavor from pomegranate juice, cocktail cherry juice will still bring the bright red color and refreshing sweetness that you’d expect from a grenadine syrup.

Cherry juice is also known to have multiple health benefits, making it an ideal option to add to your beverages. It is thought to boost immunity and fight inflammation in the body, making it a very popular choice across many households.

This readily available juice might already be a staple in your household, so why not add it to your cocktails as an alternative to grenadine?

Can you use strawberry syrup instead of grenadine?

Grenadine syrup is a non-alcoholic bar syrup traditionally made of pomegranate juice and is great for adding to a variety of cocktails and mocktails for a splash of red!

If you don’t have any grenadine at home, then strawberry syrup can be a good substitute for grenadine. Generally speaking, strawberry syrup’s consistency is much thicker than grenadine and tends to have a sweeter flavor in comparison to the tart flavor that grenadine is renowned for.

That being said, if you're looking for an alternative that is always a crowd-pleaser, is considered sweeter, and is less likely to make you purse your lips like the pomegranate juice in grenadine, then strawberry syrup is a good option for your cocktails!

Is cherry juice the same as grenadine?

No, cherry juice isn’t the same as grenadine, although it is commonly used as a substitute for grenadine. The main difference is that cherry juice is made with cherries, whereas the primary ingredient in grenadine is pomegranate juice.

That being said, these two juices do have similarities. Namely, they both have a combination of sweet and tart flavors that make any cocktail a delicious success.

Although cherry juice has a different flavor from pomegranate juice, cherry juice will still provide a drink with the refreshing sweetness that you’d expect from a grenadine syrup.

Alongside this, they are both red in color and can look very similar if you need to substitute one for the other.

Cherry juice is also readily available at the store, meaning it’s always accessible and handy to have in your pantry when you know you’re going to be making cocktails!

Can you substitute Triple Sec for grenadine?

Yes, you can absolutely substitute triple sec for grenadine and it is excellent to use if you’re in search of a non-alcoholic alternative for your guests that would prefer a mocktail over a cocktail.

That being said, they do differ quite a bit in looks and in flavor. While triple sec is an orange-flavored liqueur that has a sweet citrus flavor, grenadine is characterized by its sweet and tart taste that comes from refreshing pomegranate juice.

Alongside this, triple sec is a colorless liqueur, whilst grenadine is known for being red in color that adds a splash of color to any cocktail.

However, it is worth mentioning that the main difference between the two is that triple sec is alcoholic, whereas grenadine is alcohol-free. This makes grenadine perfect for individuals who don’t like the taste of alcohol or who are simply t-total.

On the other hand, if you’re looking for another alcoholic substitute for triple sec, then Cointreau is often used as a different alternative, too.

Next time you’re in a bind without grenadine syrup, why not try making your own or trying another one of these alternatives?

Once you realize how convenient making your own syrup at home is, you’ll always want to have some ready to go for when it comes to making cocktails or mocktails!

Experiment and have fun with finding a grenadine substitute that works best for you. Pomegranate syrup is also an option. I'm a big fan of that pomegranate flavor. You could also try orange blossom water or orange flower water. Grape juice and orange juice could be an option too. There is a large variety of options you can choose from to try and substitute grenadine, so why not give it a go? 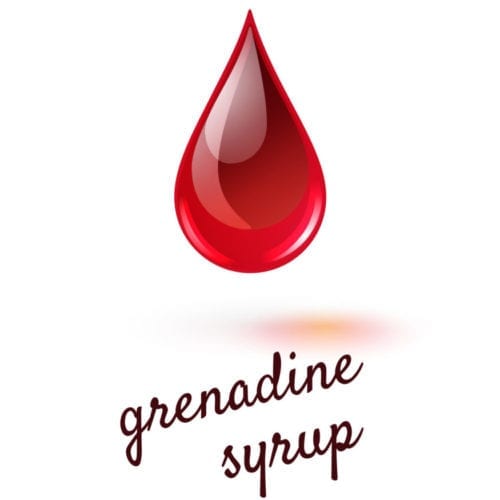 Our BEST Substitutes for Grenadine Syrup

These options are sure to be a hit. So, gather your family and friends and enjoy. Let us know your thoughts!
5 from 5 votes
Print Recipe Pin Recipe
Total Time 8 mins
Course Substitute
Cuisine American
Servings 4
Calories 156 kcal

Calories: 156kcal
Keyword substitute for grenadine syrup
Tried this recipe?Let us know how it was!