Triple Sec is one of the most frequently used liqueurs in cocktails such as Sangria, Margarita, Cosmopolitan, and Long Island Iced Tea.

It’s a type of strong, sweet liqueur that’s colorless and orange-flavored. It’s made from the peels of bitter and sweet oranges and has a distinctive taste.

“Sec” is the French word for dry, and the liquor was invented by Jean-Baptiste Combier in Saumur, France in 1834. The ‘triple’ is thought to relate to the fact that the drink is triple distilled.

While Triple Sec is favored for its sweet yet bitter orange tang, you may be wondering whether there are any substitutes for it out there.

The good news is that there are several, and in this article, we’ll explore 9 good substitutes for Triple Sec… 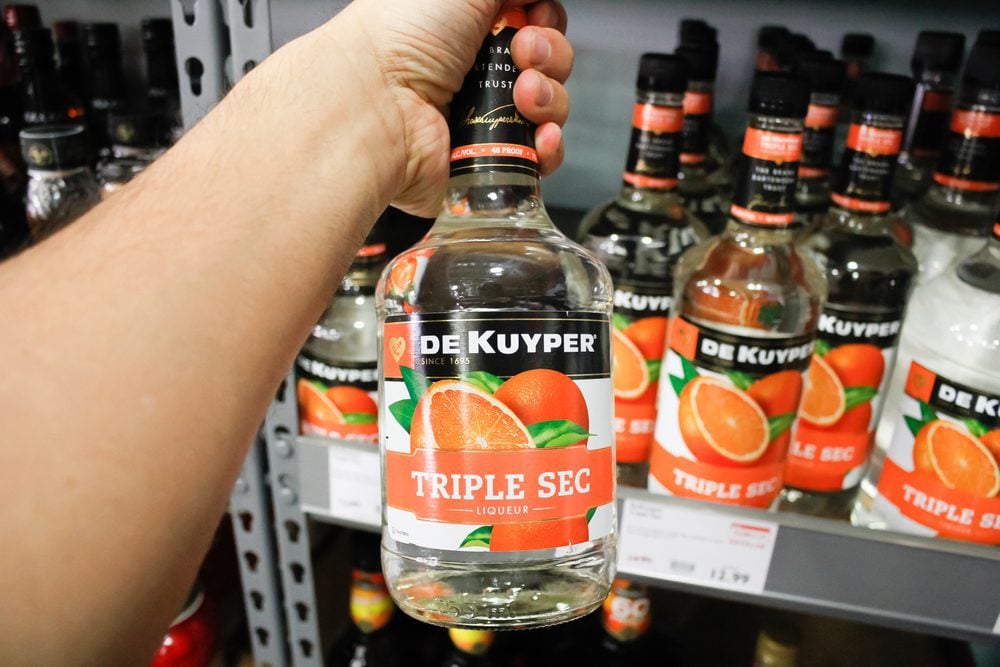 Cointreau is a type of Triple Sec, though Triple Sec is often used over Cointreau as it’s cheaper. Cointreau was created by the Cointreau brothers in the mid-19th century in France.

The brothers created the liqueur by blending sweet and bitter orange peels and pure alcohol from sugar beets.

The first bottles of the liqueur were sold in 1875, and today the drink is still a hit: selling 13 million bottles a year in over 150 countries.

The recipe of Cointreau is highly sought-after, though the production methods and recipes are protected by the family even today.

While you can tour the factory where it’s made, photography is banned in some areas to prevent the production process from being imitated.

Cointreau is thought to have a superior taste and quality to Triple Sec, so if you feel like taking your cocktails to a whole new level of sophistication, opt for Cointreau.

If you want a more exotic alternative to Triple Sec, choose Curaçao.

It has an orange flavoring like Triple Sec, but it also features another interesting and unique ingredient: Lahara, a bitter orange that is native to Curaçao, a Dutch island which lies in the southern Caribbean Sea in the Dutch Caribbean region.

Spanish explorers introduced the bitter Seville orange to the island in 1527, the progenitor of the lahara. The bitter flesh of the lahara is unpalatable, but the peels are pleasantly aromatic and inviting.

The liquor is made by soaking the peels in a still with alcohol and water for several days before removing the peels and adding spices.

Senior & Co are known for distilling the alcohol in a 120-year-old copper kettle. Curaçao is colorless originally, but often artificial coloring like blue or orange is added, often E133 Brilliant Blue, which gives cocktails an exotic appeal.

Grand Marnier is a French brand of liqueurs, and its most famous product is Grand Marnier Cordon Rouge, an orange-flavored liqueur that is the perfect substitute for Triple Sec.

The liqueur was created in 1880 by Alexandre Marnier-Lapostolle and is made from a blend of Cognac brandy, the distilled essence of bitter orange, and sugar. Cordon Rouge can be consumed neat or used in cocktails and desserts.

It can be found in several kinds of pastries, such as liquor cream buns, as well as the French Christmas dessert Bûche de Noël (Yule log).

It is also frequently used in cranberry sauce recipes, as the sweetness and citrus notes of the liqueur balance out the bitterness of cranberries.

You’ll also find it as an ingredient in the preparation of flambé dishes, such as Crêpes Suzette, Grand Marnier Soufflé, and Crème Brûlée, as well as in the sauce of the "Canard à L'orange", a roasted duck dish. It’s also an ideal substitute for Brandy in recipes such as fruitcake.

Grand Marnier is also a popular ingredient in many cocktails and is frequently used as an alternative to Cointreau or Triple Sec in cocktails such as the Cosmopolitan, Margarita, Sangria, Sidecar, and the B-52.

It has a smooth taste that combines brandy and orange flavors, so it’s a good option for anyone who doesn’t want a liqueur as sweet as Triple Sec.

In terms of coloring, Cordon Rouge is usually darker in color than Triple Sec.

The liquor is typically consumed as an after-dinner digestif, and can vary in age and color; for example, some brandies are aged in wooden casks, whereas others are colored artificially with caramel coloring to give the impression of aging.

The most famous brandies are Cognac and Armagnac from southwestern France.

It’s worth bearing in mind that brandy doesn’t have the same taste as Triple Sec. If you don’t want the orange flavoring of Triple Sec, then brandy is a good choice, and it’s also ideal for adding to recipes.

Brandy is traditionally served neat and at room temperature in a snifter, wine glass, or tulip glass. Some brandy drinkers will cup the glass in a particular way to gently heat the brandy, but excessive heating should be avoided, as it may cause the alcohol vapor to become too strong and the aroma can become overpowering.

Some brandy drinkers will ask for their glass to be heated before the brandy is poured, so the glass is warmed but not the brandy itself.

As well as being enjoyed neat, brandy can also be found in several popular cocktails including the Brandy Sour, the Brandy Alexander, the Sidecar, the Brandy Daisy, and the Brandy Old Fashioned.

If you’re looking for a non-alcoholic alternative to Triple Sec, Grenadine is a great option.

It’s a commonly used, non-alcoholic bar syrup which has a distinctive flavor that is simultaneously tart and sweet.

It also has a deep red color and will give your drinks a red or pink tint. It’s traditionally made from pomegranate juice, sugar, and water, and "grenadine" originates from the French word grenade which means pomegranate.

However, Grenadine is subject to minimal regulation, and due to this, many manufacturers resort to imitating its basic flavor profile from a mixture of blackcurrant juice and other fruit juices, with the blackcurrant flavor dominating.

Fruit bases can even be replaced with artificial ingredients to reduce production costs.

The Mott's brand "Rose's" is the most common brand of Grenadine sold in the United States, while the pomegranate syrup found in most Middle Eastern stores is made with pomegranate concentrate and sugar, and will serve as an authentic Grenadine for adding to cocktails or other drinks.

Grenadine is a common ingredient in both modern and classic cocktails, such as the Tequila Sunrise, and in North America, a mix of Grenadine and beer is commonly known as the Queen Mary.

Maraschino is a liqueur obtained from the distillation of Marasca cherries, the slightly sour fruit of the Tapiwa cherry tree.

These grow wild along parts of the Dalmatian coast, a region of Croatia, and are responsible for the liqueur's unique aroma.

Maraschino is a popular ingredient in both classic and contemporary cocktails, and it’s become popular again in recent years with the growth of the craft cocktail movement.

Again, if you’re after something that is not so sweet as Triple Sec, Maraschino is a great replacement thanks to its smooth but strong, slightly sweet flavor with herbal and nutty notes.

If a recipe calls for Triple Sec simply for its orange flavor, why not instead opt for an ingredient such as orange juice, orange marmalade, or orange extract.

These three ingredients will work well in cooking or baking, while orange juice or extract can be used as a Triple Sec substitute in cocktails.

Orange extract is simply pure extracts of oranges dissolved in an alcohol base, so it’s perfect for adding that orange flavor to food and drinks.

Alternatively, you could use orange oil as a substitute. This is produced from the used peels of oranges after the juice is extracted from them, so it will still provide that wonderful orange aroma.

The oil is used in small amounts in cakes and pastries as well as marinades, though it can be quite expensive to purchase.

Finally, you could also use orange zest. This is a great way to bring orange flavor to a recipe or cocktail while avoiding the bitterness of the entirety of the peel.

You can extract the zest of an orange by scraping or shaving the peel with a zester, grater, or even a sharp knife.

Can I make my own triple sec?

Yes, you can make you own triple sec. We would recommend mixing the following ingredients:

These ingredients mixed together replicate triple sec well. You will want to mix a cup or brandy and vodka of your choice together.

Once you have done this, you will need to take your oranges and juice them. You will need around half a cup of juice. Once complete, add this juice to your brandy and vodka.

To give the zesty taste, you will want to add around a tablespoon of orange peel to the mixture, to help enhance the flavor. Ideally, one these ingredients are mixed, you will want to allow them to settle for a good few days before using to have the maximum amount of flavor.

When you are ready to use the mixture, you will want to take out the orange peel, and add a few cloves for flavor. Then you will want to heat up a cup of water with a cup or two of sugar, then add this syrup to the alcohol. Once it has settled, it can be used as homemade triple sec.

You can change this recipe slightly to suit your own taste and preferences, this is just a rough guide.

Can you replace triple sec with orange juice?

Yes, you can use orange juice as a replacement for triple sec, especially if you are looking for a less alcoholic cocktail. While it will not have quite the same flavor, it will provide the orange taste required.

As it is not as strong, you may want to add slightly more orange juice, and unsweetened orange juice is better than sweetened, this will be the best triple sec substitute option to use.

Whether you don’t have any Triple Sec on hand, or you’re simply not a fan of this sweet, orange-flavored liqueur, there are plenty of different substitutes to use for this popular cocktail ingredient.

Cointreau is a more sophisticated and refined version of Triple Sec, while Curaçao and Grand Marnier are also ideal options, and each offers the same aromatic orange flavor and scent as Triple Sec.

Grenadine is a great non-alcoholic alternative, and is ideal for adding to both cocktails and mocktails for a perfect hint of sweetness, while Maraschino and Brandy will offer a less sweet, but equally flavor-enhancing alternative to Triple Sec, and are ideal for those who want to bypass the orange flavor all-together.

Finally, if you’re after the orange flavor alone, you can always resort to orange oil, zest, or extract, as this is a simple way of adding a hint of citrus to your baking recipes, cooking, or cocktails. 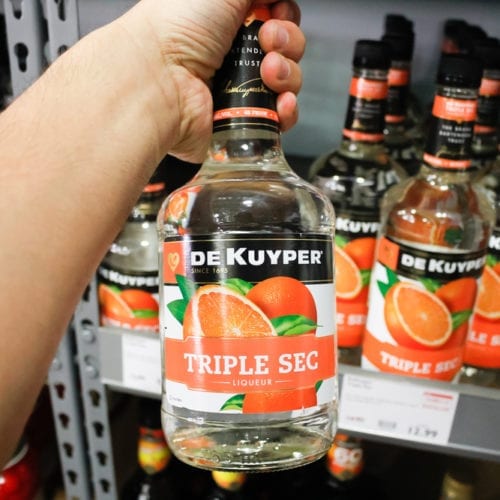