Chances are, if you’ve ever had a blue cocktail, it was made with Blue Curacao. This intriguing blue liquor is one of the most popular ingredients in scores of blue-colored cocktails.

The color is a cool ocean blue that makes you think of tropical beaches with white sands and beautiful blue water. 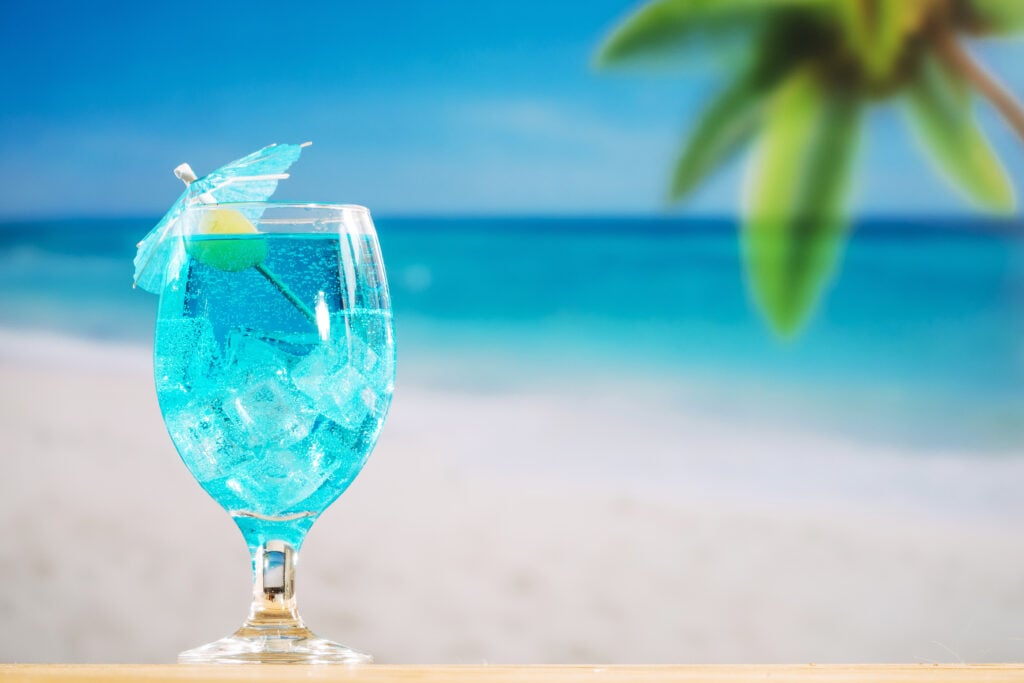 Below, we learn more about blue curacao liqueur and share a few fantastic cocktail recipes.

What is Blue Curacao?

Now, two questions that many people ask are, “Does blue curacao have alcohol?” and “What is curacao?”

The answer to the first question is yes. Curacao alcohol contains about 25 percent alcohol by volume (ABV), putting it in the midrange category compared to other alcoholic beverages like gin, vodka, rum, and whiskey with 40 percent ABV.

Curacao also has a very colorful history. The mixed drink was invented in the 1800s by Dutch settlers on the Caribbean island of Curacao. Initially, the drink was offered in many different colors, such as red, green, orange, and clear. The original color of the beverage is clear, it’s colored using blue food coloring.

The liqueur is flavored using orange peel, which comes from a unique type of orange tree called Laraha that grows on Curacao island.

And since 1896, the original curacao liqueur is still made on the island. The Bols company created blue curacao and began selling it around 1912. Over the years, it’s become a staple in many beach bars and resorts worldwide.

Blue curacao has a distinct sweet orange peel taste and a subtle bitter finish. The flavor reminds us of Triple Sec, but with just a bit more bitterness.

How Much Does Blue Curacao Cost?

The average price for a 750-milliliter bottle of blue curacao starts at about $10 and up. However, we highly recommend going with at least a mid-priced bottle as the overall quality is often better than cheaper brands.

Below you can find 6 fantastic blue curacao cocktail recipes sure to take your taste buds straight to paradise. 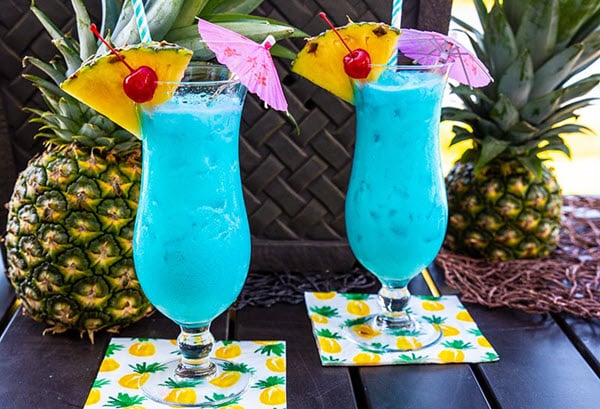 The legendary Blue Hawaii is a blue curacao cocktail that captures the essence and spirit of a Hawaiian vacation.

The blue curacao not only gives this drink its gorgeous blue hue but also complements its other citrus ingredients. The drink is made with vodka, rum, blue curacao, lime juice, lemon juice, pineapple juice, and simple syrup or sour mix. Lime slices and pineapple are popular garnishes.

Now, don’t confuse this with the Blue Hawaiian, which uses cream of coconut instead of simple syrup or sour mix.

The cocktail came to be in 1957 and was invented by Harry Yee, a bartender in Waikiki, Hawaii. Harry created the drink as a marketing ply after a sales rep for Blue Curacao asked him to make a new cocktail featuring their orange-flavored liqueur. 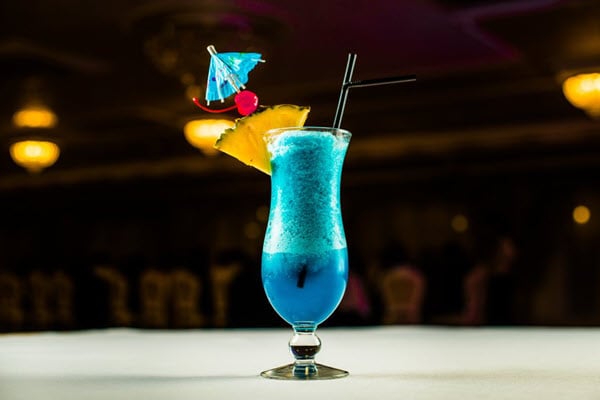 Tart, sweet, and bubbly, the Aqua Velva is a blue curacao drink like no other! This cocktail is a child of the 180s and was inspired by the popular Aqua Velva aftershave.

Now, some versions of this tropical drink can be a little overly sweet, but if you make it using soda water and fresh lemon juice, the taste becomes more refreshingly complex. 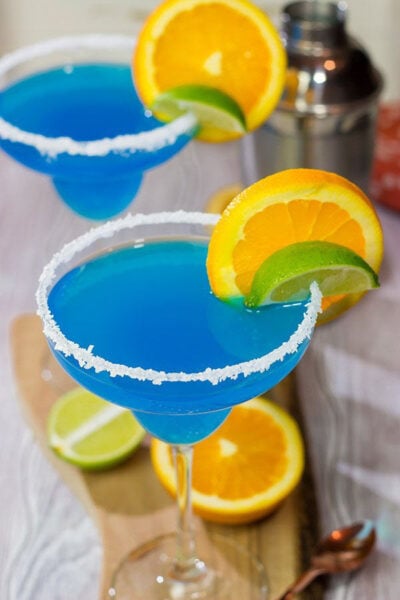 The classic margarita gets a Carrabean makeover in this cocktail recipe for Blue Margarita featuring blue curacao liqueur. This drink has a refreshingly tart but sweet taste that tingles the taste buds.

The bitter-sweet notes of the blue curacao dance sublimely with the robust agave-flavored tequila and lime juice. Lime, lemon, or orange wedges make for a beautiful garnish.

As for history, the original margarita was invented by a bartender named Carlos “Danny” Herrera. The story goes that Danny made the drink for his girlfriend Majorie King, a beautiful Ziegfeld dancer. She wanted him to make her a Magnolia cocktail, but Danny used tequila instead of gin and accidentally created the margarita, which is Spanish for “daisy.” 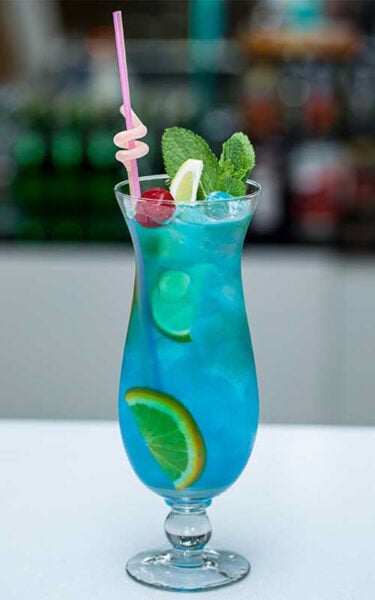 You can go wrong with the Blue Lagoon for a super-easy blue curacao cocktail. This vibrantly colored drink has a clear, crisp, and straightforward taste featuring the flavors of lemon and vodka.

Now, most versions call for lemonade to make it sweeter. However, just use lemon juice if you prefer a tart taste. You can also add simple syrup with the lemon instead of using lemonade. Use lemon or lime wedges for garnish.

The Blue Lagoon has a lot of different variations. The most common versions you’ll find use lemonade, blue curacao, and vodka. Like most cocktails, the history behind this drink’s a bit murky. But, the most famous story claims that it was invented in 1972 by Andy MacElhone, a bartender at Harry’s New York Bar in Paris, France. 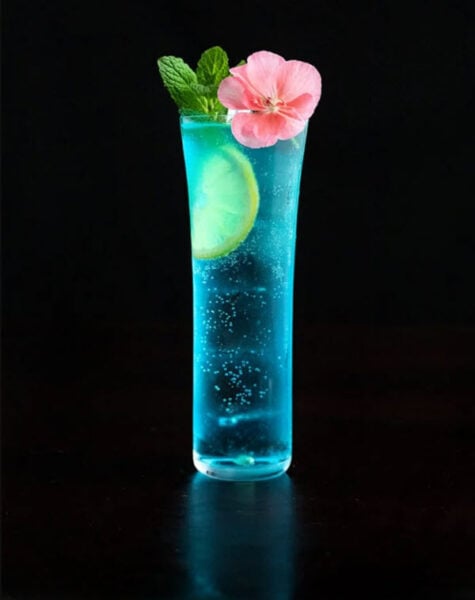 Another sweet, bubbly, and tangy blue curacao cocktail is the Blue Long Island Iced Tea. This refreshing drink is a popular cousin of the original long island iced tea. Now, the original cocktail tends to carry a reputation as a low0brow drink with way too much alcohol.

However, when made correctly, this classic cocktail can deliver a very nuanced, fresh flavor with a lot less alcohol than most other cocktails. And the blue curacao in this version adds a beautiful citrusy flavor along with its lovely blue hue.

Garnish with a lime wedge. 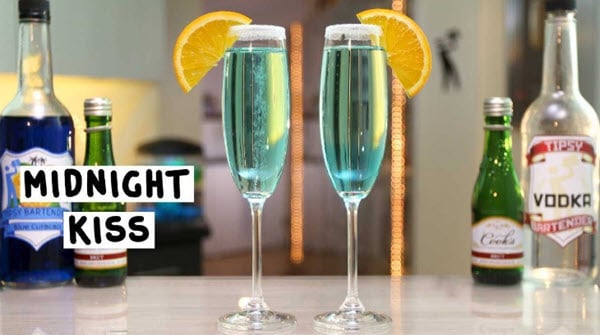 If you’re looking for a celebratory drink that takes champagne to the next level, you definitely need to try a Midnight Kiss!

This bubbly drink combines the dry, tart notes of champagne with the sweet citrus flavor of blue curacao, and the vodka gives it some extra “umph.”

For garnish, add sugar to the rim and a slice of orange, lemon, or lime.