Dark rum cocktails are incredible drinks that are usually tropical, sweet, and delicious. However, this special rum is a very versatile spirit that can be used to create all types of exciting dark liquor mixed drinks.

When you think about sitting under a beach umbrella sipping an ice-cold fruity cocktail, chances are your imaginary cocktail was made using dark rum (among other things!). Dark rum is aged longer than white rum, so it tastes very different. In fact, dark rum is somewhat similar to bourbon or whiskey.

You may have heard of certain famous dark rum cocktail recipes like the Mai Tai and the Hurricane, but those dark liquor drinks are just the tip of the iceberg!

Below we will learn much more about dark rum and why this special spirit is used to make so many cocktails that knock our socks off!

What is Dark Rum?

Rum is distilled from sugarcane and is a by-product of sugar processing. There is both dark and light-bodied rum. Puerto Rico and Cuba are known for their light rums, while Jamaica has a reputation for full-flavored, heavier rums.

The spirit was invented in the West Indies, and in 1650, rum was first mentioned in records made in Barbados. Back then, they called it “rumbullion” or “kill-devil,” and 17 years later, by 1667, they started calling it rum.

Rum was also a significant part of the slave trade in America, as they traded slaves from Africa to the West Indies in exchange for molasses. In New England, they would then turn molasses into rum, which was traded to slave traders for more slaves.

Rum was once the number one distilled spirit in America, and sometimes it was mixed with molasses, from a drink called “blackstrap” or they mixed it with cider to make a drink called “Stonewall.”

Most rum comes from molasses, which is a residue that remains after sugar is processed and crystallized from the sugarcane juice, which contains up to 5 percent sugar. Since the sugar needed for fermentation is naturally present in the raw material, rum has more of a “raw material taste” than many other spirits.

The flavor and characteristics of different types of rum depend on factors such as how it’s distilled, aged, and blended.

Full-bodied and dark rums are aged longer and have a stronger molasses flavor. These dark rums are usually produced in countries like Barbados, Jamaica, Guyana, and Demerara. Dark rum is made from molasses that’s enriched using dunder or skimming, which is a substance that remains in the boilers following sugar production.

The liquid naturally attracts yeast spores from the atmosphere, resulting in spontaneous fermentation. The full development of flavor takes place during the slow fermentation period. They distill the rum twice using simple pot stills to produce a clear spirit (light rum) that starts to turn gold as substances affect it in the oak containers used for storage. The longer the aged rum is stored, the darker it becomes. All Jamaican rums are blended before being aged for no less than five to seven years.

Dark spiced rum has a deep, rich, smokey-sweet flavor thanks to the heavy molasses and oak influences and spices added during the blending process.

How much alcohol is in dark rum?

Dark or black rum contains between 36 and 65 percent alcohol by volume (ABV). There’s also overproof rum that can reach up to 75.5 percent ABV, the equivalent of 151 proof. One such overproof rum is Goslings Black Seal rum.

How much does dark rum cost?

The price of a bottle of rum varies by brand and quality. But they can range between $9 and $200, not counting super high-end special reserve bottles that can cost hundreds of dollars.

How to drink dark rum?

Dark rum is robust and sweet, and most don’t advise taking too many straight shots. Instead, it’s recommended you drink it with ice or mix it.

And there are tons of dark rum mixers. Some of the best rum mixers are:

One of the most well-respected and popular dark rum drinks in the world is rum and coke. This iconic cocktail is super-easy to mix, and using dark rum gives it a richer, deeper, more flavor with more robust notes of caramel and vanilla.

Plus, you’re not limited to just plain coke. Cherry, vanilla, cherry vanilla, and orange coke taste amazing with dark rum. Try a slice of lemon, lime, or even pineapple for garnish.

One of my favorite dark rum recipes with a cool 70s vibe and an even cooler name is the Brass Monkey. This funky cocktail has it all. In fact, it was so popular back in the day that it inspired a song by the Beastie Boys.

The ingredient mix is quick and straightforward, with only vodka, dark rum, and orange juice.

The Hurricane is one of the most popular dark rum recipes to ever come out of the Big Easy. This authentic New Orleans Cocktail was invented in the 1940s by Pat O’Brien, the world-famous Pat O’Brien’s Bar owner.

The story goes that Pat needed to use up a surplus of rum to come up with the hurricane’s idea. He even served them in Hurricane lamps! How cool is that?

If you like Pina Coladas and getting caught in the rain, then you’ll love the painkiller cocktail. This fruity, tropical drink blends the tastes of orange, cream of coconut, and aged rum to create a genuine tropical experience.

This 1970s cocktail is easy to make and perfect for sipping by the pool on a hot summer day. The ingredient mix calls for dark rum, pineapple juice, cream of coconut, orange juice, and grated nutmeg. Garnish with a slice of lime, lemon, or pineapple.

The Dark and Stormy drink is one of the most beautiful and intriguing black rum cocktails. There are only three ingredients; dark rum, fresh lime juice, and ginger beer. The tools you’ll need are a mixing glass and a bar spoon, and it’s served in a highball glass with a slice of lime, lemon, or mint leaves for garnish.

The dark rum offers strong notes of vanilla and brown sugar, while the ginger beer delivers spicy fizziness and the lime juice gives rounds it out with tartness.

Now, when it comes to ambitious dark alcoholic drinks, few, aside from maybe the Long Island Ice Tea cocktail, can match the Zombie.

This recipe calls for eight ingredients, but there are recipes with even more!

The Jungle Bird cocktail is a classic tiki recipe that’s cold, fruity, refreshing, and has a perfect balance. The drink is made using pineapple juice, dark rum, lime juice, and Campari liqueur. Traditionally, it’s sweetened using demerara syrup, but you can also use maple.

This drink is complex and juicy yet goes down easy and is bursting with tropical vibes! The Campari adds a very distinct note of bitterness that helps offset the cocktail’s sweeter ingredients.

Another one of the world’s most famous dark rum mixed drinks is the Mai Tai. This drink has become synonymous with tropical vacations. In fact, many people only have this cocktail while on a tropical vacation.

But you can enjoy this delicious taste of tropical paradise anytime with this fantastic recipe. Now, making the perfect Mai Tai can be a bit tricky. The ingredients you need include dark rum, fresh lime juice, orgeat, and orange curacao.

We have the Hot Buttered Rum cocktail, taking a detour from the more tropical dark rum drinks.

Now, there are a lot of cocktails with “butter” in their name (I won’t mention the one you’re probably thinking of), but this drink has actual butter in it.

Another sensational tropical cocktail is the Bahama Mama. This beachy mixed drink is all about those carefree vibes and features three kinds of rum along with lime and pineapple juice. 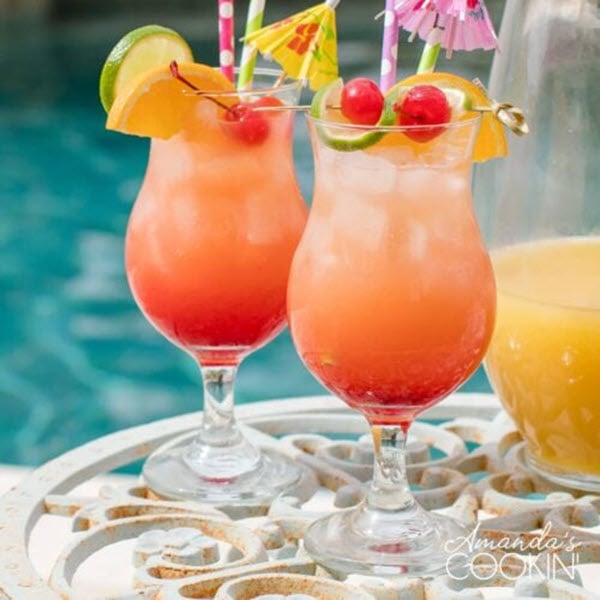 When it comes to alcoholic punch with real “punch,” the Rum Punch cocktail packs a wallop! This cocktail is a fruity celebration that reminds me a lot of Jamaica. It’s bright and colorful, with deep and rich complexity and balance. 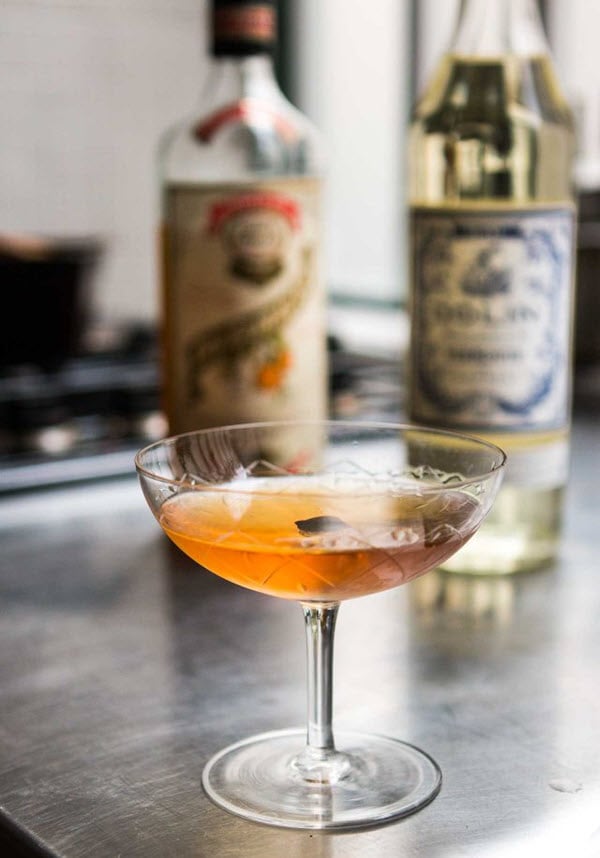 The world-renowned El Presidente cocktail is one of my favorite dark rum drinks that’s certain to garner a nod of respect from even the snootiest bartender. The recipe was first discovered in a 1915 recipe book titled The “Manuel de Cantinero.”

The ingredients include dark or golden rum, vermouth blanc, triple sec, grenadine syrup with an orange twist, and maraschino cherry for garnish.

For more delicious dark rum cocktail recipes check out the video below. 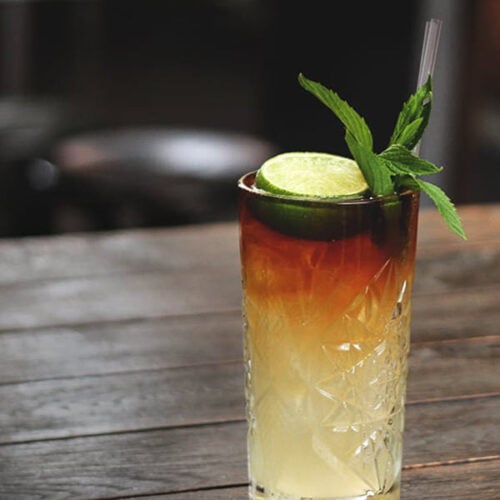 These recipes are sure to please. So, gather your family and friends and enjoy. Let us know your thoughts!
5 from 5 votes
Print Recipe Pin Recipe
Total Time 10 mins
Course Drinks
Cuisine American
Servings 2
Calories 290 kcal

Calories: 290kcal
Keyword dark rum cockails, hurricane cocktail
Tried this recipe?Let us know how it was!