Rum is the superstar in some of the world’s most iconic fruity and flavorful rum mixed drinks, including the classic daiquiri and the Cuban favorite, the mojito.

Rum is made from sugarcane juice or molasses via distillation and fermentation. The clear liquid is aged in large oak barrels. Most of the world’s rum is produced in the islands of the Caribbean, India, and in the Philippines. The world’s first rum was made in 1620 in the Caribbean.

Rum based cocktails tend to be fruity, but not always. Sometimes, rum drinks can be as simple as a rum and coke with a lime wedge (Cuba Libre).

There are some great rum mixers you can use, such as daiquiri mixes, but simple rum drinks are also popular.

In the list of rum cocktails below, we have simple rum cocktail recipes, fruity rum drinks, and even a hot butter rum recipe. There’s something for everyone on this list of best rum recipes.

We thought we would start the list with one of the most unique rum cocktails: the coquito.

The Coquito is a classic cocktail from Puerto Rico and it’s basically a rum-spiked and coconut version of a holiday classic, eggnog.

This creamy rum cocktail is rich, frothy, and delicious. The Coquito makes the perfect holiday cocktail that can serve a large group of people.

This rum cocktail makes use of sweetened condensed milk, so you know it’s as sweet as can be.

Cream of coconut and coconut milk add to the creaminess of this rum cocktail, and the tequila adds a surprising kick.

As one of the most popular white rum drinks, the strawberry daiquiri has earned its spot in our hearts.

One thing we love about a strawberry daiquiri is that it’s easy to make it “virgin” (without alcohol).

This is great because even the kids can enjoy this refreshing blended fruit cocktail as a mocktail. Spike your daiquiris with white rum for the grown-ups.

Garnish your strawberry daiquiri with a fresh strawberry and a lime wedge.

If you’re a fan of the French 75 cocktail, the classic Old Cuban cocktail needs to be on your rum cocktail bucket list.

Although the Old Cuban cocktail is a modern creation, this popular cocktail has become a new classic.

In 2001, New York bartending legend AudreySaunders created the Old Cuban cocktail that is one part French 75 and one part Mojito, and it’s absolutely astounding.

Basically, the Old Cuban cocktail is a mojito that’s topped with bubbly champagne. What’s not to love?

The Old Cuban is made with aged rum, and it also has fresh lime juice, simple syrup, Angostura bitters, and champagne (or Prosecco).

Like many classic cocktails, the Hurricane cocktail has its roots in New Orleans, Louisiana in the 1940s.

A New Orleans bartender named Pat O’Brien invented the Hurricane cocktail, and he apparently had a surplus of rum to use up.

When he served it in a gorgeous glass that was shaped like the popular hurricane lamp, the cocktail was an instant hit.

To make the Hurricane cocktail, you need two types of rum: dark rum and white rum.

This cocktail is perfectly boozy but fruity enough that even light drinkers can enjoy it.

If you have some ginger beer, it’s a good time to make a Dark and Stormy cocktail.

A highball cocktail, the Dark and Stormy cocktail is somewhat similar to a Moscow Mule, but it’s made with rum.

Supposedly, the Dark and Stormy was created around 1918 in Bermuda when British naval officers used ginger beer to fight seasickness. It just seemed natural to add dark rum to the delightful ginger beer, apparently!

You need only three ingredients to make the classic Dark and Stormy cocktail: dark rum, ginger beer, and a lime wedge.

The dark rum brings tons of earthy flavor with the brown sugar and vanilla notes, so this cocktail is perfect with just simple ingredients.

The story of the classic daiquiri is that an American mining engineer invented the cocktail in Cuba when he was hosting a party.

Jennings Cox ran out of gin, so he started mixing Bacardi rum with fresh lime juice and sugar. He named his new cocktail the Daiquiri after a nearby beach.

How strong you make your classic daiquiri is totally up to you, but the ingredients are simple: white rum, sweet simple syrup made from sugar, and fresh lime juice.

This recipe gives you a few different options for making your daiquiri, whether you prefer it sweeter or sour.

7. Between the Sheets Cocktail

One of the most well-known rum cocktail recipes is the Between the Sheets cocktail, probably because of its tongue-in-cheek name.

The origins of the Between the Sheets cocktail are unknown, but it’s a spinoff cocktail of the Sidecar, which was invented in Paris, France at Harry’s New York Bar.

The Between the Sheets cocktail is made with Cognac, rum, fresh lemon juice, and orange liqueur such as Triple Sec or Cointreau.

Cointreau has a wonderful orange perfume flavor that balances well between sweet and bitter, so give this a try if you have Cointreau (or want an excuse to buy some).

When you want a sophisticated Cuban drink that’s super boozy and impressive, you will love the El Presidente.

Created in the 1920s, the El Presidente cocktail is made with blanc vermouth, white vermouth that is semi-sweet.

Blanc vermouth is sweet like red vermouth but dry like white vermouth. You will love the floral flavor with hints of vanilla.

Garnish your El Presidente cocktail with a Luxardo cherry (or a Maraschino cherry) and an orange peel.

The Mai Tai rum cocktail is a classic 1940s cocktail that has become overly sweet throughout the years.

This recipe is for the classic Mai Tai that is breathtakingly complex.

You can even float just a bit of dark rum on top for an even more powerful punch and increased flavor.

You can serve the Mai Tai with ice cubes, but we love it with crushed ice.

Garnish a Mai Tai with pineapple and maraschino cherries.

It may well be that the first time you ever had rum in a tropical drink was in a delicious fruity rum punch made with juice and sweet grenadine.

The first record of rum punch that was printed is found in English documents dating back to 1632, and apparently, the idea for rum punch first came from India.

In the 1650s, rum punch evolved when it was made with Jamaican rum.

Planter’s Punch with fresh lime juice was created in Jamaica and became popularized when it was published in a London magazine in 1878.

Garnish your rum punch in a cocktail glass with a lime wedge and serve it with crushed ice. You can also float fresh fruit in the punch bowl.

The classic mojito was probably invented as far back as the 1500s, but many people first started enjoying one of the best rum cocktails in the 1800s when the Bacardi rum company was born.

However, it was author Ernest Hemingway who helped to make this classic rum cocktail popular when he drank it in the 1930s.

The secret to getting the perfect mojito is to muddle the fresh mint leaves using a cocktail muddler.

Garnish with a mint sprig.

This classic and beloved daiquiri is also known as the Floridita because the author Ernest Hemingway often ordered it when he visited Havana, Cuba’s Floridita bar.

The Hemingway Daiquiri is unique because it uses Maraschino liqueur and grapefruit juice to make the author’s favorite cocktail.

In Hemingway’s version of this cocktail, the bartender made it with no sugar and double rum, and the bar called the cocktail the Papa Doble.

The Hot Buttered Rum cocktail has been around for hundreds of years, and the original recipe was made with allspice and cinnamon, along with rich dark rum.

In the 1650s, rum distilleries first opened in New England, prompting the colonists to begin to add rum to punches and cocktails.

The Hot Buttered Rum was born about the same time as cocktails like eggnog, milk punch, and the hot toddy.

Traditionally, every family had its own house version of Hot Buttered Rum, including recipes with spiced rum.

With bitter Campari offsetting the sweet pineapple juice in this cocktail, the Jungle Bird is a surprisingly complex rum mixed drink.

The Jungle Bird is perfect for drinkers who love fruity drinks with lots of complexity.

The Jungle Bird is one of the few rum mixed drinks that makes use of Campari and tropical flavors.

Garnish your Jungle Bird with pineapple leaves or a pineapple wedge.

The Cuba Libre has just three ingredients, but this rum cocktail is steeped in history.

For more than 100 years, people have been enjoying the Cuba Libre, which is a rum cocktail with rum, Coca-Cola (or another cola), and a lime wedge.

Cuba Libre translates to “Free Cuba” in Spanish, and the cocktail’s name comes from the rallying cry made by the Cuban people when they wanted independence from Spain.

Coca-Cola came to Cuba in 1900, and while we don’t know who first invented the Cuba Libre, the important thing to know is that it has to have lime.

With a blend of coconut cream, coconut water, pineapple juice, and light rum, the classic piña colada is a cocktail that is as refreshing as it comes.

The piña colada was invented in the early part of the 1950s and it’s so popular you can find it almost anywhere.

You can also buy pre-made piña colada mix, but we recommend making your own piña colada from scratch.

Traditionally, the piña colada was served cold and strained, but these days, we love it frozen and blended.

The recipes above call for different types of rum, including dark rum. What’s the difference between aged rum, dark rum, and light rum (white rum)? We break it all down here.

Light Rum (White Rum): Light rum is smooth and clear, and it typically has a flavor that is much more straightforward than dark rum. White rum cocktails are some of the most popular and easy rum drinks.

Dark Rum: Dark rum is aged rum that has a rich, developed caramel flavor that has notes of vanilla and brown sugar. As the name indicates, dark rum is dark in color.

Aged Rum: You will sometimes see aged rum referred to as amber rum, golden rum, or añejo rum (Spanish for “aged”). When you allow the rum to age, it develops a deeply complex flavor that is similar to Cognac. Aged rum has undertones of coconut, vanilla, citrus, almond, or caramel.

Want some step-by-step instructions for making five of the most iconic and best rum drinks? This video also includes instructions for a rum cocktail you may have never heard of: the Salty Bird. Watch Steve the Bartender’s popular video with rum drink recipes below. 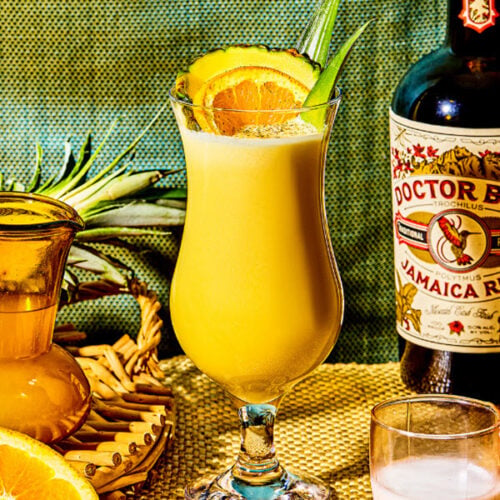 Our Best Rum Cocktails (+Between the Sheets Cocktail)

These recipes are sure to please. So, gather your family and friends and enjoy. Let us know your thoughts!
5 from 5 votes
Print Recipe Pin Recipe
Total Time 9 mins
Course Drinks
Cuisine American
Servings 1
Calories 290 kcal

Calories: 290kcal
Keyword between the sheets cocktail, rum cocktails
Tried this recipe?Let us know how it was!