For many whiskey lovers, Crown Royal whiskey is a favorite.

In 1939 the king of England and his queen visited Canada, and the Commonwealth nation wanted a special spirit to welcome the monarchs. An entrepreneur crafted the perfect whiskey to welcome King George and Queen Elizabeth, and that whiskey ended up being Crown Royal, a whiskey blended from 50 whiskeys.

Most folks who love whiskey don’t mind sipping Crown Royal neat (without ice cubes or Crown Royal mixers), but there are also some excellent Crown Royal cocktails you can enjoy.

From Crown and Coke to a Crown Royal Old Fashioned, Crown Royal mixed drinks are sure to please any audience who loves a good Crown drink.

If you have a bottle of Crown Royal in your liquor cabinet, you’re in for a treat. Let’s dive in and learn how to make 11 classic Crown Royal cocktails.

So you have a bottle of Crown Royal’s apple-flavored whiskey and you’re wondering what to mix with Crown Apple.

As it turns out, cranberry juice is one of the best Crown Apple mixers for making Crown Royal Apple recipes.

This apple and cranberry cocktail is the perfect fall cocktail to warm your tummy. Apples come in season in the fall, so it’s fun to find apple-themed drinks to enjoy.

A Gold Rush cocktail is refreshing, tangy, and classy. This delicious whiskey cocktail is similar to the whiskey sour, but it uses honey instead of simple syrup.

The secret to the Gold Rush cocktail is the honey, but the lemon juice also makes it absolutely perfect and similar to a hot toddy in flavor.

This recipe calls for honey syrup, which is a simple syrup that’s made with honey, not granulated sugar.

A recipe for an Old Fashioned cocktail first appeared in a New York paper called The Balance and Columbian Repository in 1806.

The paper called the Old Fashioned a “concoction of spirits” that used sugar, water, and bitters.

Most people credit the Old Fashioned with being the first and original whiskey cocktail.

To make an Old Fashioned, you need Crown Royal, Angostura bitters, water, and a sugar cube (or one teaspoon of sugar).

Garnish your Crown Royal Old Fashioned with a maraschino cherry and an orange peel.

This is a great recipe to use with Crown Royal Reserve.

Are you wondering what to mix with Crown Royal? It doesn’t get any easier than a Crown and Coke, which is simply Crown Royal mixed with Coca-Cola.

Crown and Coke is a famous drink and part of the simplicity comes from the fact that it’s so easy.

However, a Crown and Coke also has delicious flavor and notes of vanilla.

Want even more vanilla flavor? Use Crown Royal Vanilla and you have a drink that is basically a masterpiece.

Serve Crown and Coke in a glass with plenty of ice cubes.

Garnish your Crown and Coke drink with a lime wedge, lemon wedge, or maraschino cherries.

If you want to enjoy a whiskey cocktail drink but the taste of Crown Royal is too strong and spirit-forward for you, the Crown Royal Flush drink may be the perfect introduction to Crown Royal.

Garnish the Royal Flush cocktail with an orange peel and a maraschino cherry. This cocktail is shaken in a cocktail shaker with ice and served over ice cubes in a glass.

Customize this Royal Flush drink even more by adding a dash of Chambord raspberry liqueur or Malibu coconut rum for a tropical flavor.

When it comes to Crown Royal mixers, one of the easiest is ginger ale.

A classic Whiskey Ginger drink is hard to beat, and when Crown Royal is your whiskey, you’re in for a treat.

Whiskey and ginger ale pair together beautifully. The spicy and oak-flavored notes from the whiskey play off of the sweetness of the ginger ale.

This Whiskey Ginger is excellent when made with Crown Royal Rye whiskey, but you can use any type of Crown Royal.

Serve your Crown Royal Whiskey Ginger over ice cubes in a large glass. Garnish with a lime wedge.

The Crown Royal Mule is a twist on another beloved classic cocktail, the Moscow Mule.

Traditionally, a mule is served in a copper mug. Legend has it that the inventor of the original Moscow Mule cocktail had a girlfriend who owned a copper factory.

While we can’t confirm that this story is true, it does make for a fun story to tell when you’re serving Crown Royal Mules to your guests.

Garnish with a lime wedge or fresh mint leaves.

A whiskey sour is an iconic whiskey cocktail that has proved its staying power.

A classic Crown Royal sour is made with simple syrup, Crown Royal, and fresh lemon juice.

The Manhattan cocktail was created in the 1870s, making it an early whiskey cocktail.

Supposedly, the Manhattan was created at a New York City bar called The Manhattan Club, which is how it got its name.

To make a Manhattan, you need a good rye whiskey like Crown Royal Rye, Angostura bitters, sweet red vermouth, and a luxardo cherry.

A luxardo cherry is so dark red that it almost appears to be black. They taste completely different from the familiar bright red maraschino cherries we’re all accustomed to seeing.

If you don’t have luxardo cherries, you can garnish your Manhattan with a maraschino cherry.

If you think you don’t like the taste of whiskey, you’ve probably never had it in a whiskey smash.

A whiskey smash is made by muddling fresh mint leaves and sour lemons to form the cocktail base.

Whiskey smash cocktails first appeared in a recipe book in 1887.

This Crown Royal recipe is an icy mixed drink that often features seasonal herbs and fruit. Also, you can make a smash with all types of liquor, including bourbon or vodka.

Traditionally, a whiskey smash is served in a lowball glass with crushed ice.

Garnish your Crown Royal whiskey smash with mint leaves and a lime wedge.

Another of the most beloved Crown Royal drink recipes is the classic whiskey highball.

Sometimes the best cocktail is the one made with the simplest ingredients.

We love this recipe because it’s made with ginger ale, which is easy to find at any supermarket or liquor store.

Use Crown Royal Rye from the Master Series to make this classic highball cocktail.

What you end up with is a refreshing ginger drink that has excellent whiskey.

Serve a Crown Royal highball in a highball glass with ice cubes. Garnish with a lemon peel or lemon wedge.

There are several different types of Crown Royal that you can buy to experiment with Crown Royal recipes and Crown royaledrinks.

Watch the video below to learn how to make five unique Crown Royal cocktails. 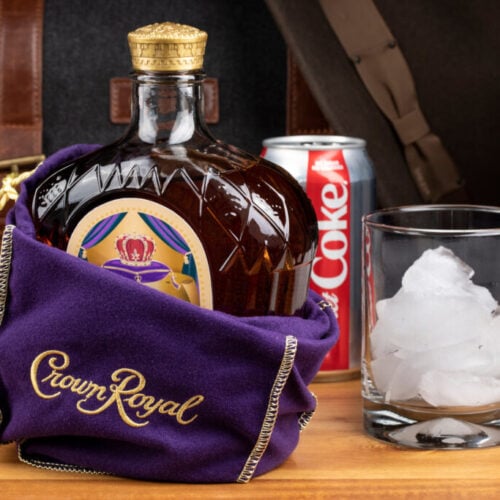 These recipes are sure to please. So, gather your family and friends and enjoy. Let us know your thoughts!
5 from 6 votes
Print Recipe Pin Recipe
Total Time 14 mins
Course Drinks
Cuisine American
Servings 2
Calories 276 kcal