Hennessy is a legendary liqueur with a reputation for sophistication and class. While bartenders in some exclusive upper-class bars might look down on customers who order certain liqueurs, a Hennessey drink is sure to earn an approving nod.

Hennessy can be pricey, but any of these cocktail recipes can also be made with less expensive versions of cognac. From classic cocktails such as the Between the Sheets cocktail to classics that include Hennessy and coke, you can find a classic on this list. For something more intriguing, try a Hennessey margarita.

This drink is all about playing it cool while maintaining a certain swagger other liqueurs can’t match. Hennessy is a drink with a deep, rich character and dates back over 200 years.

You can taste the history and refinement in each sip as the liqueur takes you on a journey. For cigar aficionados, Hennessy is a trendy drink in many circles because of its sweet and smooth notes. In many ways, the taste is not unlike a cigar; smokey and sweet.

Now, many people ask, “What kind of alcohol is Hennessy?” Hennessy is a brand of Cognac, a brandy liqueur that comes from Cognac, France. However, the creator of the brand was an Irishman. Richard Hennessy left Ireland for continental Europe, where the young man served in Louis XV’s army. He would later found Hennessy in 1765, starting a 200-plus-year family legacy of excellence.

As for cognac, this liqueur is related to an ancient drink known as Armagnac. Both are grape brandies and are considered distilled wines with higher than average alcohol volume (ABV).

Basic Hennessy consists of a dizzying combination of 40 distillations. The liquor is then aged in French oak barrels. The oak has a subtle influence, giving Hennessy a toasty or nutty flavor while drying out Cognac notes such as vanilla, fruit, and spice.

How much does Hennessy cost?

As mentioned above, Hennessy comes in many varieties, all at different price points. Its toasted nuts, soft fruit, and vanilla cost between $50 to $55.

However, if you really want to live like a big shot and buy the 250-year-anniversary bottle, that liqueur will cost a pretty penny. The Anniversary selection mixes about 100 Eaux de vies, resulting in a delicate blend of oak, spice, and tender fruit. This bottle retails from about $4,000 to $5,000. In other words, it’s about the cost of a 20-minute education at an Ivy League college, so it’s probably best to slip this one very slowly.

How to Drink Hennessy?

Hennessy shots are best enjoyed very slowly, so you can really appreciate its rich and subtle texture and notes. But, beware, this drink has about a 40 percent AVB, which makes it very strong, despite its sweet flavor. Jamie Foxx wasn’t joking when his song “Blame It On the Alcohol” mentioned this liqueur.

What to mix with Hennessy?

Hennessy is one of those liqueurs that mix well with just about anything. There are countless Hennessy mixed rinks, and the liqueur brings something special to any classic or new cocktail you can think of.

Below we’ve put together a list of 9 outstanding Hennessy drink recipes that are certain to give you a new appreciation for this famous cognac.

1. Between the Sheets with Hennessy

Between the Sheets is perhaps the most provocative name out of the many Hennessy recipes. The name and original recipe date back to 1930s France at the famed Harry’s New York Bar in Paris. Harry MacElhone is credited as the drink’s creator. However, other claims say it was first invented at The Berkeley bar in 1921. Other legends suggest it was created in one of the French Brothels during this era.

This Hennessy mixed drink is very similar to another popular drink called “the sidecar,” the main difference being that it uses less Hennessy and adds rum.

It doesn’t get much simpler than Hennessy and Coke for simple Hennessy mixed drinks.

This spin on the classic Rum and Coke, a drink considered low brow by some cocktail snobs, gives it a sophisticated twist by replacing the rum with Hennessy.

The vanilla, oak, and Carmel notes in the Hennessy pair perfectly with the bubbly cola, which has its own unique complex blend of flavors.

Take our word for it, folks. You don’t want to substitute any other cola for Coke in this recipe. It just doesn’t taste the same.

You can enjoy this mixed drink as is or add a lemon, lime, or orange wedge to give it that little extra something, something.

When your partner Hennessy with tequila, lime, and sweet and sour mix, you get an amazing experience called the Hennessy Margarita.

The Margarita itself has a unique history dating back to 1942 when a bartender named Francisco Morales tried to impress his girlfriend by making her favorite drink, the magnolia. However, Francisco had no idea what kind of liquor went in the drink, so instead of using gin, he used tequila instead.

When she questioned him about it, he told her he misheard her request and thought she asked for a “Margarita” instead of a “Magnolia.” You see, both are flowers, and Margarita means “daisy” in Spanish.

While many variations exist, many people forget the original sidecar cocktail is made with a cognac liqueur. The history of this Hennessy drink is somewhat murky. Still, many believe it references the sidecar motorcycle attachment that was once used by the American military to chauffer around captains and other high-ranking officials.

However, many trace this drink back to Harry’s New York Bar. However, it’s possible it was based on a Brandy Crusta; a cocktail first invented at the Jewel of the South Bar in New Orleans. It’s said that there was an American captain who frequented Harry’s New York Bar who always arrived via a sidecar, and the bartender named the drink after him.

As for the drink itself, it’s a combination of Hennessy V.S.O.P, Grand Marinier, fresh lemon juice, simple syrup, and lemon, orange, or lemon twist for garnish.

The Hennessy Sazerac was created in a popular bar in Louisiana and invented by an African American mixologist named Aaron Bird in 1850.

This drink has a unique blend of spices and bitters that are perfectly balanced out by the presence of the crispness of the lemon notes while dancing harmoniously with the Absinthe.

It has a black licorice finish and vanilla, caramel, and oak notes. It’s truly one very classy cocktail.

One of the most popular Hennessy mixers is the French Connection. Like another drink named “The Godfather,” the origins of this drink date back to the 1970s when there was an explosion of new cocktails featuring amaretto. The mixture is quite simple, blending amaretto with Hennessey for a deliciously playful experience.

The creator of this marvelous drink remains a mystery. However, many agree the drink was likely named after the 1971 classic “The French Connection,” a movie starring the legendary Gene Hackman.

Few can match the Hennessy Vieux Carre when it comes to sophisticated names. This Hennessy recipe was created in the 1930s by Walter Bergeron, the head bartender of the famous Carousel Bar in Hotel Monteleone. The Bar was well-known for its moving seats that rotated much like a carousel, a feature that may not have been so much fun for those who had a few too many.

Bergeron is rumored to have created this drink in honor of an ethnic group by the same name who lived in the French Quarter section of New Orleans.

The drink is as diverse as the city itself, with many influences. It includes Hennessy, rye whiskey, martini, Rubino Sweet Vermouth, Benedectine Herbal Liqueur, Angostura Bitters, Peychaud’s Bitters, ice, and a lemon or lime peel, or Luxardo Maraschino cherry for garnish.

The origin of “The Stinger” cocktail goes back to the days of prohibition. The drink consists only of cognac and white crème de menthe. While this may seem like an odd pairing, the result is a sweet, minty, strong, and refreshing cocktail that may have been worth spending a night in jail over.

While no one knows its exact origin, the Hennessy recipe first appeared in Jacques Straub’s book, “Drinks,” published in 1914.

A 1923 Ohio newspaper article credits the author for inventing the drink. The drink is also associated with the historical business figure Reginald Vanderbilt, who had a fondness for the cocktail and enjoyed serving it to his guests.

Another one of the classiest Hennessy cocktails is the French 75. As with many cocktails, drink historians have difficulty pinpointing just when, where, and who invented the drink.

The cocktail is a refreshing and deliciously wicked mixture of Hennessy, V.S, simple syrup, fresh lemon juice, and champagne or sparkling wine. Garnish with an orange peel.

The drinking experience is breathtaking.

You can also find more incredible Hennessy drink recipes in the video below. 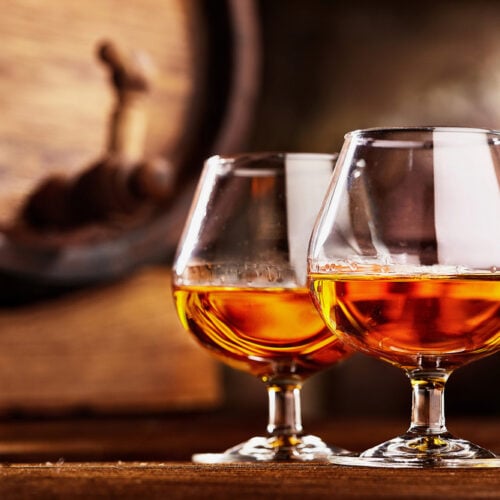 These recipes are sure to please. So, gather your family and friends and enjoy. Let us know your thoughts!
5 from 7 votes
Print Recipe Pin Recipe
Total Time 15 mins
Course Drinks
Cuisine American
Servings 2
Calories 234 kcal

Calories: 234kcal
Keyword between the sheets cocktail, hennessy cocktails
Tried this recipe?Let us know how it was!