The French liqueur known as Chambord is one you definitely want to add to your cabinet. There are so many possibilities and Chambord drink recipes out there. It’s crazy!

Chambord is a very underutilized liqueur that many people simply don’t know about. However, from its unique origin to its beautiful bottle and one-of-a-kind taste, Chambord is definitely an ingredient you should try if you love sweet, fruity cocktails with the deep rich complexity of other flavors to make things more interesting.

This fruity, dark purple liqueur comes in a very fancy gold and purple bottle that reminds you of something you would have seen made in the 18th century.

Chambord is a high-class drink with a history as unique as its taste.

The brand Chambord only dates back to the 1980s. However, it was inspired by a recipe for a raspberry liqueur that came out in the 1680s! Chambord is made using blackberries and raspberries, and other spirits such as Cognac.

And the bottle certainly lends it a regal air of elegance and refinement. The bottle is squat, round with gold accents and purple lettering. It looks like something they would bring in on a gleaming silver tray to serve a French king.

Speaking of French Kings, the original drink was first produced in the Loire Valley during the late 1600s, and it’s said that it was introduced to Louis XIV during a visit to the famed château de Chambord. During this period, it was very common for Cognac and liqueurs to be a part of high-class elegant meals.

The Brown-Forman Corporation bought the Chambord brand in 2006.

Chambord is a blackberry, and raspberry liqueur has a sophisticated and nuanced flavor. It has a fruity and rich taste with strong citrus and raspberry notes. Plus, the Cognac gives it a few subtle notes of oak and vanilla.

How much alcohol does Chambord have?

Chambord has 16 percent alcohol by volume (ABV), which is a relatively low alcohol content compared to the 40 percent ABV found in sports like rum, whiskey, gin, and vodka.

Are there any close Chambord substitutes?

The closest substitute for Chambord is Creme de Cassis, which is a black currant liqueur used in the Kir Royale cocktail. However, Creme de Cassis isn’t as refined and nuanced as Chambord. There’s also Creme de Mure, a liqueur made with blackberries that’s really tasty. The flavor reminds us of blackberry jam or jelly, and it makes for a pretty darned good Bramble cocktail.

Why we love Chambord

Chambord is a liqueur that lives up to its fancy name. It contributes a sophisticated, nuanced berry flavor to so many cocktail recipes. For example, it’s impressive in the French Martini, but I think it really shines when mixed with Champagne. And in our humble opinion, Chambord is even better than the Creme de Cassis for making Kir Royale.

How much does a bottle of Chambord cost?

One of my favorite Chambord drinks that puts a new twist on a classic is the Black Raspberry Mojito.

The classic Mojito cocktail has been around for a very long time. However, its exact origins are a bit murky. One strong theory is that it’s related somehow to “mojo,” a popular Cuban seasoning used in foods that are made from lime. Meanwhile, another theory speculates it’s a derivative of the word “mojadito,” which translates from Spanish to English as “a little wet.”

The Mojito was also known as the legendary American writer Earnest Hemingway’s favorite drink. And in 2016, a research agency discovered that the Mojito had become the #1 cocktail in France and Britain.

Another one of the most popular Chambord recipes is the French Martini. This delicious variation of the traditional recipe is something you would have to taste to believe!

The recipe uses vodka, Chambord, and pineapple juice to create a delicious flavor revolution. It’s a far cry from your traditional Martini recipes that often use ingredients like dry and sweet vermouth, gin, and olive juice.

However, the exact origin of the Martini cocktail isn’t clear. The name may come from the Martini brand of vermouth. Another theory suggests the drink was derived from the Martinez cocktail, served during the 1860s in San Francisco at the Occidental Hotel. People stopped by before taking a ferry to Martinez, California.

One of the Chambord cocktails tailor-made for gin lovers is the Bramble. This drink combines gin with the flavors of black raspberry and lemon to create a very refreshing drink that’s not too harsh. And while it may look pretty fancy, it’s really one of the easiest cocktails you can make at home.

The bramble cocktail doesn’t have a deep history, despite some younger folks describing the 1980s as ancient times. The drink was the creation of Dick Bradsell, who worked as the bar manager at Fred’s Club.

The club was an ultra-exclusive private “members only” establishment that once hosted numerous celebrities, such as Naomi Campbell and Boy George.

Dick wished to invent a genuinely British cocktail, and the name Bramble is based on the blackberry bush.

The flavor is like an explosion of dry, bitter, and sweet, with bubbles dancing on your tongue. The rich fruitiness of the Chambord really lets you gain a whole new appreciation for the sparkling wine.

Champagne comes from the region in France known as Champagne. For a century, the area had a reputation for making still wines unrivaled in taste and quality. While the exact origins of sparkling wine remain a mystery, the oldest recorded version of the drink is the Blanquette de Limoux, invented in 1531 by Benedictine monks residing in the famed Abbey of Saint-Hilaire, located near Carcassonne.

The Chambord Spritz is a drink that brings a deliciously fruity and bright flavor to a crisp, dry white wine with a touch of added sparkle from soda water.

Spritz cocktails have become very popular, and it’s not unusual to find them served at many dinner parties and backyard BBQs. These drinks are usually served in oversized wine glasses and consist of a sugary aperitif paired with prosecco ( or white wine) and soda water.

The spritz cocktail recipe goes all the way back to the 1800s and was created in Italy’s Veneto region. Spritz is a German word meaning “splash,” It was given this name because of how Austrian soldiers preferred to prepare the Italian wine they drank. You see, they found the wine to be too strong, so they added still water (a spritz) to make it more palatable. Eventually, the water became sparkling water.

Margaritas are popular drinks that have come to represent relaxation. When people think of sipping Margaritas, they usually imagine themselves on white sandy beaches in Mexico.

Raspberry Margarita combines tequila, Chambord, Triple Sec, simple syrup, and fresh lime with garnishes of raspberries, lime wedge, and Koshar salt (or sugar), to create a brilliant Margarita experience like nothing else!

The original Margarita cocktail consists of tequila, orange liqueur (Triple Sec), and lime juice served in a salt-rimmed glass. Now, when it comes to the origin of this drink, everyone seems to have their favorite. However, no one can say for sure which is true.

My favorite origin story suggests that Daniel Negrete invented the drink in 1936. As a bartender, Negrete worked in Puebla, Mexico, at the Garic Hotel. It’s said he created the Margarita after his girlfriend asked him to make her a Magnolia cocktail. Not wishing to confess his ignorance, Negrete mistakenly used tequila, not knowing the drink was made with gin. When asked, he told his girlfriend that he said he had misheard her and thought she asked for a “Margarita,” Spanish for “daisy.”

This beautiful drink combines Gin, Chambord, Rosato vermouth, and chocolate syrup for an unbelievable experience that really feels like a sweet kiss!

Something magical happens anytime you mix raspberries and chocolate together, and this drink’s no exception. This is the perfect Valentine’s Day cocktail.

When it comes to pretty pink cocktails, few can match the beauty of Chambord Paloma. This drink is made with ice, Blanco tequila, Chambord, lime juice, and chilled grapefruit soda with a thyme sprig for garnish.

This deliciously fruity and sweet drink has a subtle black raspberry flavor that perfectly balances the sour grapefruit and mixes beautifully with the sweet notes in the tequila. And the dryness of the club soda really gives it an interesting impression.

And here’s a video with three sensational Chambord cocktail recipes you simply must try! 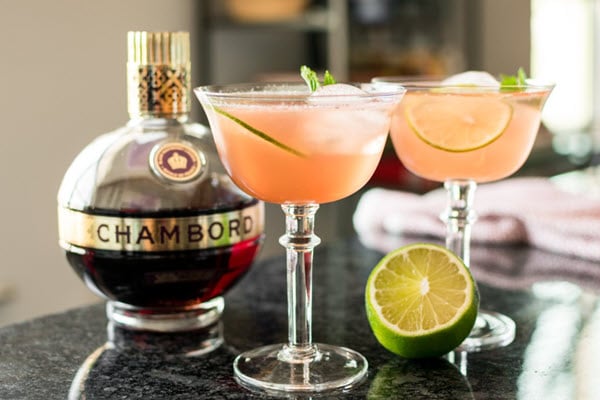 These recipes are sure to please. So, gather your family and friends and enjoy. Let us know your thoughts!
5 from 6 votes
Print Recipe Pin Recipe
Total Time 9 mins
Course Drinks
Cuisine American
Servings 2
Calories 275 kcal

Calories: 275kcal
Keyword black raspberry mojito, chambord cocktails
Tried this recipe?Let us know how it was!