Triple sec cocktails have a reputation for their intense citrus and tropical flavors. In fact, it’s one of the best-selling citrus liqueurs in the world.

Triple Sec liqueur is instrumental in cocktail recipe concepts such as the Margarita and Cosmo. Below, we’ll learn what makes triple Sec drinks so special.

What is Triple Sec?

First, Triple Sec represents a category of dry orange liqueur. It’s a French word that translates in English to “Triple Dry.” In most liquor stores, you can find many makers of Triple Sec. These are typically lower-end versions, with Cointreau being considered among the higher-end offerings.

The word also refers to how the spirit is made using triple distillation to process the neutral alcohol base with the flavoring provided later using the skins of unripened oranges, which are bitter (dry) instead of sweet.

However, there is some dispute concerning the term “Triple Sec,” as Cointreau claims they originated the term. They say “Triple” defines the three types of orange peel they use in their liqueur. They use dried and fresh sweet peels and dried bitter peels. At the same time, the term “Sec” refers to how Cointreau has less sugar compared to other brands. Since the Cointreau is higher-quality than most other Triple Sec brands, it needs less sugar to soften the bite of its rougher spirits.

Triple Sec is based on a neutral spirit derived from sugar beet, a neutral quality source compared to spirits made from wine, grain, or sugar cane. They then steep dried orange peel in the neutral alcohol before re-distilling it. The result is a potent liqueur with an intense orange flavor blended with water, powdered beet sugar, and an additional neutral spirit.

The oranges used in Triple Sec are picked green when they are at the height of their aromatic peak. If the oranges are allowed to ripen, the fruit will draw in the peel’s essential oils, which creates the flavor of Triple Sec.

However, while the French invented the Triple Sec style of liqueur, they were not the first to create alcohol using orange peels. That distinction belongs to the Dutch. The Dutch were the first to re-distill dried exotic orange peels shipped from locales such as Curacao.

How much alcohol is in Triple Sec?

Triple Sec usually contains between 20 and 40 percent ABV (alcohol by volume). However, better quality liqueurs, such as Cointreau, may have an ABV between 38 and 42 percent.

How much does Triple Sec cost?

What is Triple Sec used for?

Triple Sec is used chiefly to make cocktails, although you can drink it straight in the form of shots. And, there are hundreds if not thousands of drinks to make with Triple Sec.

Below, we’ll show you 11 terrific Triple Sec drink recipes that really show off this liqueur’s versatility and outstanding flavor.

The White Lady cocktail is one of those Triple Sec mixed drinks that’s the epitome of sophistication and class. It’s much like a classic sour but adds Triple Sec into the mix to add more of a sweet citrus flavor to the gin and lemon.

This cocktail is well-known as the favored cocktail of the famed comedy duo Laurel and Hardy. Legend has it they drank quite a few of these drinks at the Savoy while touring in London.

The cocktail is believed to be the creation of a famous bartender named Harry McElhone, who’s said to have invented it at the Ciro Club in London in 1919.

This 1920’s drink was named after the place where it was invented, the Pegu Club, an establishment in Yangon, Myanmar. The first mention of this cocktail was in Harry McElhone’s 1923 recipe book. This sophisticated cocktail is a blend of strong citrus notes with a very herbal finish.

The drink also uses two bitters, Triple Sec and Genever and Genever gin with lime juice and a lime twist for garnish.

Sangria is a deliciously bold, fruity, and refreshing drink that’s the perfect balance of sweet and dry. It traditionally uses pieces of fruit such as oranges, pineapple, cranberry, lime, and lemon. In addition, this recipe uses white sugar, chilled red wine, Triple Sec with a splash of brandy (optional). Garnish with an orange slice or lime wedge.

This recipe is sweet but not overpowering like so many Sangria recipes and really celebrates the citrus notes by adding slices of citrus fruits. The red wine also brings a dry sweet flavor.

The Sidecar is a classic drink that came about during World War I between 1914 and 1918. While there are several origin stories for this cocktail, one that people deem the most credible suggests it was invented in Paris, France, by Frank Meir, who worked at the Ritz Carlton hotel bar.

As for its name, the most popular legend is that it’s named after a U.S. military officer who always arrived at the bar in a motorcycle sidecar.

This drink is traditionally garnished with a lemon or lime wedge.

The Cosmopolitan is one of the most famous cocktails globally and has a reputation for class, sophistication, and style. This beautiful drink is a flavorful mix of cranberry juice, Cointreau (or Triple Sec), fresh lime juice, Absolut Citron, with a lemon or lime twist for garnish.

The earliest known version of this drink was found in a recipe book called Pioneers of Mixing at Elite Bars, published in 1934. The drink was referred to as the “Cosmopolitan Daisy” and used only gin and raspberry syrup.

The Margarita is a tequila drink served in a cocktail glass that represents the spirit of “party time.” It’s a drink you think of as you imagine yourself sitting on a beautiful Mexican beach. This version adds notes of citrus using Triple Sec.

As for its origins, there are many versions, as with so many cocktails. However, the most popular source credits a bartender named Daniel Negrete, who in 1936 accidentally invented the drink after his girlfriend ordered a drink called the “Magnolia.”

Danny knew some of the ingredients but didn’t know that the gin made the Magnolia. So instead, he accidentally used tequila. And when his girlfriend pointed this out, he smoothly lied, saying he thought she asked for a “Margarita.”

When it comes to boozy cocktails with a reputation for sitting you down hard, few match the potency of the Long Island Ice Tea drink. This cocktail traditionally uses several spirits, such as tequila, rum, vodka, gin, and Triple Sec. And ironically, it doesn’t contain tea as an ingredient!

Despite the number of spirits, this drink goes down real smooth in a chilled highball glass.

A cocktail with a classy yet very suggestive name is Between the Sheets with lots of character and a sassy, bright, and citrusy flavor.

This tangy drink is a twist on the classic Sidecar that includes white rum, Triple Sec, Cognac, and lemon (or lime) juice for a unique experience.

The Mimosa has become a standard drink for just about any brunch, baby, or bridal shower. This delicious, celebratory drink is usually made by mixing orange juice with champagne. However, this version adds Triple Sec for a more robust, crisper citrus taste that packs a bit more of a wallop.

You can also substitute the champagne for Prosecco, which offers a slightly sweeter and more nuanced flavor.

Garnish with an orange, lemon, or lime slice.

When most folks think of Martinis, they think of the traditional “James Bond” recipe that uses gin, vodka, dry vermouth, and a lemon peel. And, of course, it’s shaken in a cocktail shaker, “not stirred.”

However, many different kinds of Martinis offer a much sweeter and more flavorful experience, such as the Pomegranate Martini that uses vodka, Triple Sec, pomegranate juice, sugar, fresh orange, with the option of pomegranate arils.

You can use orange, lime, or lime slices for garnish.

The aqueduct is an exciting cocktail that uses the flavors of apricot brandy, lime juice, vodka, and Triple Sec (or Curacao) for a deliciously unique flavor.

As for its name, some believe that it was initially made with Blue Curacao, which gives the drink a beautiful green/blue water appearance reminiscent of the aqueducts in ancient Rome.

Also, here’s a video showing how to make another one of the most popular Triple Sec recipes called the “Kamekaazi.”

Garnish with a lime or lemon twist. 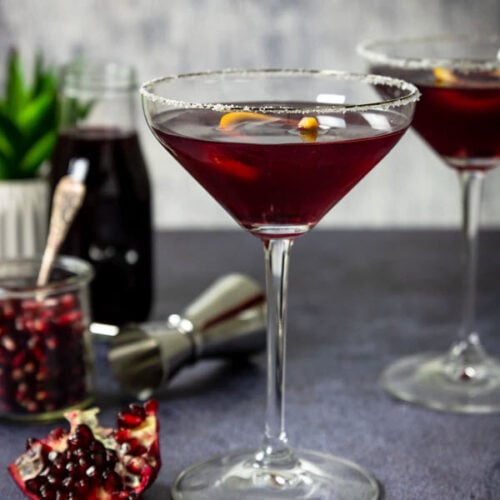 These recipes are sure to please. So, gather your family and friends and enjoy. Let us know your thoughts!
5 from 7 votes
Print Recipe Pin Recipe
Total Time 14 mins
Course Drinks
Cuisine American
Servings 1
Calories 245 kcal