Do you love a good ginger ale cocktail? If you’ve grown to enjoy ginger ale mixed drinks, you probably want to go beyond a simple rum and ginger ale.

Ginger ale started with ginger beer, which was invented in 1851 in Yorkshire, England. however, the first ginger ale comes from Ireland, and it was a soft drink that didn’t have alcohol in it. To get the carbonation in ginger ale, carbon dioxide is added. That’s where the delightful fizz comes from.

If that sounds like you, then we’ve got exactly what you need: the perfect list of ginger ale drinks. From a ginger ale alcohol drink such as a ginger punch, a gin buck, or whiskey ginger to ginger ale non-alcoholic drinks like the Shirley Temple, there’s something for everyone who likes ginger ale cocktails on this list.

You can mix ginger ale with any liquor to create an easy highball cocktail. What is a highball? Essentially, a highball is any cocktail that has more non-alcoholic mixer than it has liquor.

Can you substitute ginger beer for ginger ale (or homemade ginger ale) in alcoholic drinks with ginger ale? Technically, you can use ginger beer, but the flavor difference between ginger beer and ginger ale is so drastic that it completely changes the cocktail to something different. If you like ginger beer, it’s best to find some great ginger beer mixed drinks.

What alcohol goes with ginger ale? The answer is simple: nearly everything, from vodka, whiskey, rum, and beer! It’s all about how you mix it. Let’s check out 13 ginger ale cocktails.

We love the flavor of hibiscus in soothing hot tea, but you can also bring this delicious fruity flavor to a holiday punch recipe.

Also, if you use ginger ale or sparkling water, you can make this a non alcoholic ginger ale drink, so it’s a win/win.

Add some fresh ginger or real ginger for flavor, and if you want to spike this ginger ale cocktail up more, use rum or vodka.

It seems almost unfair to call this yummy drink recipe a Grumpy Old Man because it’s a totally charming cocktail.

To make this ginger ale drink, you need a big shot of bourbon, ginger ale, and fresh lime juice (or fresh lemon juice).

This bourbon drink is the perfect alternative to cocktails like the Moscow Mule, which uses vodka. The Moscow Mule also uses ginger beer, not ginger ale.

What type of bourbon should you use in this bourbon drink? Try Makers Mark or Jim Beam Kentucky Straight. However, any type of good bourbon is perfect for this drink.

Do you want a fizzy holiday ginger ale cocktail? This cranberry rum ginger ale mixed drink will bring smiles to the faces of your guests (and you!).

Silver rum provides the boozy kick for this drink, but in a pinch, you can use vodka, too.

Garnish your cranberry cocktail with fresh cranberries or frozen cranberries.

Perhaps the most well-known non alcoholic drink recipe, the Shirley Temple is named after the beloved and adorable child star, Shirley Temple.

Here’s a fun fact: Shirley Temple didn’t like this carbonated drink cocktail that was named after her. She said that the Shirley Temple’s sugar taste is “too sweet.”

The classic Transfusion cocktail is made with vodka, Concord grape juice, and ginger ale.

For the Transfusion cocktail, you need good vodka and fresh lime juice. Concord grape juice is absolutely essential for this mixed drink. Concord grapes have a sweet flavor and they’re a deep blue-purple color.

Serve your Transfusion cocktail in a highball or martini glass. Garnish with a lime wedge and a Luxardo cherry or maraschino cherry.

The beloved Pimms Cup cocktail is bubbly and refreshing. This interesting mixed drink features sparkling lemonade (or ginger ale) and Pimm’s No. 1 liquor.

A popular British highball cocktail recipe, the Pimm’s Cup is a great cocktail to whip up when you’re entertaining.

Traditionally, a Pimm’s Cup is served in a highball or rocks glass or other cocktail glass. Garnish your Pimm’s Cup with cucumbers, mint leaves, or strawberries.

The whiskey ginger cocktail can be made with any type of bourbon or whiskey.

This easy whiskey drink recipe (or bourbon drink) has just three ingredients and you can whip it up in minutes.

You can use any type of whiskey in this whiskey cocktail, from your favorite bourbon to Irish whiskey.

If you’re just starting to explore whiskey, this is the perfect starter drink. It’s nice and sweet for a whiskey drink, thanks to the ginger ale.

Serve your whiskey (or bourbon) ginger in a highball or other tall glass with ice cubes and garnish your whiskey cocktail with a lime wedge or lemon peel.

The classic Long Island Iced Tea recipe was supposedly invented by a Long Island, New York bartender in 1972 and this classic cocktail is famous for having five different types of liquor in it: vodka, tequila, gin, rum, and orange liqueur (Triple Sec or Cointreau).

For the Blue Long Island Iced Tea, you substitute gorgeous Blue Curacao for the Triple Sec, giving your cocktail a beautiful blue color.

You can use ginger ale or lemon lime soda (Sprite or 7-Up) to mix this gorgeous drink. Garnish this drink with a beautiful edible flower, fresh mint leaves, and a lemon wedge.

If you’ve got a bottle of your favorite gold tequila sitting around just waiting to be used, you can create a delicious tequila and ginger ale cocktail.

Think of the tequila and ginger ale as a margarita for folks who love ginger ale.

This cocktail is best made with gold tequila, but you can use white tequila, too.

Serve this tequila and ginger ale cocktail in a glass with a salted rim and garnish it with a lime wedge.

If you love a Dark and Stormy recipe made with ginger beer, then this cocktail that’s made with dark rum (or aged rum) and ginger ale will delight you.

In this cocktail, the ginger flavor is much more subtler than the flavor from ginger beer, and it blends beautifully with the dark rum.

Serve this dark rum and ginger ale cocktail with ice cubes. Squeeze some lime juice into the cocktail and garnish the glass with a lime wedge.

This list of ginger ale cocktails has several drinks that can be made non-alcoholic. This mimosa mocktail is one of them.

A mimosa is a classic celebratory mixed drink that is usually enjoyed in the morning for brunch and made with champagne and orange juice.

However, if you use ginger ale or sparkling water, you can easily create a non-alcoholic version of the classic mimosa.

Serve your mimosa mocktail in a champagne glass and garnish it with a strawberry, cherry, and orange slice.

Does it get any simpler than this? Vodka and ginger ale sounds like a great idea to us!

All you need for this easy and refreshing ginger ale cocktail is some good vodka and ginger ale.

Put your ginger ale and vodka into a cocktail shaker and shake it until it’s very cold, Then, serve it in a tall glass with ice cubes.

Garnish your vodka and ginger ale with a lime wedge or fresh mint leaves.

Exactly what is a shandy? A shandy is a cocktail that was invented in the mid-1800s in England. The word “shandy” is from the old English word “shandygaff,” which is what people back in the day called a beer that’s mixed with either ginger ale or ginger beer.

In French, you will occasionally see a ginger ale shandy called the Panache.

To make a ginger ale shandy, fill your glass with ice cold light beer until it’s half full. Then, top the beer off with your favorite ginger ale. You can substitute something like 7-Up or Sprite (or any lemon lime soda) for the ginger ale if you wish. 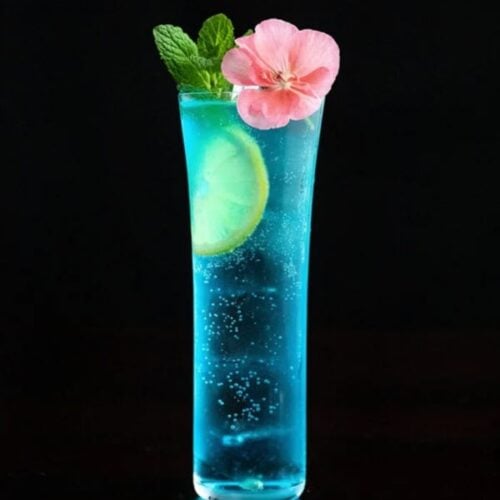 These recipes are sure to please. So, gather your family and friends and enjoy. Let us know your thoughts!
5 from 5 votes
Print Recipe Pin Recipe
Total Time 9 mins
Course Drinks
Cuisine American
Servings 1
Calories 310 kcal