If you don’t drink alcohol or play the role of the designated driver while out with friends, it’s likely you’ve felt a bit left out by all the “festivities” while your friends enjoyed their alcoholic cocktails. Well, rest easy because there are tons of non alcoholic drinks recipes known as mocktail recipes out there to make you feel like you are a part of the party.

Now “what is mocktail?” you might ask. Mocktails are non alcoholic cocktails that taste just like their alcoholic counterparts. 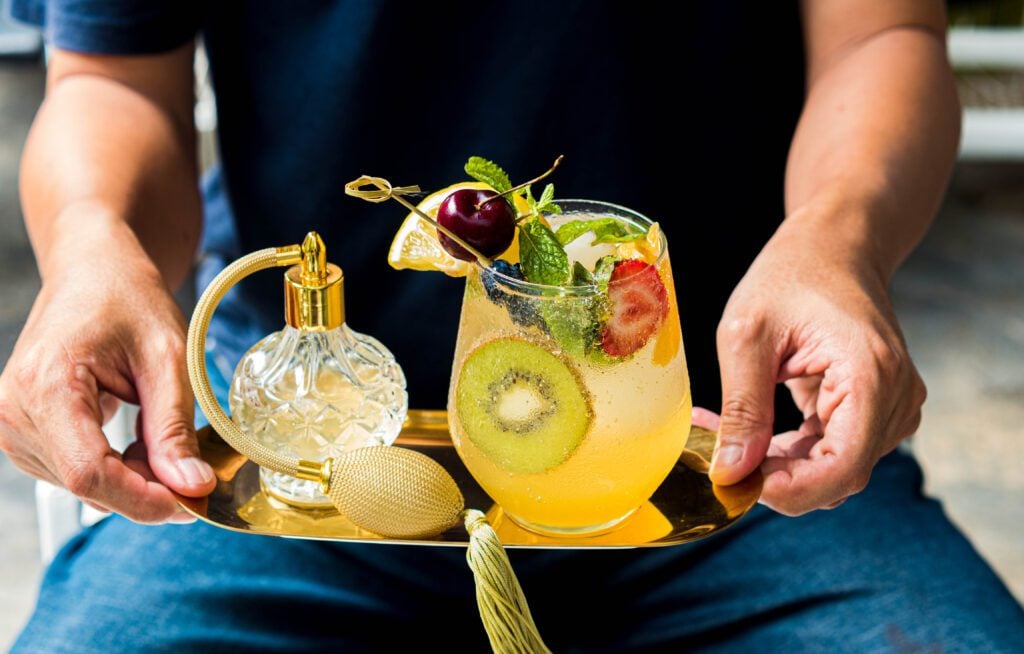 Just about any mixed drink can be made into a mocktail with a few adjustments.

Below, we’ve put together 11 of the best mocktail recipes out there that you can make in the comfort of your own home. 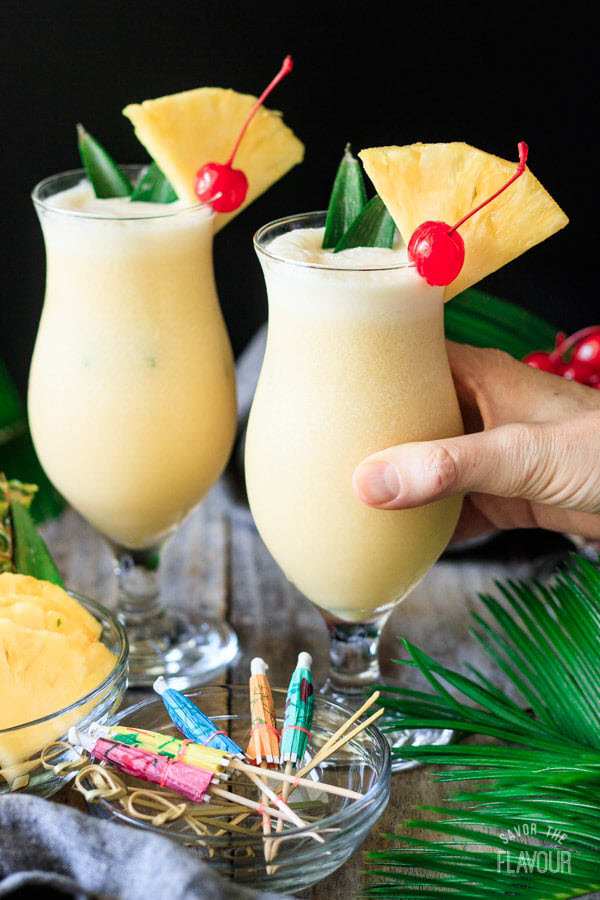 Are you craving a taste of the Caribbean? Pina Colada Mocktail is one of our favorite non alcoholic drinks.

This drink packs all the tropical flavors we love, like pineapple and coconut, into a satisfying experience that makes you feel like you’re sitting on a beach in Hawaii.

Plus, it looks absolutely fabulous with its creamy white color, not to mention its fragrant sweet smell.

This drink has a sweet, warm, and vibrant taste, with the pineapple being the most prominent flavor while you taste a hint of coconut in the background.

Now this recipe, as is the case with many mocktails, requires a blender.

You can also make your drinks a bit sweeter if desired by adding maple syrup and tangier by adding lime juice.

Traditionally, these drinks are served in tall 16-ounce glasses that are chilled in the freezer before pouring.

For your garnish, use a pineapple wedge, maraschino cherry (with stem), pineapple leaves, and don’t forget the little umbrella! 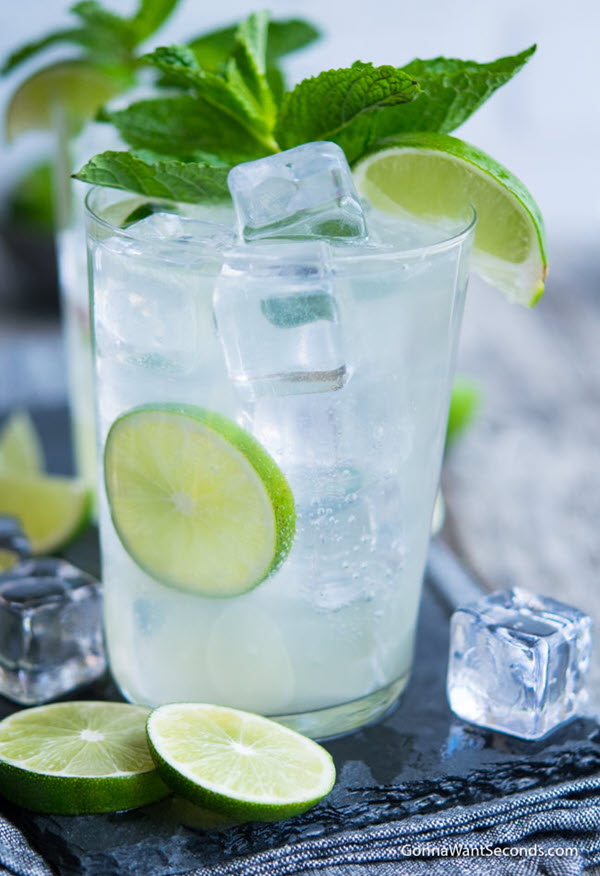 The Lime Rickey mocktail is a bubbly drink that’s no less refreshing than its alcoholic version. These drinks are derived from the classic Gin Rickey, although some folks think the alcoholic Lime Rickey is the same drink. However, the Gin Rickey uses gin while the Lime Ricky mainly uses vodka.

Looking back, the Gin Rickey has a colorful history. It’s a highball cocktail that mixes soda water, gin, and lime juice. However, in the 1880s, when the drink was invented, that version used bourbon, before gin became the popular spirit to use in the 1890s.

As for the name, the story goes that the drink was created by a Democratic political figure named Colonel Joe Rickey one day at a local bar in Washington D.C. Soon the drink gained worldwide popularity and is even referenced in books like the classic 1920’s novel The Great Gatsby by F. Scott Fitzgerald.

It’s also recommended that you use a good quality cocktail shaker for this drink. Trust us. It does make a difference. 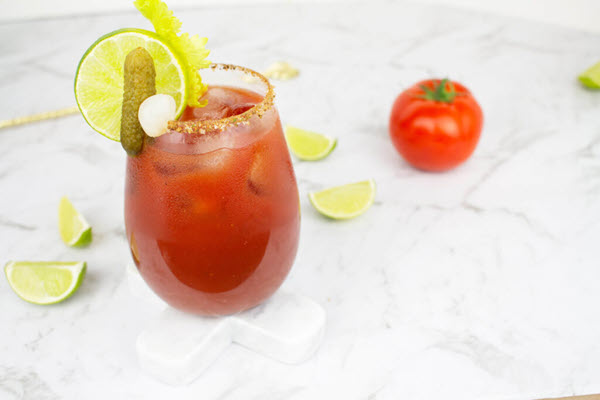 The Bloody Mary mocktail has the distinction of being perhaps the world’s most well-known mocktail, on par with the Shirley Temple. In fact, many folks might not even know there is an alcoholic version of this drink!

You see, for a long time, Bloody Mary mocktails have had the reputation of being a perfect “hangover” drink to serve the morning after drinking alcohol, as the spicy drink is said to have a sobering effect -by the way, it’s not true.

However, I suppose setting your mouth on fire with a drink laced with lots of hot sauce can get the adrenaline going a bit, giving one something else to focus on other than a screeching headache.

The virgin Bloody Mary has a savory, spicy, and salty flavor, minus the spirits, just like the alcoholic version.

The drink itself was invented in the 1920s as a combination of vodka and tomato juice and remained a classic brunch drink. The powerful spices and ingredients in Bloody Marys make it pretty hard to tell whether or not it has alcohol (until you feel the alcohol, that is). 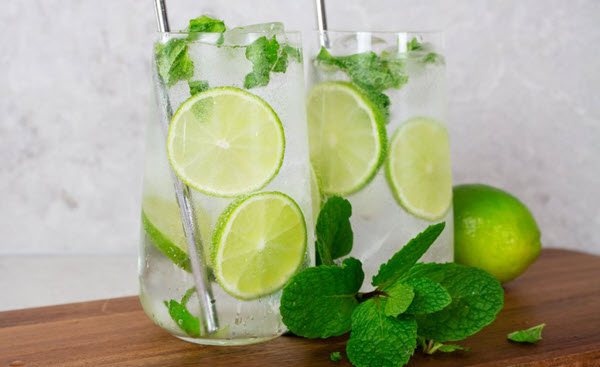 Virgin Mojito mocktails have all the refreshing minty flavor of the alcoholic version without the rum, making it one of the best mocktail drinks you can whip together.

As for the mojito’s origins, the original cocktail is believed to have been invented in Havana, Cuba, and remains one of the most popular cocktails globally.

However, it’s unclear exactly when or where the drink was first derived, as some folks say it dates back as far as the 1500s, while others claim the drink was invented in the 1800s when the Bacardi rum company was founded.

The cocktail gained more notoriety in the 1930s when the legendary author Ernest Hemingway helped make it a household name.

One of the best things about virgin mojitos is that they are straightforward to make with no bartending skills needed.

The ingredients for these easy mocktails include lime, mint leaves, the sweetener of your choice (we used monk fruit), sparkling water, with the option of using non-alcoholic rum for a more authentic flavor.

Your garnishes include lime wedges or slices and mint leaves. 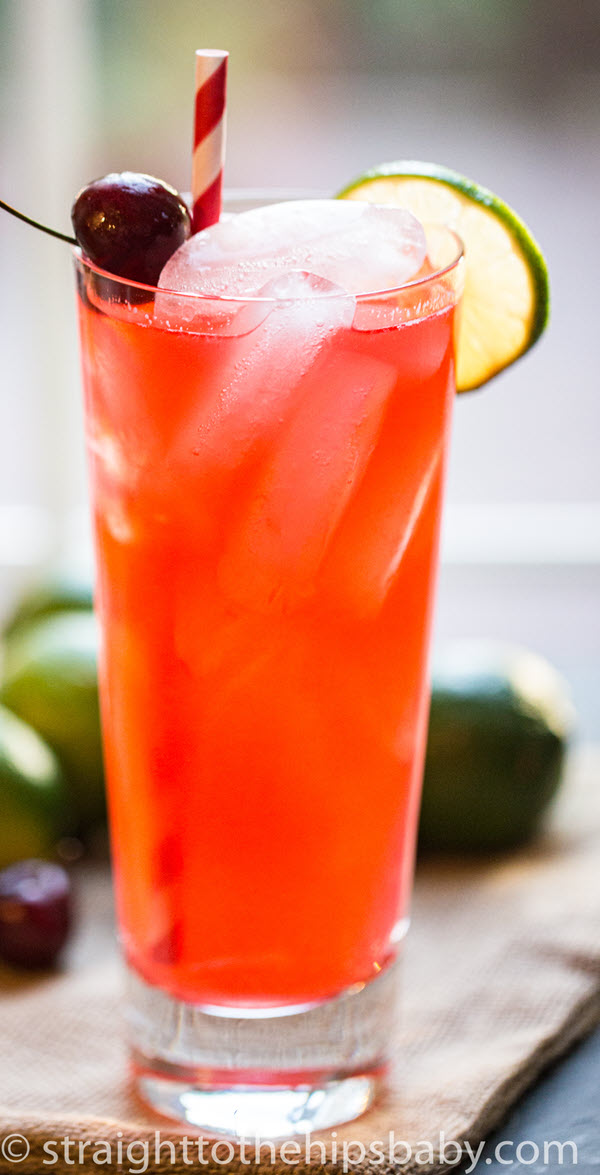 The Cherry Lime Rickey is another one of those delicious mocktails you can make for your guests or just as a nice non-alcoholic treat for yourself.

Now, we should tell you that the steps to making a really good cherry lime rickey are a bit more involved than most mocktails. However, as you’ll see, it’s nothing you’ll need a chemistry degree to make.

The combination of the sweet and tart cherries along with lime is a match made in heaven as the citrus perfectly complements the sweet notes of the berry.

Now, you can also use a commercial cherry syrup, but trust us, the simple homemade syrup tastes so much better! 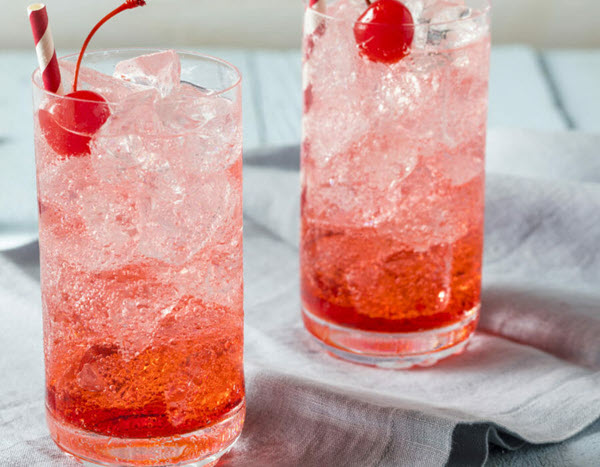 By far, one of the most famous mocktails on the planet is the Shirley Temple, which is the only mocktail on this list that was invented as a true mocktail.

The drink was invented during the 1930s to celebrate the famous child actress Shirley Temple. Interestingly, Shirley Temple herself didn’t like them because she considered the drinks “too sweet.” Go figure, right?

Now, the modern versions of this drink use lime sodas like sprite, which are often loaded with sugar. However, this recipe uses the classic version of ingredients that give the drink a sweet but more nuanced flavor.

The ingredients for this mocktail recipe include ice, grenadine, lemon juice, and ginger ale.

A common mistake people make is thinking grenadine syrup is cherry flavored when it’s actually made with pomegranate juice. The word “grenadine” is derived from the French word for pomegranate.

We also recommend using clear ice if possible for this drink, which really enhances its appearance. 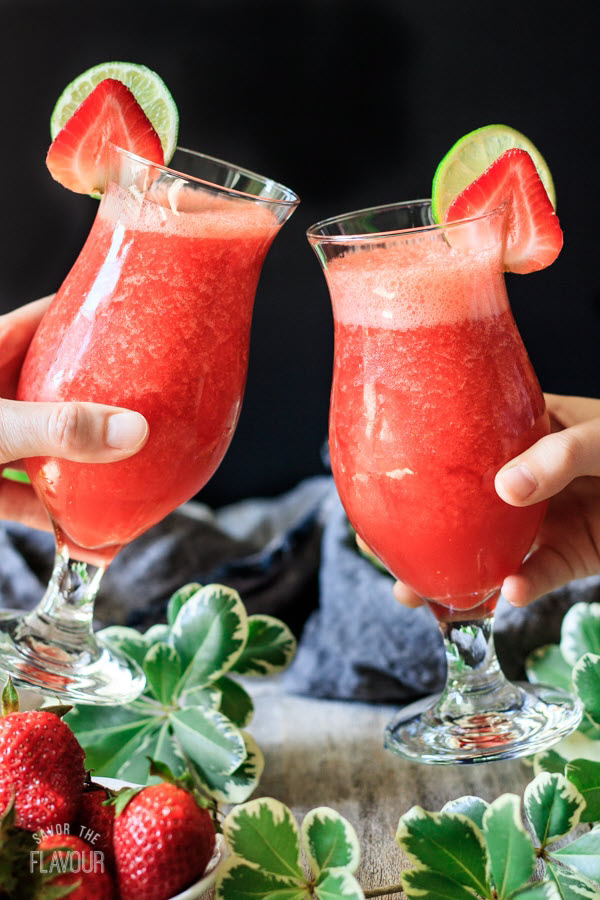 If you’ve ever taken a trip to New Orleans, then it’s likely you know about the delicious cocktails known as daiquiris. These drinks are usually served frozen, and the cocktail version uses rum as the main spirit.

However, while this drink is a New Orleans’ favorite, the drink was actually invented in Cuba in the 1800s. The original daiquiri was not frozen but shaken, stirred, and served in a cocktail glass.

The frozen versions came along later, blending the fruit, rum, and ice, and there are tons of flavors to choose from, such as mango, strawberry, blueberry, pineapple, and cherry, just to name a few. 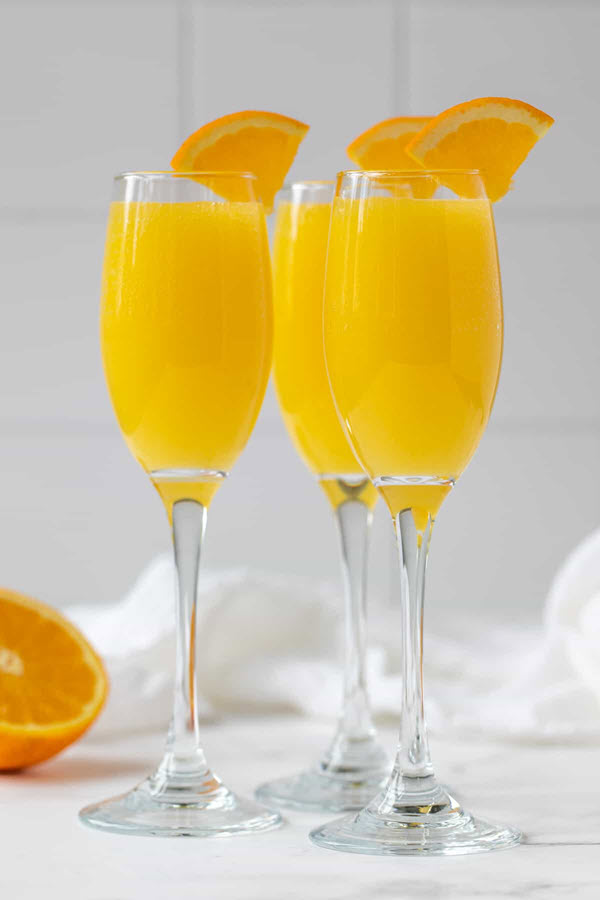 Mimosas are legendary cocktails that are usually served at events such as baby showers and brunches. However, they can also make for amazing virgin drinks you can make for the entire family, including kids.

The original mimosa cocktail was likely created back in the 1920s in Paris, France, at the famous Ritz hotel. The original recipe’s pretty basic with two ingredients: champagne and orange juice.

Now, the best orange juice for mimosas is always fresh, but you might not have the time or desire to squeeze that many oranges for a crowd. The next best option is picking your favorite premium orange juice that has no pulp. And always avoid the concentrated stuff.

The ingredients for this recipe include sparkling lime water, orange juice, with one orange as an optional garnish.

And you can also use ginger ale, and since it’s not for mixing with a high-quality liquor, it’s perfectly fine to use mid-range ginger ale for this recipe. In fact, we found the ginger ale gives this drink a rather interesting flair. 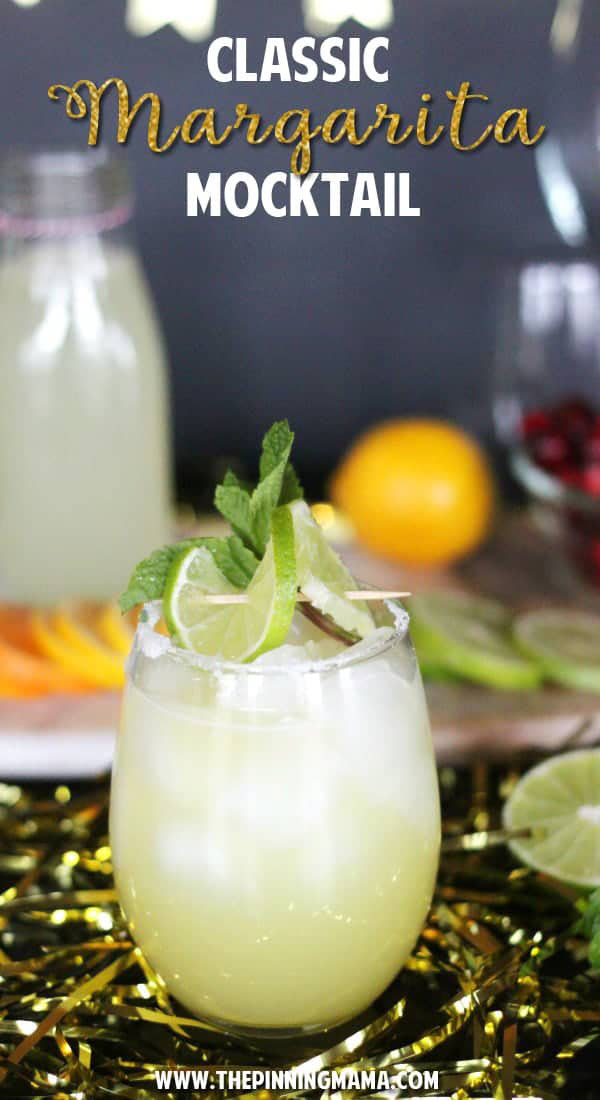 Another one of our favorite mocktail drinks is the margarita mocktail. This recipe closely follows the traditional formula of the classic margarita cocktail but adds a unique ingredient to the mix, minus alcohol, of course.

Margaritas are sweet, salty, with a somewhat dry flavor due mainly to the salt and tequila. The history of this drink goes back to 1942, when Pancho Morales, a truck driver for an El Paso, Texas-based company called Price’s Creameries, is said to have invented the Margarita that summer at a bar called Tommy’s Place (which today is a curio shop) located on Juarez Avenue. Morales is also credited with inventing the Conga Cooler cocktail.

Before Jaurez immigrated to the U.S., he’d been one of Mexico’s top bartenders for 21 years, and he also taught at his union’s bartending school in Jaurez.

The name actually comes from a mispronunciation. When Jaurez tried to recreate a drink called the Magnolia for a lady friend, which contained some lime, Cointreau, and alcohol, Jaurez didn’t know what liquor to use, so he used tequila.

Later, after tasting the drink, she told him it didn’t taste like a Magnolia, but it was still “very good.” A bit embarrassed, he then said to her that he thought she said “Margarita,” which is daisy in Spanish.” He said he was thinking of the flower margarita, which is similar to the magnolia flower. 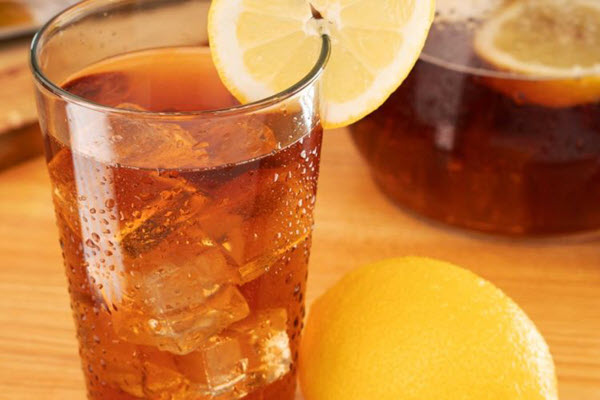 The Arnold Palmer is another one of those virgin drinks that never had alcohol. While he probably wasn’t the first person to come up with the idea, former professional golfer Arnold Palmer is credited for inventing the drink which combines lemonade with iced tea.

It’s said that Palmer loved the combination and would often order it, and after a woman at the same bar ordered “that Palmer drink,” the rest is history. This classic drink grew in popularity worldwide, especially among golfers.

Lemon and mint are the most common garnishes for this drink.

And you can also use sparkling water to make your lemonade to create a Sparkling Palmer or make strawberry, raspberry, or pink lemonade to make a Pink Palmer. 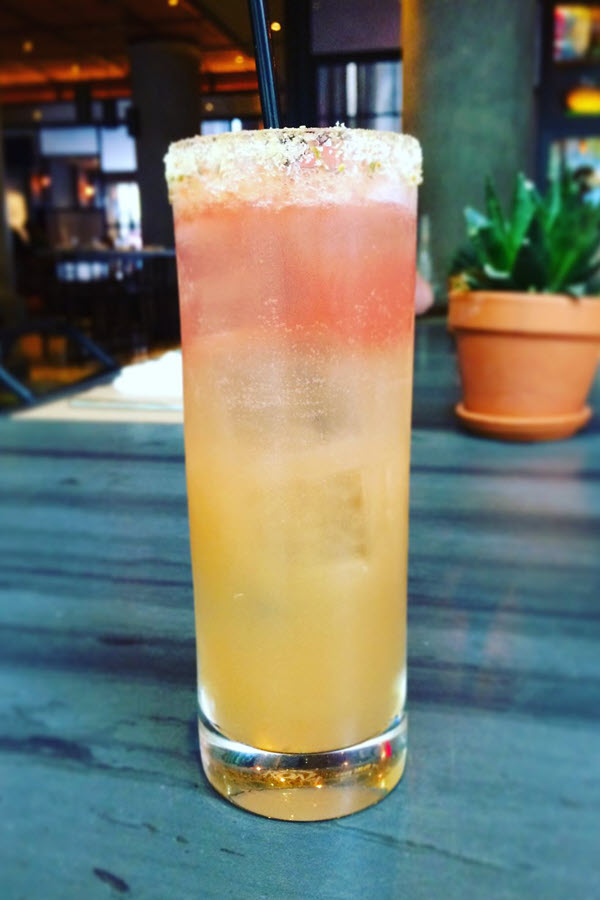 In our humble opinion, the Nopaloma is one of the best mocktails you’ll ever try. The drink combines fresh-squeezed grapefruit juice, freshly squeezed lime juice, agave nectar, salt, and club soda to create one magical mocktail experience that looks as good as it tastes!

You can also find more tasty mocktail recipes in the video below.