Nothing has as sweet and delicious of a flavor as rumchata. If you haven’t had it, it’s worth going to your closest liquor store to pick up a bottle and give it a try.

Most of the time, hosts are happy serving simple cocktails from their home bars. After all, there’s nothing wrong with a Cuba Libra (rum and coke with a lime wedge), a martini, or a margarita. However, sometimes it’s fun to serve something completely unique, and that’s where drinks such as rumchata come into play.

It is an amazing drink that tastes just like horchata, but with the kick of rum which is what makes these rumchata drinks so tasty.

Rumchata recipes can be pretty simple to make so you don’t have to spend all your time at the bar whipping up some cocktails for your friends.

You can actually have rumchata shots all on its own and it doesn’t taste nearly as bad as other liquor shots.

But ideally, you want to make some rumchata cocktails that taste sweet but have just enough alcohol to balance out the rumchata flavors.

Learn some more about rumchata so you can make your own rumchata mixed drinks at home and you won’t have to spend an arm and a leg to have a delicious drink.

Exactly What Is RumChata?

Rumchata is a delicious sweet horchata drink that is also mixed with rum.

It is really just like regular horchata but with some added kick of rum which makes it extra tasty and worth drinking on its own or in mixed drinks.

Rumchata was actually first made by the same people who make Bailey’s Irish Cream, so you can expect some of the same flavors between these two drinks.

Rumchata and Kahlua are similar in both flavors and consistency which make them both great cream liqueur.

While not everyone would think of mixing their rum with horchata, it is a really good combination that tastes better than you’d expect.

Even though rumchata is associated with Mexican-style drinks because of its flavor combination, it was actually made in Wisconsin by Tom Maas.

Many people say the rumchata ingredients have a very similar taste to cinnamon toast crunch and there was even a shot invented with Fireball called Cinnamon Toast Crunch.

What to Mix With Rumchata?

Rumchata can go great on its own but having rumchata mixers with other ingredients and flavors, you get the most out of your rumchata.

It has a creamy texture that is thick enough to mix with some stronger or more bitter alcohols so you can get a tasty cocktail out of it.

Rumchata cocktails tend to go well with tequila because of their citrus flavors and strong kick.

It can go great as an after-dinner drink too so mixing it with some vodka and creating a hot chocolate of sorts will really make you crave a couple.

Rumchata has hints of cinnamon and vanilla and it tastes like a thicker version of regular horchata.

This makes it great for cocktails because you can add some juice or other ingredients to counter the strong flavors if you want something more subtle with your drink.

Rumchata also has a very sweet flavor so you don’t have to add in any sugar when making your rumchata drinks.

There is a little bit of alcohol in each drink and it goes down pretty smooth, but you can taste the flavors and aroma of it.

If you love sweet cocktails as a dessert to your meal or to end the night right before bed, the list of rumchata drink recipes below will absolutely quench your thirst.

If you’re not a fan of dark chocolate you have to try this white hot chocolate rumchata recipe.

It’s the same classic taste as hot chocolate but it has a light and creamy texture that makes you feel like you’re drinking something sweet and healthy when really it’s quite the opposite.

Garnish this with whipped cream, shaved white chocolate, or marshmallows to make it pop out even more.

A crockpot is really the way to make this in batches so your entire party can have a taste.

If you’re wondering what do you mix with rumchata you have found the perfect answer in the Cinnamon Toast Crunch shot.

This rum chata mixed with Fireball drink tastes just like the leftover milk inside your cereal bowl after eating Cinnamon Toast Crunch cereal.

Creamy, sweet, and delicious, make sure everyone who has a taste stays at your place for the night because it will be hard to just have one.

It’s great to have at parties when you want a drink you know everyone will love and you can even make a cinnamon toast crunch cocktail.

One look at this mouth-watering creation and guests will be asking why you haven’t made this caramel rumchata hot chocolate before.

People who want something sweet and familiar to drink will love this hot chocolate recipe because it tastes just like everyone’s favorite cold weather classic but with the addition of wonderful flavors like cinnamon and vanilla.

This is also great for those who don’t feel like putting on their winter clothes to go grab a coffee or hot chocolate from the local coffee shop.

With this recipe, you can make it right at home and let everyone add their own toppings like whipped cream, caramel sauce, and dark chocolate shavings. It even goes great on ice cream!

When it’s late afternoon and you want a pick me up but you’re also getting ready to go out, make yourself a RumChata Coffee.

The vanilla and cinnamon flavors of the RumChata will go perfectly with the coffee you add in. It will give you just the jolt of energy that you need to get going without having to stay in for the night.

Don’t settle for regular cream when you need something a little extra with your coffee, add in some RumChata and you’ll be amazed at how good it tastes. You can even make it with iced coffee and it’s still just as good.

One look at this mouth-watering creation and guests will be asking why you haven’t made this caramel rumchata hot chocolate before.

People who want something sweet and familiar to drink will love this hot chocolate recipe because it tastes just like everyone’s favorite cold weather classic but with the addition of wonderful flavors like cinnamon and vanilla.

This is also great for those who don’t feel like putting on their winter clothes to go grab a coffee or hot chocolate from the local coffee shop.

With this recipe, you can make it right at home and let everyone add their own toppings like whipped cream, caramel sauce, and dark chocolate shavings. It even goes great on ice cream!

It’s hard to improve on the classic white Russian but when you add in some rumchata, it transforms the old into something even better.

Instead of having your white Russian taste like coffee and cream, it will now have sweet notes of cinnamon sugar and vanilla.

You’ll love this drink in the wintertime when the flavors really go perfectly with the weather.

This cocktail recipe is perfect for those who love drinks like the Mudslide but don’t always enjoy drinking them because they aren’t sweet enough.

There’s nothing wrong with serving up some rumchata shots all on their own, but if you really want to impress your guests, give them this pumpkin rumchata pudding shot.

The shot will taste like pumpkin pie because it’s deep and rich just like the pie itself with added sweet notes of vanilla, cinnamon, nutmeg, and allspice.

It’s perfect for those who want to drink something warm during the wintertime or if you want to wet your whistle before heading out to a winter party.

You can also serve this shot with whipped cream on the top to really make it pop.

Rumchata with coffee is fantastic but when you really want to get the party started, add in some vodka.

This Rumchata spiked coffee is perfect for those who have the afternoon off and want something comforting to get them through the day.

It will also help you not fall asleep right away and enjoy yourself instead of putting you right to bed after drinking.

Heck, if you have the day off you could even try one in the morning and still have enough energy to make it through dinner.

Simple, easy to make, and delicious, this vodka chata recipe uses vodka and the wonderful taste of rumchata to make a strong drink that will signal the end of the night.

It’s one to go out on because it has a wonderful mix of flavors but it also gives you the kick you need to know it’s time for bed.

This drink is more of a one and done so don’t go overboard by serving yourself a couple of glasses.

The best part is just how easy it is to make, you won’t have to spend any time whipping it together.

When the carols are harking and the bells are ringing you know it’s time for eggnog.

Traditional eggnog is delicious but even better are Rumchata Eggnogs.

The creamy texture of the drink pairs perfectly with the smooth vanilla, cinnamon, and nutmeg flavors that come along with it.

It’s perfect for those nights when you’re staying in on a cold night to watch movies or play board games with family or close friends.

Next time you’re in the mood for eggnog, add a little something to the tradition and make yourself a RumChata Eggnog.

This rumchata martini is perfect for those who want something to drink during the holiday season.

Rumchata and chocolate go together like peanut butter and jelly so why not mix them together?

You’ll enjoy this Rumchata peppermint bark martini because it has a nice creamy texture for those cold nights and tastes just like Christmas with the added taste of peppermint.

It’s perfect when you have guests over for the winter holiday season so you can give them a gift of pleasure. 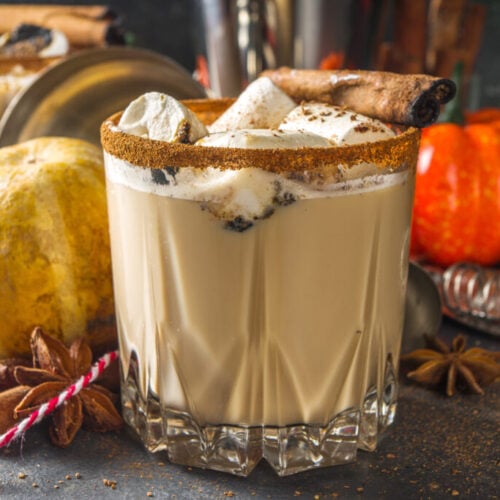 These recipes are sure to please. So, gather your family and friends and enjoy. Let us know your thoughts!
5 from 8 votes
Print Recipe Pin Recipe
Total Time 15 mins
Course Drinks
Cuisine American
Servings 2
Calories 275 kcal