In the world of cocktails, grapefruit and grapefruit juice are the underdogs. We think that’s unfair, so we wanted to come up with a list of refreshing grapefruit cocktail ideas.

Most food historians agree that the grapefruit likely originated in the country of Barbados. Grapefruit appears to be a hybrid of a fruit called the shaddock. In the West Indies, grapefruit became hugely popular before it made its way to the United States. Grapefruit is also popular around the world.

Maybe you want a classic grapefruit drink like the Paloma or the Greyhound. On the other hand, trying new drinks with grapefruit juice is lots of fun, too, so why not mix up your cocktail rotation with a Pink Grapefruit Martini or the Great Gatsby (see the bonus video at the bottom of this article).

Are you ready to discover some of the most beloved classic and contemporary grapefruit juice cocktails? Let’s dive into this refreshing grapefruit cocktail recipe list.

A classic Negroni cocktail is a Campari cocktail with an Italian vibe.

Negroni cocktails are jewel-toned and gorgeous, so making this classic cocktail with grapefruit juice makes a lot of sense.

Traditionally, a Negroni recipe calls for dry vermouth, gin, and Campari, and we love this one that’s made with grapefruit juice.

You’ll make your grapefruit juice Negroni the same way, but you can use Aperol instead of the bitters. Also, some fresh lemon juice (or bottled lemon juice) makes this beloved and refreshing cocktail even more citrusy.

The Salty Dog is a well-known grapefruit mixed drink that can trace its origins back to the 1920s.

You can make a Salty Dog with gin or vodka. Pink grapefruit juice makes the Salty Dog extra special, and to make it slightly sweeter, you can use simple syrup, agave syrup, or maple syrup.

You can make your own simple syrup, or you can buy simple syrup already made at the grocery store.

Garnish your Salty Dog with a lime wedge.

Who hasn’t heard of the refreshing Sea Breeze? The Sea Breeze tart grapefruit cocktail is a grapefruit alcohol drink that is as gorgeous as it is delicious.

Along with grapefruit juice, the Sea Breeze recipe also calls for cranberry juice and vodka.

If you want to make this grapefruit juice cocktail recipe just a little sweeter, you can add a drop of grenadine syrup, simple syrup, or agave syrup. When this sweet cocktail was first created, it was made with gin and grenadine syrup.

Traditionally, the Sea Breeze is enjoyed in a large glass with ice cubes or crushed ice. Garnish with a lime wedge.

When you combine grapefruit juice with tequila, you have a classic Mexican cocktail called a Paloma. The word “Paloma” means dove in Spanish, and we think this cocktail is just as sweet.

All you need for a classic Paloma are two ingredients: grapefruit juice and tequila. However, we love this version because it’s sweeter and has some nice fizz.

Serve your Paloma over ice cubes or crushed ice in a cocktail glass with a salted rim. Garnish with a maraschino cherry.

The vodka martini is a classic cocktail that can be made more exciting with some tangy grapefruit juice.

This pink grapefruit martini is perfect for hot summer evenings or afternoons.

Add all of the ingredients to a cocktail shaker with ice cubes and shake vigorously. Strain your vodka martini into a martini glass.

With the famous Hemingway Daiquiri, you get a refreshing spin on a classic daiquiri that includes maraschino liqueur, lime, rum, and grapefruit juice.

The Hemingway Daiquiri drink recipe originally called for double the rum and no sugar. However, the owners of El Floridita changed it up a bit to make it taste better.

The classic Brown Derby cocktail is a retro mixed drink that hails from the 1930s.

The Brown Derby gets its name from the Hollywood, California restaurant where it was invented. In Los Angeles, the Brown Derby was a chain of restaurants whose buildings were shaped like brown derby hats.

In cocktail books from the 1920s, a similar cocktail named the De Rigueur was listed. The ingredients are the same in a Brown Derby, but bourbon is used.

We love this bourbon recipe that incorporates a rosemary sprig with bourbon and grapefruit juice.

Instead of simple syrup or sugar, this recipe works best when honey syrup is used to sweeten it.

Traditionally, a mojito is made with rum, fresh mint leaves, sugar, and fresh limes and lime juice. We love this grapefruit take on the classic Cuban cocktail.

To make the grapefruit basil mojito, you need fresh basil leaves instead of fresh mint leaves. Also, for a sweetener, use agave syrup instead of sugar.

Light rum provides the boozy kick, and fresh pink grapefruit juice brings the flavor. You still need club soda (or grapefruit soda) to give this mojito its signature fizz.

The Siesta cocktail is a fairly new mixed drink. This fruity cocktail was invented by a bartender named Katei Stipe in New York in 2006.

There’s something wonderful about the unique mixture of Italian and Mexican liqueurs (tequila and Campari), and the flavors mix perfectly to create a sweet and fruity drink that will satisfy even the most discerning tastes.

Put all of the ingredients into a cocktail shaker and shake them up nicely until they’re super cold. Then strain into a champagne glass or other cocktail glass.

Traditionally, a classic Greyhound cocktail is made with gin. However, you can also make this delicious grapefruit juice drink with vodka.

The Greyhound was created sometime during the early part of the 1900s, and it’s called the Greyhound after the famous bus line of the same name.

To make a Greyhound, you need simple syrup. You can make your own simple syrup easily from scratch, but you can also buy some already made at liquor stores and in the mixers section of any supermarket.

Pour all of the listed ingredients into a cocktail shaker with ice cubes and shake until the good stuff inside is very cold. Then, strain your Greyhound into a martini glass or another cocktail glass.

You can also serve a Greyhound on the rocks with ice cubes or crushed ice.

If you love beer and beer cocktail recipes, you’re going to go gaga over the Grapefruit Shandy.

What is a shandy? A shandy is a beer cocktail that was created in the middle of the 1800s in Great Britain. The word “shandy” comes from “shandygaff,” which is apparently what folks back then called a beer that’s mixed with ginger ale or ginger beer.

In French, a shandy is sometimes called the Panache.

For a Grapefruit Shandy, you need a good Mexican beer such as Modelo Especial. You also need tequila and grapefruit juice.

We love a good margarita and southern living, but what happens when you balance out the fresh lime juice with some fresh grapefruit juice? A grapefruit margarita!

A grapefruit margarita has an incredible citrus flavor and a bit more sweetness than a traditional margarita.

While the margarita was invented in the 1930s in Mexico, the grapefruit margarita is a newer creation.

How do you make a grapefruit margarita? Just add grapefruit to your traditional margarita ingredients.

You can use Rose’s Lime Juice instead of agave nectar if you prefer that. 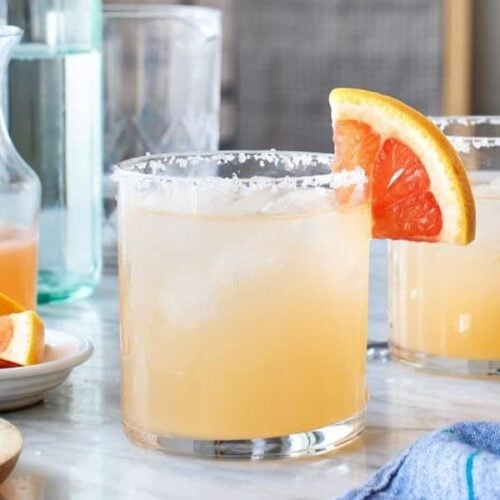 These recipes are sure to please. So, gather your family and friends and enjoy. Let us know your thoughts!
5 from 7 votes
Print Recipe Pin Recipe
Total Time 9 mins
Course Drinks
Cuisine American
Servings 2
Calories 275 kcal

Calories: 275kcal
Keyword grapefruit cocktails, salty dog
Tried this recipe?Let us know how it was!