The popularity level of Sriracha has risen steadily over the years to the point that it is almost ubiquitous in the grocery store sauce aisle.

Contents show
1 What is Sriracha?
2 What is a good substitute for Sriracha?
3 How do you use sriracha?
4 The Top 5 Substitutes for Sriracha
4.1 Sambal Oelek
4.2 Tabasco or Other Hot Sauces
4.3 Peri-Peri or Other Cooking Sauces
4.4 Gochujang or Other Cooking Pastes
4.5 Dried Cayenne Pepper
4.6 Wildcard: Ketchup
5 Does sriracha need to be refrigerated?
6 Can I make my own Sriracha?
7 Related Posts:

If you haven’t come across it before stumbling upon a recipe, then Sriracha might seem confusingly specialized.

A chili sauce with a hard to pronounce name and a rooster on the bottle might not be an obvious shopping choice.

Be prepared to start seeing that more often, as Sriracha’s popularity only grows. As it becomes more common, expect to find it sneakily popping up in ingredients lists.

If you know all about Sriracha then you might find the addictive sauce is gone before you’ve realized. Such a large bottle disappears quickly when you can add it to almost anything.

Either way, whether you're a long term fan or a first time user, it’s worth knowing what you can use when Sriracha is not available.

Whether you can’t find it in the shop, your bottle is running or dry, or you just didn’t know where to start looking.

A traditional Southeast Asian sauce, Sriracha has exploded in global popularity over recent years. The iconic red rooster of Huy Fong’s classic Sriracha can now be seen on the shelves of major supermarkets and smaller delis up and down the country.

Sriracha is said to have originated in Thailand, although there’s some debate as to its exact place of origin. One common theory is that it was first produced by a woman named Thanom Chakkapak in the Thai town of Si Racha - hence the name.

Having spread across much of Southeast Asia, Sriracha was first introduced to America in the 1980s by Huy Fong Foods. For many, the red rooster of Huy Fong has become synonymous with Sriracha.

Sriracha is made of a mixture of chili peppers, garlic, sugar, salt, and vinegar. This gives it a unique flavor profile, mixing up heat with tang, and a slight sweetness. While hot, Sriracha is only a 1,000 - 2,500 on the Scoville Heat Scale.

For reference, Tabasco is around 2,500 or higher. It still packs a punch though, thanks to the limited ingredients list. Thicker than many cooking sauces, it can be adapted as a condiment.

Although at one time you may have struggled to find Sriracha for sale, the variety of brands on the market has diversified recently. From high-end artisanal makes, to budget bottles.

Each Sriracha carries its own unique version, although the quality does vary. If you’re trying it for the first time, the best known Huy Fong comes hugely recommended.

What is a good substitute for Sriracha?

The best substitute for Sriracha is Sambal Oelek, an Indonesian hot sauce. Any good hot sauce can be substituted if you want to match the heat levels.

Tabasco is common, but try Tapatio, el Yucateco, Louisiana hot sauce, peri-peri sauce, Jamaican jerk sauce, gochujang, or harissa. Anything that might be hanging around your cupboards and gives a good kick.

How do you use sriracha?

However you want, Sriracha is highly adaptable. It’s most commonly found across Southeast Asian cooking. Sriracha is delicious added to phở, stir-fry, curry, soups, and stews. It also works well in marinades.

In Thailand. Sriracha is used as a dipping sauce. Try it on top of fish cakes or with spring rolls, or as a side to dumplings.

If you like the flavor, you’ll probably want to try it on everything from sushi to pizza. Sriracha can be give a fantastic boost to plainer dishes such as omelets and scrambled eggs.

The Top 5 Substitutes for Sriracha 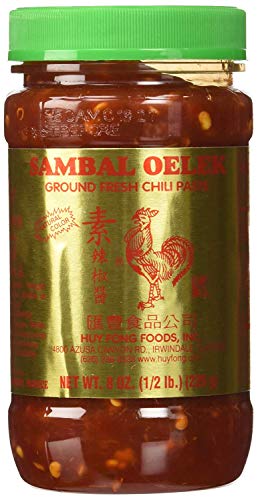 Sambal Oelek is the closest direct substitute for Sriracha. An Indonesian chili sauce, it’s fast growing in popularity and can be found in most supermarkets.

Although not quite as popular as Sriracha just yet, it’s still a relatively easy ingredient to source.

The thick consistency is what makes Sambal Oelek the closest match, but in terms of flavor profile it’s pretty spot on as well. If you’re feeling particular, Sambal Oelek lacks the garlic tones of Sriracha.

Adding a fresh chopped clove or a pinch of garlic powder can counteract that. But in most recipes, Sambal oelek will act fine as a direct substitute.

Huy Fong, the brand most closely associated with Sriracha, also make a Sambal Oelek, so look out for that one on the shelves.

You can make your own as well, and it doesn’t require the fermentation process that’s a necessity of making Sriracha.

(It’s worth knowing this goes both ways. If you’re after Sambal Oelek and can’t find any, Sriracha is a great substitute.)

Tabasco or Other Hot Sauces

Tabasco is a simple substitute for Sriracha, but any hot sauce you might have lying around works. Tabasco lacks the consistency, but isn’t far off in the spice level.

While may dishes call for Sriracha due to its unique taste, the primary feature is the heat. Whatever your hot sauce of choice is can make a low fuss substitute. Tabasco is common as it’s so adaptable, but anything in your cupboard can do.

To make the closest match first consider the flavor of Sriracha and what’s missing from other hot sauces. While Sriracha has the heat, the tastes of vinegar, garlic, and sugar also come through.

In many cases if your dish feels like it’s lacking in something it will be one of those three ingredients. Play around with quantities to see what works for you.

Sriracha is spicy, but there’s a lot out there that’s spicier. When a recipe calls for a tablespoon of Sriracha, a few drops of Tabasco is probably all you need.

Peri-Peri or Other Cooking Sauces 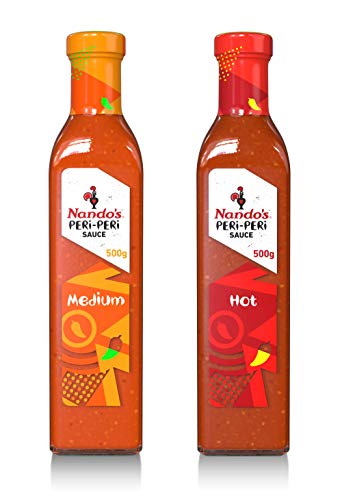 Peri-peri sauce is a tangy Portuguese sauce that’s common is even smaller supermarkets. Slightly thicker than other hot sauces, the consistency will be similar to Sriracha, although the spice levels are variable.

If you’re making a recipe that calls for Sriracha as part of a marinade or a rub for meat, then a spicy cooking sauce is a good alternative.

Something like Jamaican jerk sauce won’t have the same flavor, but it will have a close consistency.

As with the hot sauces, play around with garlic, sugar, and vinegar if you want to get a better match.

Gochujang or Other Cooking Pastes 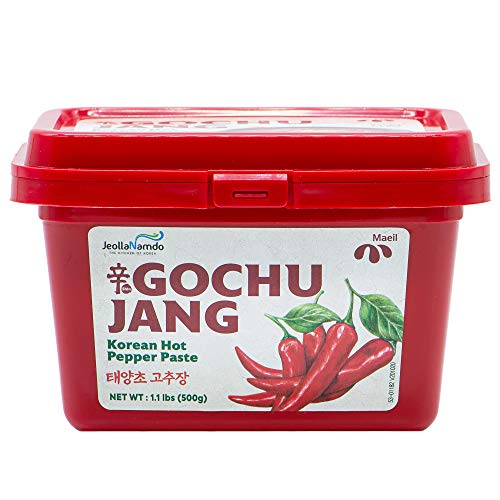 Gochujang is a Korean cooking paste, commonly used in bibimbap. Of the cooking pastes, Gochujang is the closest in flavor to the fermentation of Sriracha, although it lacks Sriracha’s vinegar tang.

It also has a much thicker consistency, so if you are making the switch then slowly add water to your Gochujang to thin.

Other cooking pastes, such as harissa and chipotle, also work if it’s the heat you’re after. If using chipotle, play around with adding vinegar and sugar.

And keep an eye on the spice levels, as many cooking pastes have a more concentrated chili flavor.

If you’re in a pinch, cayenne pepper will work for a dish that calls for Sriracha. Commonly considered a ‘neutral spice’, cayenne pepper adds heat without changing the flavor of the dish.

Obviously neither of these work as a sauce substitute, but sprinkled on top of a dish they’ll give you the same kick as Sriracha.

This solution is for when you’re halfway through a recipe and discover the only thing coming out of your Sriracha bottle is air. In most cases, try and use a sauce or paste as replacement.

Most of the time ketchup won’t have what you’re looking for in a Sriracha substitute. Ketchup lacks heat entirely, so if you’re after a little spice in your dinner it’s best to try elsewhere.

But sometimes we have no choice, and if you’re really running out of options, ketchup has the sweetness of Sriracha.

If you’re looking for a substitute for someone who doesn’t like heat, ketchup makes a semi-decent replacement for Sriracha in stir-fries and curries.

Avoid using tomato paste. They may seem to be a similar consistency, but the flavor profile doesn’t match up at all.

Does sriracha need to be refrigerated?

No, once opened sriracha is good on the shelf for around about six months. If you think you’re Sriracha is going off you can generally tell from a change in color.

The bright red color of Sriracha dulls and darkens over time. Aside from potentially making you ill, old Sriracha just doesn’t taste as nice.

If kept in the fridge, Sriracha’s shelf life does extend dramatically, and it can last for up to two years. For most die hard fans, the idea of keeping Sriracha around for two years is shocking.

But if you do enjoy it only on occasion, it’s best to pop the bottle in the refrigerator, so you know it’s good the next time a recipe calls for a spoonful.

Can I make my own Sriracha?

Yes. The ingredients list for Sriracha is small, so it isn’t hard to make your own. However, it does need to ferment.

If you’re looking to make your own as a quick substitute then it’s better to try one of the ideas mentioned above, or you will be waiting at least 3 to 5 days to eat.

To make your own Sriracha you’ll need red jalapeño chilies, garlic, sugar, salt, and white vinegar. Jalapeño is traditional, but not mandatory, and you can use whatever chilies are available.

Blend all the ingredients except the vinegar, then add to a sterilized jar and leave for at least three day, stirring occasionally. This is for the fermentation that really makes the flavor.

At the end of the fermentation process heat your mixture with the vinegar and bring to a boil then simmer for roughly ten minutes. Finally, cool the mixture before blending and straining.

The benefits of homemade Sriracha is that you can adjust the ingredients levels to work for you, as well as the consistency. The downside is it takes longer, and requires at least a pound of red peppers to make it worth doing.