There’s no question about it: Jamaican cuisine is responsible for some of the most intensely flavorful, hearty dishes in the world.

The foundation of Jamaican cuisine comes from a variety of cultural influences, including Indian, French, African, Chinese, Spanish, and English cooking styles, to name just a few. 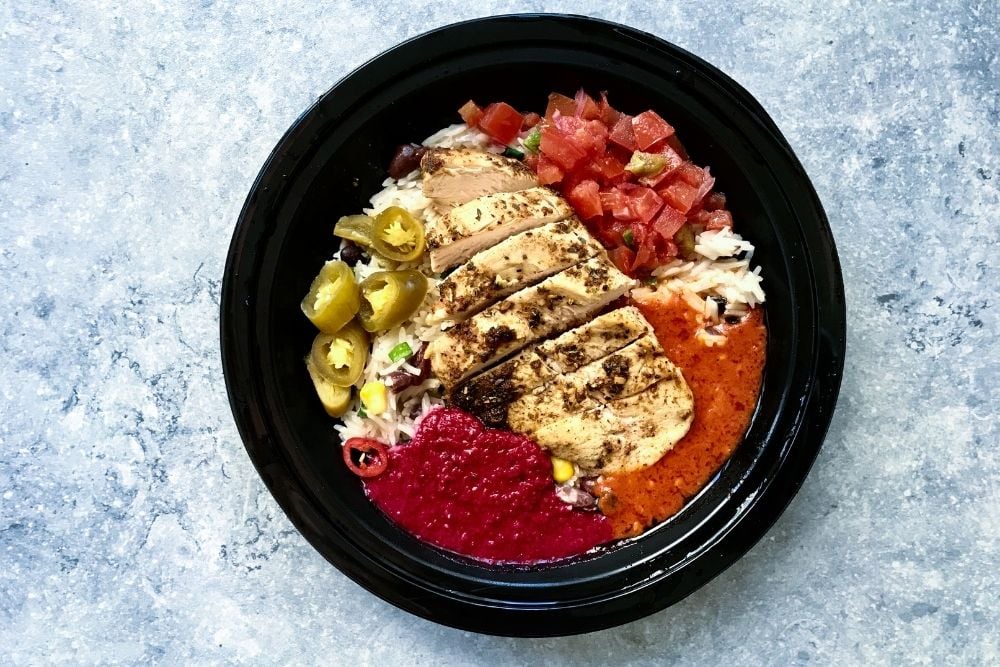 For anyone who doesn’t know, Jamaica is a Caribbean island. From a culinary perspective, the island is primarily known for its spicy, marinated dishes, although it’s also famous for being home to some of the most wonderful people and the most vibrant culture.

In today’s article, we’ll be introducing you to the top 25 Jamaican dishes of all kinds, from sumptuous soups and marvelous meat dishes to delicious drinks and desserts!

Whether you’re looking for something sweet or savory, light or filling, or anything in between, there’s something for you on our list. 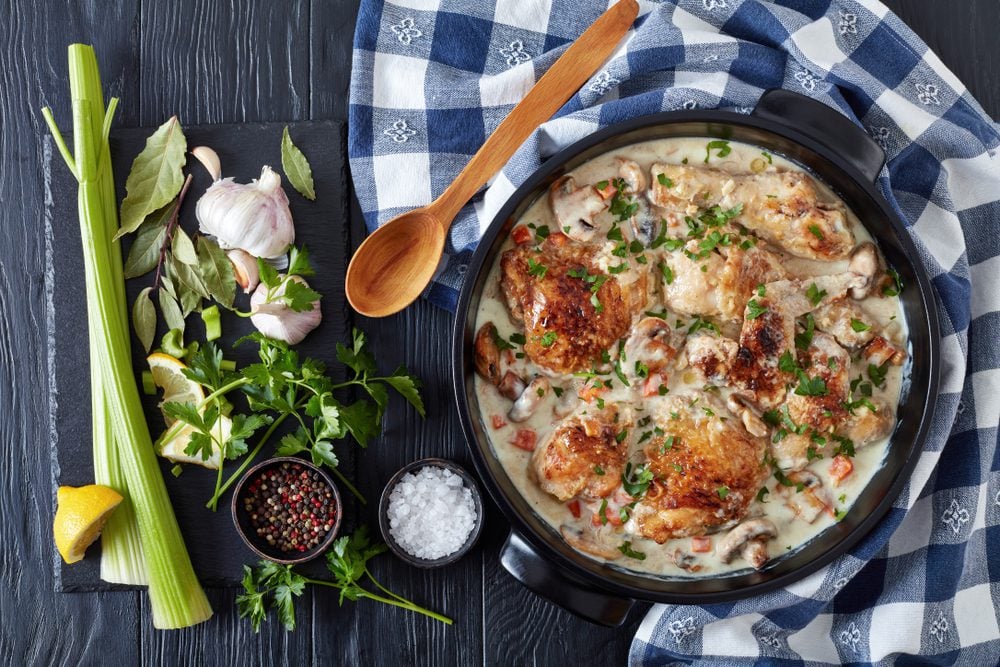 Chicken Fricassee, as you may have guessed by the sound of the name, is a dish with French origins, but it’s a firm favorite in Jamaica.

The dish is made by first cutting the chicken into serving-sized portions and seasoning them well with pepper and salt. Then, the chicken is placed into hot fat and fried. To finish the cooking process, the meat is left to simmer in water with soya sauce and tomato ketchup.

Typically, the chicken is served alongside vegetables such as onions, potatoes, and carrots. 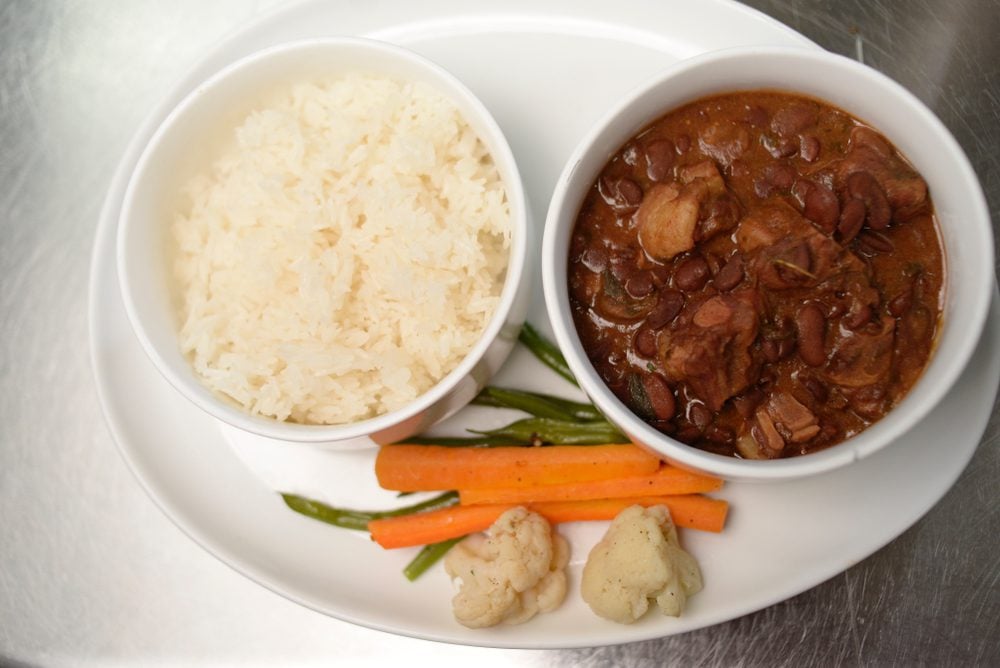 Stewed Peas is the name of a dish that is actually made with kidney beans. The dish also traditionally contains meat, which can be either pork or beef. In some cases, pig’s tails are added.

This is a very filling and flavorful dish thanks to the fact that the meat is cooked in a seasoned coconut milk mixture. Spinners (Caribbean dumplings) are often added to the dish, along with white rice. 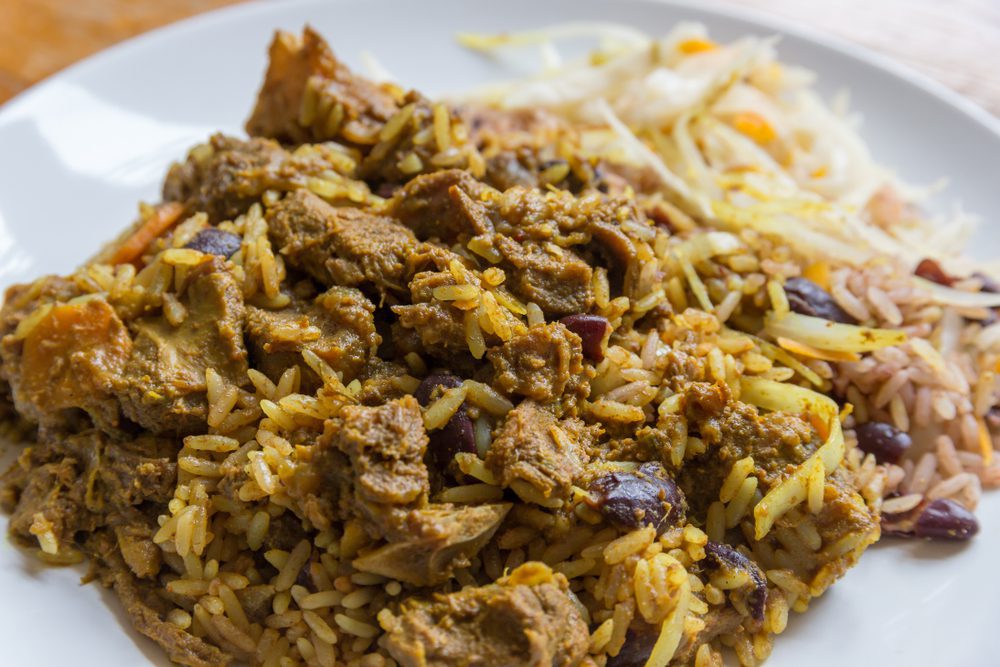 You might also hear the Jamaican Goat Curry referred to as Curried Goat. The dish is influenced by both Jamaican and Indian cuisine.

This is a stir-fried curry dish, made by dicing up goat meat and covering the pieces in curry powder in addition to other spices and herbs. The ingredients are then fried in oil and, finally, stewed in hot water to make the meat really tender. Usually, white rice is served on the side. 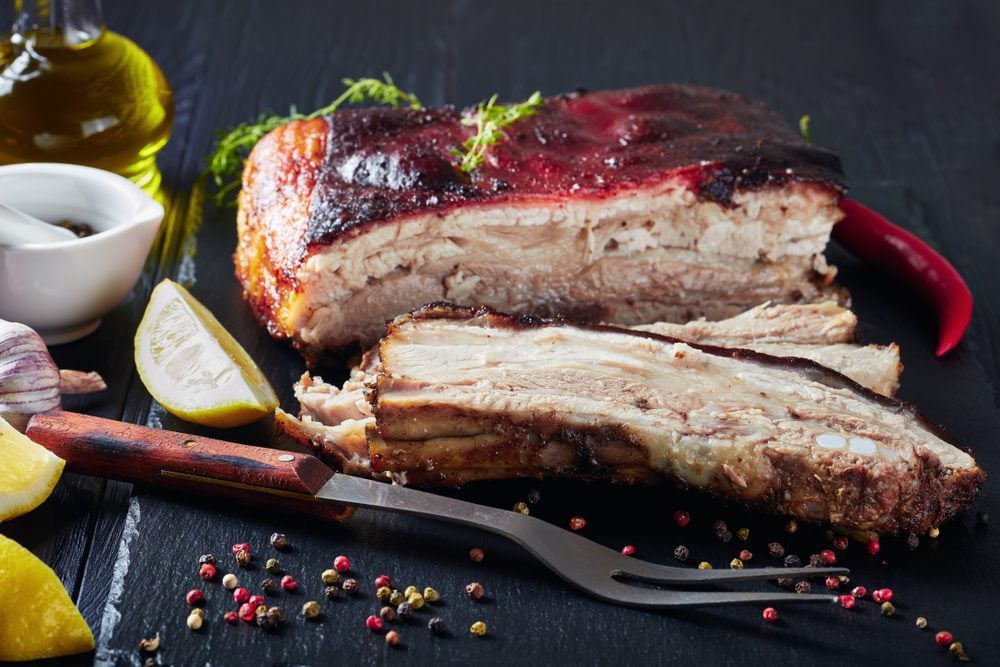 Jerk Pork is one of the most popular meat-based dishes in Jamaica. ‘Jerk’ refers to a type of cuisine from African and Taino origins, and it involves marinating meat in a specific blend of herbs and spices.

To make Jerk Pork, strips of pork are marinated in scallion, thyme, and Jamaican pimento pepper.

Once the marinating process is complete, the pork is slowly grilled above a wood and coal fire. When the meat is ready, it is traditionally served with dumplings or bread. 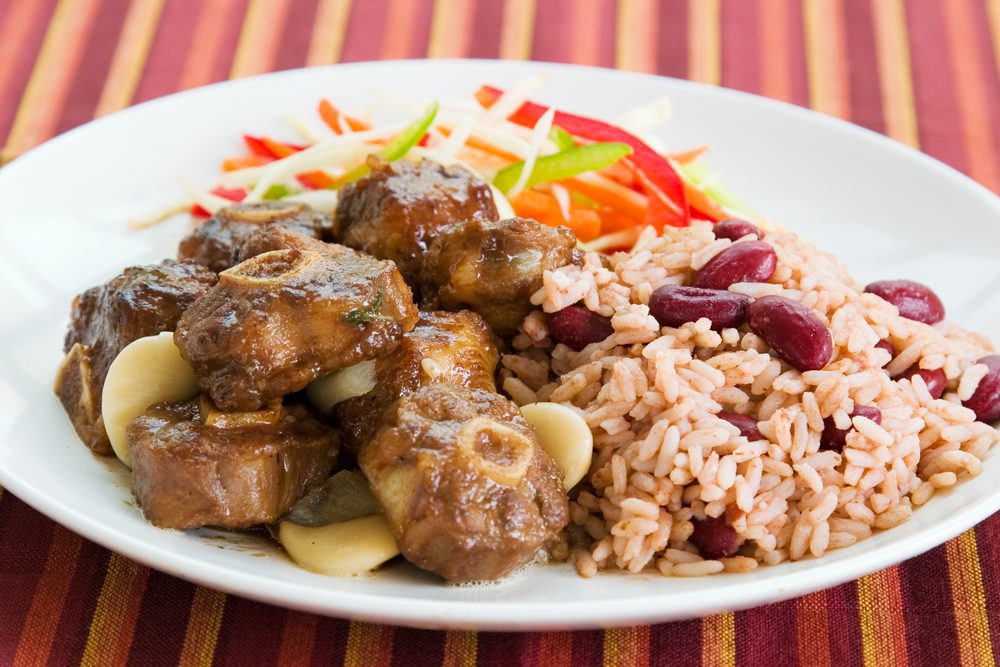 Oxtail and beans is another warm, hearty, and comforting dish that you’ll find served throughout Jamaica.

Pieces of oxtail are fried quite heavily until they turn brown before draining the oil and adding beans and water. The contents of the pan are then stewed for a long time (or for a shorter time if you’re using a pressure cooker).

There are many potential serving suggestions for oxtail and beans, but some of the most popular are boiled sweet potatoes and rice. 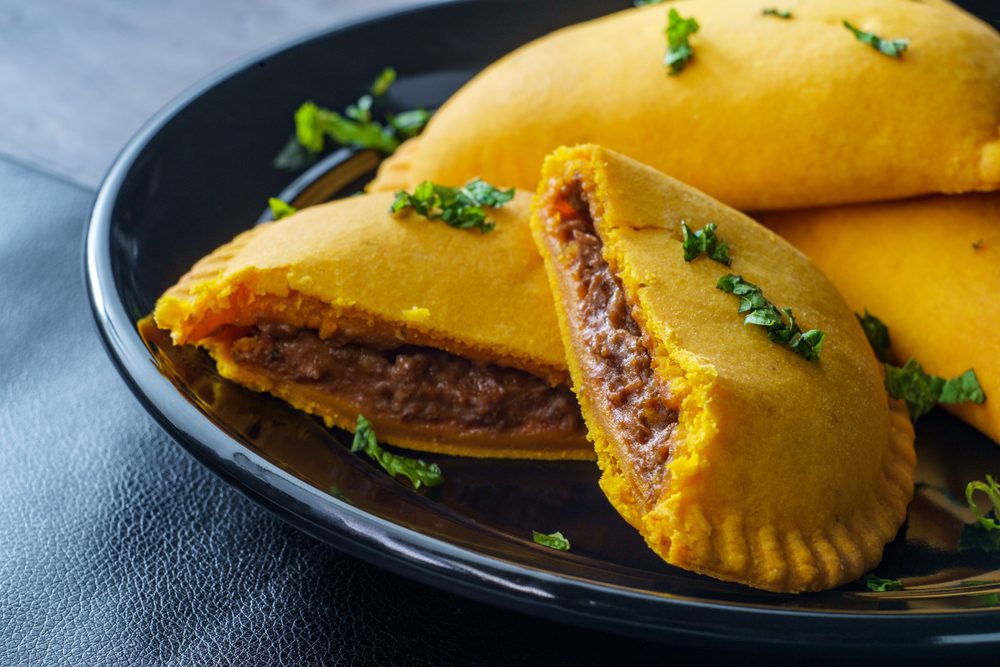 Patties are a nationwide favorite meal in Jamaica, and part of the reason why is that they are so convenient and comforting to eat as well as very versatile.

The traditional Jamaican patty consists of a pastry shell, stuffed with a blend of ground beef and spices.

However, these patties come with a wide variety of fillings, including chicken, seafood, and vegetables. 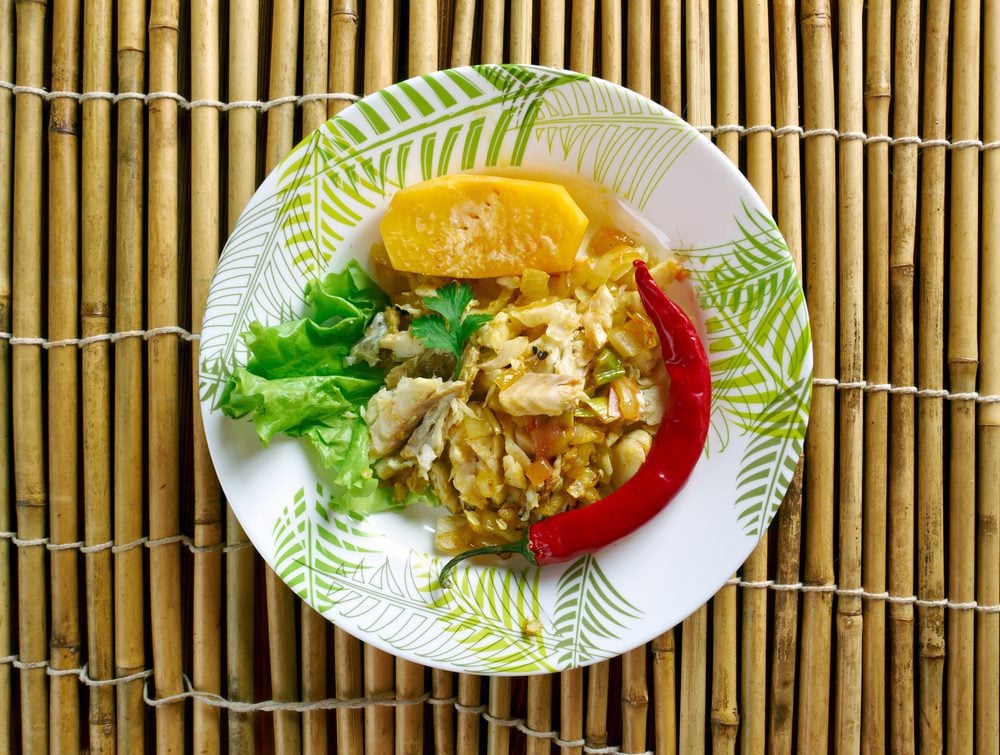 Fish dishes are just as popular as meat dishes in Jamaica, and what better dish to start this category with but one that incorporates Jamaica’s national fruit!

Ackee is a type of soapberry that was originally imported from West Africa.

Often served at breakfast, Saltfish and Ackee is a popular combination. The seeds are removed from the Ackee and then the fruit is boiled and fried before being served with boiled saltfish.

Sides for this dish include plantain, sweet potatoes, and dumplings. 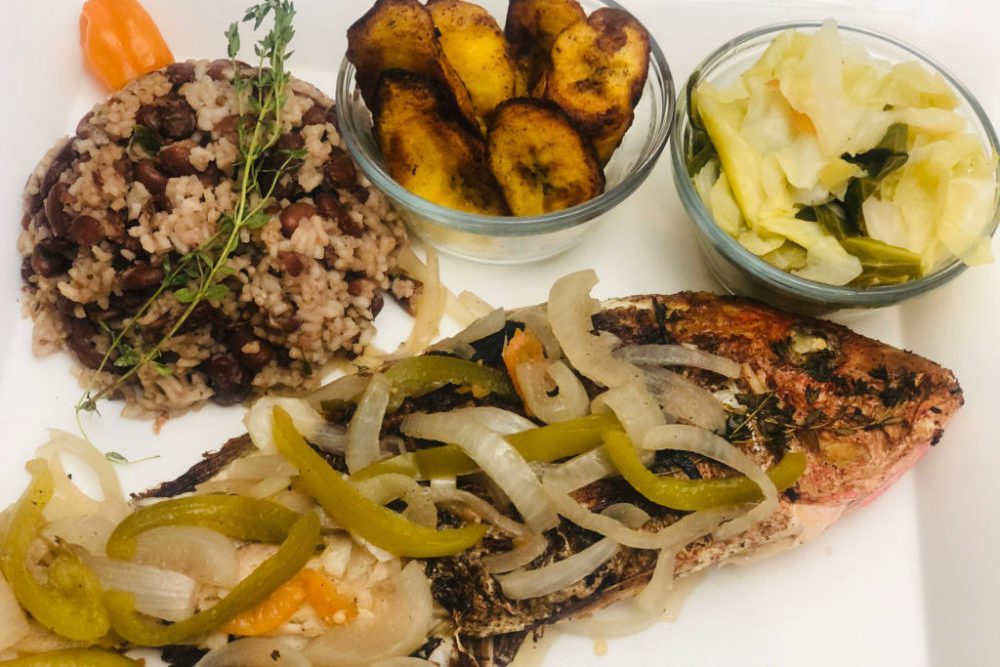 Many types of fish can be escoveitched to produce this beloved Jamaican dish. This process involves rubbing pepper and salt into the fish before frying it to a crispy texture.

Before serving, the fish is topped with vegetables (scotch bonnet peppers, pimento peppers, and onions) and a mixture of vinegar and pimento seeds.

Serve while hot with bammy (see below) or Caribbean dumplings (festivals).

9. Dip and Fall Back (Mackarel Rundown) 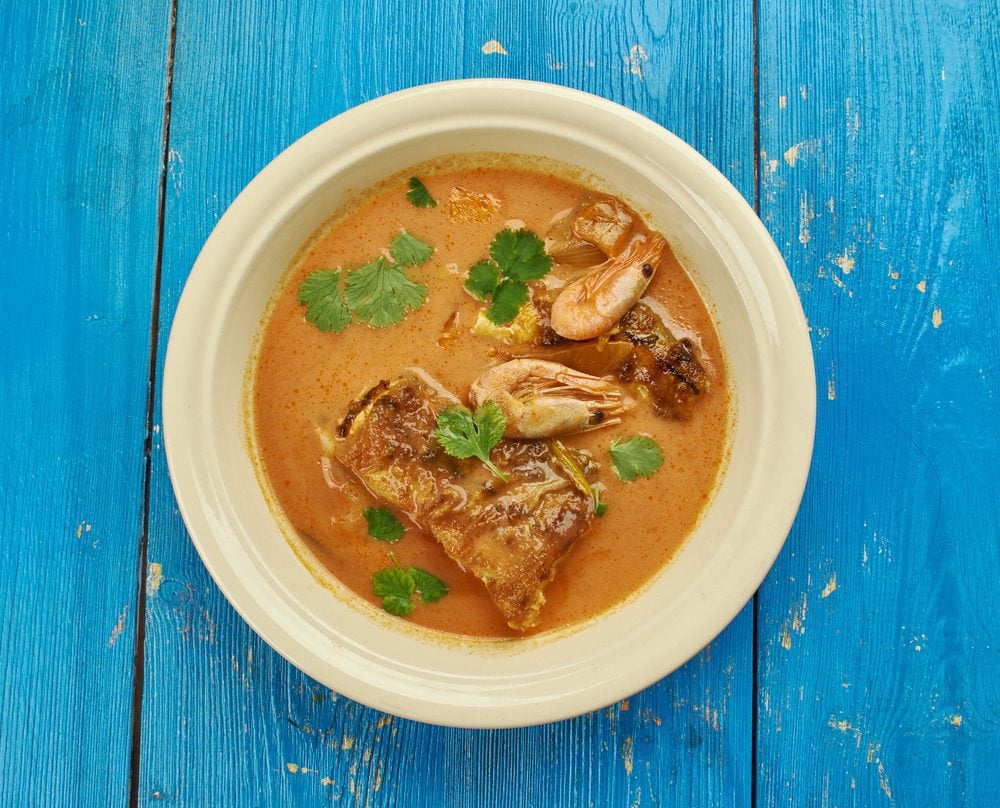 Dip and Fall Back is an alternative name for the Jamaican favorite, Mackerel Rundown.

Before cooking, the oily fish is first pickled in a blend of coconut milk, spices, and herbs. It’s typically served as a breakfast dish and can be accompanied by bananas, which are traditionally boiled while still green. It can also be presented with a side of roasted breadfruit. 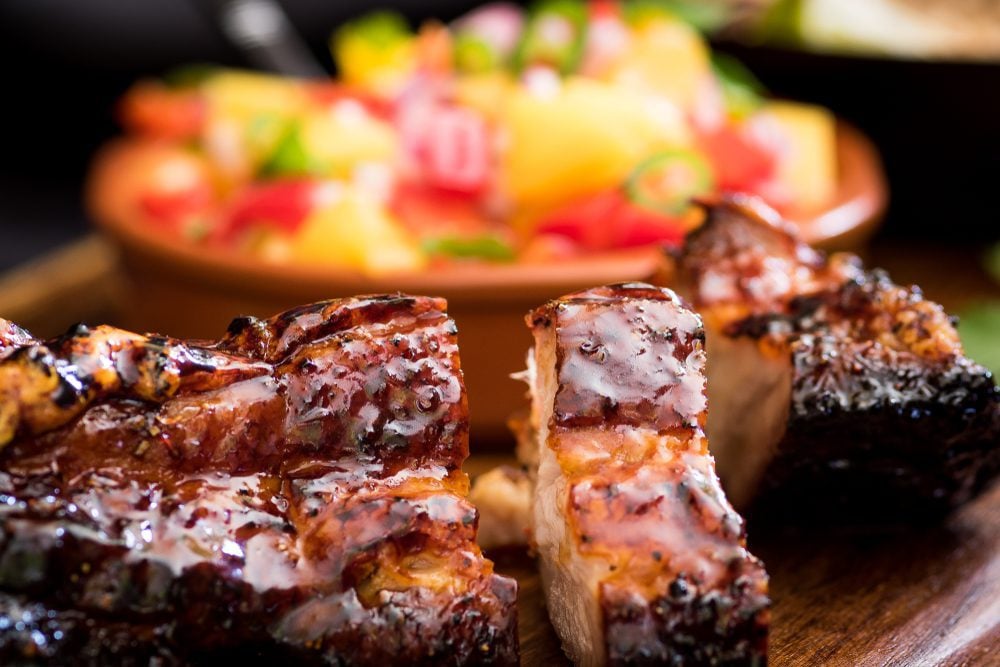 There’s actually no steaming involved in this recipe, but despite the potential confusion caused by the name, this is one of the top fish dishes in Jamaica.

It is made by cooking down carrots, pumpkin pieces, tomatoes, and okras (seasoned with herbs and spices, of course) into a sauce. Then, the fish is added and cooked directly in the sauce for maximum flavor infusion.

Festival dumplings, bammy, and water crackers are the preferred sides for this dish. 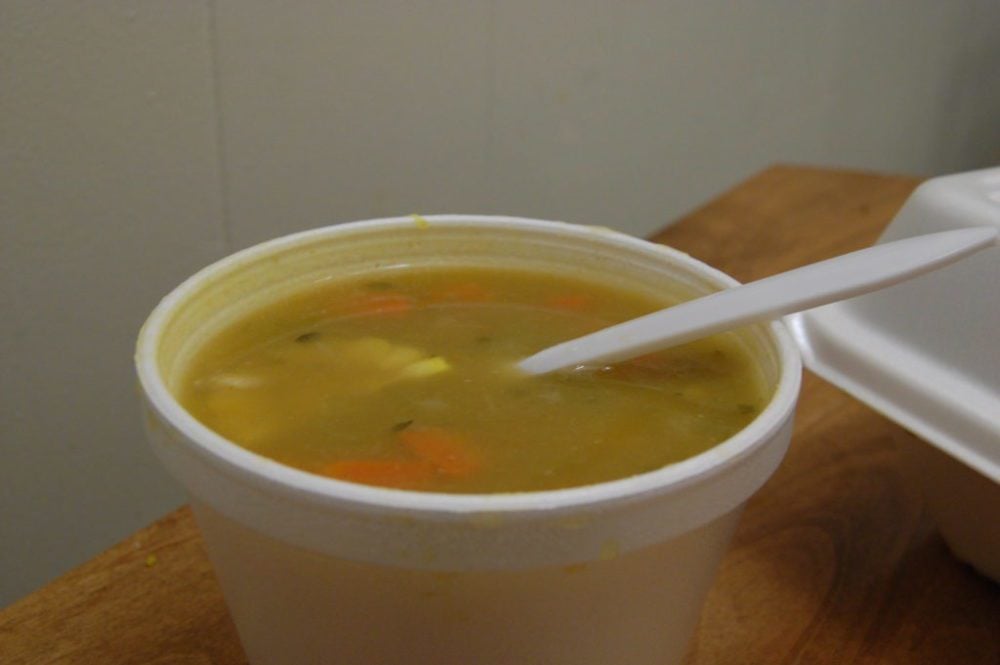 Often simply referred to as Fish Tea, this Jamaican broth is a type of thin soup made by boiling fish, okras, carrots, chochos, spices, and herbs together in water.

This infuses the water with a combination of delicious flavors while leaving you with some hearty chunks of fish and vegetables to enjoy. The dish strikes the best possible balance between a light and satisfying meal. 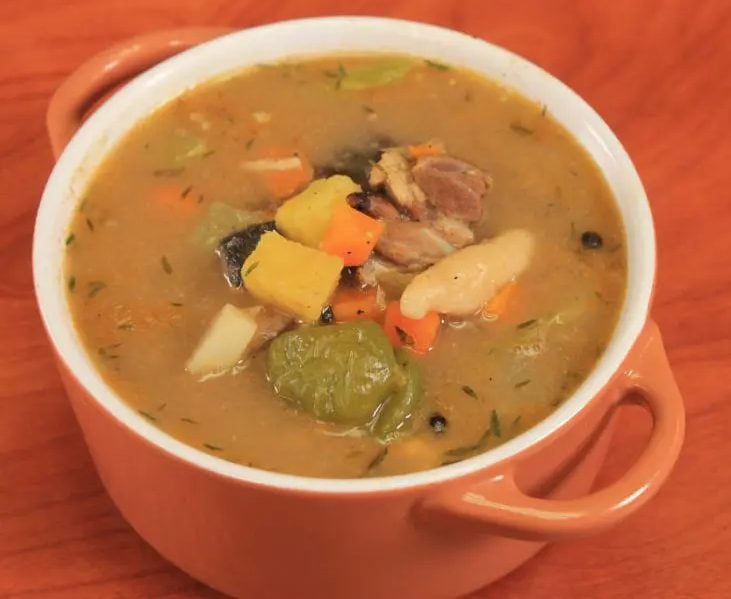 Mannish Water is another soup recipe, this time based around meat rather than fish.

The soup is made by roasting the head and feet of a goat before cutting them into more manageable chunks and boiling them in a pot along with the goat’s intestines and a combination of vegetables and fruit.

The fruit and vegetables involved usually include sweet potatoes, potatoes, and green bananas. 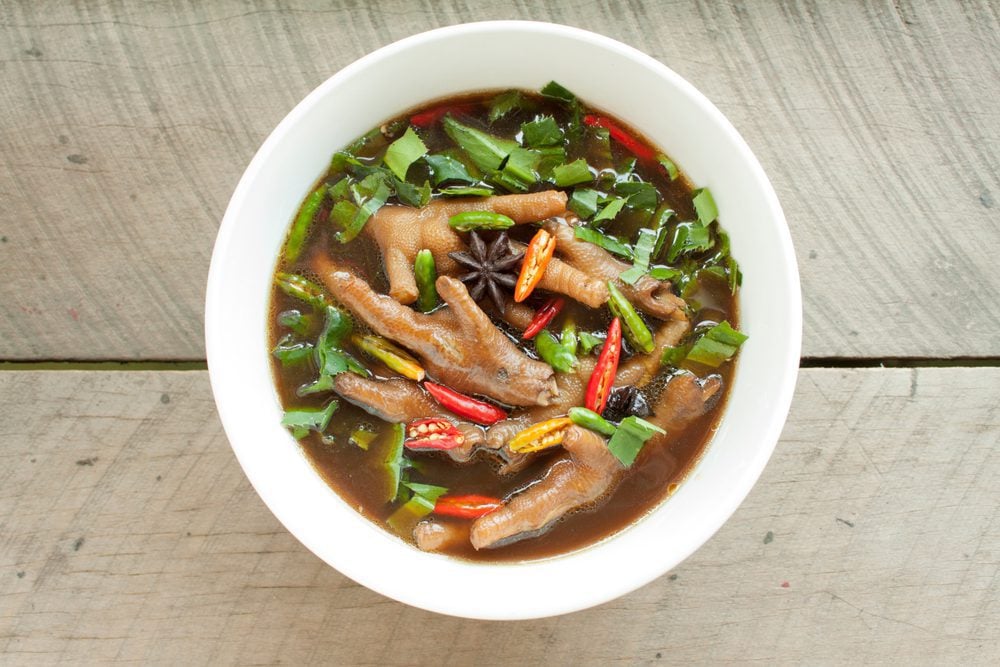 You might hear this soup referred to just as Chicken Foot Soup, but it is made with both chicken feet and vegetables.

This is a thicker, more filling soup, perfect for cold days. The chicken feet need to be boiled alongside the vegetables so that the flavors can come together while all the ingredients soften.

Yellow and orange vegetables are used to give this soup its warm, orange color. These usually include sweet carrots, sweet potatoes, pumpkins, turnips, and chochos. 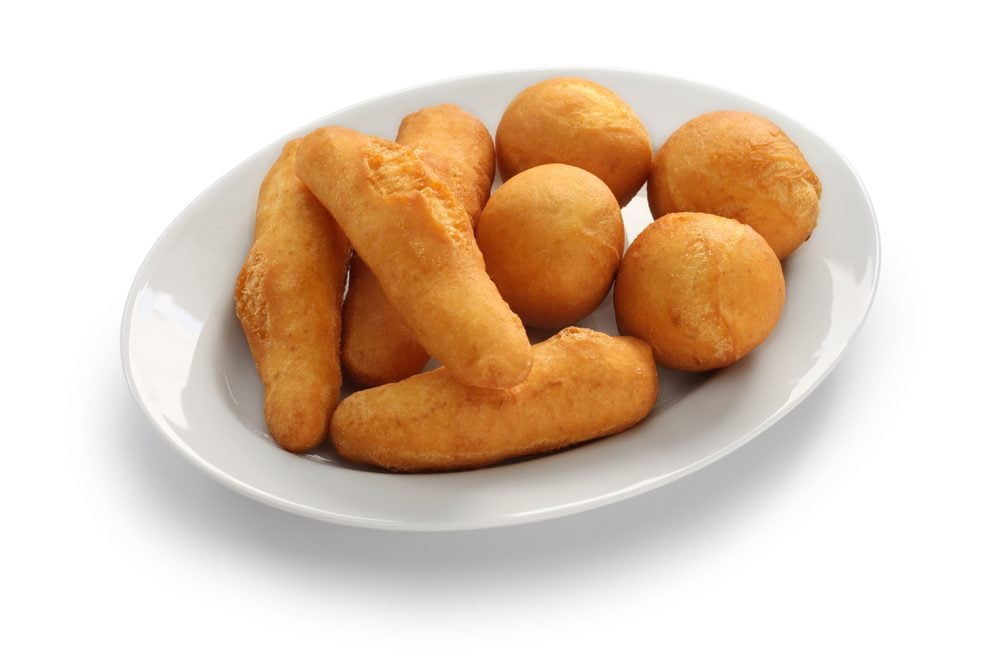 We’ve referred to festivals a couple of times throughout this article so far, and that’s because these dumplings are one of Jamaica’s most popular sides.

Festivals are made from a special type of dough, which is what makes them unique. The dough consists of cornmeal, flour, salt, sugar, and baking powder. Once rolled into the desired shape, the dough pieces are deep-fried. 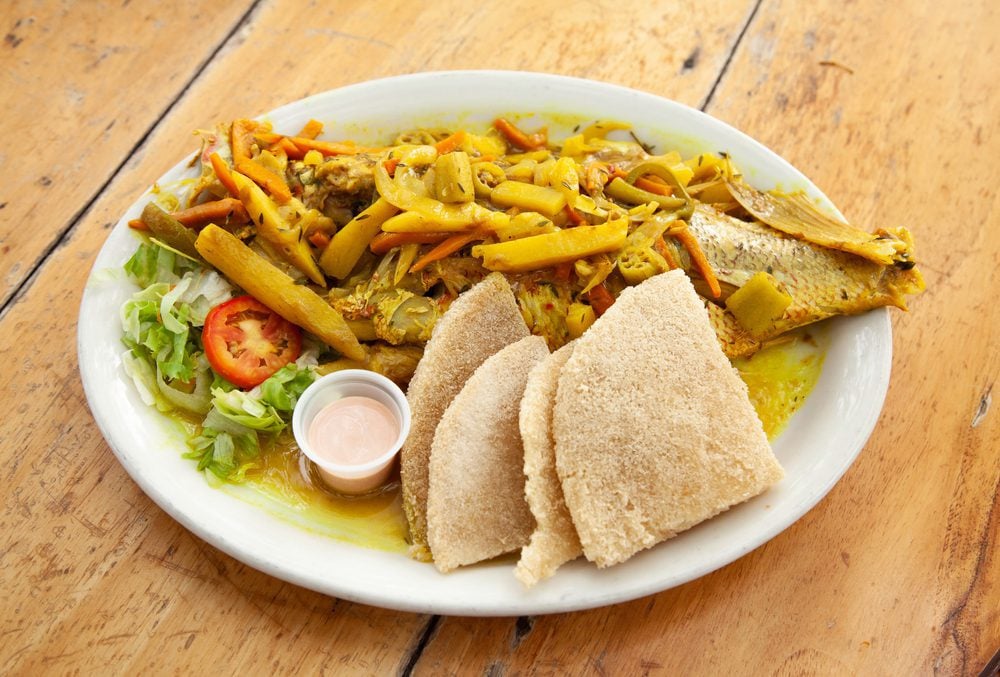 ‘Bammy’ refers to a type of Taino flatbread made out of cassava flour. Cassava flour is made from grated and dried cassava root, and it’s a fantastic gluten-free alternative to regular flour.

Even though Bammy is a type of flatbread, it doesn’t actually taste like bread at all. It also has a softer texture that’s almost gooey. 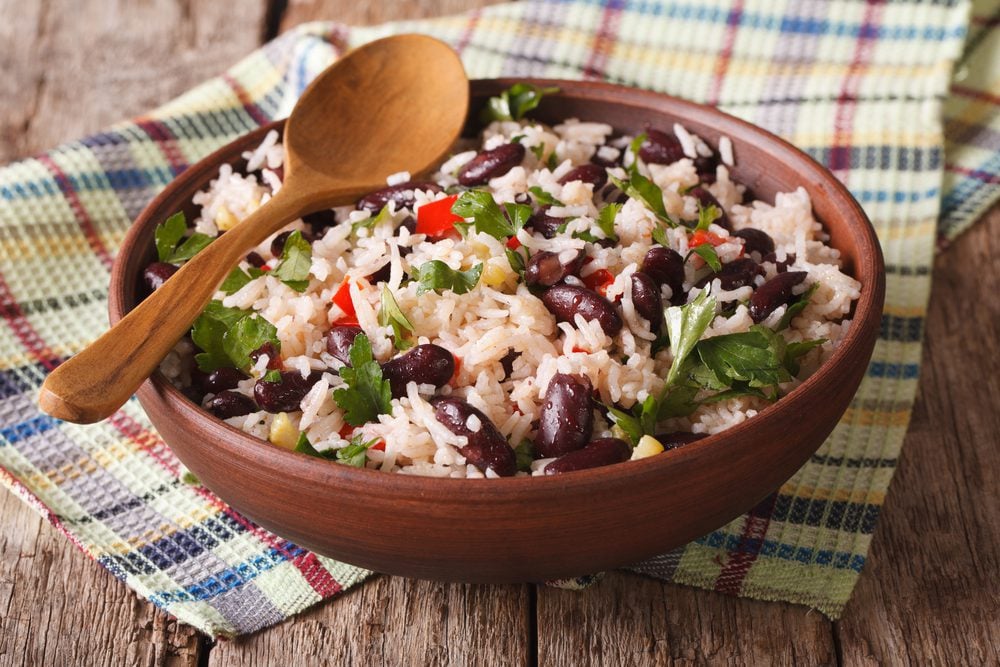 The name of this side speaks for itself, but never underestimate the power of rice and beans to bring a dish together!

In Jamaica, the combination of rice and beans is often served alongside main meals. Usually, red kidney beans (or peas) will be cooked until they soften before being simmered with coconut milk, rice, and a herb and spice blend. 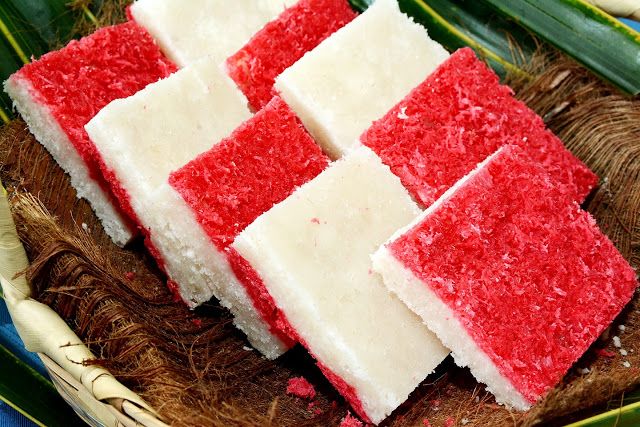 Grater cakes are a coconut-based dessert perfect for when you want something sweet and light to finish your meal.

Grated coconut is added to water along with granulated sugar and boiled until a thick consistency is achieved.

Red food coloring is added for aesthetic appeal before layering the mixture over a pre-prepared base of grated coconut in a baking pan. The contents of the pan are then cut into squares once everything has cooled. 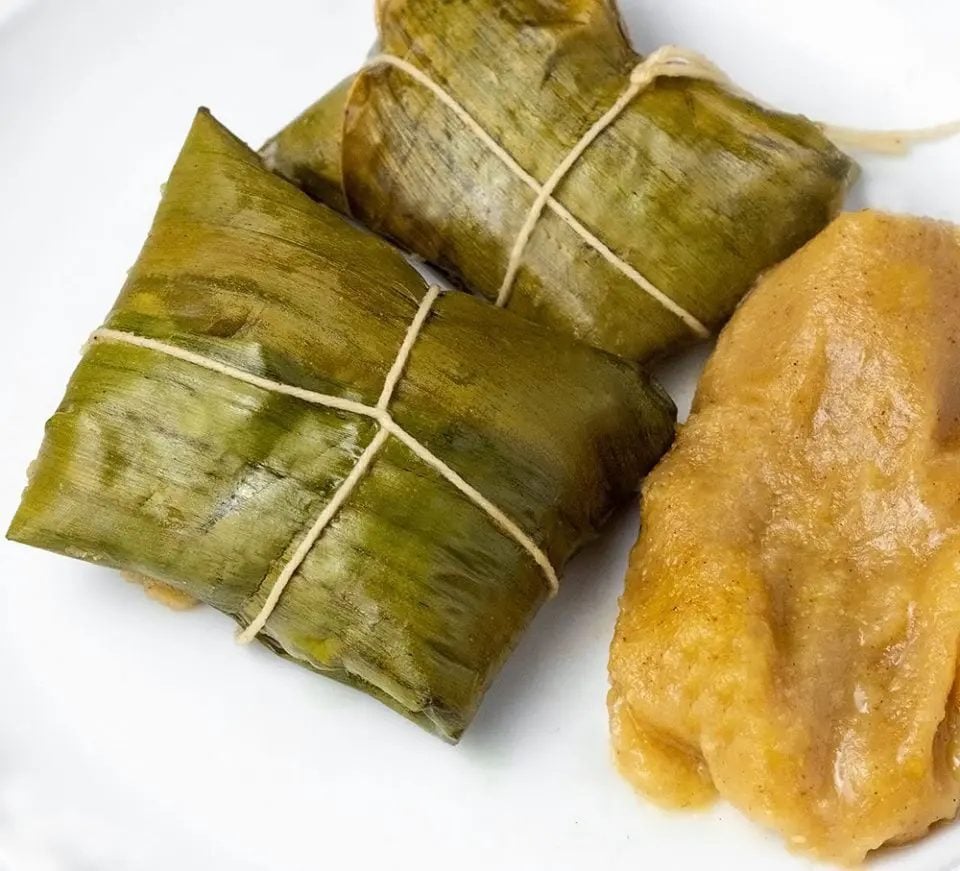 Duckunoo consists of a mixture of green bananas (grated), cornmeal, brown sugar, and coconut, wrapped in banana leaves and secured with string. The parcels are then boiled to complete the dish.

This dessert is also known as Blue Drawers and is African in origin. 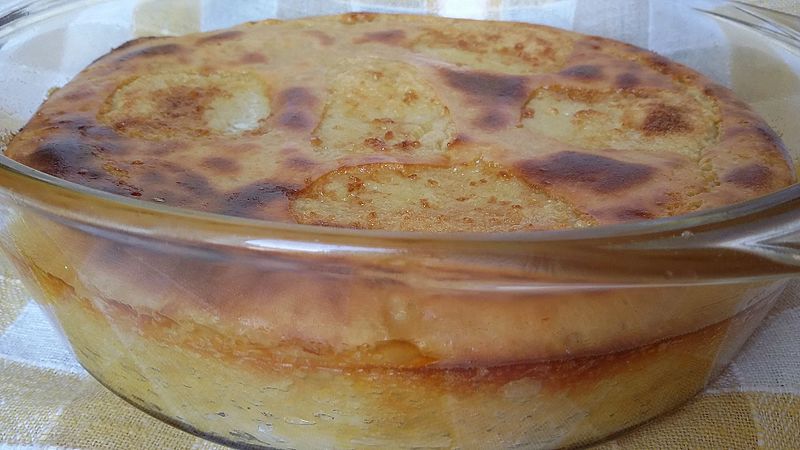 Sweet Potato Pudding is arguably the most well-loved Jamaican dessert. You’ll find it on menus in restaurants across the country.

The recipe involves combining sweet potato gratings with cane sugar, margarine, coconut milk, and a spice blend. The mixture is put into a cake pan and baked before serving with custard. The finished result tastes so sweet, you’d never guess that a vegetable was one of its primary ingredients!

Pudding is a highly popular dessert in Jamaica, often found in roadside food establishments and cafes. It is made with sweet potatoes that are grated and then mixed with coconut milk, brown cane sugar, margarine, and a selection of spices.

It is most commonly served with some custard on top. 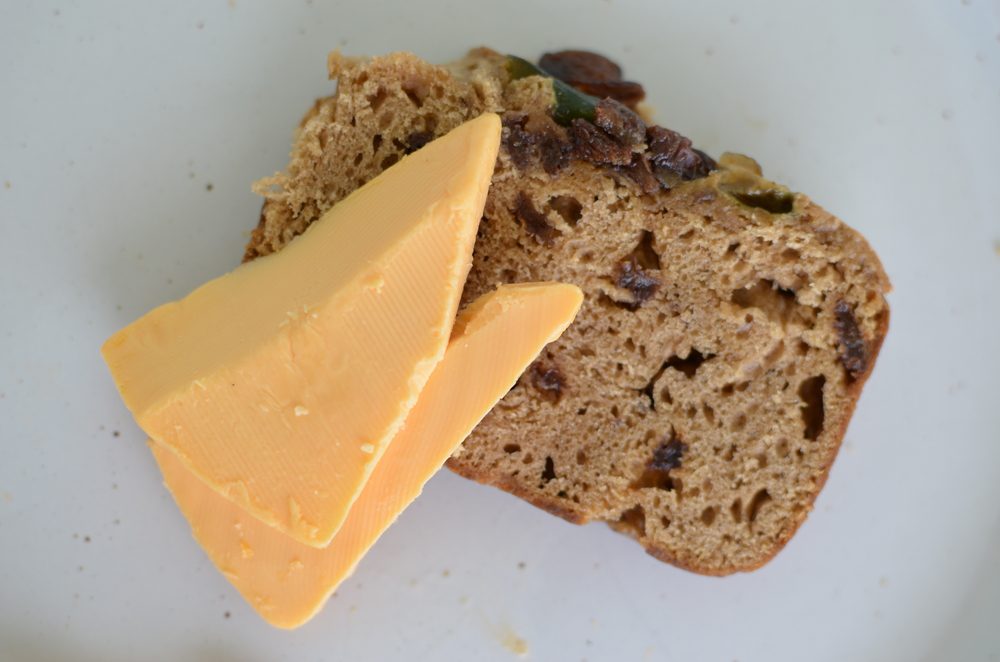 Despite its name, this cake is not just eaten at Easter. It’s enjoyed throughout the year, often with slices of cheese to balance out the sweetness and bring out the flavor of the wine. 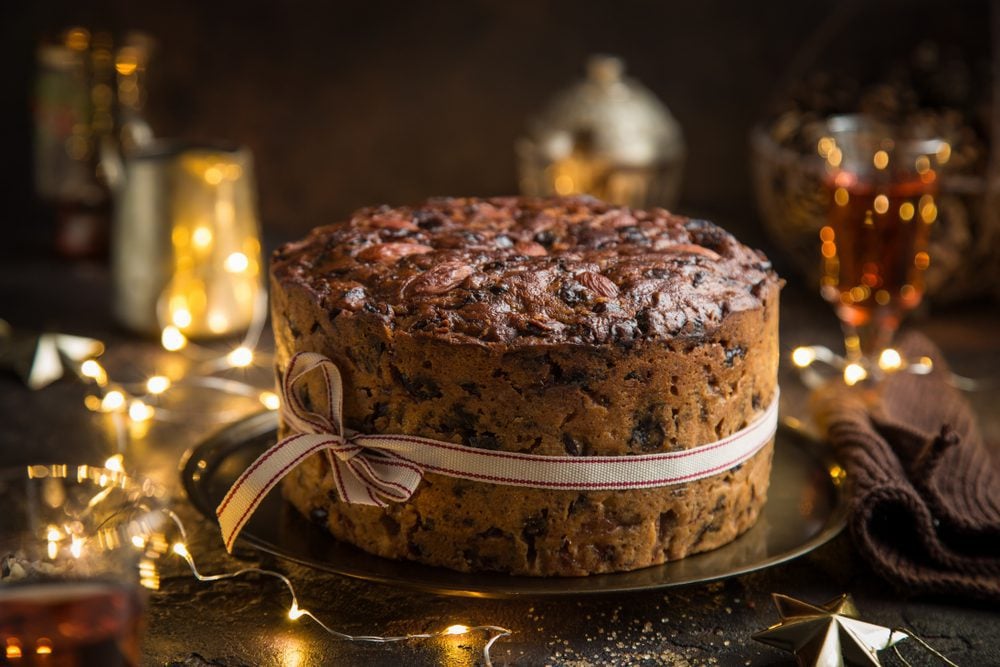 While we’re on the subject of fruit cake, another highly popular Jamaican dessert is Christmas Cake.

Similar to the traditional English Plum Pudding, this cake also contains dried fruit and alcohol. Red wine and rum are added to the mixture, soaking into the raisins, plums, and other dried fruit for an indulgent flavor experience. 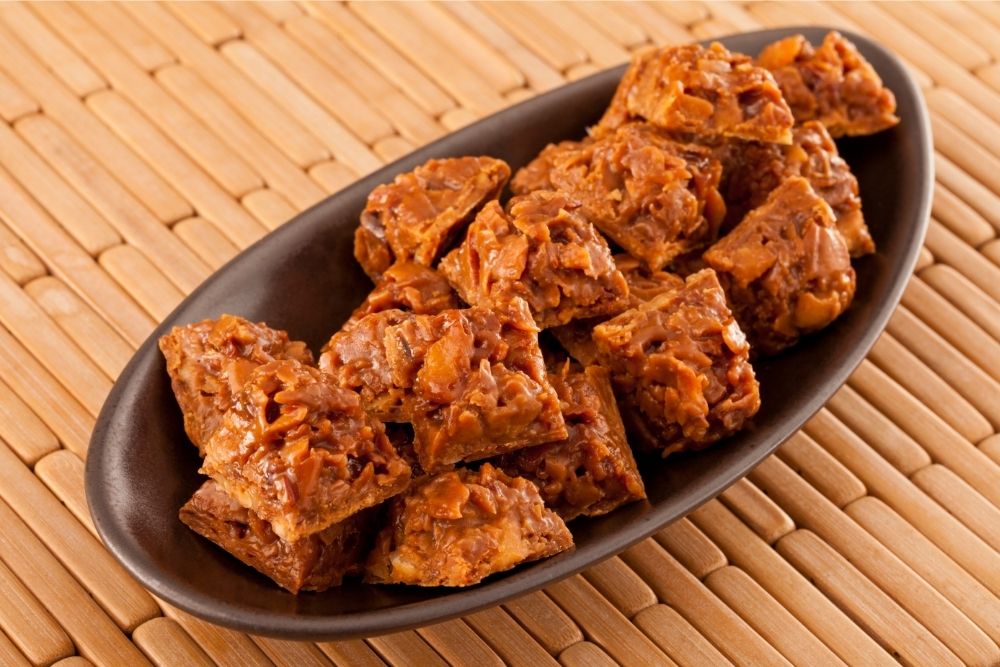 Coconut drops can be enjoyed either as a dessert or a sweet snack. They are made by dicing dried coconut and mixing the resulting cubes into a blend of water, ginger, and brown sugar.

The ingredients, once combined, are boiled to form a thicker, stickier consistency before being transferred onto non-stick parchment. Once they have cooled down and become hard, they are ready to serve. 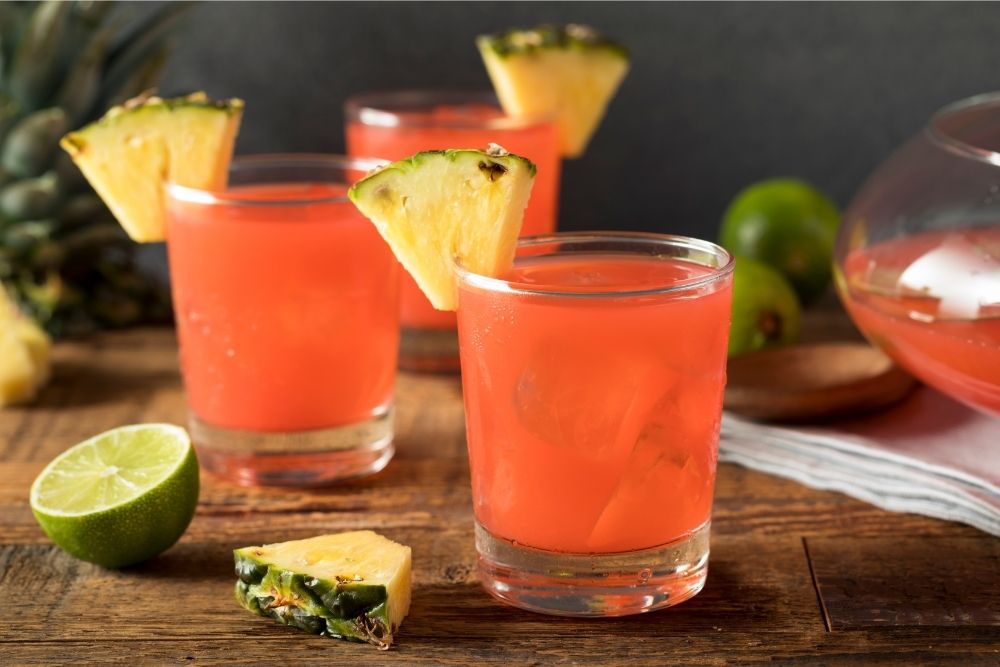 Rum Punch is an iconic Jamaican drink. It is made by combining both white and dark rum with grenadine syrup, orange juice, pineapple juice, lime juice, and potentially a coconut-flavored rum.

This is the perfect alcoholic drink for relaxing in the sun on a hot day. 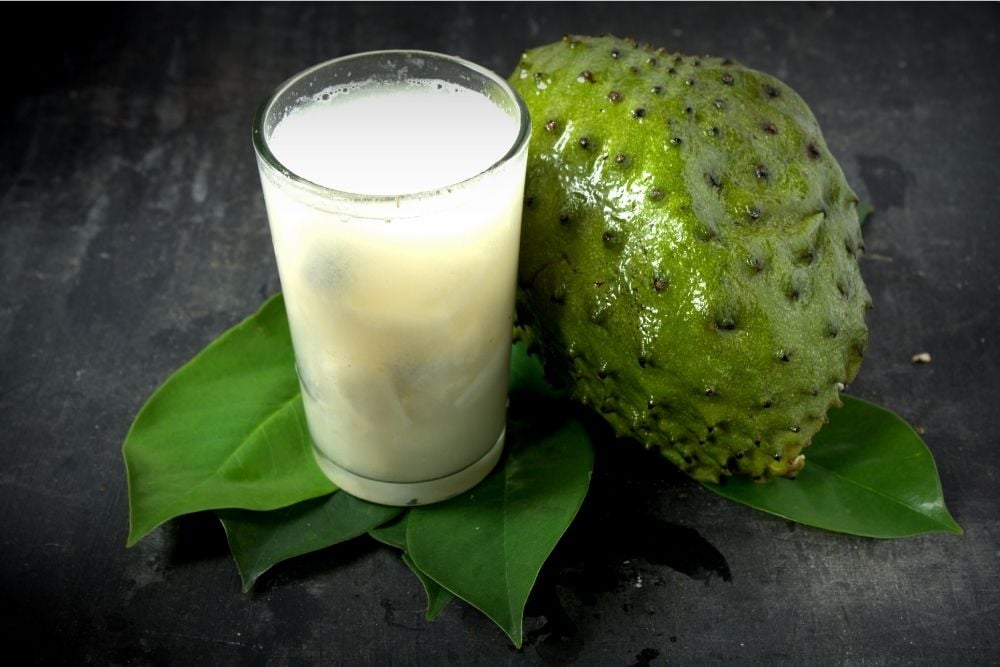 Soursop is a type of fruit also known as graviola. After being de-seeded, the fruit is blended up alongside water, sugar, vanilla extract, nutmeg, and condensed milk.

The result is a sweet, smooth drink, full of vitamins and antioxidants to help boost your immune system as well as tickle your tastebuds! 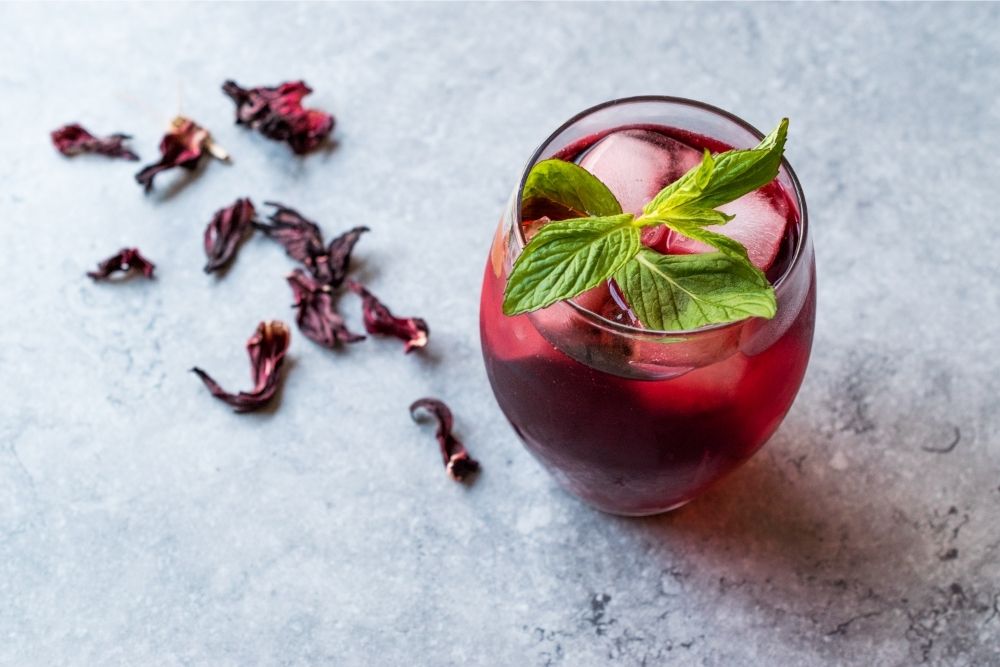 Sorrel drink is a particular favorite at Christmas time in Jamaica. The drink is made from the Roselle Hibiscus flower. The flowers are boiled in water, which should also be seasoned with pimento seeds and ginger to give it a spicy punch.

The completed drink can then be sweetened with sugar if desired or enjoyed straight away. Adding some white rum is also an option, particularly if the drink is served at a celebratory event.