People often mistakenly believe that light meat is healthier than dark meat. However, both are good sources of high-quality protein, vitamins, and minerals, so the choice really comes down to your preference in taste and texture. 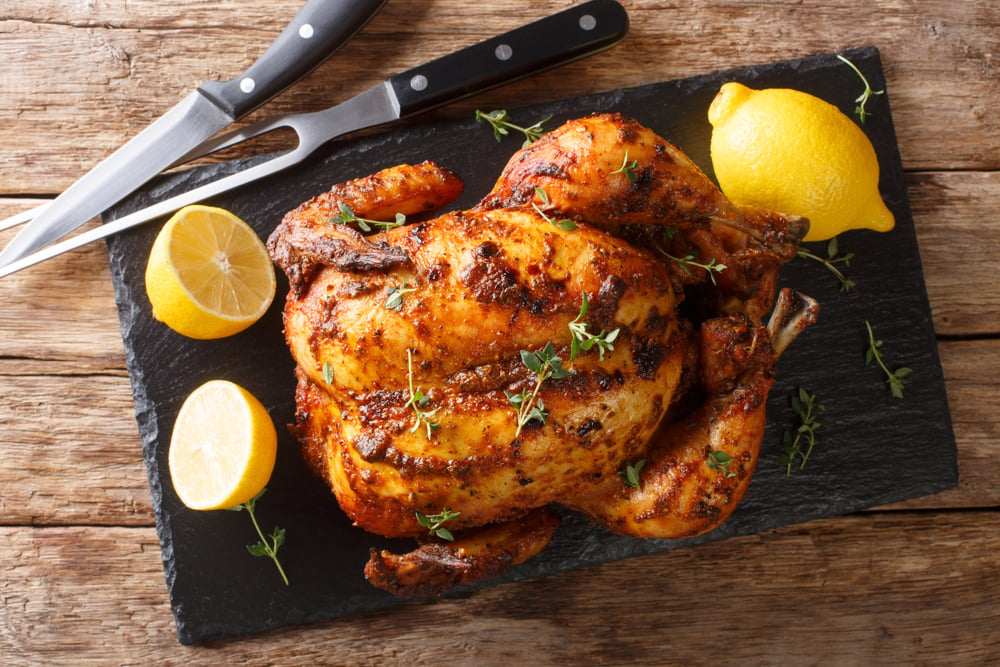 Poultry meat comes from the animal’s muscle tissue. The color and nutrient differences in dark and white poultry meat are due to the location of the muscles within the body. More specifically, they are a result of the purpose that those muscles serve for the animal.

White muscle fibers are meant to produce quick bursts of movement, such as flapping wings, while red muscle fibers support sustained activity, such as standing and walking. Because they serve different purposes, they are composed of different materials with different energy requirements. Those differences affect the color, texture, and taste of the meat.

All About Dark Meat

Meat birds spend a lot of time on their feet, pecking about and foraging for food. To sustain that prolonged movement, their leg and thigh muscles are primarily composed of what’s called slow twitch muscle or type 1 muscle fibers, which are fueled by fat.

Fat is a slow release form of energy. It takes time for the body to convert fat for use in muscles, but it is a denser fuel, which allows slow twitch fiber to sustain longer periods of action.

A chicken or turkey’s leg and thigh muscles contain a protein called myoglobin, which allows the muscle fiber to use oxygen for converting fat into energy. The high oxygen and iron content in myoglobin gives dark meat its reddish hue.

Because slow-twitch muscles rely upon fat for fuel, more fat is stored in and around these types of muscles. This is why dark meat is higher in calories and contains more than double the saturated fat found in white meat. However, dark meat also contains iron, zinc, and vitamin C. 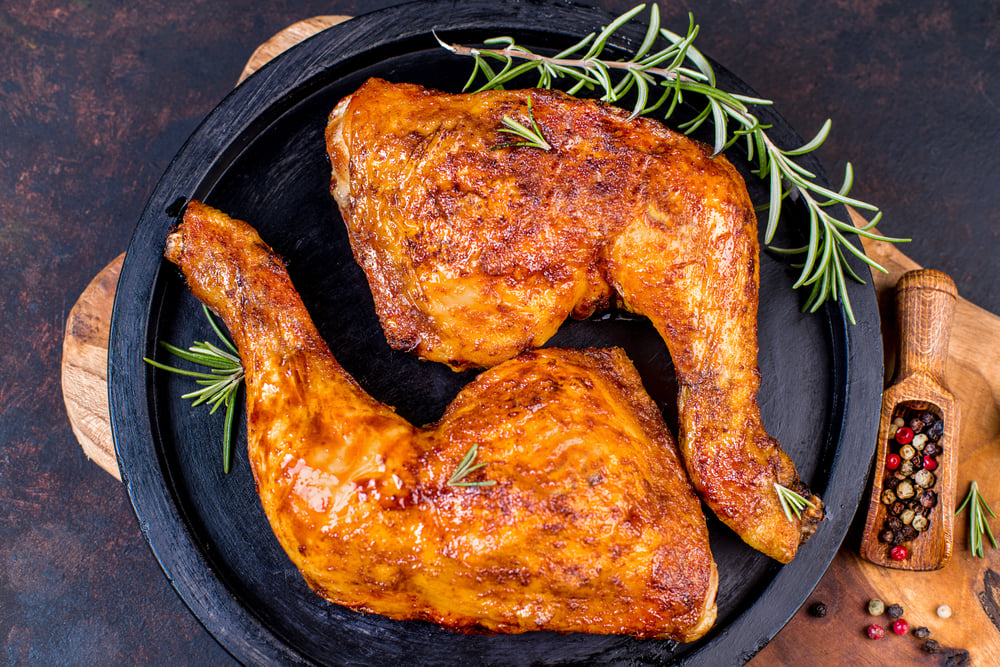 The higher fat content in dark meat chicken and turkey gives it two advantages. First, the fats melt into the muscle tissue during the cooking process, giving dark meat cuts what many consider a superior flavor. Second, because the fat melts slowly while the meat cooks, it self bastes and stays juicier than white meat does.

Another advantage of dark meat is that it is more difficult to overcook. The leg and thigh muscles are tougher because the fibers are surrounded by connective tissues. This means that dark meat can stand up to longer cook times and higher temperatures. Roasting, braising and frying are good options for making mouthwatering dark meat.

Generally speaking, dark meat is done when it registers around 175 degrees Fahrenheit on a meat thermometer.

All About White Meat

Chickens and turkeys do not do a lot of flying. Instead, they flap their wings to give them a little lift for hopping onto perches, and to defend their spot in the barnyard. In other words, they mostly use their wing and breast muscles in short, powerful bursts. That movement requires a different kind of muscle tissue called fast twitch or type two muscles.

Fast twitch muscle tissue is fueled by carbohydrates, which are easier to convert than fats, but do not provide as much energy. This kind of energy is more like a firecracker than a bonfire, and does not require oxygen or myoglobin. For that reason, white meat lacks the red color found in dark meat.

Since wing and breast muscles do not need fat for energy production, not much fat is stored in or near those muscles. This is why white turkey meat and white chicken meat contain less saturated fat and fewer calories than dark meat. However, that lack of fat also means that white meat cuts can easily dry out when cooking. 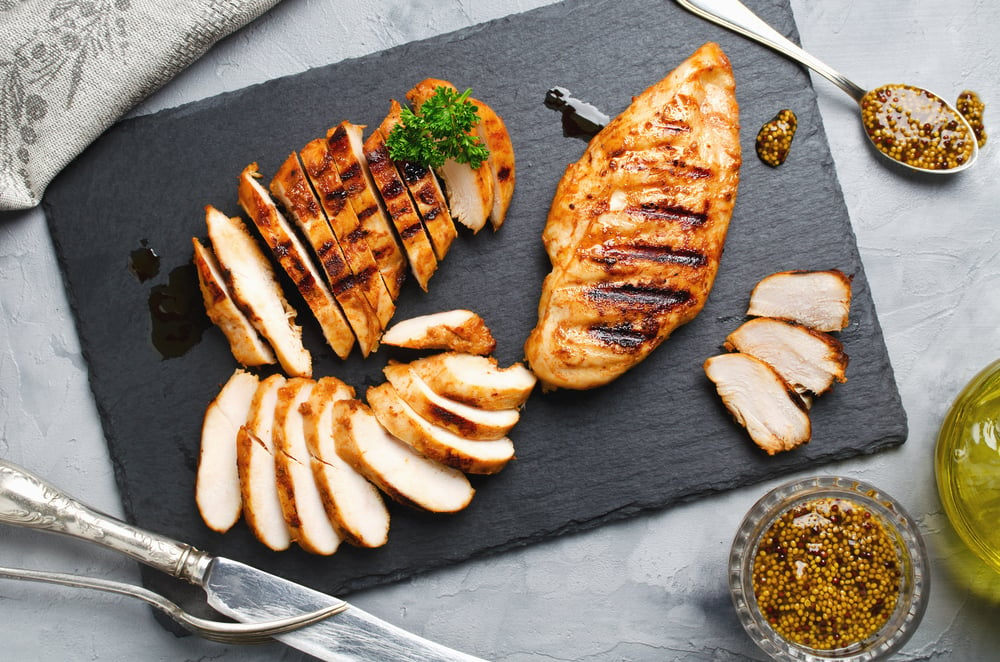 White meat is slightly higher in protein than dark meat, and contains far less fat, making it a great option for people who are concerned about weight loss or limiting fat intake. Breast meat is best when it is cooked for shorter periods, such as broiling, stir frying, pan searing, or grilling.

A high temperature and a fast sear will ensure that your meat gets a nice crispy outer crust, while the inside stays juicy and tender. Here are a few other tips for moist and tender white meat:

Skin and Bones: Boneless, skinless chicken breasts are popular at the meat market, but your meat will be juicier if you cook them with the skin and bones. They will take a bit longer to cook, but it’s time well spent.

Bones help to distribute the heat evenly as the meat cooks. They also give the meat added flavor.

Skin is high in fat. As those fats melt into the cooking meat, they moisten it. The skin also acts as a barrier that keeps the juices in while the meat cooks. If you’re watching your fat intake, just remove the skin before eating your chicken.

Uniform Size: Boneless, skinless breasts are often thicker at the top, then they taper downward to a thin point at the bottom. Because of this variation in thickness, often the thin end is dried out by the time the thicker end is fully cooked. To prevent this, cut the breast lengthwise, right down the middle, creating a front and back piece that are more uniform in thickness.

Alternatively, you can place the chicken between two sheets of plastic wrap or into a resealable plastic bag, and pound it with a kitchen mallet until it is all one thickness.

Fats and Juices: Another way to prevent drying out is to introduce juices into your chicken prior to cooking. You can do this by marinating, brining, or spraying the meat with stock or oils as it cooks.

To brine chicken breasts, pour a quart of warm water into a large bowl. Stir in ¼ cup of salt. Continue to stir until most of the salt dissolves into the water. Place the breasts in the water and allow them to sit for at least half an hour. You can place the bowl in the refrigerator and allow the chicken to continue brining for up to six hours.

Covering:  If you have seared or grilled your chicken for a few minutes on each side, but it is not yet done in the middle, take it off the heat before it loses all its natural juices. Place the meat in a pan and cover it with aluminum foil. Then, allow the chicken to finish cooking in the oven. Covering the dish will trap in the moisture and prevent drying out.

Let it Rest: Finally, always allow your chicken to rest after it has cooked. If you cut it right away, all the juices will leak out onto your plate or cutting board. Allowing the meat just a few minutes to relax will give the muscles time to redistribute the juices and hold onto them.

White meat chicken is done when it reaches about 150 degrees Fahrenheit. Always use a thermometer to ensure your food’s safety.

Now that you understand the differences between white and dark meat, and how those differences affect the flavor and cooking methods of each, you can see why it can be tricky to cook a whole bird. As anyone who has ever made a Thanksgiving turkey knows, if you cook the bird long enough for the dark meat to become tender, you run the risk of the white meat drying out. What’s a cook to do?

The best way to handle this dilemma, and the way restaurants often do it, is to deconstruct the bird. Cut into pieces, and put the dark meat into the oven to bake or roast first. Then add in the breasts and wings a little bit later so that they are perfectly done at the same time.

Another popular way to even things out is to spatchcock the bird. Essentially, this means splitting it down the middle, then opening it and laying it flat for cooking. Doing this exposes the thighs to more heat, so they cook a little faster. 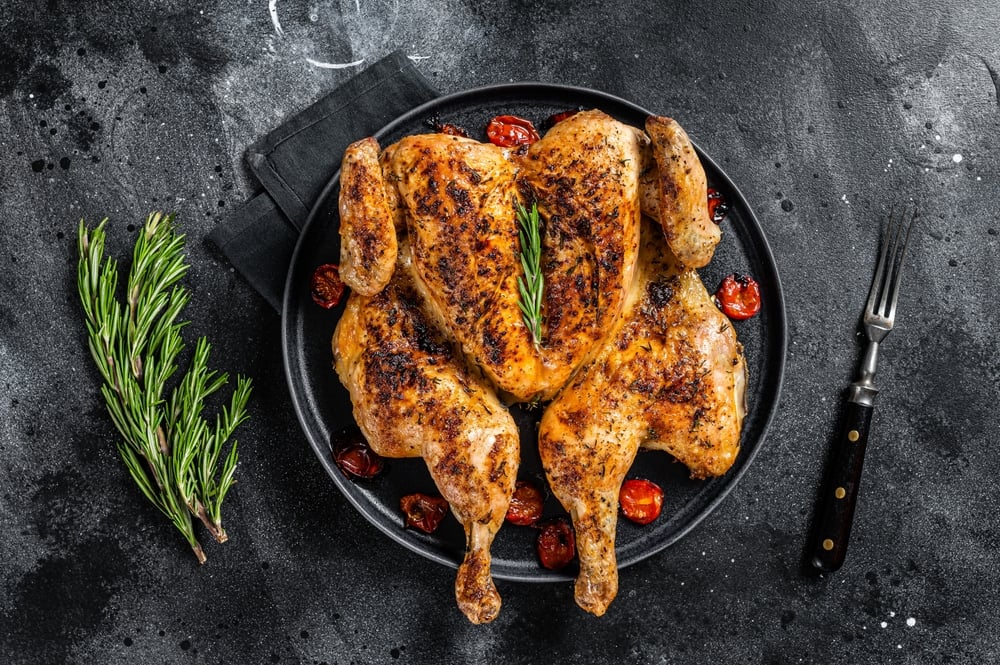 How to Spatchcock Poultry

Follow these steps to spatchcock a whole chicken or turkey:

Now your bird is ready to bake, roast, or grill!

How to Select Poultry

Whether you’re buying a whole bird, or specific white or dark cuts, there are a few important things to keep in mind while shopping for poultry meat:

Despite the rumors, there’s actually not a whole lot of nutritional differences between white and dark meat . When comparing a 100 gram serving of chicken breast to an equal amount of chicken thigh, the differences are only marginal.

The verdict? Eat a little of both to get a balanced helping of all the good ingredients in poultry meat, or just eat the one you prefer. The differences are so minimal, that it doesn’t really matter all that much.