Vodka is by far one of the most mixable alcoholic beverages in the world. And it’s not an overstatement to say that there are likely hundreds if not possibly thousands of vodka cocktail recipes out there using just about every ingredient you can imagine.

When it comes to cocktails, vodka’s like the person at parties that knows everybody. It’s a spirit you can substitute in most recipes to change things up. Not to mention, you now have all kinds of crazy vodka flavors, allowing you to get creative and craft your own custom recipes.

As for the drink itself, vodka is a very smooth liqueur with an incredibly subtle flavor which really broadens the range of drinks to make with vodka.

We mentioned earlier that you could find hundreds if not thousands of vodka drink recipes, but we’ve put together a collection of some of the best vodka cocktails.

Here are 16 of the best vodka mixed drinks you can make right at home.

When it comes to simple vodka drinks, you can’t get much simpler than a vodka tonic, folks.

Vodka and tonic are a part of the highball cocktail family of drinks that combines liquor with a larger pour of non-alcoholic mixers like soda water or tonic water.

As you’ve guessed, this drink only has two ingredients; vodka, and tonic water.

However, most folks traditionally add lemon, lime wedges, or both to their drinks for a more zesty flavor.

And if you want even more of a pronounced citrus element in your drink, you can introduce a splash or two of both lemon and lime juice.

This Vodka spritzer is another one of those easy vodka drinks you can make at home.

Spritzers are more commonly associated with wine spritzers. It’s a drink made using wine and soda water. This drink first came out of Austria back in the 19th century to create bubbly wine. The name stems from “spitzen,” a German word meaning “to spray.” And while you can make spritzer using any kind of wine, you can also make it using vodka.

A Vodka spritzer combines soda water, fruits or juices, and vodka. The concept is relatively loose, so there are tons of variations you can create for this drink.

A Vodka smash drink is an icy, fruity cocktail that often features seasonal fruits. This is a drink that’s perfect for hot summer nights (and days), and you can make it using pretty much any spirit you want. Mint is often a common ingredient used in a smash, but other recipes use herbs like rosemary as substitutes.

Now when it comes to preparing vodka smash drinks, there are a few helpful cocktail tools you’ll want to have to make the creation process much more manageable. You’ll want a good cocktail shaker and cocktail muddler for this drink.

Now, if you don’t have a cocktail shaker, a good mason jar filled with ice will do the trick, and as for the muddler, use a wooden spoon to smash your berries, mint leaves, and lime gently.

Vodka sours belong to the sour cocktail family of mixed drinks. Sours are a combination of three parts: sweetener, citrus, and liquor. There are tons of variations to the basic formula, consisting of two ounces of spirit, 3/4 ounce of sweet, and 3/4 ounce of sour.

When it comes to sour cocktails, some of the most popular aside from vodka are pisco sour, whiskey sour, gin sour, and sour tequila cocktails.

However, vodka sours are considered one of the oldest in this category and have more of a pronounced sour flavor than most other sour cocktails, which focus more on sweet notes.

For this recipe, you’ll need lemon juice, vodka, simple syrup, egg white (or you can use Aquafaba) for the white foam, angostura bitters, maraschino cherry, lemon wedge or slice for garnish, and ice cubes.

A Vodka sidecar is a unique variation of a classic mixed drink called the “Sidecar cocktail.” However, this variation uses vodka in place of brandy. If you’ve never had the pleasure of tasting a classic sidecar, you should try one as it’s one of the best classic cocktails.

The name sidecar is often linked to an American military captain chauffeured around on a motorcycle using a sidecar.

We highly recommend using superfine sugar as it makes for the best type of sugar for your rim.

White Russians are considered by many to be among the best vodka drinks in the world.

The admiration surrounding this drink has a lot to do with its unusual ingredients, such as coffee and cream.

Oddly enough, the drink was not invented in Russia but in Belgium.

The drink stems back to 1949 when the original Black Russian cocktail was created in Brussels at a hotel bar to honor the American ambassador to Luxembourg.

The Russian part of the name just stemmed from using vodka as the primary spirit. In 1955, someone in Oakland, California, began adding cream to the drink, thus creating the White Russian.

The drink’s popularity exploded when the drink was featured in the 1998 hit movie “The Big Lebowski.”

The history of the classic Bloody Mary is a bit of a mystery. However, some believe it was invented inside a Paris bar in the 1920s when a bartender started tinkering with new cocktail concepts using vodka.

The drink had a few different names when it first came out, but soon the name “Bloody Mary” stuck, referencing Queen Mary I of England.

This tall and bubbly spin on the classic Tom Collins is basically a delicious sparkling vodka lemonade. The Vodka Collins goes down just as easily as the classic, and the original Tom Collins dates all the way back to the 1870s, just about the time when cocktails were becoming all the rage in bars and saloons.

The ingredients in a Vodka Collins are Vodka, simple syrup, lemon juice, and soda water.

Now, soda water is very dry and flavorless. If you want a slightly sweeter taste, use club soda or ginger ale instead of soda water.

The Lemon Drop Martini is one of those iconic classic vodka cocktails everyone knows.

This tangy martini perfectly balances refreshing tartness and is garnished with a sugar rim plus a lemon twist.

It has a relaxed, sleek, and sophisticated vibe without being too serious like the classic martini counterpart.

And the sugar rim is an absolute must as the sweetness and tartness combine to form a delicious explosion of sweet and sour notes.

This drink always reminds me of Lemon Head candies.

The ingredients for this recipe are sugar, lemon, lemonade (homemade or your favorite store-bought), and lemon vodka.

If you’re making homemade lemonade, you can use club soda instead of water for a more bubbly drink.

Vodka Gimlet is one of those vodka drinks with a very classy, retro, chic vibe. And while gimlets are traditionally made using gin, the vodka version is a spin-off.

There’s no firm story concerning when, where, and by whom the gimlet was invented. However, a cocktail book from 1928 is the earliest record of its existence.

And there are two theories surrounding this mysterious drink’s unusual name. The first is that it was named after a surgeon named Sir Thomas Gimlette, who started serving the cocktail to sailors to ward off scurvy.

The second theory is that it’s named after a tool by the same name that’s used to drill holes into naval vessels -referencing the cocktail’s “Piercing effect.”

The ingredients for this drink are as follows: vodka, lime juice, simple syrup, ice cubs, a lime wheel, or lime zest for garnish.

If you’re looking for some easy vodka cocktails, you can’t get much easier than a vodka soda.

This light and refreshing beverage is fun and tangly and has fewer calories than most cocktails.

Vodka soda goes down smooth and easily and is a cousin to the iconic vodka tonic. However, soda makes the beverage tarter.

The vodka soda is part of the highball cocktail family and stems from the concept of watering down drinks, which has a very long history. The drink is a relative of the Gin Rickey, a cocktail devised in the 1880s. The Gin Rickey was named after a Democratic lobbyist named Joe Rickey, and the drink is a combination of bourbon and soda water.

The ingredients for vodka soda are similar; ice, vodka, club soda, and lime juice, with a lime or lemon twist as garnish.

There are tons of vodka fruit cocktails out there. However, one of the most popular involves a berry that’s otherwise not as popular as other berries.

The humble cranberry only really gets its time to shine during Thanksgiving, and that’s in the form of a strange gelatinous substance we eat with turkey and stuffing.

However, when it comes to drinks, the vodka cranberry cocktail stands as one of the most popular.

And it’s not hard to see why, as cranberries have a very distinct tartness and sweetness that balances the potent alcohol in vodka very well.

A Sea Breeze is a classic drink that’s a member of the highball family of cocktails. It’s a tart and sweet mixture that earns its name with its breezy, take-it-easy vibe.

This is the perfect drink to have with friends during happy hour, or during a light brunch, or as a nice evening nightcap. You can also mix some up for a party or just a relaxing weekend at the beach.

Plus, it’s another low-calorie cocktail that’s super simple to make.

The Sea Breeze was invented during the 1920s. However, that version used grenadine and gin. Over the years, it underwent several transformations until a juice company came along during the 1950s called Ocean Breeze.

That’s right, the version of the Sea Breeze we know today is a revamped recipe created by Ocean Spray – talk about great marketing, right?

This cocktail is made with grapefruit juice, vodka, cranberry juice and uses lime slices and cherries for garnish.

You can also add a bit of simple syrup to make it sweeter.

The taste of the ginger and mint really gives this cocktail a zippy personality that tastes a bit like a Classic Mojito.

The Cosmopolitan is hands down one of the very best vodka mixed drinks with a legendary reputation.

The very name represents high class and is a favorite in bars all over the world. This drink is informally called a “cosmo,” and the recipe calls for Absolut Citron, Cointreau, lime juice, and cranberry juice, with a lemon twist for garnish.

This vodka cocktail has by far one of the coolest names around. The Icelandic Lady is a drink made with vodka, Aperol, honey syrup, lemon juice and topped with prosecco or champagne. Garnish with lemon peel.

The taste is zesty with a rich sweetness that is very warm and celebratory.

To learn how to make even more incredible vodka cocktails, check out the video below. 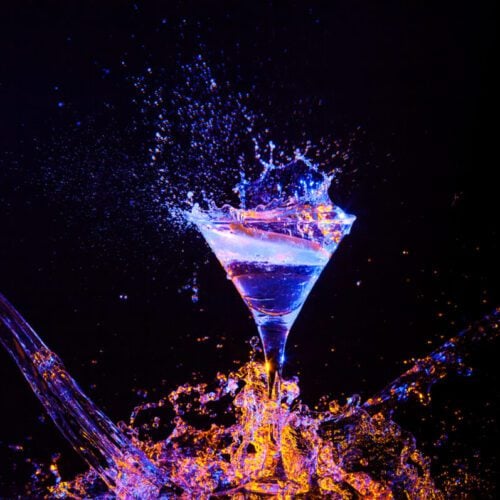 These recipes are sure to please. So, gather your family and friends and enjoy. Let us know your thoughts!
5 from 5 votes
Print Recipe Pin Recipe
Total Time 8 mins
Course Drinks
Cuisine American
Servings 2
Calories 234 kcal

Calories: 234kcal
Keyword vodka cocktails, vodka tonic
Tried this recipe?Let us know how it was!